Researchers found genetic evidence that the wolves recolonizing the Pacific Northwest are hybrids of interior wolves and a coastal subspecies. Resource managers have noted that some of the wolves show physical signs of their mixed ancestry. Photo by Chris Darimont/raincoast.org

Wolves were wiped out in Washington State in the early 20th century—the victims of bounty hunting as ranching and farming expanded in the state. Over the past two decades, however, under the protection of state and federal wildlife authorities, wolves have been reclaiming their former turf. But as new research shows, the wolves now living and hunting in Washington’s forests are different from those that lived there more than a century ago. These new wolves are hybrids—crossbreeds of inland wolves from the interior United States and a unique, beach-loving subspecies from as far north as Southeast Alaska.

The researchers who made this discovery think the hybrid wolves’ DNA could help them thrive in a changing landscape.

Conventional wisdom holds that the wolf packs slowly recolonizing not only Washington but Oregon and California are the descendants of animals that migrated west from the interior—from the mountains, plains, and forests of Montana and Idaho. But when researchers analyzed DNA samples from wolves throughout the Pacific Northwest, the results told a different story. Sarah Hendricks—now a computational biology doctoral candidate at the University of Idaho—was a research assistant at the University of California, Los Angeles when she and her colleagues amassed genetic samples from the region’s wolves. A recent analysis shows that some of the wolves have unique genetic markers that could have only come from the distinct coastal wolves of British Columbia and Southeast Alaska.

So far, the hybrid wolves are sticking to the lifestyle of their ancestors from the east. “As of right now, the wolf packs are mostly in the habitat that’s suitable for interior wolves, but we think over time they’ll begin to establish in habitat that’s more suitable for coastal wolves,” says Hendricks. As the climate continues to change, Hendricks suspects the hybrid wolves’ genetic diversity will allow them to adapt better than if they just had genes from interior wolves. 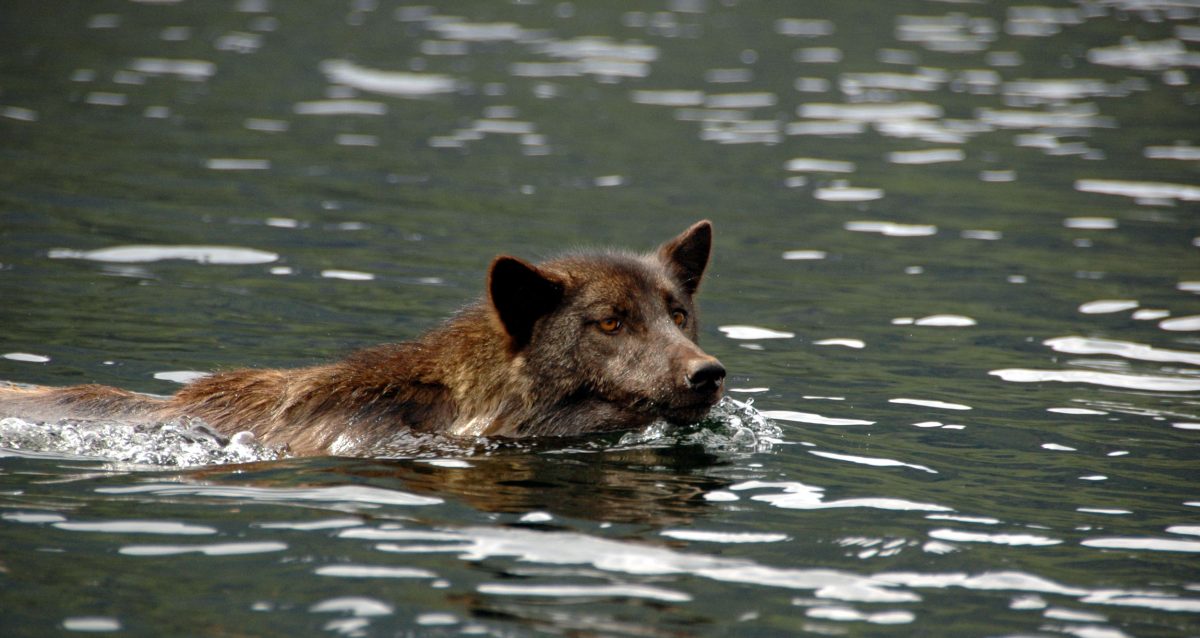 The coastal wolves of British Columbia and Southeast Alaska are a distinctive subpopulation with red-brown fur and a hunting style adapted to coastal life. Photo by Chris Darimont/raincoast.org

Even without the benefits of genetic mixing, wolves are generally quite adaptable animals, says Jay Shepherd, who leads the wolf program for the nonprofit organization Conservation Northwest. In Yellowstone Park, for instance, wolves hunt bison. These wolves are much larger than those in surrounding regions, but their size is the consequence of a diet driven by learned behavior rather than genetics. Still, he agrees that hybrids could have an advantage in areas with a mix of habitats.

The finding also offers a life preserver of a sort to the coastal wolves of British Columbia and Alaska, whose populations are dwindling in many parts of their range. For example, Hendricks points to a population in Southeast Alaska that is declining quite drastically. The hybrids may serve as a genetic reservoir, protecting some of the coastal wolves’ distinctive traits.

But while the hybrid wolf population may act as a reservoir, there could be complications if the Alaskan coastal wolves became protected under the United States Endangered Species Act. In that case, wildlife managers in the Pacific Northwest would find themselves charged with managing wolves that share genetic traits with federally protected animals. “The problem is that the Endangered Species Act doesn’t have a lot of language regarding how to deal with hybridization,” says Hendricks.

Hendricks hopes her findings will inspire biologists and policymakers to focus on sorting out the unanswered legal question of what should be done when the ancestor of a hybrid animal is an endangered species, whether these mixed-lineage descendants should be protected as well or left vulnerable to hunting and habitat loss. Either way, she thinks the hybrid wolves’ mixed heritage will be an asset as they continue to reclaim their species’ old haunts across the Pacific Northwest.