Diving seabirds such as common guillemots tend to have high hunting success at the boundary between mixed and stratified water. Photo by Andy Trowbridge/Minden Pictures

Seabirds and other ocean predators know the hunting is best at the subtle boundary between mixed and stratified water. Diving seabirds forage for prey at these intersections, as do certain fish and cetaceans. Researchers have known this for decades, too, but it’s never been clear why these boundaries—known as tidal fronts—are good places to hunt.

To investigate why hunting seabirds seek out tidal fronts, James Waggitt, a marine ecologist at Bangor University in Wales, and his colleagues crisscrossed the northern Celtic Sea in a boat and counted diving seabirds of two species: the common guillemot and the Manx shearwater. They recorded how often they saw the birds plunging into the water to hunt or resting on the surface. They also measured the abundance of fish and used the water’s depth and the speed of the current to map where the ocean was likely to be stratified or mixed.

The researchers found that in mixed water, shoals of fish were big and close to the surface—both good things for a diving predator. Yet these large groups of fish were rare; finding one would be difficult. In stratified water, by contrast, fish shoals were more common, though the fish swam deeper and in smaller groups. Neither water type was perfect from a seabird’s perspective.

“But at the interface of these two water bodies,” Waggitt says, “you tend to get the best of both worlds.” Within the tidal front, mediumly abundant, medium-sized groups of fish swim at medium depths. 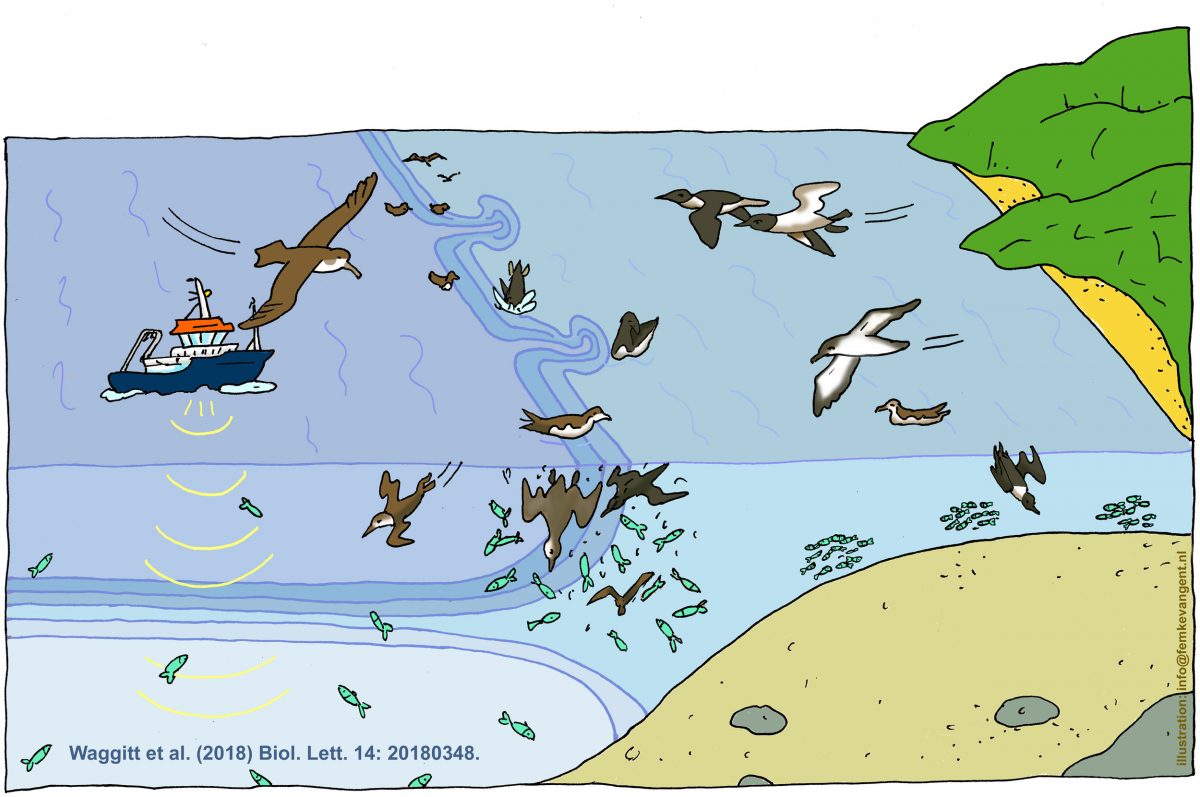 Fish tend to congregate in schools of different sizes and swim at different depths depending on the conditions in the water. These differences in fish behavior affect the success of predatory diving seabirds. Illustration by Femke Vangent

Waggitt speculates fish behavior within tidal fronts may also factor into the seabirds’ hunting success. “Perhaps when they’re moving between the two water bodies, the behavior of the fish is changing,” he says. Perhaps the shoals become disorganized when transitioning between habitats, for instance. Or, they may pay less attention to predators.

Jonathan Green, a seabird biologist at the University of Liverpool in England who was not involved in the study, says the work “definitely adds insight into how and why predators such as seabirds use tidal fronts.” Many studies have shown the pattern of predators hunting at these boundaries, he says, but few have given insight into why.

Predators at the tidal front, however, may face a future where prime hunting spots are less fruitful than they once were. Waggitt says renewable energy infrastructure, such as wind or tidal turbines, can change the speed of currents or the properties of the seabed and alter ocean stratification patterns around these installations. Tidal fronts could shift, and if seabirds don’t shift their behavior in response, they might start coming up dry.