This alumina refinery, located in St. James Parish, Louisiana, is one of many industrial complexes that have given rise to the region’s nickname, Cancer Alley. Photo by Erica Cirino

Beneath a searing Louisiana sun, a crowd gathers on a former sugar cane plantation to commemorate Juneteenth, a holiday celebrating the end of slavery in the United States. Rows of unmarked graves stand nearby—believed to be the resting place of those who’d been enslaved on the plantation. A few people, clad in face masks, hold up a banner: Honoring Our Ancestors. Another sign, staked into the grass, is aimed not at the past, but at the future: FORMOSA: YOU ARE NOT WELCOME HERE.

Since 2018, this land in Welcome, Louisiana, has belonged to FG LA LLC (FG), an affiliate of Taiwanese manufacturing conglomerate Formosa Plastics Group. Here, the company plans to build a nearly 1,000-hectare, US $9.4-billion plastics factory known as the Sunshine Project. Forecasts project that the factory will release substantial plastic and carcinogenic pollution into a region already known as Cancer Alley.

Sixty-eight-year-old Sharon Lavigne, a retired teacher and lifelong resident of Welcome, a town of 800 in St. James Parish, has seen businesses and residents leave the area as industry has moved in. Her neighbors and family have grown ill, she says, from exposure to industrial pollutants. In 2018, she founded RISE St. James, a faith-based grassroots organization that works against racial and environmental inequality, to give her community a fighting chance.

Her call comes at a time when Black Americans are suffering disproportionately due to the ongoing coronavirus pandemic. Long-term exposure to air pollution seems to be an important contributor to COVID-19 deaths, and though Black people comprise just 32 percent of Louisiana’s population, they make up 70 percent of the state’s COVID-19 deaths to date. 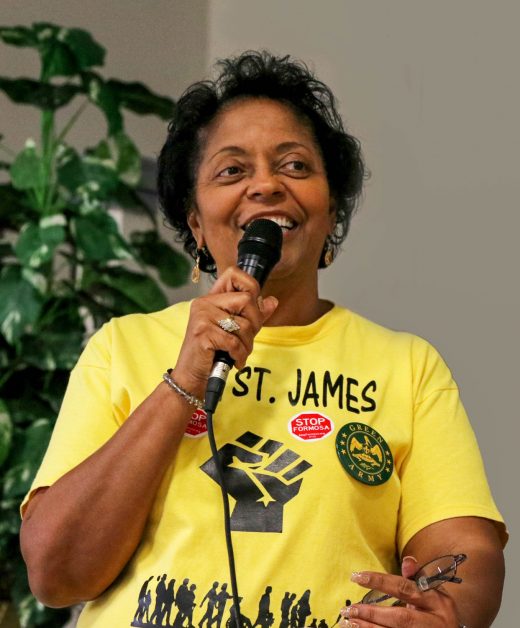 Sharon Lavigne, the founder of RISE St. James, speaks out about a proposed plastics factory at a community meeting held in Welcome, Louisiana, in March. Photo by Erica Cirino

Over the past 100 years, predominately Black communities along the lower Mississippi River have seen a concentration of industrial development, with many complexes built on or near former plantations in fence-line communities like Welcome.

“The intentional placement of industry here, and the poisoning of our community, reflects a racist society,” Lavigne says. “But guess what: the air doesn’t stop at the parish lines. If we stop industry here, we can reclaim St. James [Parish], but also other communities in Cancer Alley.”

According to an investigation by ProPublica, emissions from the new plastics plant will more than triple residents’ exposure to cancer-causing chemicals. The plant will double the region’s toxic air emissions, and spew more than 12 million tonnes of carbon dioxide into the air each year. Residents of St. James Parish, who already live within a 16-kilometer radius of 12 petrochemical facilities, have an above-average cancer rate and are frequently subject to boil-water advisories.

In February, RISE St. James and other advocacy groups appealed the decision by the Louisiana Department of Environmental Quality (LDEQ) to approve FG’s air permits for the plastics factory. The appeal asserts that the pollution projections put forward by FG and approved by LDEQ were not grounded in science. They also charge that the department failed to address the concern that FG would be building its factory on top of the presumed slave burial grounds.

RISE St. James and the other plaintiffs are calling on the court to nullify FG’s permits, and to require the state to reassess the factory’s pollution limits. Such a step would stop FG from moving forward, at least temporarily.

“This blatant disparity in pollution burden in this community should be enough of a case for a lawsuit,” says Kimberly Terrell, a biologist and the director of community outreach at Tulane University’s Environmental Law Clinic in Louisiana.

“Lawsuits cause major headaches for companies trying to get permission to build,” Terrell says. “It’s usually easier to stop a factory that’s planned rather than one that’s already been built and is trying to renew or expand.”

The appeal may require LDEQ to assess the factory’s expected emissions and pollution control measures more stringently, says Terrell. That’s useful, she adds, because if St. James Parish residents can’t stop the factory from being built, they at least want to ensure the factory is operating as cleanly as possible.

Janile Parks, FG’s director of community and government relations in Louisiana, contests the appeal. She says the company’s emissions models accurately project that pollution levels from the factory will fall within state and federal standards. FG, she says, “takes environmental and safety concerns about the Sunshine Project very seriously.”

But Formosa’s track record tells a different story. The conglomerate, which runs more than 30 companies spanning petrochemical processing, electronics production, and biotechnology, has been accused or found guilty of polluting in every country in which it operates.

In Point Comfort, Texas, a working-class port community, for instance, Formosa operates a plastics complex comparable in size and design to the factory proposed for St. James Parish. There, Formosa’s biggest opponent has been Diane Wilson, a fourth-generation shrimp boat captain who has spent more than 30 years documenting the company’s pollution, and challenging it in court.

Wilson’s efforts include a 1994 lawsuit that saw Formosa agree to not discharge any plastic from its Texas facility—a promise the company ultimately failed to keep. Wilson collected thousands of bags of plastic emitted from the facility’s outfall pipes, evidence that was ultimately used to garner a $50-million settlement in the largest Clean Water Act lawsuit ever filed by private individuals. Now, Wilson is collaborating with St. James Parish residents to stop Formosa’s latest development.

Later that month, coronavirus shutdowns and fluctuating water levels in the Mississippi River forced FG to put its construction plans on hold. Opponents of the project, however, are not letting up.

“We are St. James Parish,” says Lavigne, speaking at the gathering. “This is our home. We aren’t going anywhere. Formosa has a fight on its hands.”