Water that once flowed down the Slims River takes its new path south toward the Kaskawulsh River. Photo by Dan Shugar/University of Washington Tacoma

The heist went down right under his nose. The water that once flowed north through southwestern Yukon, powering the mighty Slims River, was cut off and rerouted south. Where fresh glacier water once streamed through the landscape, there is now little but dust. In less than a year, the life-bearing water was redirected. And the area’s largest lake, an important spot for fishing, no longer has a source.

Dan Shugar is an expert on river piracy, but this is the first time he’s studied it in real time.

“Nobody’s ever witnessed it before,” says Shugar.

In this case, the culprit was not industrialists or agriculturists looking to redirect the water for their own gain. This time, says Shugar, a geologist at the University of Washington Tacoma, the cause was something much larger.

Shugar says the theft had been in the works for more than 100 years. But in the spring of 2016, something tipped and a river was whisked away.

So what, exactly, happened?

In southwestern Yukon, 2016 was a particularly warm year, and the Kaskawulsh Glacier—known to the local Southern Tutchone First Nation as Tänshı̨̄—was in sorry shape. The glacier normally fed the Slims River (or Ä’äy Chừ), which flowed northward into Kluane Lake, continued into the Kluane River and, eventually, the Bering Sea. But the mass of the glacier itself had created a topographic divide, which disappeared as the ice shrank. Last year, its leading edge had retreated to a point where the land sloped steeply southward. The meltwater, which would normally flow north into the Slims River, went down this new path, into the Kaskawulsh River, instead.

“Water that should have gone out the Slims River actually carved its way through this thin, decaying toe of ice,” says Shugar, who detailed the mechanics of the collapse in a recent paper. And as the water disappeared from the Slims, it had a big effect on the watershed. 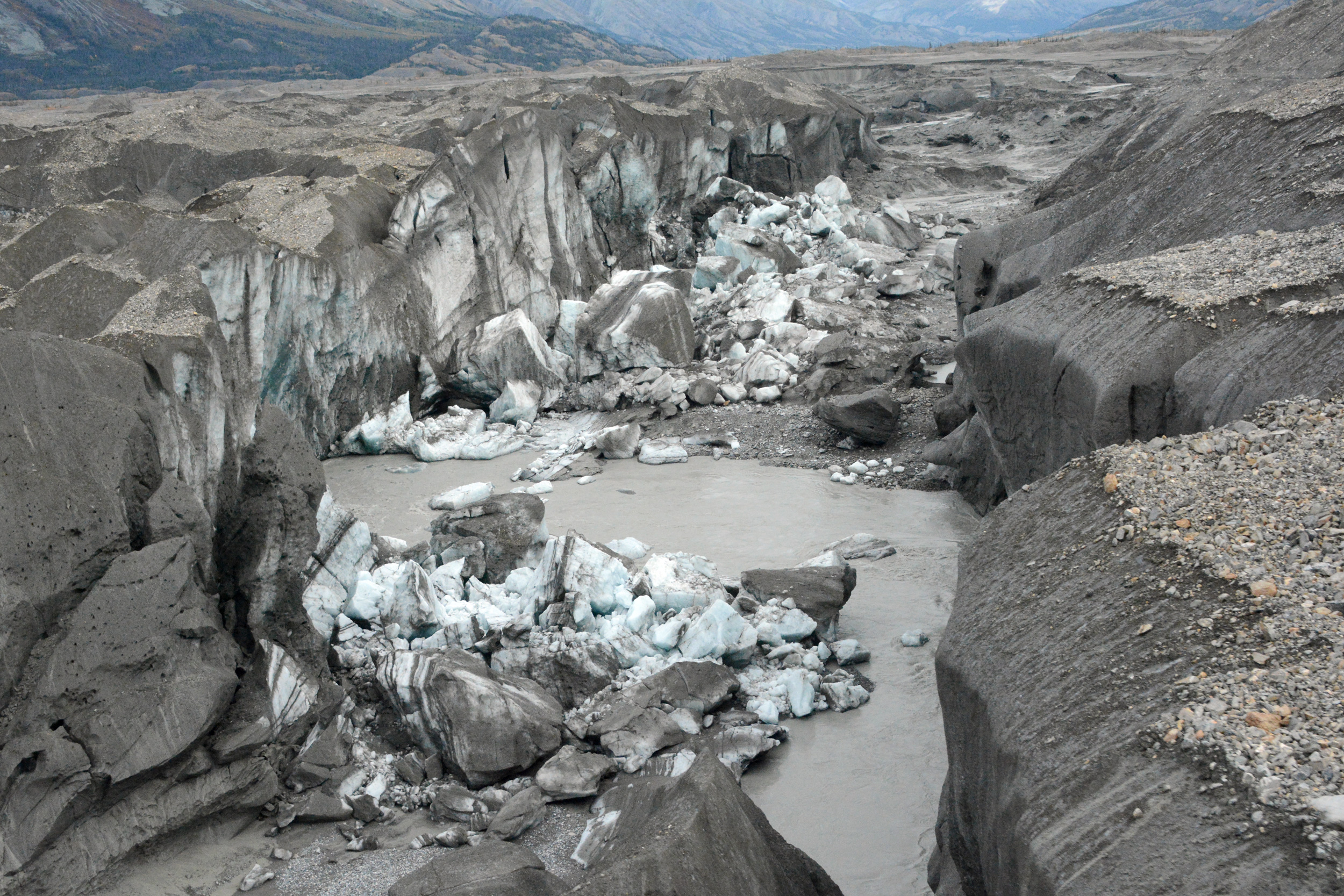 Meltwater has broken through the weakened ice of the Kaskawulsh Glacier. Photo by Jim Best/University of Illinois

Most pressingly, Kluane Lake—which was fed by Slims River—no longer has a water source. As a result, the lake’s water level is dropping.

It’s not clear yet how low the lake will go, but if the water level falls too far, it could eventually become cut off from its own outflows, which would be devastating for the local wildlife, says John Clague, a geologist at Simon Fraser University. In 2006, Clague actually predicted that the Kaskawulsh River would eventually capture water from the glacier at the expense of the Slims River. He just couldn’t predict when.

“Slow climate change can bring us to a threshold where impacts on humans are unprecedented and fast,” Clague says.

The community’s concerns about the dropping water level in Kluane Lake are varied. “I’m concerned about fish contaminants,” says Ballegooyen. “Now that we don’t have a fresh water source coming into the lake, contaminants that are going to enter the lake will not be flushed out very easily.” This could lead to higher concentrations of contaminants, such as mercury, getting into the fish.

She’s also worried about traditional ice fishing grounds because as the water gets shallower, it might freeze all the way to the lakebed. “If you drill through the ice now, you might not reach water in the wintertime,” she says. That’s a big threat to food security in the region, where many Kluane people rely on trout and whitefish for food. 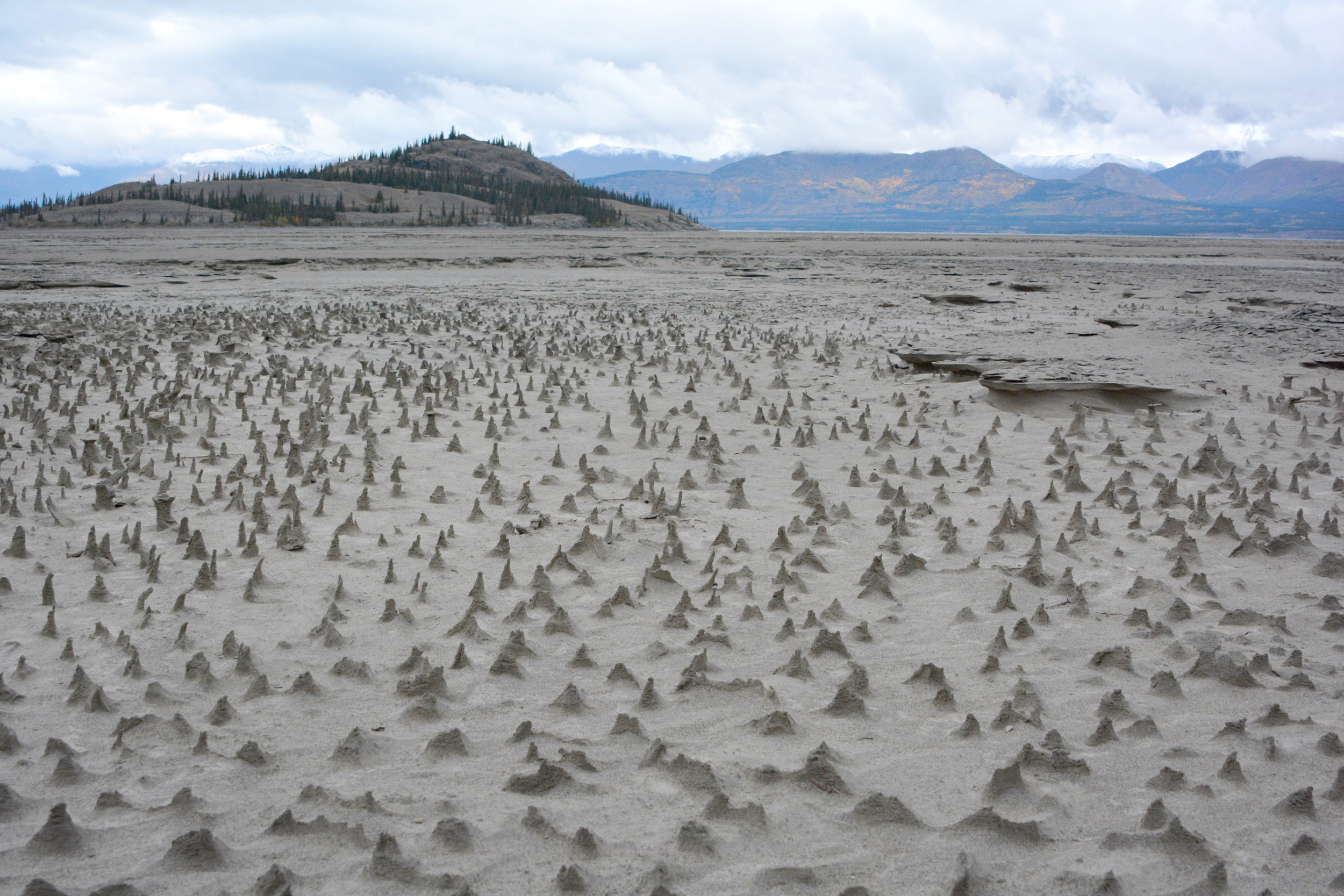 The water level in Kluane Lake has dropped so sharply that parts of its bed are now exposed. Photo by Jim Best/University of Illinois

Elsewhere, wells are drying up and, as Clague foretold, the lake’s outflow to Kluane River is beginning to diminish. The river has become shallower and filled with sandbars. Meanwhile, the desiccated Slims River—a waterless riverbed—now provides an unwelcome addition to the landscape: dust.

“The levels of dust coming off the Slims is astonishing,” says Ballegooyen. “There are huge dust storms that kick up.” But, she adds, if anything positive has come from having their river stolen, it’s that people are paying attention to the sudden change.

This isn’t the first time retreating ice has rerouted Canada’s watersheds. As large ice sheets retreated during the last ice age, the sudden filling and emptying of lakes and rivers shaped much of the landscape, from the escarpments in southern Manitoba to the St. Lawrence River, says University of Saskatchewan hydrologist John Pomeroy.

But “it’s a rare event to see it on a massive scale like this,” he says. As other glaciers continue to retreat, Pomeroy says we need to be vigilant. “The nature of the change is something that a normal climate model or hydrological model would never pick up on.”

It’s a stark reminder that for all the predicted impacts of climate change, there are many that we won’t see coming.

Shugar can’t say if this is likely to happen in any other places, but that this very unpredictability is a wake-up call. “It’s one unanticipated consequence of climate change that is happening now. It’s not going to happen 50 years from now. It happened.”