Two lionfish are successfully caught by the Frapper Trap during a trial at the team’s testing facility. Photo by Team Frapper

Maria and Bob Hickerson saw their first lionfish on a diving trip in Jamaica in 2009. When they spotted it, they hurried over before this unfamiliar specimen could swim away. But instead, the fish seemed to pause.

They took photos and told the dive operator about the fish. He asked for details about where they spotted it.

The US National Oceanic and Atmospheric Administration speculates that home aquarium owners dumped unwanted lionfish off the Atlantic coast around 30 years ago, starting an invasion that continues to grow. A native of the Indo-Pacific, the spined fish has spread from North Carolina to the Gulf of Mexico, throughout the Caribbean, and along the Brazilian coast. With no natural predators, a wide-ranging diet, and quick reproduction rates, lionfish are poised to overrun ecosystems and undermine the tourism and fishing industries.

Not long after that dive in 2009, the Hickersons started spotting lionfish off the east coast of Florida, where they live. Determined to do something, the Hickersons, who worked as a general contractor and dive instructor, got involved in fighting the invasion. They developed tools, starting with the Frapper, a small, compact spear that they both used and sold. They decided a trap, one that could hold many lionfish and go deeper than divers, would be a good addition to their arsenal.

That idea grew into the Frapper Trap. The Hickersons tested out multiple shapes and sizes to make their trap housing appealing to lionfish. But the real advance came from Maria’s father, computer scientist Gonzalo de la Peña Casares, who suggested adding artificial intelligence to the mix.

What de la Peña Casares came up with was a computer vision algorithm, a subset of machine learning and artificial intelligence. The trio came up with a credit-card-sized computer to go in a waterproof housing attached to the trap, which now had a two-part design. When marine life swims into the first section of the trap, a gate closes behind it. A camera takes multiple photos, which the computer compares against images of lionfish and other marine life. If the captive is not a lionfish, the gate reopens and it can swim away. If it is a lionfish, a different gate opens—this one leading to the main enclosure. Driven by machine learning, the algorithm gets better at recognizing lionfish with each encounter. 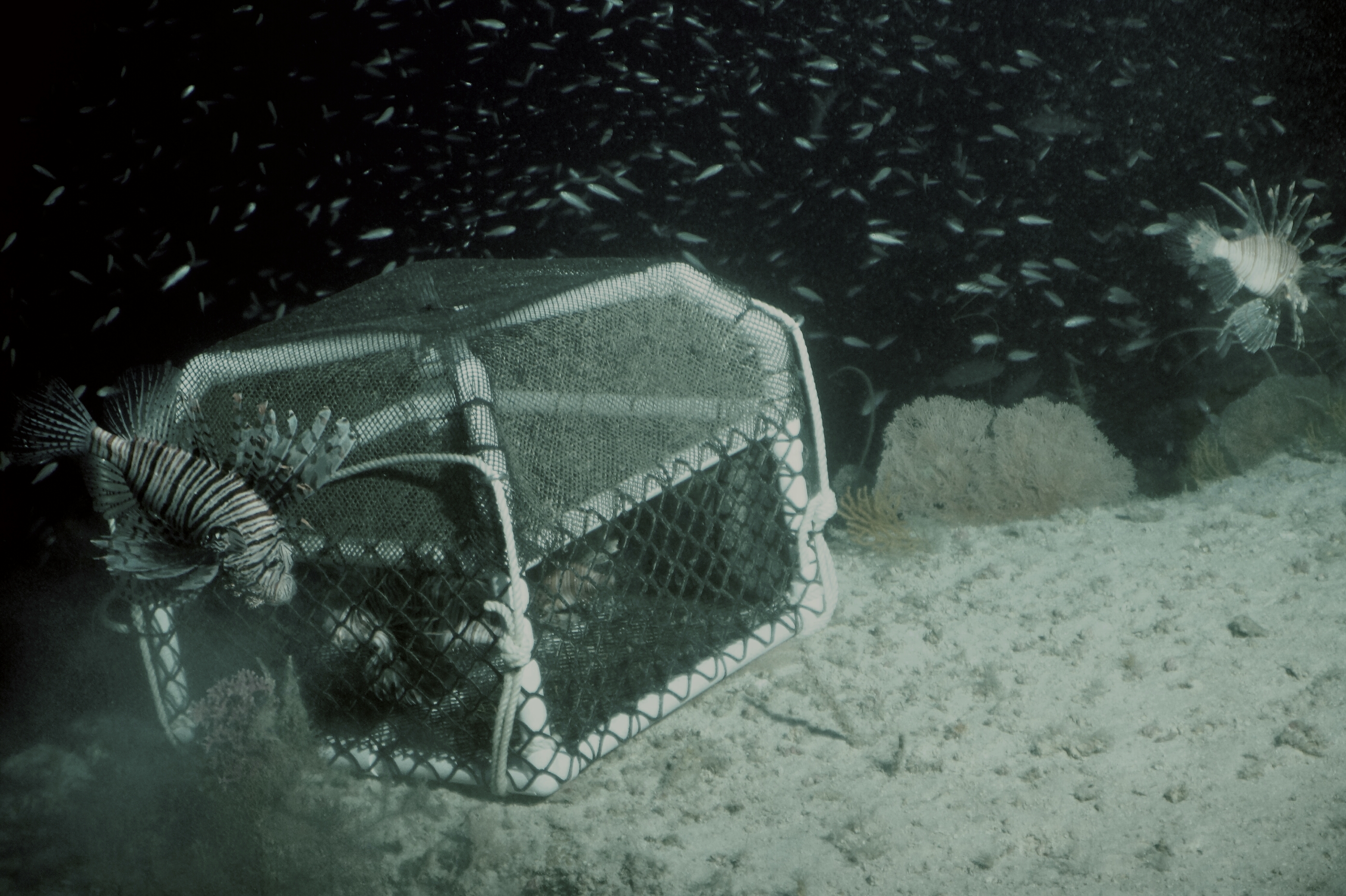 Lionfish investigate a trap in Curaçao. Photo by Substation Curaçao

Artificial intelligence is already making its way into everything from cellphones to cars, and conservationists are now testing what it can do for them. Other projects have used facial recognition to categorize whales and track fish stocks.

Unlike Google and Facebook, conservationists don’t always have access to the massive data sets often required to effectively drive artificial intelligence and machine learning. De la Peña Casares, however, built the algorithm to recognize the silhouette of a lionfish with just over 800 images, a small amount compared to the thousands or millions of data points often used. The Frapper Trap gets away with such limited data as there are only so many types of marine life that occupy the same space and region as the lionfish, so the algorithm doesn’t need to know every fish in the sea. Bob says the only concern was that the spiny lobster, which resembles the lionfish, might give the algorithm some trouble, but so far it has had no problem differentiating the two.

Other organizations combating lionfish have been eager to join in. The Hickersons got a two-year grant from the US Geological Survey to test the trap first in a saltwater tank and then in open waters. Carole Baldwin, a research zoologist at the Smithsonian, took two prototypes out on a fieldwork trip off the coast of Curaçao. Those trials have focused on the trap housing itself, while field testing of the electronics and the selection algorithm will come later.

The Cayman Islands Department of Environment is also interested in trying out the Frapper Trap in its marine protected area and the Nature Foundation St. Maarten is exploring working with the trap’s technology. They want to figure out a way to add the technology onto watermen’s traps, and then pay them to capture lionfish in their off-season.

The main holdup is funding, which the Hickersons are trying to solve with an online fundraiser. Once they have the money, lionfish could find themselves faced with a new predator: artificial intelligence.