Computer models are increasingly adept at predicting the likely effects of climate change on the environment, but even the most sophisticated algorithms are only as good as the real-world data used to build them. And that data—including actual observations of how plants, animals, and microbes will cope with the changing conditions—is largely lacking for marine environments, which prove stubbornly difficult to experimentally manipulate.

As new research shows, the lack of direct observation is a problem. In a first-of-its-kind experiment, researchers tweaked both the temperature and carbon dioxide concentration of tide pools along the Alaska coast. What they discovered defied their predictions.

“These findings really exemplify how complex the marine system is,” says Cascade Sorte, an ecologist at the University of California, Irvine. “Its response really depends on the particular combination of carbon dioxide and temperature.”

Sorte and colleague Matthew Bracken conducted their study on Japonski Island in Alaska, where they experimentally manipulated 20 tide pools along the island’s rocky shore. Tide pools received either more carbon dioxide; more heat; or more of both; while others served as controls, receiving neither. Both the temperature increases and carbon dioxide additions were within ranges that occur naturally in the study site, but they were sustained for longer periods than is currently typical.

While terrestrial ecosystems have received plenty of experimental attention with regard to climate change, the world’s marine counterparts have been largely overlooked—mostly because of logistical challenges. It’s much easier to heat air than water, and pumping carbon dioxide into the ocean is very costly and hard to do on a large scale. 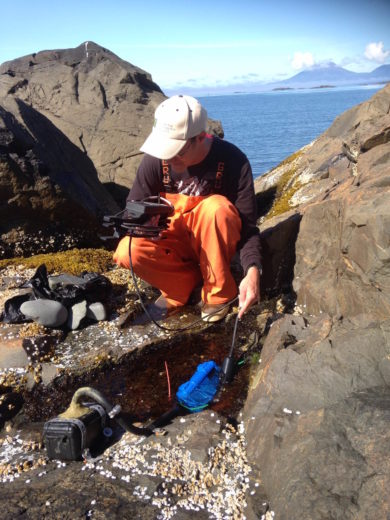 Researcher Matthew Bracken tests the oxygen concentration of a tide pool. Nearby, a blue heater and black yeast reactor are used to manipulate the temperature and carbon dioxide concentration of the water. Photo by Cascade Sorte

The contained tide pools helped Sorte and Bracken get around these challenges. They used battery-operated warmers to furnish heat, and yeast reactors—waterproof boxes containing activated yeast, similar to the type used in baking—to provide a stream of carbon dioxide. When fed with sugar and water, the yeast produced carbon dioxide, which bubbled into the pools through a tube.

The experiment lasted just 16 days, but that was enough time for the researchers to notice significant differences between the pools. “What really surprised us was how quickly the system responded,” Sorte says.

Productivity, measured by how much oxygen was present in the water, more than doubled in warmed pools, and the physiology of the most abundant seaweed species living there, red algae, also changed, with its carbon-to-nitrogen ratio going up. The pools that received both warming and carbon dioxide, however, showed no differences, indicating that the excess carbon dioxide somehow depressed the warming effects.

The results demonstrate that understanding climate change requires a holistic approach. Focusing on the ways that just warming or just carbon dioxide or just ocean acidification affect organisms and the environments isn’t enough.

In the coming months, Sorte and Bracken hope to reproduce their experiment at sites up and down North America’s west coast, and to keep those treatments going for a longer period of time. “That will provide us with even better answers,” she says, “so stay tuned.”