The sea otter population in the northeast Pacific is rebounding quickly. But at the heart of conservation planning is a key question: how many sea otters is the right number of sea otters? Photo courtesy Markus Thompson

The maritime fur trade, beginning in the 1700s and centered on the North Pacific Ocean, killed around one million sea otters and left the species fluttering on the verge of extinction with a global population as low as 1,000. On the west coast of Canada, the animal didn’t make it. The last sea otter was seen in the region in 1929, off Vancouver Island, British Columbia. But beginning in the 1960s, restoration efforts have turned back the clock on British Columbia’s sea otters. From an initial 89 sea otters relocated from Alaska, a population of 8,000 is now expanding in the province. Yet after generations of their absence, the surge in sea otters is stoking the resentment of some residents.

The trouble is, a sea otter consumes 25 to 30 percent of its own body weight every day. The otters’ voracious appetite can have dramatic ecological effects. It doesn’t help, either, that sea otters eat many of the same seafoods that humans in the area have long favored, such as crabs and clams, sparking conflict with shellfish fisheries and leading some to argue that the reintroduction effort has worked too well.

Now, a new study suggests that conservation efforts may have indeed overshot the mark—and the reason why is particularly interesting.

When thinking about restoring natural ecosystems, the goal for many would likely be to see a species rebound to its carrying capacity—that is, the maximum population a given habitat can support, free from human impact. So, for the sea otter, that would be to roll back the effects of colonization, the commercial fur trade, hunting, land development, and other pressures to a time when abundant sea otters may have dwelled on the coast, gorging on abalone and other shellfish. But taking that as your goal is to overlook the way Indigenous peoples extensively managed the sea otter population for thousands of years.

Led by Erin Slade, a graduate student at British Columbia’s Simon Fraser University, new research examining the sizes of mussels found along the coast challenges the assumption that late-Holocene sea otter populations would have ever been at, or even near, their carrying capacity.

Slade, who is supervised by Simon Fraser University ecologist Anne Salomon and anthropologist Iain McKechnie* from British Columbia’s University of Victoria, measured the sizes of mussels at six locations on the contemporary coast of British Columbia and found that, in places where the expanding population of sea otters has yet to arrive, mussels are larger. On select British Columbia central coast sites without sea otters, for instance, mussels are 16 percent bigger than in areas with sea otters, while on south coast sites they are up to 47 percent bigger. Seeing that mussel sizes can be used as a proxy for the relative abundance of sea otters, the team turned their sights back through time.

Mussel shells are relatively common in the archaeological record. Though they are often found shattered and fragmented, the strong, hard umbo where the valves join together often persists intact. Measuring the thickness of the umbos of mussels found at six sites dating from 2,700 to around 6,000 years ago, the team found mussels as large as those from modern sites with no otters at all. The finding suggests that otters may have been deliberately kept out of human settlement areas, with hunters targeting them to preserve their own access to shellfish, while otherwise leaving them to thrive among the kelp forests.

But recognizing the role that Indigenous people played in managing healthy ecosystems—including through hunting—is an area where conservationists with a Western, settler perspective have work to do.

As a species of special concern, sea otters are managed by Fisheries and Oceans Canada (DFO). The scientific group that advises DFO recently calculated that a reasonable annual biological take, or removal, for the sea otters on the BC coast would be about 500. 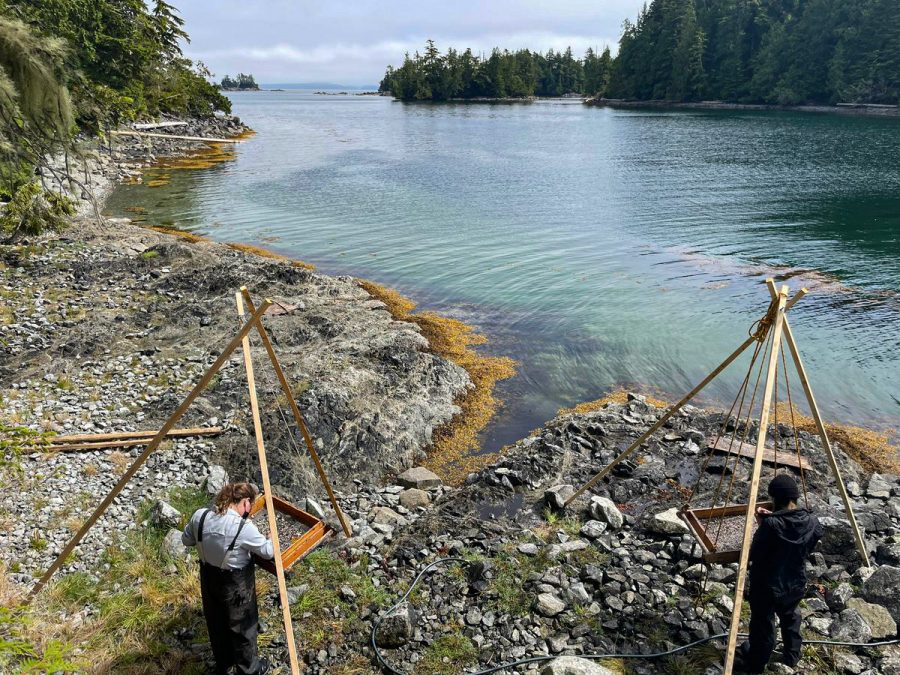 The realization that historical sea otter populations were likely much smaller than assumed stems from analyses of mussel shells. Photo courtesy of Slade et al.

What’s interesting about that number is that it was calculated using a formula that requires those punching in the numbers to choose a so-called recovery factor, a value that can range from zero (no recovery) to one (fully recovered). Some conservationists take this recovered state to mean the restoration of a pre-human population. This use of the formula, and the goals it generates, aims for some Edenic, pre-human sea otter population that likely never existed, as sea otters are thought to have arrived in the Americas at roughly the same time as humans—after the opening of the glacial ice near the Bering land bridge.

Based on DFO’s 500 number, Indigenous groups can apply to hunt small numbers of sea otters for food and ceremonial purposes, but it’s not nearly enough to keep the animals away from the seafood on which those communities rely for their livelihoods.

“The number is applied blanketly across the coast, so it’s really different from the very specific spatial management that used to happen in the past,” says Salomon. “This is not a hunting debate. It’s about recognizing humans as part of a place.”

“There is a parallel between the coexistence of otters and people on the one hand, and [the] coexistence of Indigenous managers and conservation managers on the other,” says McKechnie. “There needs to be some reconciliation of coexistence in management outlooks, because Indigenous communities are fighting for their livelihoods on this point.”

Recognizing this integral role of Indigenous peoples in the story of the sea otter, the Coastal Voices project is bringing together Indigenous leaders and knowledge holders, scientists, and artists in British Columbia and Alaska to address and plan for the return of the sea otters, with its myriad ecological and social effects. They have collected their perspectives online as a resource for decision-makers and the public.

“We should have a say in how we manage things. We live here, [sea otters are] part of our lives, and we know them,” says Walter Meganack Jr., the Alutiiq chairman of the Port Graham Corporation in Alaska, who took part in the Coastal Voices project. “Who better to manage something than the people where it means something to them, [rather] than the government where it’s just numbers. With the government it’s always just numbers. It’s sad, but that’s what it comes down to.”