Banana fiddler crabs attract females by waving their big yellow claws—hence the name banana—and then drumming them on the ground. They are not, however, very discriminatory about which females they attract. Photo by Pat Backwell

Rising sea levels are pushing different species of fiddler crabs together, and their interactions may cost one species vital territory.

Most fiddler crab species share similar lifestyles, but each has its own very particular tolerances for how long, how often, and how much its burrow floods during high tide. In the intertidal zone, a few centimeters can make a big difference, so each species sticks to a very narrow strip of habitat. Along the coast of Darwin Harbour in northern Australia, rising sea levels are sending two fiddler crab species, elegant fiddler crabs (Tubuca elegans) and signaling fiddler crabs (Tubuca signata), scurrying higher to seek less waterlogged homes.

The problem is, they’re moving into the habitat already occupied by the banana fiddler crab (Austruca mjoebergi), which is having trouble adjusting to its new neighbors—mostly because it’s being too friendly, according to a new study.

Male fiddler crabs of all species stake out a territory, dig a burrow, and defend it against intruders. For two weeks during the summer, the females walk among the males’ burrows in search of mates, while the males stand outside and wave their large claws for attention. When there’s just one species of fiddler crab in an area, the system works. But male banana fiddlers seem willing to wave at any female who wanders by, whether she’s the right species or not.

Sometimes they’ll even leave their burrows to follow a passing female for a short distance, which leaves them exposed and easy targets for gulls, kingfishers, and shorebirds. If they’re chasing a female crab of the same species, that’s often worth the risk. But banana fiddler crabs can’t mate with the newcomers, which leaves indiscriminate male crabs wasting time and energy—and possibly risking their lives—to court females incapable of bearing their offspring.

Interactions with males of other species are even more complicated for banana fiddler crabs. Negotiating property lines is a violent business among fiddler crabs, and living with a neighbor you’ve already worked things out with is easier than starting over with a new one. Males sometimes pitch in to help their smaller neighbors defend against intruders, but only if the odds of winning are good—the bigger the intruder, the tougher the fight, and the more likely males are to think twice. 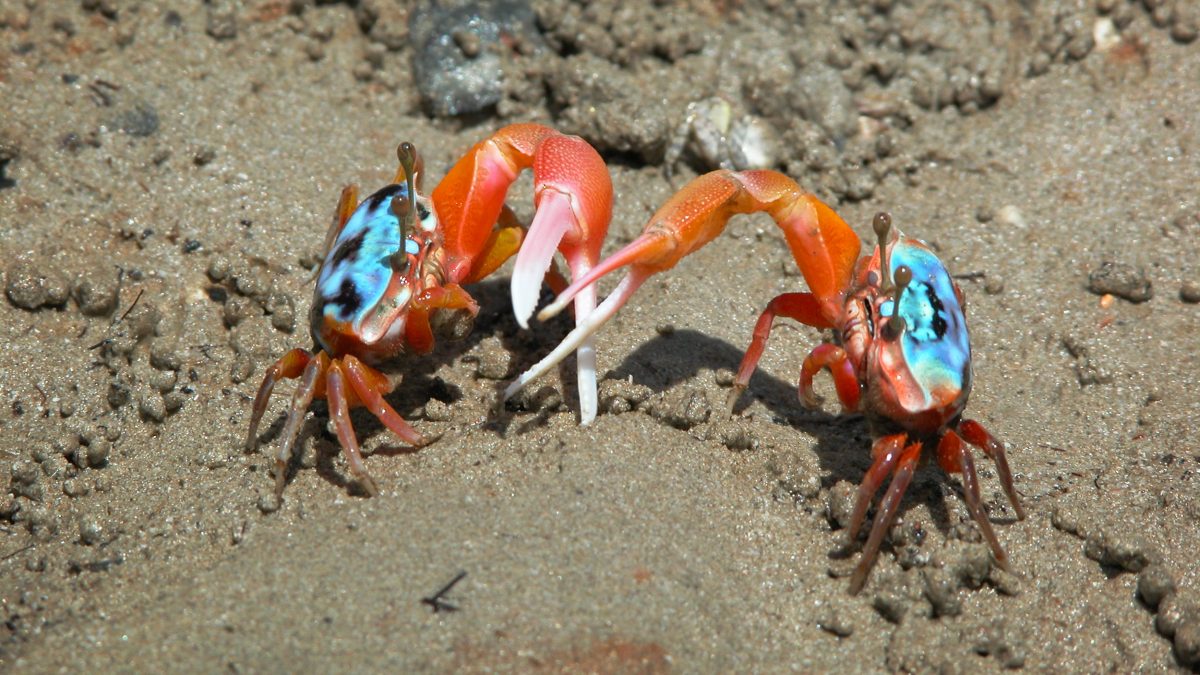 Banana fiddler crabs tend to be smaller than elegant and signaling fiddlers. So when the bigger crabs show up, banana fiddler crabs are less likely to help each other fight them off. But it may be even worse. Because banana fiddler crabs do not always discriminate when it comes to their neighbors, study author Fábio Sanches, a biologist at São Paulo State University in Brazil, says it’s possible that they might choose to help a neighbor of a different species and gang up on their own species.

Losing a burrow is a tough break for an individual crab, but if enough banana fiddler crabs start losing territory to the newcomers, this population could end up losing its habitat.

If sea level rise and habitat destruction keep squeezing species together in smaller habitats, those who don’t adapt may lose out. “It is possible that some species will [face] a more negative impact,” says Sanches.

And the banana fiddler crabs have nowhere else to go. Construction, including buildings, roads, and levees along the upper edge of the intertidal zone, creates a barrier for species migrating uphill to flee rising waters.

It’s hard to predict how these three crab species will ultimately adjust to sharing space. “Fiddler crabs still have many strategies for species recognition,” says Daniela Perez, a biologist at Australian National University, who was not associated with the study. In time, she says that the banana fiddler crabs may get better at telling the different species apart and it may be the females that save the day. Females seem to have an edge on identifying appropriate partners, and are better at recognizing the claw color and distinctive “wave” of potential mates.

Taking a cue from courtship timing, for example, would be one survival strategy. The three species seem to mate at different times, Sanches explains. Since courtship is energetically demanding, male banana fiddler crabs may eventually wise up to the fact that displaying for any female fiddler crab that happens to wander by— regardless of her species—is a distraction that doesn’t serve them well.

It may look like a tragedy in the making, but if male banana fiddler crabs can stay on task, there’s hope that their story may play out more like a romantic comedy.