Researchers have discovered many unique species that call the Nazca Ridge home. They say that allowing fishing activity to continue in the area could potentially harm those species. Photo by Jon Arnold Images Ltd/Alamy Stock Photo

Yet for many conservationists and marine biologists in Peru, the announcement was bittersweet. The government included one significant provision when designating the reserve—fishing, both artisanal and industrial, will be allowed to continue to depths of 1,000 meters, and even deeper for those targeting Patagonian toothfish, also known as Chilean sea bass.

“It means,” says Alan Friedlander, the chief scientist of the National Geographic Society’s Pristine Seas project, that for fishers operating in the region, it’s “pretty much business as usual.

“There is no ecological benefit in the creation of the reserve, and we are talking about an extremely fragile and unique environment,” he adds.

A professor at the Hawai‘i Institute of Marine Biology, Friedlander is personally familiar with the fragility of the ecosystem. Over the past decade, research conducted by Friedlander and others on the Nazca Ridge’s biodiversity has shown that the ridge has one of the highest number of endemic species—animals found here and nowhere else—in the world.

His surveys have identified corals and sponges, two kinds of crab, one type of lobster, and one kind of sea urchin. The ridge also functions as a habitat and navigation corridor for large animals like blue whales and leatherback turtles.

Friedlander and other scientists believe that the Nazca Ridge may harbor many other undiscovered species. In 2014, the Nazca Ridge and the neighboring Salas y Gómez seamounts were recognized as an ecologically or biologically significant marine area by the United Nations Convention on Biological Diversity.

“Chile has been doing a good job in the protection of its portion. We were hoping that Peru would be bold enough and do its job, too,” Friedlander says.

According to environmental lawyer César Ipenza, a professor of environmental law at Universidad ESAN and at the Universidad del Pacífico in Peru, the Peruvian legal system does not allow extractive activities in protected areas, so the provision to allow fishing to continue in the Nazca Ridge National Reserve is unconstitutional. “There are juridical ways of changing this decree,” he says.

The problem, Ipenza says, is that the powerful Peruvian fishing industry has pressed the government to allow fishing operations to continue in the reserve.

“That sets a nefarious precedent. If fishing is allowed in the Nazca reserve, why not in all other ones that will be created in the future?” he reasons.

Members of the fishing industry, however, argue that there is no evidence that artisanal or industrial fishing can negatively affect the ridge’s ecosystem.

“The seamounts are found in depths between 2,000 meters and 2,500 meters,” says Jorge Risi, general manager of Peru’s National Fisheries Society. “Fishing is carried out on the surface and respects the regulations.” 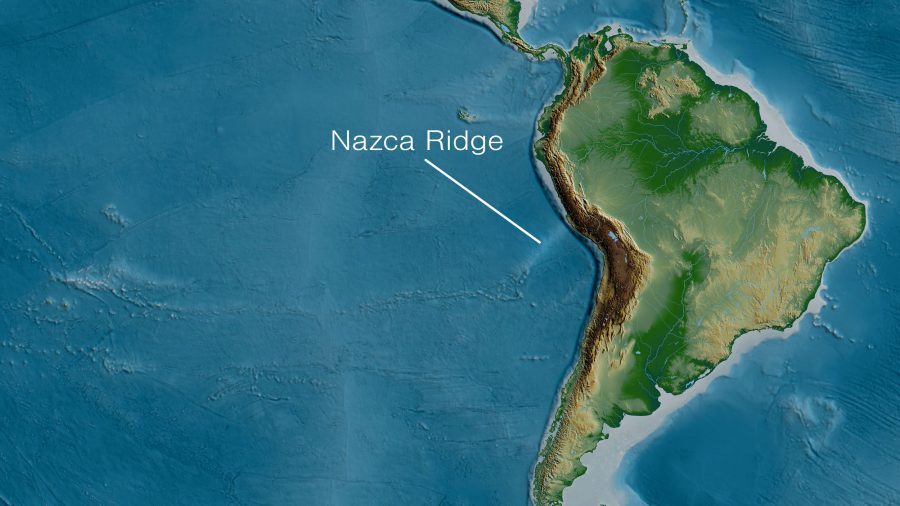 The Nazca Ridge extends 1,100 kilometers from Peru and Chile into the Pacific Ocean. Image by Yarr65/Alamy Stock Photo

Friedlander says that there are actually many ways that fishing can threaten the ridge ecosystem, adding that the fishing industry should be invested in protecting the ridge because species of commercial interest use the area as a nursery and as habitat.

Dozens of environmental organizations have signed a petition against the decree to allow fishing in the Nazca Ridge National Reserve, including Pro Delphinus, a Peruvian non-profit that works to protect endangered marine animals.

“When we don’t know the impact that fishing on the surface can have on deep waters, we should apply a precautionary principle in legislation,” says marine biologist Joanna Alfaro, the director of Pro Delphinus.

The fishing industry also argues that because fishing licenses have already been given out to fishers and companies to work in the area, they cannot be taken away now.

“But the Peruvian legal system does not include any form of absolute vested right,” says Juan Carlos Riveros, scientific director of the ocean conservation nonprofit Oceana Peru. If the government wanted to withdraw fishing permits, it could. “Our perception is that the ministry bowed to the industry’s pressure,” he says.

Riveros says Oceana has been talking to the ministers of Peru’s federal government, led by recently elected President Pedro Castillo, and has been working on reversing the provision.

Yet Peru’s environmental dilemma extends far beyond the Nazca Ridge National Reserve, says Alfonso Miranda, a former minister at the Ministry of Production (a governmental sector that includes the fishing industry) and the current director of the fishing and aquaculture committee at the National Society of Industries, a group representing private industry in the country. Peru does not have well-established policies to protect the environment, Miranda says.

“The simple creation of a marine reservation does not protect anything,” he says. “The Nazca Ridge is 100 kilometers distant from the shore. If the government is incapable of monitoring things that happen on land, how is it supposed to control what happens so far away?”

Although conservationists agree that there are many issues to tackle in Peru, most consider the creation of the Nazca Ridge National Reserve an important step—one that would be much improved if it were kept closed to fishers.