The view of Ushuaia, Argentina, is visible from the Beagle Channel. The channel connects the Atlantic and Pacific Oceans as it zigzags across Tierra del Fuego, but 15,000 years ago, the channel was just a long inland lake. Photo by Helmut Corneli/Alamy Stock Photo

In 2018, biologists in Ushuaia, Argentina, were scooping sediment from the bottom of the Beagle Channel, 1.5 kilometers from shore, when they discovered something unexpected in the dredged gravel and sand: a narrow, eight-centimeter-long projectile point made of stone. They alerted Atilio Zangrando, an archaeologist with Argentina’s Austral Center for Scientific Research, who immediately realized that he was looking at something remarkable.

According to Zangrando, this is the first time that a projectile point has been found this deep underwater in the Beagle Channel, which zigzags across Tierra del Fuego. The extraordinary find now prompts the question of how the point got there.

Homing in on the projectile point’s provenance would tell us something about early humans’ relationship to the coast—like whether they hunted at sea, says Zangrando. Illuminating that relationship, however, requires knowing when the point ended up in the channel. That’s because the water level in the Beagle Channel has changed dramatically since the end of the last ice age, about 15,000 years ago. Back then, the channel was just a long inland lake. But as glaciers retreated and sea levels rose, the lake flooded, connecting the Atlantic and Pacific Oceans. By about 9,000 years ago, the lake had become a channel.

So if the projectile point dates to the early stages of this transformation, then the spot where the biologists found it may have still been land, between the rising water and the retreating ice. Conversely, if the projectile point is much younger, then the spot was likely deep underwater. That could imply the point was used as a weapon for hunting at sea, says Zangrando, adding that people began using watercraft off the archipelago at least 7,000 years ago. 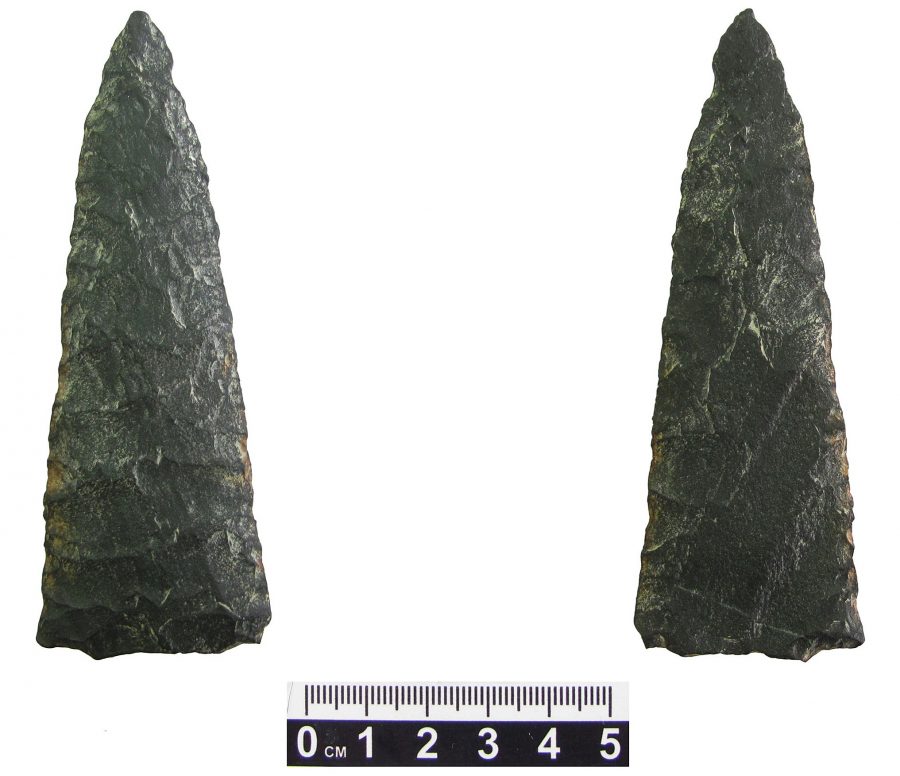 Biologists discovered this projectile point at the bottom of the Beagle Channel in 2018, but its age still remains unknown. Photo by María del Carmen Fernández Ropero

Figuring out how old the artifact is, however, has proven difficult. It contains no organic matter, so radiocarbon dating can’t be used to calculate its age. And since the biologists only discovered it after it had been removed from the seafloor, there aren’t any associated human-made artifacts to offer contextual clues, only sand and gravel.

But that doesn’t mean the projectile point exists in a vacuum. Tom Dillehay, an archaeologist at Tennessee’s Vanderbilt University who has done extensive work in South America, says the newly discovered artifact resembles other stone points from Monte Verde, an archaeological site in Chile that dates back 14,500 years. The Beagle Channel point, however, is more complex than the ones found in Monte Verde, which makes him think that it’s probably younger. “There are archaeological maritime sites in the region dating to 5,000–7,500 years ago, and it easily could have been dropped then or later,” said Dillehay by email. This would place the projectile point to well after the Beagle Channel flooded—suggesting that it was indeed lost at sea, possibly by a hunter who used it as a harpoon.

Zangrando is now exploring a new tactic to find out the point’s approximate age. Although he can’t study the point’s underwater origin in situ, he may be able to analyze the geology of the sediment that the biologists dredged alongside the point that day, and perhaps connect all that sand and gravel to a particular stage of the Beagle Channel’s geological formation. If he can date the sediment, he might get closer to dating the point. But even if its exact age eludes him, Zangrando says that the projectile point is a testament to how much there is still to learn about the people who created it.