Parks Canada figured it had rats on the run. In 2013, the agency dropped poisoned pellets from helicopters across Faraday and Murchison Islands in Gwaii Haanas National Park Reserve, National Marine Conservation Area Reserve, and Haida Heritage Site on Haida Gwaii, British Columbia. The objective was to rid the side-by-side islands of invasive black rats, which were introduced to the region by ships more than a century ago and have been decimating vulnerable seabird nesting colonies ever since. The pellet drop was part of a multi-year eradication effort that saw the agency and its partners spend CAN $3.18-million between 2011 and 2015.

By 2016, the Haida Nation, Parks Canada, and a variety of government and conservation groups, were celebrating their conquest over rats on these remote, rugged islands. Follow-up monitoring suggested a six percent increase in the local population of ancient murrelets—a stubby, black-and-white, federally protected seabird that was one focus of the conservation effort.

But the party was short-lived. By September 2017, cameras showed that rats were once again on the islands. These were not the black rats that had been eradicated, but new invaders: bigger, more aggressive brown rats. “It was crushing news,” says Miranda Post, a spokesperson for Parks Canada.

How did they get there? Finding the answer could have far-reaching implications, given the global plague of invasive rodents on islands.

Bryson Sjodin, a graduate student at the University of British Columbia who is studying the history and ongoing dynamics of rat invasions on Haida Gwaii, says it’s logical to think they swam. Genetic analyses of rats collected from islands throughout Haida Gwaii suggest the most likely source for the new colonists was nearby Lyell Island.

Depending on the tides, Lyell Island is 800 to 900 meters north of Faraday Island. Rats “don’t look like they’re much for swimming, but they’re surprisingly mobile,” Sjodin says. Field and lab research with brown rats elsewhere in the world supports that theory—to a degree. 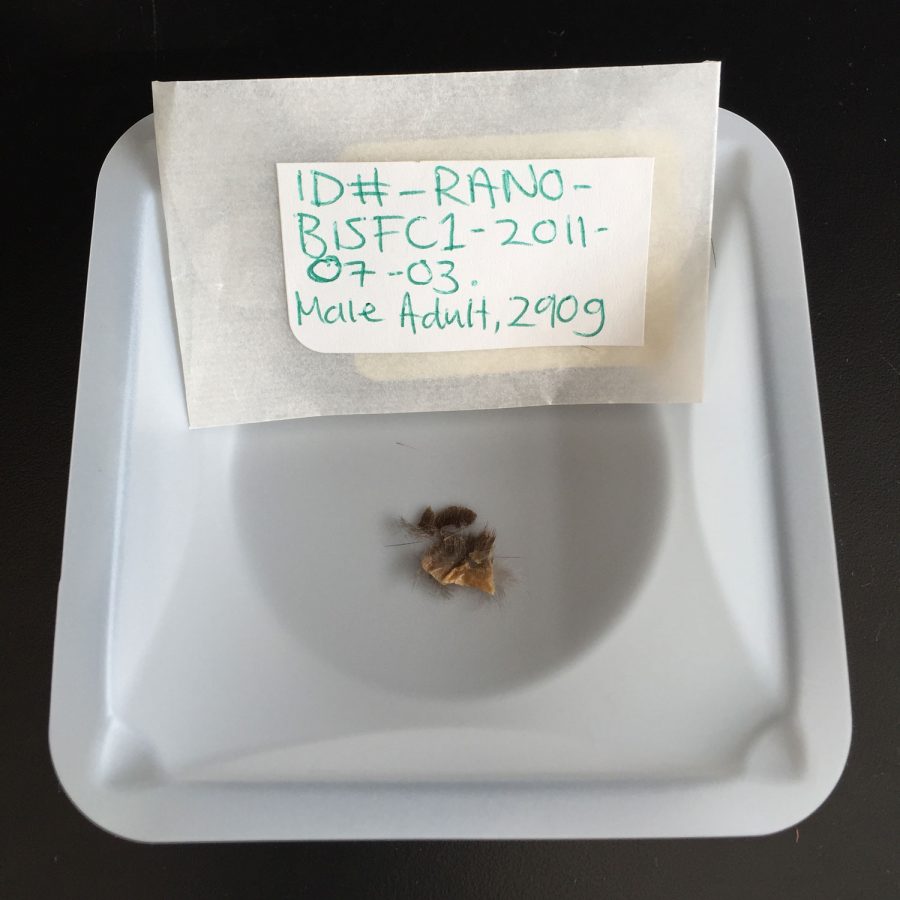 For the past decade, field researchers on Haida Gwaii have been catching and killing brown rats as part of a larger study of rat dynamics. So far, they’ve shipped about 600 dehydrated ears back to Sjodin for DNA analysis. “It’s a little bit morbid,” he acknowledges. Photo by Larry Pynn

James Russell, a biologist at the University of Auckland, in New Zealand, who has studied rats using radio tags, says that while the rodents are known to be strong swimmers, they don’t routinely colonize across such long distances.

Sjodin says they can’t rule out another possibility—that one or more rats hitch-hiked aboard driftwood. All it would take is one pregnant female to successfully make the crossing from Lyell Island to establish a new population in the absence of predators. “How exactly they came across, I don’t know if we’ll ever answer that,” Sjodin says.

This isn’t the first time brown rats have thwarted eradication efforts in the region. In 2011, Parks Canada sought to eradicate rats from two other nearby bird-nesting sites, Arichika and Bischof Islands. Poison bait stations seem to have done the trick on Arichika, but brown rats returned to Bischof Island.

The distance from Lyell to Bischof is only 500 meters, and, based on his DNA research, Sjodin believes that the Bischof rats also came from Lyell Island.

As to why the brown rats colonized Faraday and Murchison, researchers’ best guess is that a population explosion on Lyell caused them to strike out for new territory.

Having discovered where the brown rats came from, Sjodin is now seeking to figure out how connected the island rat populations in Gwaii Haanas really are. Kunga Island, for instance, is north of Lyell Island and is surrounded by deep, cold water. Here, genetic analyses suggest the island’s rats have lived in relative isolation. This information will be useful for future eradication projects, suggesting to conservation managers how much physical separation is needed to safeguard their efforts.

“If you have two island populations closely related they are likely exchanging migrants,” Sjodin says. “If you eradicate one island but not the other, there’s a really good chance you’re going to get a recolonization.” Globally, he notes, about one in five eradication programs on islands fail, which underscores the importance of finding ways to maximize conservation dollars.

As for the brown rats that have already made their way to Faraday and Murchison Islands, poison and carbon dioxide traps have been set until a more permanent solution can be found for a pest whose resilience continues to frustrate and astound.

Correction: An earlier version of this story stated that the project spent CAN $3.1-million in 2011 and $3.5-million in 2013. Incorrect figures were supplied to the author.