The Thomas Fire in California started on December 4, 2017, and burned for more than a month. Photo by CrowdSpark/Alamy Stock Photo

As the worst wildfire in California history raged last December, a vast plume of smoke rose over the Santa Barbara coast, raining ash into the sea.

At the time, Kelsey Bisson, an oceanography doctoral candidate at the University of California, Santa Barbara, was preparing to set sail on the R/V Sally Ride into the Santa Barbara Channel as part of an ongoing investigation of the region’s plankton. But when she saw satellite images of the plume hanging over the waters she had planned to visit, the focus of her research cruise abruptly changed.

“It was serendipity,” says Bisson. “Natural disaster and tragedy struck, but at that moment, we had a team all ready to go.”

For a week in mid-December, Bisson and a team of 17 specialists—in geochemistry, optics, microbiology, and even music and art—sailed through the channel, capturing the first real-time snapshot of how ash from a wildfire affects everything from marine carbon storage to the health of sea life.

Little is known about how wildfire ash affects the ocean, Bisson says. Scientists know that the iron-rich ash from volcanoes and burning forests can fertilize ocean life, but the fire in California, which became known as the Thomas Fire, was different. The initial stages of the fire incinerated more than 1,000 buildings and untold quantities of drywall, rubber, paint, glass, and even asbestos. Only later did it transition into a wildfire, burning trees and grass.

Key questions emerged in the researchers’ minds as the Sally Ride cruised offshore: what happens to the ash once it falls into the sea, and what effect could this presumably toxic ash have on ocean life? 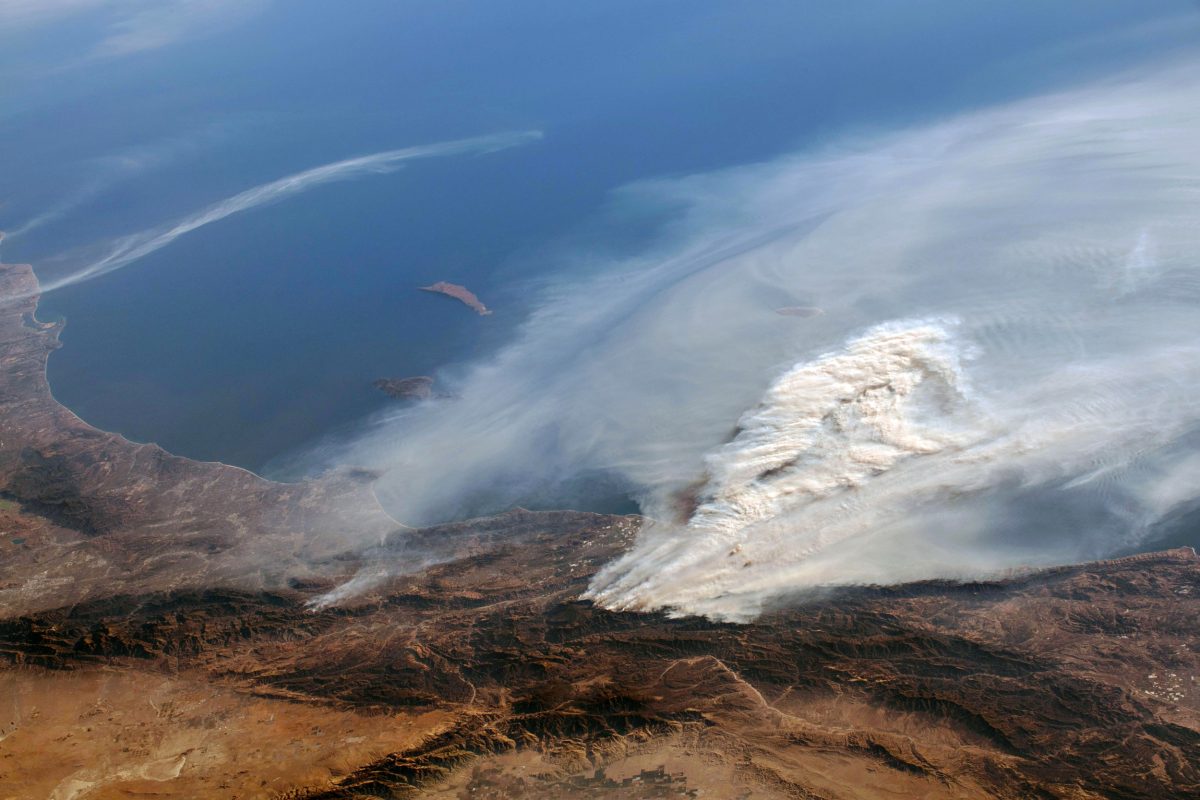 The ash plume from the Thomas Fire could be seen from the International Space Station. Photo by NASA Photo/Alamy Stock Photo

The team observed that some of the ash settled on the seafloor and as it descended, some of the material dissolved, releasing nutrients, carbon compounds, and trace metals. Other particles became floaters, pushed into patches of debris by surface currents.

Bisson says the ash they observed fell into two categories: glassy and transparent objects with sharp, jagged edges, which she thinks are from burned synthetic materials; and amorphous, dark particles, presumably derived from organic matter.

So far, Bisson only has a working hypothesis about what the ash did to sea life. “Depending on the chemical concentration of the ash, it could either fertilize the ocean to some extent, or possibly inhibit growth, based on the toxins embedded in it,” she says.

Ash from burned organic matter, such as trees, contributes iron and other minerals that support plankton growth. Bisson says many marine environments are typically starved of iron, and they rely on limited supplies from airborne dust, deep-sea vents, and the outflow of rivers. But like fertilizer on land, too much of a good thing can be harmful. Take, for example, the massive 1997 wildfires that struck Indonesia: so much iron was released into the atmosphere that scientists believe it fueled a red tide that asphyxiated an entire coral reef ecosystem downwind, off the coast of southwestern Sumatra.

What makes the Thomas Fire different, Bisson says, is the presence of so much potentially toxic ash from burned buildings. She hypothesizes that this ash could affect plankton, with the damage flowing all the way up the trophic ladder and eventually harming humans. She says the ash particles she observed were small enough that zooplankton could mistake them for food.

For now, Bisson and her team are waiting for results from the analysis of thousands of samples, due later this year, which will detail the chemical composition of the ash, among other things. Oceanographer and University of California doctoral candidate Eleanor Arrington, who accompanied Bisson on the trip, says they will soon have a trove of information on how the wildfire ash affected bacteria, zooplankton, and phytoplankton—a topic that until now has been a blind spot for oceanographers.

“We hope this can be used by many scientists in similar environmental disasters in the future,” Arrington says.