Picturing the England’s coastlines, you might imagine the White Cliffs of Dover, jaunty seaside towns with colorful beach huts, or colonies of seals or puffins and the odd killer whale. Yet nestled in these shorelines are well over 1,000 disused landfills poised to begin shedding their contents—plastic, metal, household waste, and organic contaminants—onto beaches and into the sea.

Within the next 50 years, one in 10 of these landfills are expected to start releasing waste into the ocean as the coastline erodes, according to a recent study by researchers at Queen Mary University of London. Some have already started.

In Westward Ho!, a small beach town in the southwest of England, a landfill that was closed in the 1990s has been spilling contaminants onto the beach. The dump lies right at the mouth of the estuary of the Rivers Torridge and Taw, where they flow into the Celtic Sea. In early January, a storm breached the plastic barrier and rock armor intended to keep the waste confined.

“Litter is leaching out onto the beach,” says Catherine Oliver, a resident and volunteer beach cleaner. “People find rubbish on the beach that definitely isn’t from this era. More or less everyone who lives in the area knows about the problem, and everyone is really worried about it.”

Led by Kate Spencer, the research team put together one of the most comprehensive maps of at-risk landfills in England, but the scientists say the problem is global. Historically, low-lying coastal areas, typically near estuaries, were popular sites for landfills. The river was often the easiest way to take rubbish out of a city, Spencer says, and the nearest uninhabited dumping ground was often near the sea. Spencer is in touch with researchers in Belgium, Norway, and the United States who are working on similar issues.

“There must be 100,000 coastal landfill sites globally potentially at risk of erosion, but detailed information on them isn’t available to us yet,” says Spencer. Reports from Taiwan to Australia show similar stories, but the scientific data to map the problem fully is so far lacking. 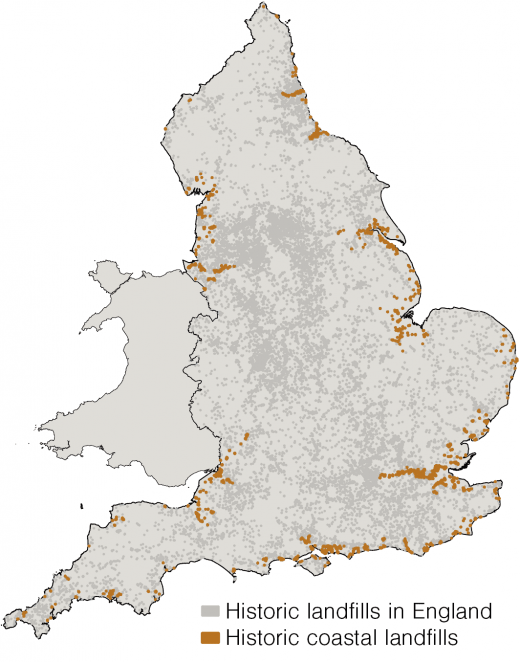 Of the nearly 20,000 historical landfills across England, 1,215 are on the coast. Illustration by Brand et al.

Yet as climate change leads to rising sea levels and more frequent extreme weather events, the rate of erosion of these sites is expected to increase, and scientists are grappling with how to deal with the problem.

“You could relocate the material in the landfill, excavating it and taking it elsewhere, but that is hugely expensive,” Spencer says. “You also face contaminating new areas with the waste as you take it away.”

According to Spencer’s analyses of the contents of some English landfills, this prospect would be risky. At two landfills, her team found plastics, metal contaminants, and toxic waste such as coal ash. Other old sites have tested positive for mercury, asbestos, heavy metals from electronics, and persistent organic pollutants.

“There are of course also things like nappies and sharps [needles] in the tips [landfills],” she says. “There’s very likely to be human viruses and pathogens present.”

For now, maintaining the often very costly coastal defenses near the landfills is the best plan for staving off the erosion as long as possible. Beach cleaners are working to clear up the rubbish that spills out, but the trash that does make it into the sea is quickly lost. Few local authorities in England have the money necessary to move a landfill away from the coast, even if it could be done safely, Spencer says. She thinks more reliable, costly, and long-term solutions to the problem won’t happen until it’s an issue that can no longer be ignored.

“There will be some catastrophic event—perhaps a very high-impact storm—that will release waste we weren’t expecting in an area that impacts people,” Spencer says. “That’s the point at which we’ll do something.”