In the summer of 2012, Michelle Fournet had a dream job—studying humpback whales in Southeast Alaska’s Frederick Sound. The Oregon State University graduate student spent long days in a boat listening for the whales through underwater microphones and watching for them from a lighthouse. One day on the water, a whale’s call blasted through Fournet’s headphones. Simultaneously, a ring of bubbles appeared on the water’s surface about 50 meters away from her boat. When the call stopped, a humpback whale burst through the center of the bubbles, gulping down fish.

As impressive as it was to watch the spectacle from so close, it wasn’t until three years later, when Fournet was combing through the summer’s notes and recordings, that she realized the importance of that solitary whale’s call. Her observation would help shift scientists’ understanding of a well-documented humpback whale behavior.

That day, Fournet had heard the whale make a feeding call, a vocalization that pierces the water at a frequency of 500 hertz. It sounds like a series of haunting trumpets, or as Fournet describes it, “a really happy soprano.” Since 1974, when the call was first identified, researchers have documented some groups of Alaskan humpbacks making the feeding call while hunting Pacific herring. But those whales had always been in groups; Fournet’s whale was belting it out solo.

Over the years, scientists have hypothesized various meanings and purposes for the feeding call, which is most often associated with a social feeding routine known as bubble-net feeding.

When a group of humpbacks finds a school of herring, typically one whale dives and slowly circles the fish, releasing bubbles from its blowhole to form an ephemeral bubble net that corrals the fish. At the same time, another whale trumpets the feeding call. Trapped by the bubble net, the increasingly frenetic fish ball up. Once the feeding call stops, the whales swim up through the trapped herring, devouring them as they power to the surface.

Of the leading explanations for the call’s purpose, two focus on social interactions. One suggests the call is used to recruit nearby whales to help herd the herring. Another proposes that it is used to coordinate the timing of the whales’ bubble-net feeding. So when Fournet realized she’d recorded a solo whale making the call, she thought, “That’s not possible. This is a group feeding call.”

Yet when she and her research team double-checked their data, they determined that not only did the call come from one whale, there wasn’t even another humpback within two kilometers. And in reviewing the entire summer’s data, the team found that they’d recorded solitary whales making the feeding call eight times over the course of several days. 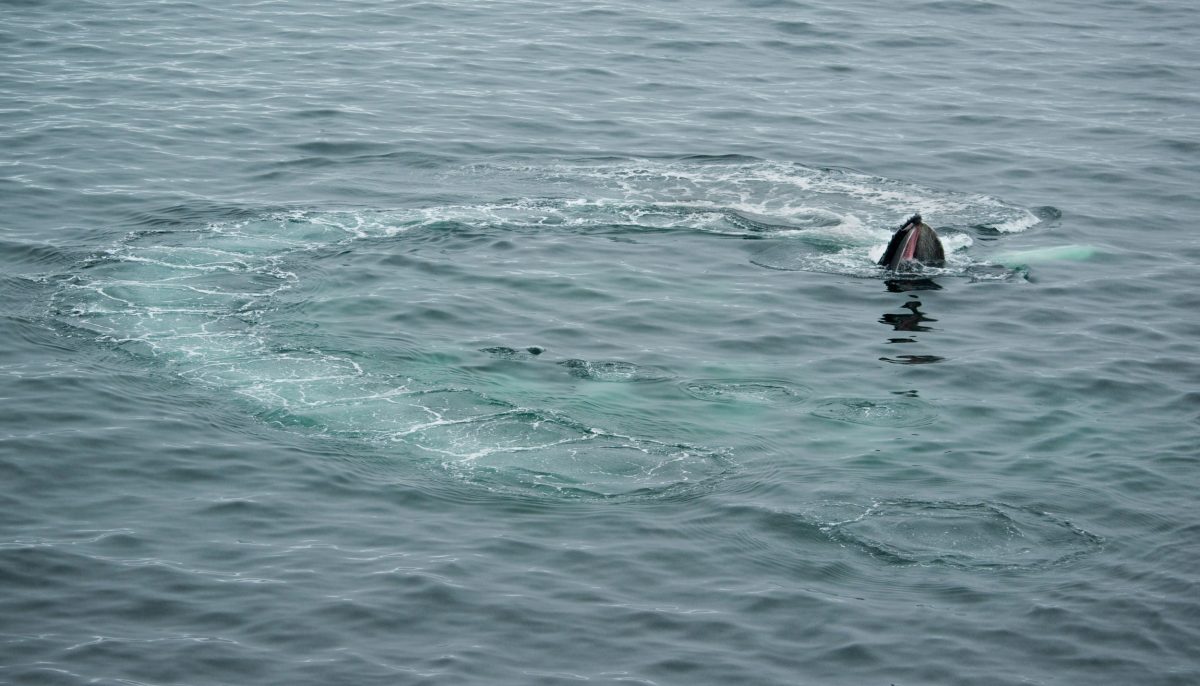 Bubble-net feeding is usually a social behavior, with whales working together to constrain and catch fish. Photo by Kevin Schafer/Minden Pictures

But the observations went against the scientific mainstream, and when Fournet submitted her research to a scientific journal for publication, the paper, with its surprising finding and small data set, was met with skepticism and rejected.

But one of the scientists who reviewed her paper, Christine Gabriele, a wildlife biologist at Alaska’s Glacier Bay National Park, told Fournet that she, too, had heard solitary whales making the feeding call. The scientists began asking around. Eventually, they compiled records from five research projects that spanned Southeast Alaska from 1995 to 2017.

This much larger data set, which they successfully published earlier this year, lends support to a third hypothesis for the feeding call’s purpose: that the 500 hertz call, which falls within the same narrow band that herring can hear, is used to help corral the fish, possibly by scaring them into a tighter ball.

New research projects, by Fournet and others, are already in development to further test the feeding call’s purpose, or purposes. One will explore how herring react to the feeding call, and another will play the call to humpbacks known to bubble-net feed to see whether the sound recruits them to the scene.

David Cade, who studies humpback feeding ecology at Stanford University in California, says these few but well-supported observations are convincing. He sees it as evidence of how versatile humpbacks can be in their hunting techniques.