Small microbes, like these single-celled diatoms, form the base of the ocean food chain. They also have a hand in controlling ocean chemistry, and even the weather. Photo by Robert Pickett/Visuals Unlimited/Corbis

In 1988, David Karl set up a research station 100 kilometers north of Oahu, Hawaii’s third-largest island. Ever since, scientists working on his Hawaii Ocean Time-series (HOT) project have been building one of the longest continuous records of ocean chemistry, currents, and microbial communities ever put together. The data has played an important role defining scientists’ understanding of how the makeup of ocean water is changing over time. 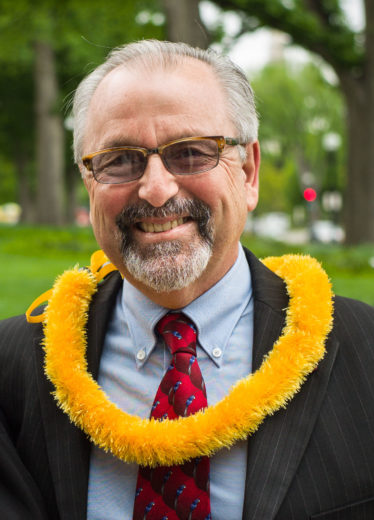 David Karl is a professor at the University of Hawaii. Photo courtesy of David Karl

Karl is one of the founders of microbial oceanography, in which scientists study the microscopic organisms found in the water column. His work has helped reveal the food web that supports life in Antarctic waters, he had a hand in discovering the hydrothermal vents in the Galapagos Rift, and data from the HOT project helped prove that carbon dioxide emissions are making the ocean more acidic—research that won the Cozzarelli Prize in 2009.

Earlier this month, the Balzan Prize Foundation announced it would be recognizing Karl’s lifetime of work during an awards ceremony to be held in November. The annual prize, which includes a purse of 750,000 Swiss francs (US $770,000), is meant to recognize cultural and scientific achievement, and work that promotes world peace. Previous recipients have been as diverse as legal philosopher Ronald Dworkin (2012), Swiss/German materials scientist Michael Grätzel (2009), and Pakistani humanitarian Abdul Sattar Edhi, an advocate for the poor (2000). Karl is only the second oceanographer to take home the prize.

In an interview, Hakai Magazine spoke with Karl about microbial oceanography and the future of ocean life. The interview has been lightly edited for clarity.

Hakai Magazine: How do microorganisms in the ocean influence the environment?

David Karl: Roughly half the oxygen produced on the planet every day is made by microorganisms that live in the sea; the other half is produced by the terrestrial environment—trees and plants. Microorganisms also keep photosynthesis going in tropical marine environments, such as those around Hawaii.

In most of the world’s ocean the limitation to photosynthesis is not light, it’s actually nutrients, such as nitrogen and phosphorous. Bacteria keep these elements cycling through our planet. On any given day, if 100 units of nitrogen are used by the plants in the tropical ocean, 99 percent of those have been recycled in place by bacteria, and one percent came from outside the system. If there weren’t bacteria in the ocean, the recycling wouldn’t take place and photosynthesis would cease.

One other thing about microbes is that they degrade most of the pollutants that have been made by humankind—everything from oil spills to waste materials, including sewage. So, if there weren’t microbes breaking these things down, the beaches would be littered with them.

HM: How will climate change affect these microorganisms?

DK: That’s actually something we’re studying. We know for a fact that an increasing temperature increases microbial respiration at a faster rate than it increases primary production. Primary production produces oxygen, whereas respiration consumes oxygen. So warming could lead to a net removal of oxygen from the surface of the ocean.

One thing we’ve seen is that most microorganisms are hybrids: they can behave partly as a plant and partly as an animal, and the balance between those two states is controlled by the environment. Let’s say there’s a trigger, where most of the microbes that are acting like plants suddenly pass some threshold point and would rather act like animals. Now there is a net consumption of oxygen rather than a net production of oxygen. That’s what we call a critical threshold point in ecology, where you could fundamentally change the entire community almost overnight.

HM: Some of your research has been to study the genomic sequences of ocean microbes. What have you learned from this approach?

DK: Studying ocean microbes is, in some ways, analogous to tracking your blood chemistry or heart rate. Certain genes show up when microbes are unhappy or stressed.

I am worried that we may be changing the genomic composition, the DNA content, of the ocean. The first organism ever to be sequenced was a marine microorganism back in the late 1990s, and we’ve now got about 10,000 sequences of organisms. We also have metagenomes, where you just go out in the ocean and sample everything that’s there, and analyze the gene content—essentially reading the book of life in the ocean. But we’ve only been able to do this for the last four or five years, and we probably need 10 years or 30 years of data to be able to see if there’s a genetic drift because of temperature, let’s say, or lower oxygen content, or acidity. These are things we’re tracking right now; it’ll just take time.