Getting tangled in ropes from crab, lobster, or other traps is a leading cause of death and injury for whales. Photo by Bryant Anderson/NOAA Fisheries MMHSRP Permit# 18786-01 via AP

Bright brains are thinking fast in California, where engineers, environmentalists, fisheries agents, and commercial fishers are devising clever ways to catch prized Dungeness crabs without harming whales in the process. For whales, getting entangled in the ropes that stretch from crab pots to floating buoys is a threat of growing concern. This spring in California, a string of whale deaths led to an emergency closure of the crab season. If the deaths continue, it could mean a reduced crab fishing season every year unless a solution is found.

Commercial crab fisher Dick Ogg, of Bodega Bay, California, knows his industry and its several hundred fishers must adapt. “We have to change. This is all about protecting our environment, the creatures that live in it, and our industry,” Ogg says.

Last year, Ogg voluntarily tested two prototypes that deploy crab pots without leaving ropes in the water. One, made by Desert Star Systems, is designed so a fisher can send an acoustic signal that triggers the pot to open a mesh bag, releasing a buoy and coiled rope that float to the surface. In his test, the retrieval gear never appeared and Ogg lost his pot.

With the other system, called the Fiobuoy, from Fiomarine, a buoy spooled with heavy line is attached to the pot. As with Desert Star’s device, a signal from the fisher releases the buoy, which unravels and floats to the surface. The other end of the line remains attached to the pot, and the fishers are able to retrieve the gear. The Fiobuoy, Ogg says, worked without a hitch, though it took about 15 minutes for the float to appear and the clunky buoy makes the pots difficult to stack and store.

Other systems exist, such as a device made by Sea Mammal Education Learning Technology Society in Washington State, which works with no rope at all. Instead, it inflates a buoy attached to the trap, lifting it to the surface.

One or more of these designs, or some adaptation of them, represents the future of trap fishing, whether for crabs, lobsters, fish, or prawns, says Geoff Shester, a senior scientist with the California-based nonprofit organization Oceana who accompanied Ogg and two other fishers on their boats during trial runs.

“If this works, you could actually catch the crabs without the vertical lines in the water—that would basically solve the problem,” he says.

On the West Coast, whale entanglements spiked several years ago, owing partly to a shift in the animals’ seasonal feeding patterns. In California, from 2014 through 2017, at least 142 whales—mainly humpbacks—became entangled in crab pot ropes. Several more were reported for 2018.

Shester points out that East Coast lobstermen have been trying to mitigate ensnarements with critically endangered North Atlantic right whales “for 25 to 30 years, and nothing has worked.” Entanglements in lobster gear are a top threat to that population of whales, which number barely more than 400.

Entanglements involve more than just rope trailing behind a whale. Sometimes, a whale’s jaw becomes tied shut. More often, the lines cinch around a fin or tail, where they may cut through skin, blubber, and flesh, and even work their way between the animal’s vertebrae. A pair of severed humpback whale flukes tied up in crab fishing rope was found at San Clemente Island off Santa Barbara, California, in 2014, according to the US National Marine Fisheries Service.

Whales are literally being cut to pieces by crab lines, and the death toll could be scores each year. Clearly a remedy is needed, but some fishers are reluctant to invest in gear that makes their arduous jobs more difficult still.

Ogg points out that even the slightest failure rates in a ropeless system would rapidly deplete his inventory of 350 crab pots.

“Even if you had a half-percent failure rate, by the end of the season I’m liable to have no gear left,” Ogg says. 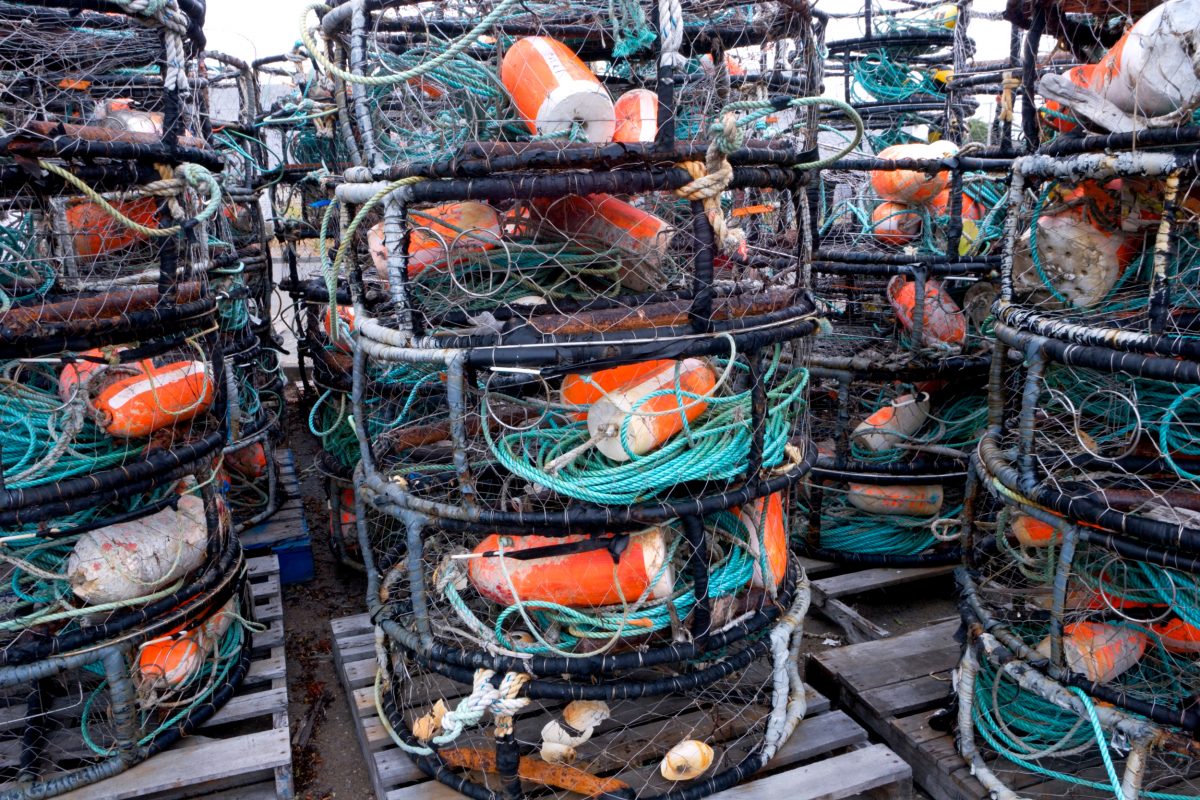 Typically, crab pots are attached to a rope leading to a floating buoy. Scientists and fishers are experimenting with a range of devices and approaches to keep the ropes out of the water. Photo by Richard Wong/Alamy Stock Photo

So far, ropeless systems are expensive—unaffordable, in fact. Jim McFarlane, a representative for Fiomarine, says Fiobuoys currently run US $4,000 to $5,000 apiece, far more than the $250 crab fishers typically pay for a pot and buoy. McFarlane suggests a system where the state owns the equipment and loans out the devices to fishers who wish to set pots when whales are present.

Meanwhile, mechanical engineer and inventor Barton Selby has what he thinks is a better idea than the ropeless systems: a small but smart gadget that clamps onto the buoy rope and can autonomously cut the line when it detects the irregular pulling of a snagged whale. The rope might be left wrapped around the animal in some cases, Selby says, “but the main thing is to get that anchor off of the whale.”

Selby points out that his system also doesn’t require the fishing fleet to learn new techniques. “With my device, the fishermen fish tomorrow the way they fish today,” he says. “It won’t impact their productivity.”

Ryan Bartling, an environmental scientist with the California Department of Fish and Wildlife who has been helping coordinate the efforts to eliminate whale entanglements, says minor to major logistical issues face every proposal currently on the table.

Selby’s autonomous line cutter, he notes, might not fit through fishers’ winch systems. But that’s a minor snag compared to the logistical implications of shifting an entire fishery, with at least 100,000 crab pots, to ropeless systems. Bartling explains that because ropeless systems offer no simple way for other boaters to see where the pots are set, additional technology and communication will be necessary so crabbers don’t drop their pots on top of one another’s, and so fisheries officers can effectively regulate the fishery.

“Enforcement needs to know where the traps are, and to inspect gear we’d need access to proprietary software,” Bartling says. Also, “the technology to see the traps on the bottom would have to extend to other fisheries, like trawling,” Bartling adds. “A trawler could pull up a whole string of pots, or they could lose a trawl net.”

The potential obstacles seem to go on and on, though Bartling believes they will prove entirely manageable in the 21st century:

“I have no doubt that technology will solve this,” he says.