As if shoveling coal in a steamship’s fire room wasn’t hard enough, part of a stoker’s job was also to scrape the residual “clinker” from the furnaces and toss it overboard. Submarine clinker trails trace the routes of steamships across the world’s oceans. Photo by Sueddeutsche Zeitung Photo/Alamy Stock Photo

A survey of marine life off the east coast of Australia pulled up several handfuls of history this summer, along with a distressing amount of modern litter. The historical artifacts don’t look like much—just some lumpy, ash-colored chunks of baseball-sized rock—but they trace the trails of steamships that plied these waters a century ago.

In the United States, the Great Plains still bear the scars of the Oregon Trail: deep ruts dug into the earth by the passing of thousands of wagon wheels. The ocean usually doesn’t keep such mementos; a ship’s track through the water is ephemeral. From the early 1800s to the mid-1900s, however, steamships inadvertently marked their routes with trails of clinker, a dense residue left after coal is burned.

Clinker is mostly slate and shale, fused into an ashy mass in the heat of the fire. As a ship steamed along, the crew periodically scraped clinker out of the firebox and tossed it over the side. Because the rock is so heavy, it sank quickly, hitting bottom right below where it was dropped. That, according to biologist Eva Ramirez-Llodra from the Norwegian Institute for Water Research, makes clinker uniquely good at marking the passage of ships on the surface. And because many steamships followed the same major routes around the world, ridges of clinker accumulated, leaving tangible trails.

Clinker marks the east-west route from the English Channel to the east coast of the United States, for example, as well as the north-south route along the west coast of Africa, explains geologist and oceanographer Phil Weaver of Seascape Consultants in the United Kingdom. 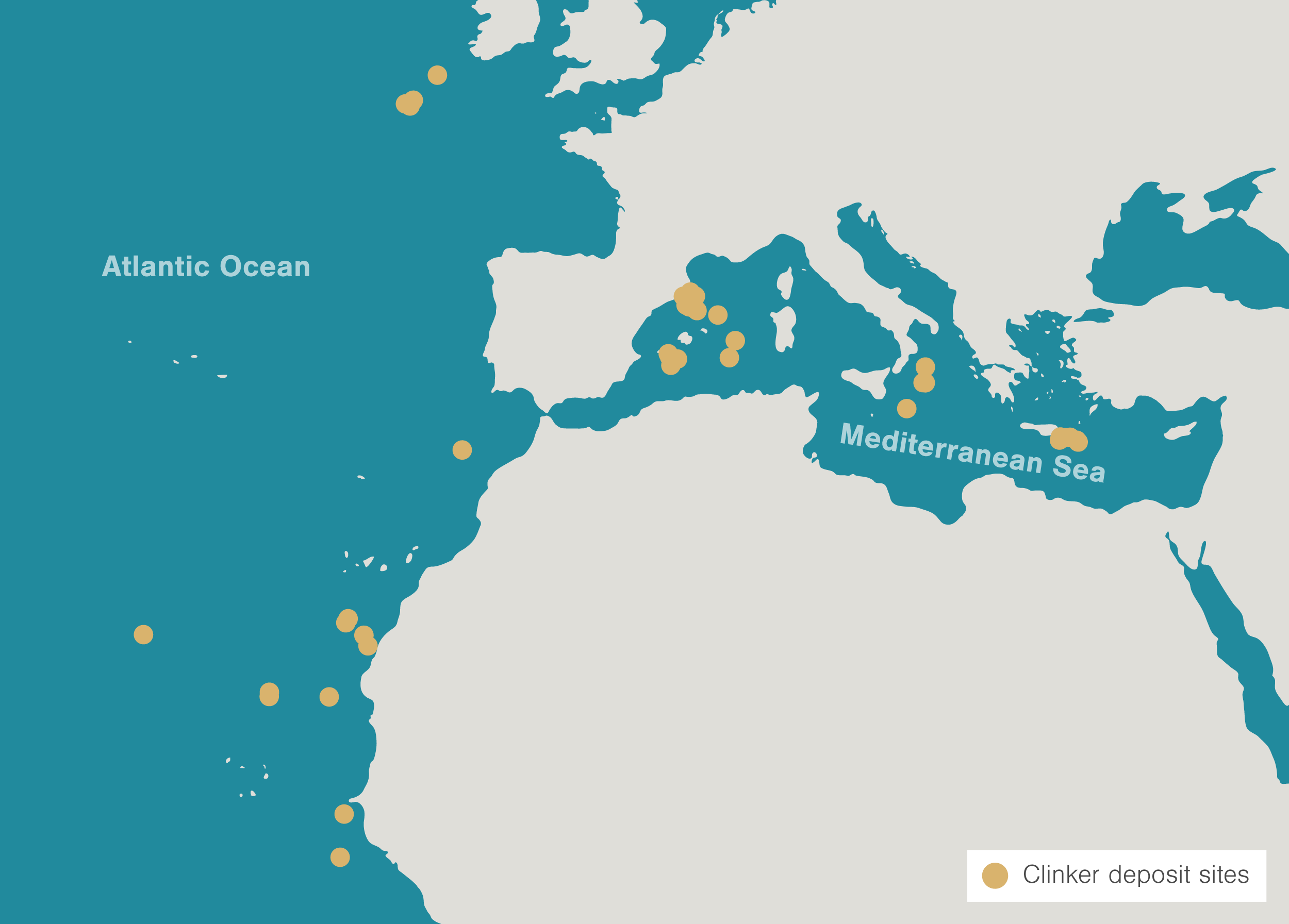 In June, part of one previously undiscovered clinker trail came to the surface when Australia’s Commonwealth Scientific and Industrial Research Organisation surveyed the seafloor between Tasmania and Queensland. Biologists found a mind-boggling diversity of marine life, but they also found a lot of human garbage, from modern plastics to clinker that might have been pitched over the side of a passing steamer during Queen Victoria’s reign. The rocky relics are part geological record of the Anthropocene and part tangible record of maritime history.

Clinker has also become an important part of marine ecosystems in places like the northeast Atlantic abyssal plain and the northwestern Mediterranean. There, far from the continental shelf, the ocean bottom is soft and muddy, leaving organisms such as anemones and brachiopods, which need to anchor to something solid, few places to attach.

Clinker can provide substrate for sessile fauna, often filter feeders, in the deep sea, providing habitat that may otherwise not be available, explains Ramirez-Llodra and her colleagues in a recent paper. In the northeast Atlantic, for example, clinker forms about half the available hard material for the anemone Phelliactis robusta to anchor to, and the Mediterranean brachiopod Gryphus vitreus also sometimes takes advantage of clinker for habitat. Although clinker appears to be toxic to other species, its usefulness to some is a rare case of human litter actually increasing deep-sea biodiversity.

But it won’t last forever. Some of the clinker is already buried under sediment, or is being dredged up in fishing or research trawls. Eventually, the sea will cover the last of the historical trails the steamships laid down. Without clinker, organisms like G. vitreus will move onto other deep-sea anchorages, perhaps glacial dropstones. But beneath the muddy bottom of the deep ocean will lie a geological record of humanity’s long relationship with the sea.