Researchers have discovered a novel type of hunting behavior in some of Florida’s bottlenose dolphins. Photo by 145/Pat Canova/Ocean/Corbis

When Stefanie Gazda landed on a remote Florida island to study dolphins, she felt out of her depth. She’d never led a research project before, and had little experience with marine mammals. She had to borrow a boat. Eventually, this project would lead to the discovery of a previously unknown dolphin behavior, bind her to the local community, and raise intriguing questions about dolphin culture. But on that first day, she had barely set out when she grounded her boat on an oyster bed.

Gazda hadn’t especially wanted to study bottlenose dolphins. But when she arrived at the University of Massachusetts Dartmouth in 2000 for her master’s program, she needed a project. Her adviser, marine mammal biologist Richard Connor, showed her a video he thought she might find interesting.

It was a home movie from the late 1980s. Connor had received the tape from a colleague, Hubbs-SeaWorld Research Institute biologist Daniel Odell. And it had landed in Odell’s hands via a Florida retiree named Frank Cox, who had shot the movie while he was out fishing.

In the video, one dolphin swims tight circles in marshy water, smacking the surface loudly with its tail. Dozens of fish leap from the water to escape—right into the mouths of other dolphins waiting in their path.

Cox had sent the video to SeaWorld and other institutions, hoping scientists would investigate the phenomenon. But no one did. So in 2001, Gazda headed to Cedar Key, Florida, to meet Cox and the dolphins.

“The initial goal was just to observe and report what was going on,” says Gazda.

Gazda took on an undergraduate field assistant, but the pair barely knew where to start. Cox’s brother lent them his boat for the summer. Cox himself was enthusiastic, Gazda says, and would join them on the water. He helped troubleshoot boat problems; between the salt and the extremely shallow water—often a meter deep or less—there were plenty. He also helped with the videos. 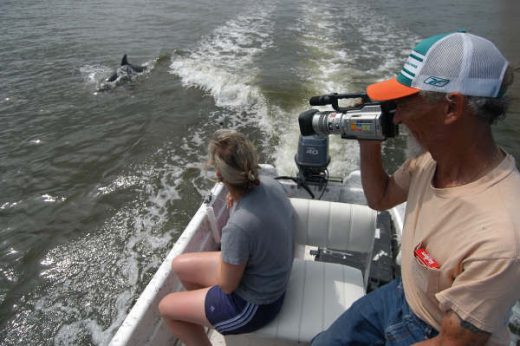 Frank had been interested in the ocean for as long as his son, Mike Cox, can remember. It probably started in the navy, Mike says, where his father served for four years as a young man. He later worked in electronics, and did a lot of photography and videography, as well as fishing and diving. “He carried around a video camera pretty much everywhere he went,” Mike says, which is how he captured the dolphin hunting raid.

With Frank’s help, Gazda studied two groups of dolphins that used the behavior he had found. It was a type of cooperative hunting that had never before been scientifically described. In each group, one dolphin herds fish toward the other two to five dolphins, which line up their bodies to make a wall. As fish jump from the water, the “driver” surfaces alongside the “barrier” dolphins to snatch fish from midair.

Most surprisingly, Gazda found that dolphins always play the same roles. They’re like the members of a football team, she says. One dolphin in each group is always the driver, kind of like a quarterback. The rest always form the barrier. There are other ways dolphins cooperate, and other animals that hunt in packs, but this kind of role specialization is much more unusual. Previously, it had only been seen in African lionesses.

Gazda published her findings in 2005 in Proceedings of the Royal Society B, which Connor, her adviser, calls “pretty remarkable for a master’s student project.” At Connor’s suggestion, Gazda listed Frank as a coauthor.

“Frank was really tickled by it, and very touched,” says Gazda.

Stefanie Gazda working on the water in Florida. Photo courtesy of the Cedar Key Dolphin Project

Gazda took some time away from academia and worked at the New England Aquarium. But, “it was always my calling to go back to research,” she says. She rejoined Connor in 2007 to start a PhD, and returned to Cedar Key.

As she got to know the dolphins and the shallow, treacherous waters, Gazda grew closer to the Cox family. She went to dinners and cookouts, and met more relatives than she could keep track of. Now, “Frank’s family is like an extension of my family,” she says. And as Gazda answered questions about the Cedar Key dolphins, Frank asked her even more.

Gazda has observed at least two more dolphin groups using the driver-and-barrier method. Like the original groups, these dolphins also specialize as either quarterbacks or receivers, so to speak. Gazda finished her PhD in 2015. This March, she published a paper in Marine Mammal Science showing that working with barrier dolphins lets drivers catch more fish than they would alone.

“These kinds of really specialized foraging tactics are found in lots of different bottlenose dolphin populations,” says Connor. For example, some of the dolphins he studies in Australia’s Shark Bay use a dramatic fin-slapping method called “kerplunking.” Others use sponges as tools for hunting on the seafloor. Dolphins in Florida Bay trap fish inside rings of mud. The Cedar Key dolphins may help explain why these different methods arise and how they spread. Do they simply depend on a dolphin population’s habitat and prey? Or do they represent a kind of cultural tradition?

Gazda hopes to find a job that will let her keep studying the dolphins of Cedar Key and nearby waters. She thinks there are more driver-and-barrier groups waiting to be found. She wants to know how they teach each other the behavior. Does a barrier dolphin graduate to become a driver in its own group? Or are their roles set for life? And she wants to gather acoustic data to learn how the dolphins coordinate their hunts.

The question of communication was one Frank wondered about too, though he didn’t live to see the latest results published. Cox died in 2011. At the time, no one in his family could take his beloved German shepherd mix, Greta. So Gazda and her husband decided to adopt the dog. It made sense after all Frank and his family had done to help Gazda, she says. “If it wasn’t for him, this whole thing would not have started.”