Dan Esposito, a chemical engineer at Columbia University in New York, places his newly assembled energy-generating apparatus under a halogen lamp. Filled with salt water, the device looks like a glass cooking pot with a black lid adorned with four small solar panels. He connects the panels’ wiring to electrodes submerged in the water and flips on the lamp. Almost immediately, little bubbles begin to form and float up around the electrodes, as if the water around them is boiling.

Esposito’s device is no kitchen gadget, but a solar-powered tool to extract hydrogen from water. The glass pot is just a water container, but the buoyant black lid is a prototype hydrogen fuel rig.

The actual device, which will be thousands of times the size of the prototype, could one day float on the ocean’s surface, converting solar energy into an electrical current that breaks water into oxygen and hydrogen. While still in its early stages, this technology may be the solution to the long-standing challenge of creating a reliable and affordable source of hydrogen gas.

“So far, we only did it in lab settings,” says Esposito. “But it is a conceptual prototype.”

Unlike carbon-based fossil fuels, which generate carbon dioxide as a byproduct, hydrogen gas is a zero-emission fuel. When it burns, all that’s left behind is water. According to the US Department of Energy, a hydrogen fuel cell combined with an electric motor is two to three times more efficient than a gasoline engine.

But efficiently extracting hydrogen from naturally occurring compounds like methane or water has been a technological holy grail. 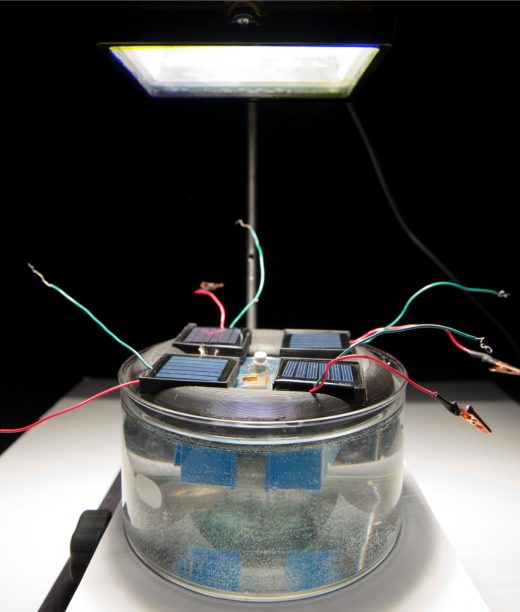 Hydrogen can be extracted from fresh water, but it’s a scarcer and more precious resource than seawater. Photo courtesy of Daniel Esposito

Scientists have been trying to crack hydrogen from water for more than a century. A Scientific American article from 1868 mentions water electrolysis, along with wind power and other ideas, as fossil fuel alternatives. But electrolysis, in which an electrical current is passed through water, itself requires energy, and existing technology fails to extract the hydrogen at an economical cost. Plus, the separated atoms of hydrogen and oxygen will recombine if allowed—often violently.

In the 20th century, scientists developed electrolysis devices for seawater that could separate hydrogen from water using fine membranes. But these contraptions were prone to clogging and biofouling.

“Magnesium and calcium ions precipitate and clog the pores of the membranes, and the microbes and other life forms attach to them,” Esposito explains. “You can purify them, but it adds cost.”

To solve this problem, Esposito and his team have created a first of its kind membrane-free hydrogen rig. In their design, the reactive sides of the electrodes, which do the actual work of making hydrogen and oxygen, face away from each other. As the electrical charge is applied and the water breakdown reaction occurs, hydrogen forms at the negative electrode, while oxygen congregates at the positive one, with both gasses naturally separated from each other.

This arrangement keeps the hydrogen and oxygen gasses far enough apart to prevent them from recombining into water molecules. Instead, the molecules float up along the vertical electrodes, forming bigger bubbles as they rise. At the top, the hydrogen is collected into a container while the oxygen is vented into the atmosphere—possibly adding a whiff of fresh air to Esposito’s basement lab.

Esposito says commercial seawater hydrogen production is still far on the horizon, but once the technology matures, the floating rigs would function somewhat similarly to oil rigs, without the fear of polluting spills.

If operating close to shore, the hydrogen could be brought to land in pipes. If the rig is in the deep sea, the gas would have to be pumped into tankers. Another possibility, Esposito says, is to use blimps or air balloons to deliver the gas, capitalizing on hydrogen’s natural buoyancy.

If we wanted to use offshore hydrogen production to replace all the oil used in the world today, the floating rigs would have to cover only a tiny fraction of the world’s ocean—about 162,000 square kilometers, Esposito says. That’s slightly smaller than Florida, and bigger than New York State—or about 0.032 percent of our globe’s surface.

“That’s all you need to power the planet with seawater and sun,” Esposito says.