Loggerhead turtles, such as these in the Sargasso Sea of the Atlantic Ocean, often take refuge in floating masses of sargassum. Photo by WaterFrame/Alamy Stock Photo

Tiny pieces of plastic in the ocean are killing juvenile loggerhead turtles, a new study shows, threatening the survival of the endangered species.

Wind, waves, and sunshine break down discarded plastic—from water bottles to fishing gear—into tiny pieces. About 90 percent of the estimated 150 million tonnes of plastic that litters the ocean measures less than five millimeters across, or about half the width of a pinky finger. Plastic like this can now be found littering a brown seaweed called sargassum, in which loggerhead turtles forage for food.

For the new study, Evan White of the New Materials Institute at the University of Georgia and his colleagues, in partnership with the Loggerhead Marinelife Center in Juno Beach, Florida, examined the gastrointestinal tracts of 52 turtles that died at only days or months old and found that 48 contained plastic. The plastic bits, which were up to a millimeter wide, were sometimes lodged in the turtles’ narrow, winding intestines, blocking the passage of food. The blockages were enough to cause the turtles to starve, says coauthor Charles Manire, a veterinarian who directs research and rehabilitation at the Juno Beach center. Often, plastic became stuck in the young turtles’ centimeter-wide stomachs.

Juno Beach is one of the world’s most densely nested sea turtle sites. One of every 20 loggerhead turtles on the planet starts its life here. (The global population includes about 40,000 to 50,000 nesting females.) During the hatching season of May through October, Manire and his colleagues walk the beach and monitor the turtle nests. This year, they found nearly 12,000 nests from four different species of turtles along 15 kilometers of beach. With each nest averaging 100 eggs, more than a million were laid here this year.

The beach is also littered with plastic. On a recent November survey, for instance, a team of center volunteers found dozens of plastic fragments, including pieces of straws, bottle caps, a comb, and even Chinese sausage packaging.

It is already known that larger pieces of plastic are harmful to turtles and that microplastic can be found in turtle nesting sites. But the impact of microplastic on baby turtles living in the open ocean has been harder to study.

From July 2015 to November 2016, Manire and his colleagues collected 97 “wash backs” —young turtles that made it offshore and into the sargassum but were blown ashore and stranded by a storm or high winds two to six months later. At this stage, the turtles weighed no more than a hockey puck. Most were loggerheads. 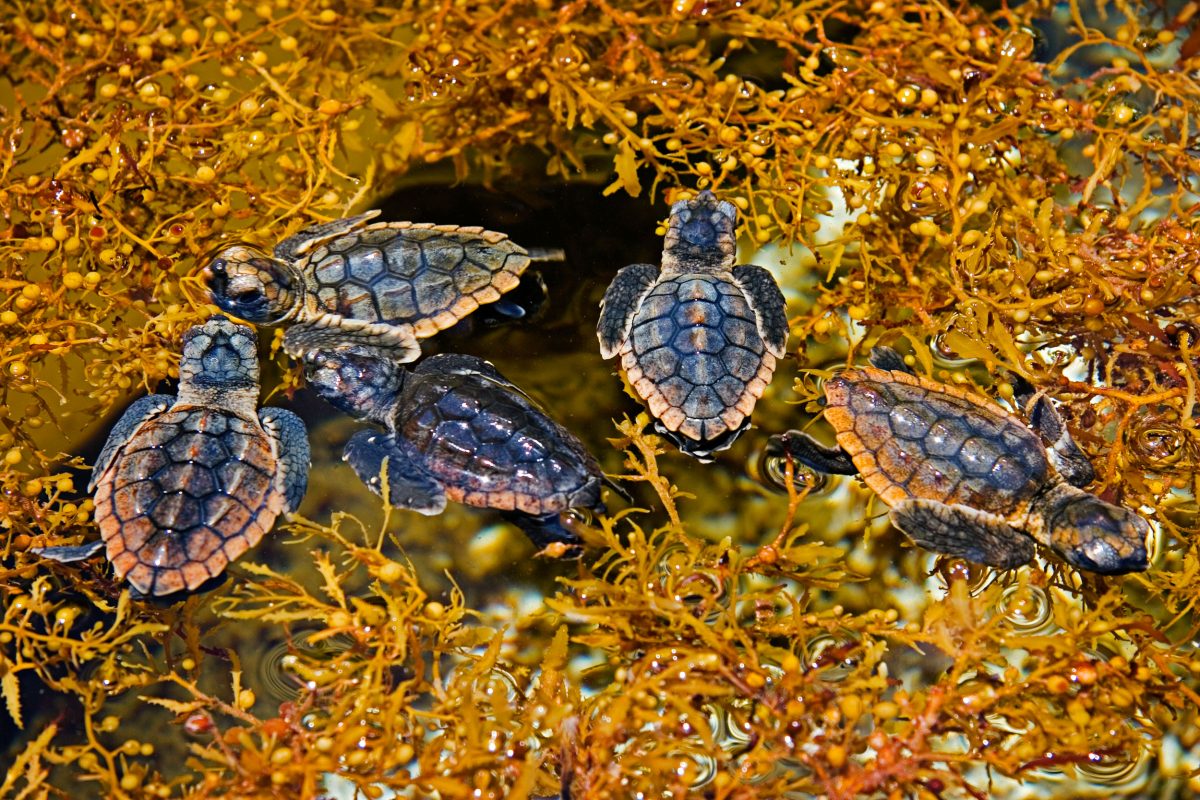 This group of newly hatched loggerhead turtles takes refuge in the sargassum. The algae also snags small pieces of plastic, which the turtles often ingest as they feed. Photo by WaterFrame/Alamy Stock Photo

The team rehabilitated and released 45 of these turtles after treating them for conditions like infection or dehydration and giving some of those with suspected plastic blockages an enema. The dead turtles were frozen to preserve their tissues, enabling researchers to perform necropsies during which they found the plastic in their gastrointestinal tracts. The plastic was just a tiny percentage of their body weight, but enough to kill them.

When he began working as a marine veterinarian 25 years ago, Manire would occasionally see plastic in turtles. Now, “it’s no longer a question of if they have plastic, it’s a question of how much.”

The research team is now studying turtle tissues to see if plastic might be harming the animals in other ways. Manire suspects that the chemical-loaded plastic probably also attacks the turtles’ immune systems and puts pressure on their gastrointestinal tracts, killing off tissue by robbing cells of blood and oxygen.

Loggerheads and other sea turtles have always had a high mortality rate: one in every 1,000 loggerheads is estimated to survive to maturity, even without plastic pollution to contend with. Manire thinks the death rate now is much higher. “It may be that the one in 1,000 number is now one in 100,000 or one in a million,” he says. The reptiles also face loss of nesting grounds from coastal development, accidental capture by fishermen, and the human harvest of eggs and meat.

The study’s findings show how serious the dangers of microplastic are to the survival of loggerhead turtles, says Jeanette Wyneken, a biologist at Florida Atlantic University who was not involved with the work. “[Plastics are] considered a pretty substantial threat to survival of the species.”