This is the first two-headed shark discovered from an egg-laying shark species. Photo by Sans-Coma et al.

While examining hundreds of Atlantic sawtail catshark embryos for a study on cardiovascular development, researchers in Spain noticed one with some unusual features: “Two heads, each of them with a mouth, two eyes, a brain, and five gill openings on each side,” says Valentín Sans-Coma, a zoologist at the University of Malaga who led the team that discovered the Cerberean shark.

“There were two hearts, two esophaguses, two stomachs, two livers, but only a single intestine,” he says. This phenomenon, known as dicephaly, had never before been documented in an egg-laying shark species. 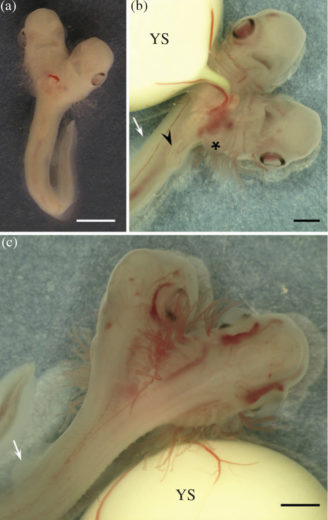 The two-headed shark embryo alongside its yolk sack. Photo by Sans-Coma et al.

Scientists have previously seen dicephaly in ovoviviparous (where eggs develop and hatch within the female) and in viviparous (live-bearing) shark species, but this is the first instance in an oviparous (egg-laying) species. The discovery suggests dicephaly may be more common in sharks than previously believed. Scientists still don’t know exactly what causes dicephaly in sharks, but Sans-Coma believes the cause is a genetic fluke rather than environmental conditions.

Scientists first described dicephaly in sharks in the 1930s, but it was reported in news outlets as early as 1838, says Michelle Heupel, a researcher at the Australian Institute of Marine Science who was not involved in the current study. Dicephaly has also been seen in other vertebrates, including reptiles and mammals.

To date, scientists have never seen a dicephalous shark survive to adulthood. “Survival after birth may occur, but would likely be very brief,” says Heupel. “It is unclear whether the two heads will preclude swimming and prey capture, and whether joined internal organs will function adequately.” Despite this lethality, she noted that such deformities are extremely rare and therefore do not pose a conservation threat to shark species.

Unfortunately, we’ll never know how long this embryo would have survived, because the researchers killed it as part of their study. Sans-Coma hopes that the histological sections and tissue samples that his team took from the embryo can help shed light on the causes of dicephaly in sharks.