Catching a glimpse of a diving whale’s tail flukes is a highlight of any whale sighting. Photo by Vladimir Vozdvizhenskiy/Shutterstock

In late April, residents of Nanoose Bay on southeastern Vancouver Island, British Columbia, gathered on the shoreline of a local park to observe a juvenile gray whale. For several days, they watched and waited, and were occasionally rewarded for their patience when mist erupted from the ocean surface like compressed air exploding from a giant barrel. The whale would take a deep breath, arch its barnacled back, and dive out of sight.

The sightings were brief, but memorable—not just because they happened to them, but because they didn’t happen to anyone else. On a normal day, the gray whale would have been shadowed by commercial whale watching boats. COVID-19 has changed all that.

The pandemic has constrained vessel traffic around the world, probably to the benefit of whales. Ship strikes can kill or injure, while underwater engine noise and a vessel’s physical presence can disrupt whales’ ability to feed, rest, socialize, navigate, and communicate. “Generally, less noise resulting from a reduction in all manner of vessel traffic right now is probably not a bad thing for the whales,” says John Ford, a whale researcher emeritus with Fisheries and Oceans Canada (DFO).

Commercial whale watching is not immune to COVID-19. The whale watching fleet from British Columbia and Washington State totaled about 138 vessels in 2019, according to Soundwatch, a program of the Whale Museum in Friday Harbor, Washington, which monitors vessel compliance in the San Juan Islands. That represents more than 500,000 customers annually.

But the pandemic has left the fleet docked.

In April, the Canadian government announced that all passenger vessels with a capacity of more than 12 passengers are prohibited from engaging in nonessential activities, including whale watching, until at least June 30.

Since then, the industry has conducted talks with Transport Canada aimed at getting the fleet back on the water, with the potential for British Columbia, perhaps through the Ministry of Health, deciding when to green-light commercial whale watching. The industry is putting together a blueprint for how that might happen, including staff training, frequent sterilization of vessels, and the wearing of face masks.

Meanwhile, whales in the Salish Sea are enjoying a rare respite from tourists and repeated boat traffic. That includes endangered southern resident killer whales, whose numbers have dropped from 98 in 1995 to an estimated 72 individuals.

The Pacific Whale Watch Association, representing Canadian and American companies in the Salish Sea, says the downside to COVID-19 extends beyond their lost revenues.

Every day the fleet is idled due to the pandemic, scientists cannot benefit from a GPS-based app developed by the industry in 2019 that provides real-time information on when and where whales are sighted. “That cannot be replicated by science, even on a good day,” says association spokesman Kelley Balcomb-Bartok.

Brad Hanson, a researcher with the US Northwest Fisheries Science Center, is among more than 20 scientists who have received permission to access the app’s data for specific study periods. “It is much more efficient,” he says. “I don’t like to go out and spend a lot of time searching for whales.” Such data can also help to track a sick whale or identify larger trends in whale numbers and species in the Salish Sea.

Mark Malleson has a foot in both camps: he is a veteran captain for Prince of Whales in Victoria, and does contract work for DFO and the Center for Whale Research in Washington State, mainly taking identification photos of killer whales. He documented the first fin whale in the Juan de Fuca Strait in 2005. “The whale watching industry is pretty unique in this part of the world,” he says. “We cover so much area and … have so many eyes out there.”

Individual whale watching companies also support conservation organizations through a variety of initiatives, including donating one percent or more of ticket sales or a fixed donation such as $2 per ticket, and offering free seats or free charters of vessels for education, fundraising, or research purposes. 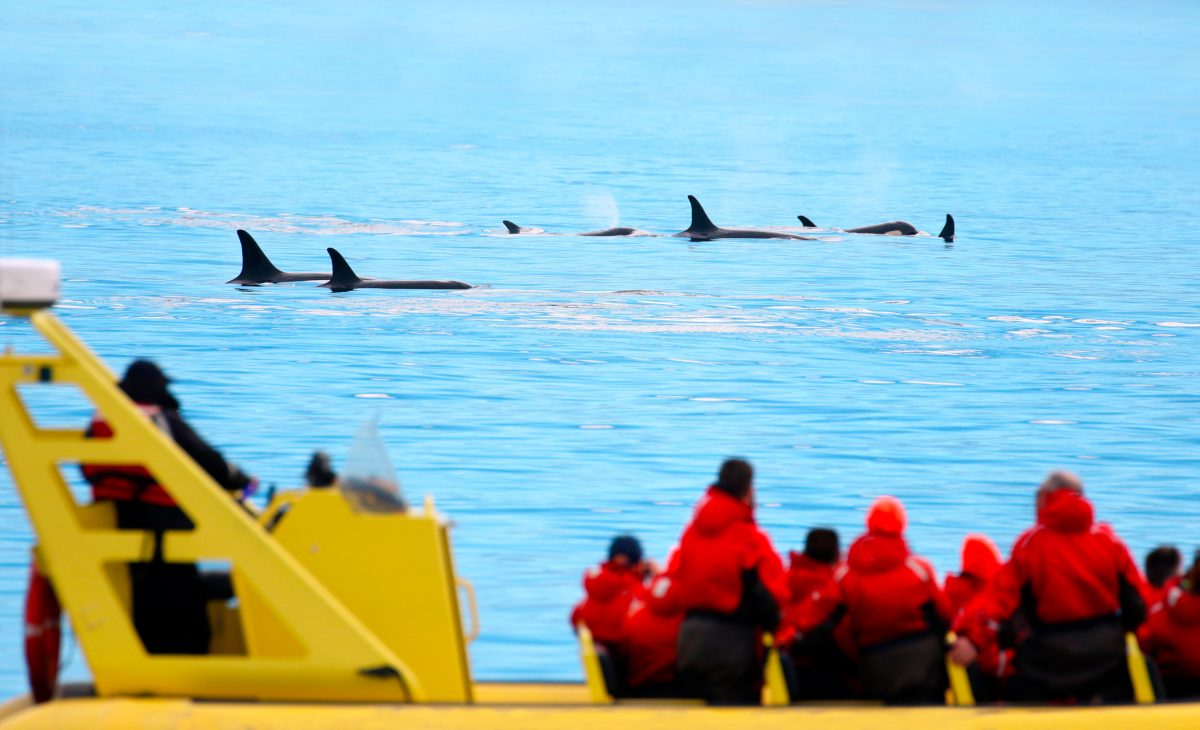 A pod of killer whales swims by a whale watching vessel in the Salish Sea, off Victoria, British Columbia. Photo by Birdiegal/Shutterstock

One major beneficiary is the Center for Whale Research, founded by Balcomb-Bartok’s father, Ken Balcomb. The center receives up to US $30,000 per year from whale watching companies, evidence of the intertwining of whale commerce and whale conservation. On the Canadian side of the border, the Vancouver-based Pacific Salmon Foundation reports that whale watching companies contributed about CAN $105,000 to the organization in donations and gifts in kind in 2019.

All of which offsets—but does not eliminate—the industry’s impact on whales.

“We need to embrace what’s best for the southern residents while still having a viable economy,” asserts Balcomb-Bartok. “I can’t say we are benign. It is a factor. Let’s find the best balance.”

The absence of data from the whale watching fleet comes at a time when whale researchers also struggle to get onto the water due to the pandemic.

Thomas Doniol-Valcroze, head of DFO’s cetacean research program on the west coast, says research by government organizations such as his own and the US National Oceanic and Atmospheric Administration has largely ground to a halt. Physical distancing can be problematic for boat crews, while going for fuel and handling study equipment carries the risk of contamination. Fieldwork by small organizations may still continue, he says, including using drones to document whales’ physical condition. Hydrophones are also collecting data on underwater sound levels resulting from reduced vessel traffic.

As for the whale watching industry’s contribution, he says: “Absolutely, there is going to be less data. Whether or not the absence of those data would compromise our efforts or understanding … long-term, I’m not sure.”

Ultimately, all manner of vessels, whether they contribute to research or not, can be disruptive to whales, Doniol-Valcroze concludes.

“Everybody who is honest knows that when you’re out there—whether you are a researcher or whale watcher or anything else—you’re having an impact on these animals. It all comes down to whether it’s worth the impact or not.”

It makes you wonder what the whales would say. A question left to humans to debate.