The first Americans would have moved down the rugged North American west coast in the shadow of the receding Cordilleran Ice Sheet, hopping from island to island and traveling by boat. Photo by Jason Briner

For more than 6,000 years, the ancestors of the first people to settle the Americas were confined in Beringia, a now-sunken landmass linking Asia and Alaska, behind a wall of ice that stretched thousands of kilometers across northern North America. The first to migrate to the Americas were the ones to get past the glaciers. Then, these migrants and their descendants spread across the continents, reaching as far as Tierra del Fuego, at the very southern tip of South America. Two new research studies add to the developing picture of how this may have happened.

For decades, archaeologists overwhelmingly adhered to the idea that America’s first migrants passed south through an ice-free corridor just east of the Rocky Mountains. The passage opened between the Cordilleran Ice Sheet, which covered the Pacific coast, and the Laurentide Ice Sheet, which covered most of what is now Canada and the northern United States. But recent research supports a competing hypothesis: journeys made by the first Americans may have been a little more nautical.

Their chance to leave Beringia would have come when an ice-free path opened up on the islands and coastline of western North America. Hopping down the coast in boats, moving past the ice, those first settlers and their descendants spread south.

Alia Lesnek, a glacial geologist at New York State’s University at Buffalo, was part of a team that helped pinpoint when the coastal Cordilleran Ice Sheet retreated far enough to let the migrants pass. Using beryllium-10 dating, a technique similar to radiocarbon dating that works on non-organic samples such as rock, the team calculated when and where coastal glaciers melted, permitting passage.

Beryllium-10, an isotope of the element beryllium, is produced when cosmic rays moving at near the speed of light arrive from interstellar space and strike bare rock. Despite their vast journey from far-off supernovae, cosmic rays cannot penetrate ice. So by measuring the amount of beryllium-10 in a rock, geologists can calculate how long it has been exposed and not covered by ice.

Lesnek and her team found that the Cordilleran Ice Sheet retreated at sites from southeastern Alaska to British Columbia about 17,000 years ago, paving the way for the first Americans to move south along the coast. 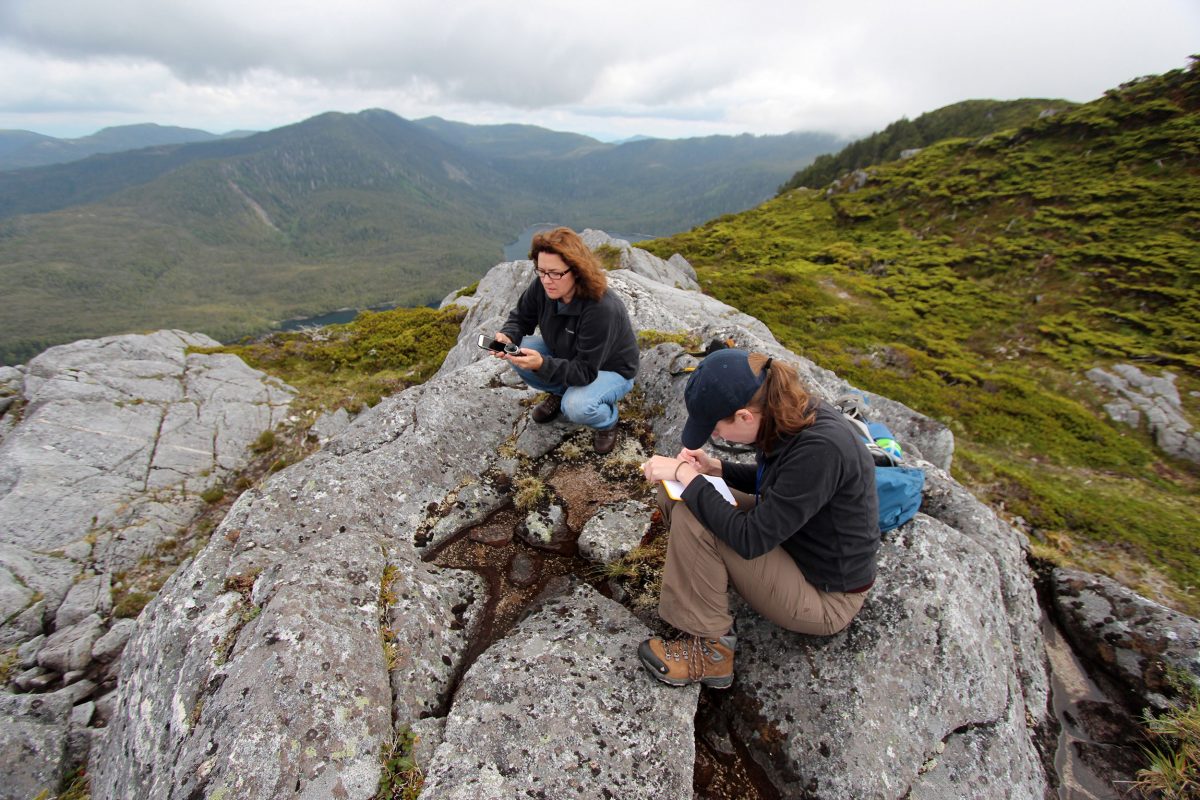 Glacial geologist Alia Lesnek, right, and her team used the remnant signals of cosmic rays to calculate when and where the glacial ice first retreated. Photo by Jason Briner

People are interested in our shared human origin and how we as a species have moved around the planet, says Lesnek. “This study is a small piece of that puzzle.”

Her team’s result fit nicely with existing genetic research that estimates the first settlement of the Americas took place about 16,000 years ago. But what happened after that initial settlement has been something of a mystery because genetic samples from ancient Indigenous people—critical to showing patterns of historic movement—are elusive.

In a second recent project, however, a team of anthropological geneticists that includes Christiana Scheib from the University of Tartu in Estonia, and Ripan Malhi of the University of Illinois at Urbana-Champaign, studied genetic material drawn from the skeletal remains of ancient Indigenous people from California’s Channel Islands and southwestern Ontario. The research team obtained permission from local Indigenous groups in these areas to take the genetic samples.

The study focused primarily on sequencing the genomes of these two groups of ancient people to determine their ancestry. The study also included some previously sequenced ancient genomes from across the Americas.

Cooperation between the researchers and Indigenous groups led to the researchers being able to study the DNA from 91 ancient people, which is more than 10 times the number of ancient American genomes that have been available for studies in the past. As more ancient genomes become available, scientists may be able to answer more detailed questions about how different groups of people moved around the Americas, founding the continents’ vibrant Indigenous cultures and inventing hundreds of new languages.

Jennifer Raff, an anthropological geneticist at the University of Kansas who was not involved in the study, believes the new genetic research is an important step in understanding the history of the Indigenous people of the Americas.

“The sheer number of ancient genomes [the researchers] were able to contribute … that’s what we need to really understand the nuances of the very deep population histories,” she says.

The idea that the first Americans followed a coastal route south from Beringia is displacing the hypothesis that they migrated through an ice-free corridor in the continent’s interior. New research is showing when and how they likely made the journey and where they went once past the wall of ice. Animation by Judy Somers

Using this genomic data, Malhi says he and his colleagues can begin to “fill in this large gap of what happened right after the initial peopling [of the Americas] up to European contact.”

“There’s 13,000 or 14,000 years that has largely been ignored,” he adds. The new data helps reveal how people moved around the continents in the intervening millennia.

The study shows that the people who initially settled the Americas soon separated into two groups, a northern group and a southern group, that did not intermingle and exchange genes for perhaps as long as 1,000 years. Yet, surprisingly, modern North American and South American Indigenous peoples are related to both groups, but the proportions of DNA from each group differs.

For example, the genomes of people who lived in California’s Channel Islands and near Monte Verde, Chile, one of the oldest archaeological sites in the Americas dated to more than 14,000 years ago, showed more shared ancestry with the northern group. Genetic analysis of ancient remains recovered near Anzick, Montana—from a person known as the Anzick child, a 12,600-year-old member of the Clovis culture that dominated North America from about 13,000 to 12,000 years ago—showed more southern group ancestry.

The genetic research unveiled two possibilities for how these groups moved around. They may have split apart for a time, rejoined elsewhere in North or South America, and then spread out across Central and South America. Or, one group of people may have sped south along the Pacific coast and were later rejoined by the other group.

“People moved around a lot in the past,” says Scheib. “We tend to think of the past as fixed … but actually there was a lot of mobility.”