It’s hard to smell them underwater, but corals, like all living things, release a range of volatile chemicals. Photo by Matt Nitschke

Just after sunset early last December, Caitlin Lawson beheld a magnificent spectacle. As it happens every year after the November full moon, mature corals on the Great Barrier Reef in Australia synchronously spewed eggs and sperm. The larvae produced in this annual spawning would eventually settle and start dividing to seed new polyps. While the larvae are still waterborne, it looks “like an underwater snowstorm,” Lawson says. “All these nutrients and activity in the water. The sharks are swimming around, the fish are going crazy—it’s just an incredible display of life.”

Lawson, a marine biologist at the University of Technology Sydney in Australia, wasn’t there for the reproductive display. Instead, she’d come equipped with small plastic containers rigged with tubing to collect the gaseous, smelly chemicals that the corals—and their algal and bacterial symbionts—release before, during, and after this procreative drama.

Using advanced analytical chemistry techniques, Lawson and her colleagues are working to identify the spectrum of volatile chemicals the corals produce under different conditions. They hope that measuring these gaseous compounds can give them a way to assess the corals’ health.

All living things release volatile chemicals, and many species have adopted specific volatiles as communicative signals. Scientists have long studied their function in terrestrial organisms. A plant’s volatile emissions might indicate to nearby flora that an insect predator has alit, for example, or they might be used to attract another species that feeds on that predator. Detecting these chemicals also has medical uses—think of dogs sniffing out cancer or perhaps even COVID-19.

But volatiles emitted by underwater organisms are largely uncharacterized. “We are playing catch-up to the terrestrial world because it’s slightly harder to work underwater than on land,” Lawson says. So she and her colleagues are studying the range of volatile chemicals produced in the marine environment, and they’re starting with corals. In a recent study, the scientists described how they detected 87 volatile chemicals being dispersed by two species of coral, Acropora intermedia and Pocillopora damicornis. 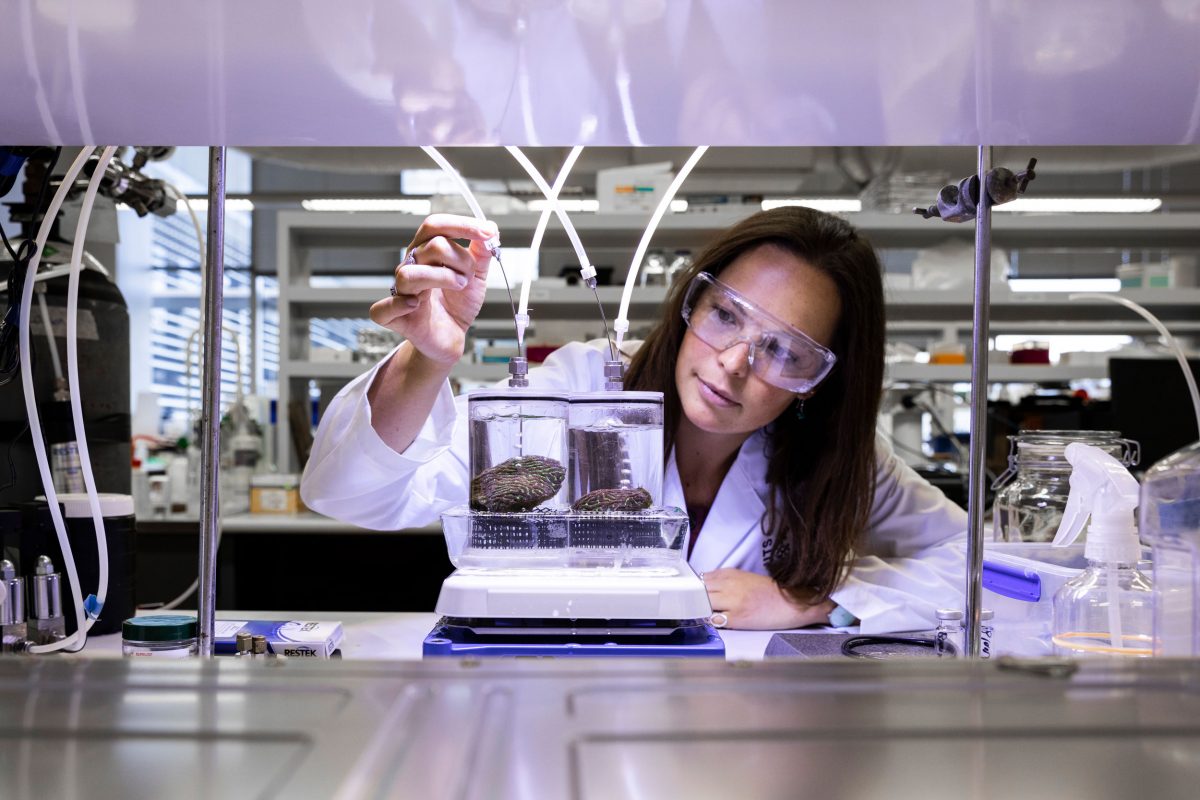 In the lab, marine biologist Caitlin Lawson is working to identify the various volatile chemicals that corals emit, as well as studying how they are affected by changes in temperature. Photo by Andy Roberts

“It’s the first really high-quality documentation of the volatiles that are produced by corals,” says Debashish Bhattacharya, a coral genomics researcher at Rutgers University in New Jersey who wasn’t involved in the work. Characterizing what those chemicals are and what kind of job they might be doing is important.

Many of the volatiles Lawson and her team identified are implicated in climate regulation, so any variation in the chemicals emitted by corals on the Great Barrier Reef—which extends over about 350,000 square kilometers, and stretches the equivalent of the distance between Vancouver, British Columbia, and the Mexican border—may well influence weather features such as local cloud cover.

“It’s important that we understand the various sources and sinks of the different chemicals that are getting released into the atmosphere if we want to model climactic processes,” says Lawson. “I think this is a potentially huge source that, so far, we have overlooked.”

In turn, climate change may affect the release of volatiles. Lawson and her colleagues also found that when they subjected corals to heat stress in the lab, by gradually raising the temperature of the water by 5 °C, the level of volatiles—as well as their diversity—plummeted.

But as the detection of key volatile chemicals has been shown to indicate signs of disease in other creatures, teasing out the biological functions of the chemicals corals emit may also allow researchers to one day identify a specific volatile cocktail that signifies coral stress. That would be valuable, explains Colleen Hansel, a marine biogeochemist at the Woods Hole Oceanographic Institution in Massachusetts who was not involved in the work, because researchers currently have to monitor stress through visual markers, such as lesions or bleaching, that only reflect damage that has already occurred.

Lawson is also excited to investigate how corals might use volatiles to communicate. Do they use chemical cues to signal spawning or other major events? Can a coral colony experiencing stress convey the message to another colony—or to other marine organisms? “This is still very much in the baby stage of research,” Lawson says. “There’s so much to explore.”