In Portland, Oregon, the use of tear gas and other chemical munitions by police has some concerned about their effects on human health and the environment. Photo by John Rudoff/Sipa USA/AP Images

Juniper Simonis was radicalized on July 10, 2020, in Portland, Oregon. That’s the date, Simonis says, that—while they were chalking the property line of a federal building to show protesters where to stand—unidentified federal agents grabbed them and their service dog, Wallace, and held them for nine hours without food, water, or access to a phone.

Simonis, an ecologist and lead scientist at Dapper Stats, a data analysis firm for field scientists, has been a long-time supporter of the Black Lives Matter movement. They had been taking part in protests and demonstrations in Portland this summer, enduring a barrage of tear gas, pepper spray, and flash bang grenades from police and federal agents. Being detained galvanized them to start looking for other ways to get involved in the movement—ways that would put their specific skills to use. It was when Simonis saw the residues from chemical munitions being hosed off the streets and into storm drains that they were struck with an idea.

“I thought, Oh fuck, those are storm drains that go right to the Willamette River,” Simonis says. “How is that affecting the ecosystem?”

Since many scientists are focusing on the human health effects of these munitions, Simonis thought that studying their environmental and ecological effects would be the best way to help.

“It’s kind of ridiculous that this is what’s bringing me back into the field,” they say.

Though protests this year against racial injustice have spanned the United States (and the world), Portland, a city with a pronounced racist history, has been one of the epicenters. By the end of July, local police and federal law enforcement agencies had used tear gas and other riot control agents almost every day for two straight months, and the residues were often washed down storm drains. But little is known about the fate and ecological effects of the chemicals in these munitions, says Katherine von Stackelberg, an environmental health scientist at Harvard University in Massachusetts.

Tear gas, also known as CS gas, is a complicated compound. It has different chemical constituents depending on the manufacturer, but the main ingredient is 2-chlorobenzalmalononitrile. The one known study on the effects of CS on aquatic organisms, von Stackelberg says, found that concentrations as low as 0.2 to 0.3 milligrams per liter could kill rainbow trout. That’s an extremely low concentration, von Stackelberg says. The other potential toxicants in CS tend to only have effects at around 1,000 milligrams per liter.

“There is not a lot of data on it, but we know the primary constituent found in most tear gas will be acutely toxic to aquatic organisms,” she says. “Whether the Willamette River is at risk, I don’t think we can go that far, but the potential for it is certainly there.”

Then there are the degradation products: the compounds that result from the main chemicals in the munitions breaking down. And a canister of tear gas will also hold a whole stew of accelerants and aerosolizing agents. Other chemical munitions that are being used, such as hexachloroethane smoke bombs, which contain zinc, present different threats. With the chemical munitions being used night after night for months, there is also a potential for longer-term effects, says von Stackelberg.

Simonis is trying to fill in those gaps by digging up exactly what the existing scientific literature has to say, and by conducting controlled toxicity studies in a lab they built in their garage. 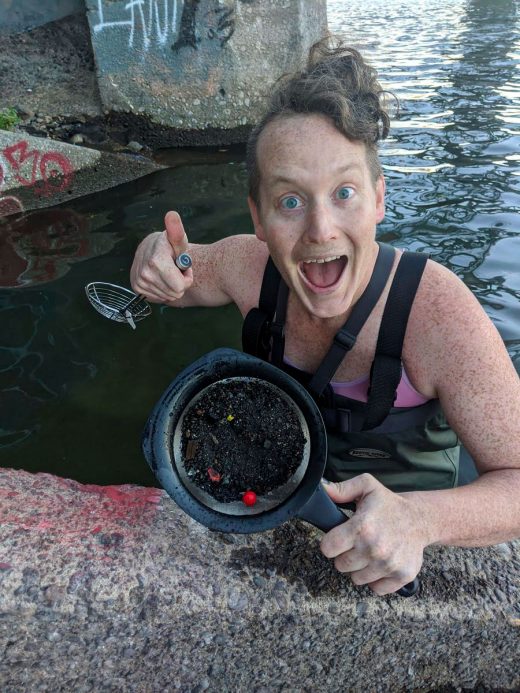 Juniper Simonis has taken the initiative to study the ecotoxicological effects of chemical munitions, such as this pepper ball they found in a local river. Photo courtesy of Juniper Simonis

“I want to find out what is in each canister, and how it mobilizes and decomposes,” Simonis says. They are also collecting evidence that the chemicals are indeed reaching waterways. Simonis has found spent munitions in culverts that empty into the Willamette River—some of them just downstream from a restored salmon-rearing habitat.

The legality of washing the chemical residues of these munitions into storm drains is not in question. Official safety documentation for CS gas states that it should not be allowed to get into drains or bodies of water, and Oregon state law says that any chemical munition should be treated as hazardous waste and cleaned up appropriately.

Portland’s Bureau of Environmental Services has cleaned out several storm drains in the area where the munitions were used. The bureau could not gain access to one storm drain, however, which was behind an illegally erected barrier around the federal courthouse. The city has issued a US $20,000 fine to the federal government for denying access to the drain, but it is not clear if or when the barrier will be removed. In its samples, the bureau found elevated levels of several contaminants in the storm water and sediments, but determined that the levels had returned to normal before reaching the river.

Nevertheless, Portland mayor Ted Wheeler issued an executive order on September 10 banning the use of tear gas for crowd dispersal in the city, in part because of the risk to the environment.