In 2004, Chris Fallows noticed something peculiar in the open ocean south of Cape Town, South Africa. As the owner of a dive company, Fallows spends hundreds of days each year taking tourists to see the area’s great white sharks. Fallows knows these waters. He knows when something looks odd.

As Fallows watched, an adolescent Cape fur seal chased down and killed a 1.2 meter-long blue shark. The battle lasted for more than 15 minutes, but in the end it was the seal that prevailed. It ripped open the shark’s abdomen and ate its internal organs, leaving the rest of the corpse to sink deep into the big blue.

Fallows had never seen anything like it, and he wouldn’t again for another eight years.

In December 2012, Fallows again watched as another adolescent Cape fur seal chased and killed not one, but five blue sharks over the course of two hours. The largest shark Fallows watched die was nearly 1.5 meters from nose to tail. Cape fur seals aren’t much bigger: male seals average just over two meters, while females are two-thirds as long. As before, the seal ripped the sharks open and fed only on their internal organs. 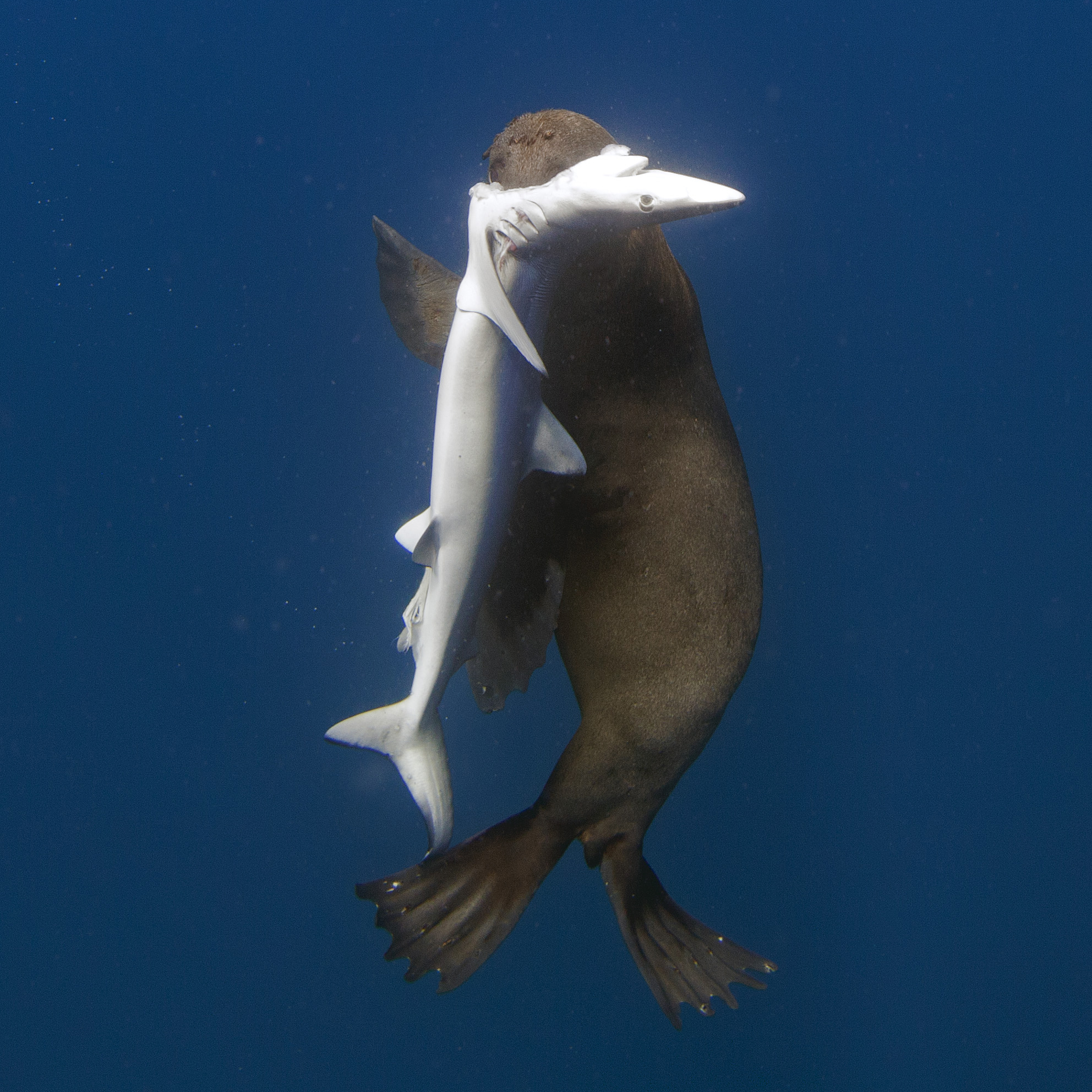 In times of plenty, only eating the heartiest parts of prey is a good strategy. Photo by Chris Fallows

For shark scientist Neil Hammerschlag, who worked with Fallows to interpret his sightings, the 2012 observations especially suggest that the seals aren’t mistaking the blue sharks for something else. “There was some intent,” says Hammerschlag.

The observations add an unexpected tangle to the food web.

According to Fallows’s study, the event was a rare display of “asymmetrical intraguild predation.” Cape fur seals and blue sharks are part of the same “predatory guild” because they both usually prey on the same things: small fish, cephalopods, and the occasional seabird. It’s reasonable to expect the two species to compete over the same food, but what’s a seal doing hunting blue sharks, some of which can grow larger than the seals themselves? The researchers say that it’s the first scientific documentation of this sort of predation by seals of sharks.

But Chris Lowe, a shark researcher in California, says he sees that sort of thing all the time.

“It’s pretty common here in California. California sea lions will kill five-foot-long [1.5- meter] leopard sharks,” he says. “Over the course of one summer I watched one bull sea lion basically knock an entire aggregation of leopard sharks down to nothing.” Similar to the Cape fur seals, the closely related sea lions only eat the sharks’ livers.

If Lowe is right, and seals actually eat sharks all the time, then why hasn’t Fallows seen it more often? (Nor, presumably, have the other scientists who let Fallows and his colleagues claim to have documented the first instance of this sort of pinniped-on-shark predation?)

One reason, says Lowe, is that both seal and blue shark populations in South Africa are starting to recover. “When you have fewer numbers of both seal and shark populations, the probability of one eating the other may be already lower, let alone somebody seeing it,” says Lowe. But now that both groups of predators are recovering from overhunting, those odds seem to be increasing.

The local resurgence in blue shark populations could also explain the seemingly odd choice by the seals to only eat the sharks’ organs, says Fallows and colleagues. When there’s plenty of food to go around, it makes sense for predators to eat only the most nutritious parts of their prey before moving on to the next, rather than waste their energy digesting less valuable parts.

If it turns out sharks actually are a routine part of Cape fur seals’ diets, then that means scientists will have to redraw their conception of the South African marine food web.

“When we try to predict the responses of animals to human threats [like] overfishing, habitat destruction, or climate change, you have to know how all the animals interact with each other,” says Hammerschlag. And it seems as if an important relationship among the ecosystem’s predators has gone unnoticed until now. “There’s still a lot to learn about the ocean and we need to keep on looking,” he says.