Amid the krill and fish eggs, researchers found various types of microplastics in the Icelandic fjord Ísafjarðardjúp. Photo by Erica Cirino.

On the turbulent sea, white-capped waves blur into the distant snow-dusted mountains and the icy air bites at exposed skin. In the unforgiving conditions, Belén García Ovide braces herself against the wooden railing of the Ópal, scanning the wild sea for whales.

The dramatic slope in the coast of the Snæfellsnes peninsula** is well known for attracting hungry whales. And after taking a look at the ship’s fish finder, it’s clear why. Two red stripes—one thin and high, one low and thick—reveal the locations of planktonic prey and predatory fish, both of which attract different species of whales. Despite this availability of food, research points to a bleak future for cetaceans in Iceland and around the world.

From filter-feeding baleen whales like humpbacks and fin whales, to toothed sperm whales and killer whales, all are consuming enormous amounts of plastic. The debris blocks their digestive tracts and, scientists suspect, delivers toxic chemicals into their bodies. But no one quite understands why whales are eating plastic in the first place—or precisely what these toxicants do to their bodies.

To find out, Ovide, a scientist and sailor from Iceland, organized an expedition into the country’s whale-rich northern waters.

On the way to the gaping, frozen mouth of the fjord Ísafjarðardjúp, near Snæfellsnes,* Ovide and three biologists on board spot what they are after: amid several steel fishing vessels bobbing in the water, spooling in their longlines, are more than a dozen killer whales, a sperm whale, and a minke. The next day, when the ship was approaching Ísafjarðardjúp, several humpbacks also appeared. 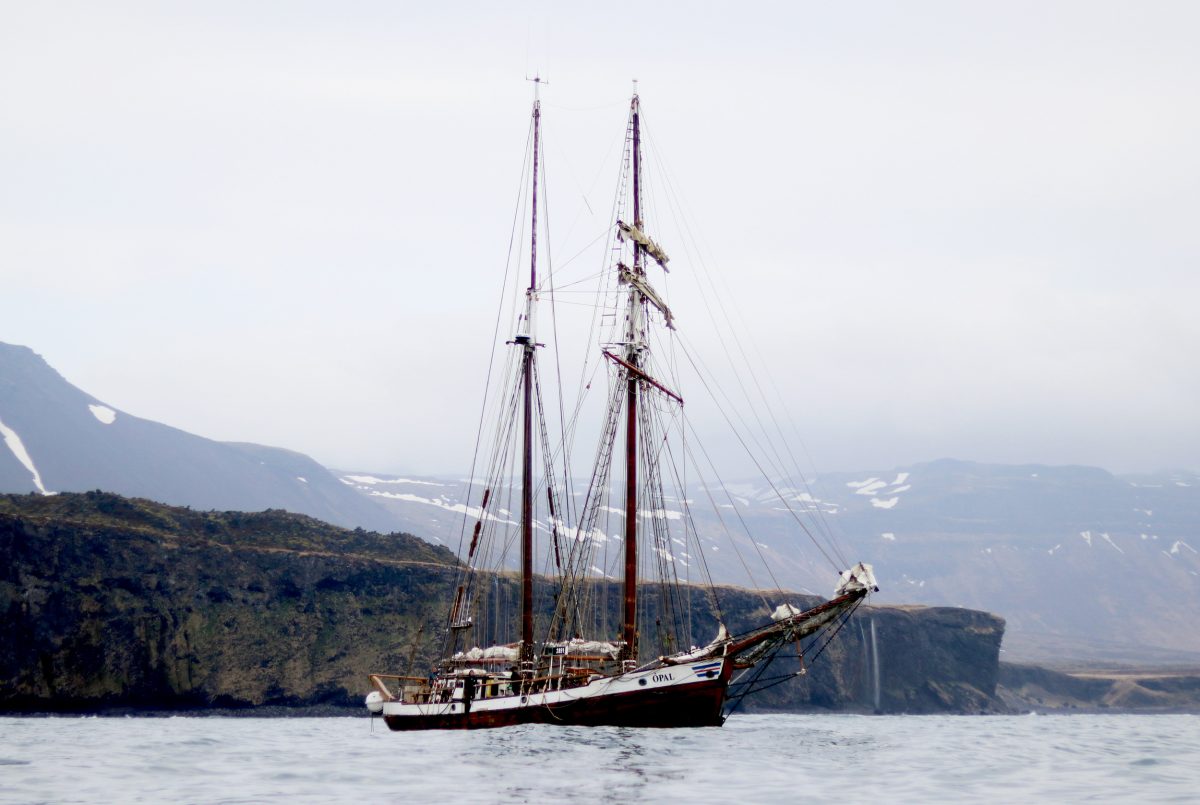 The Ópal anchored off Arnastapi, near the Snaefellsnes peninsula. Photo by Erica Cirino

Charla Basran, a Canadian marine biology doctoral candidate at the University of Iceland in Húsavík, is aboard the Ópal as a whale expert. She says Ísafjarðardjúp is deeper than an average fjord, as is the water at the tip of the Snaefellsnes peninsula. The topography drives an upwelling of cold, nutrient-rich water that stimulates the growth of algae and plankton. An unusual confluence of warm Atlantic and cold Arctic currents also seems to attract marine life. “Where there’s plankton and fish, whales and fishermen follow,” she says.

From the water, Torsten Geertz-Hansen, with the Danish NGO Plastic Change, pulls in a broad-winged device that had been dragging alongside the Ópal for the past half hour. With its wide wood-framed mouth and long net tail, the trawl loosely resembles the manta rays after which it is named. Devices like this are used to skim microplastics off the sea’s surface.

Geertz-Hansen wrestles the manta trawl on deck, emptying its contents into a stack of fine metal sieves. Combing through the debris, he pulls out a pile of orange krill and clear capelin eggs—then several shreds of monofilament fishing line and threads of synthetic blue rope, thin pieces of plastic film, and various hard plastic fragments. He calculates an average of 8,125 pieces of plastic per square kilometer just outside the mouth of the fjord. 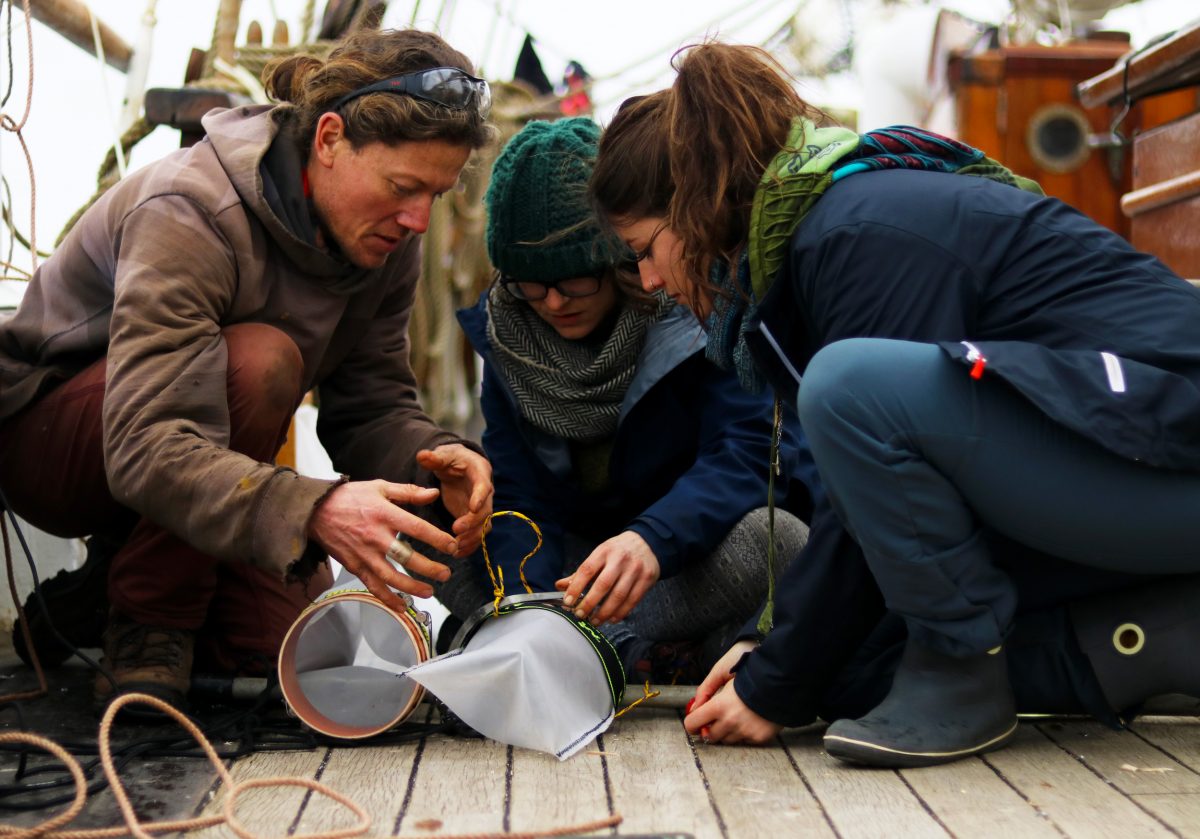 A filter-feeding adult humpback draws in nearly 19,000 liters of water and one and a half tonnes of krill each day, says Basran. “Imagine how much plastic they trap.”

Few researchers have studied if there is some force—oceanographic or otherwise—that is causing plastics and whales to accumulate in the same spaces. Experiments by scientists at the University of Siena in Italy, suggest that might be the case for the northwestern Mediterranean, where cool offshore ocean currents appear to carry both nutrients and microplastics into a key fin whale feeding ground in the Pelagos Sanctuary for Mediterranean Marine Mammals.

“There could be something else going on here with the currents that’s causing plastic to build up where whales feed,” Geertz-Hansen says. “Or it could simply be that there are a lot of fishing boats with a lot of plastic gear.”

If it’s clear whales are eating microplastics, says Sarah Nelms, a postdoctoral researcher at the University of Exeter in the United Kingdom, a key question becomes: what are microplastics actually doing to these animals?

In her own studies, Nelms has found microplastics in the guts of 50 marine mammals from 10 different species stranded around the coast of the United Kingdom—every animal she and her team examined.

“It’s not necessarily the mechanical problem of having microplastic in the body,” Nelms says. “It could be the chemical problem, of the toxins microplastic tends to harbor.”

The research team aboard the Ópal had hoped to collect flesh samples from a few whales, to check for toxicants that could indicate they’d consumed microplastics. But those experiments fell victim to foul weather—the sea was too rough, making it too dangerous for the crew to approach the whales closely enough to biopsy them.

If the Ópal team could have gotten those samples, Nelms says, they could have looked for the presence of toxicants specific to the plastic manufacturing process. 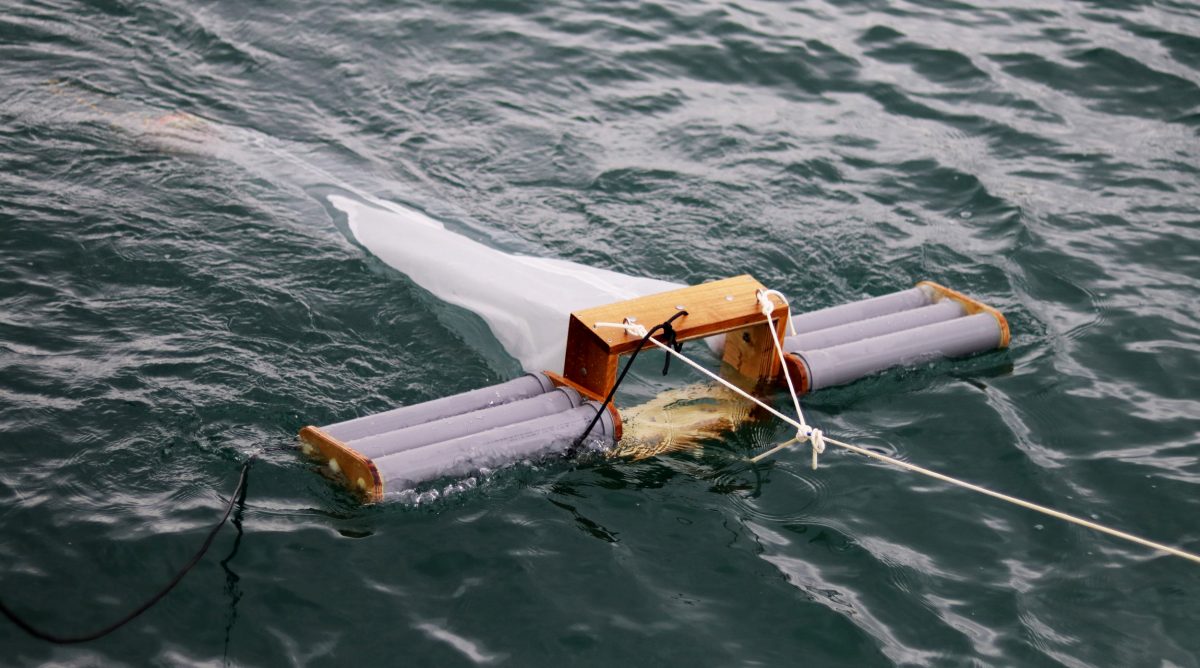 The manta trawl is pulled through Ísafjarðardjúp alongside the Ópal to collect microplastics floating near the sea surface. Photo by Erica Cirino

“There are toxic chemicals in seawater in general, and microplastic often absorbs these chemicals,” she says. But some toxicants, like phthalates, degrade quickly in seawater. Phthalates in whale flesh can only have come from plastic.

In humans and other animals, phthalates are known to cause hormone problems and cancer. The accumulation of toxic chemicals in ocean predators—including Arctic killer whales—leads to illness, major reproductive problems, and, scientists expect, future population collapse.

As the late-day sun falls over the fjord, the crew wraps up its research on deck and plunks into the galley for dinner. Plates of garlic-roasted potatoes topped with fillets of baked cod—caught in the fjord—are passed around the table. After spending the day watching bits of microplastic being pulled from the same water, the fish raises some questions—though it looks and smells delicious.

“Should we check the cod stomachs for plastic?” Ovide asks. “I made sure to save them so we could analyze them.”

*Correction: This article originally said that more than a dozen killer whales, a sperm whale, a few humpbacks, and a minke were all spotted in Ísafjarðardjúp. In fact, some of the whales were seen en route to the fjord, near the Snæfellsnes peninsula.

**Correction: Added a number of references to the Snæfellsnes peninsula, sometimes in place of previous references to Ísafjarðardjúp.