A quick flip makes everything about this red-belted anthias look wrong. Photo by Kagii Yasuaki/Minden Pictures

There is no up or down in space, yet in shows like Star Trek, ships are always oriented the same way: right side up. It’s a scientifically unnecessary trope that has become a running joke among science fiction fans.

Yet here on Earth, fish find themselves in a strikingly similar situation. As a fish glides through its weightless, three-dimensional, watery world, it almost always stays right side up. The question—for both starships and fish—is why?

It’s an easier question to answer for fictional spaceships than real-life fish.

In movies or on television, directors show ships the way they do because it makes the scene more understandable to viewers, creatures accustomed to a gravity-bound world. “We have a fixed idea that everything should be right side up,” says Frank Fish, a functional morphologist at West Chester University in Pennsylvania. But what about fish? It’s a puzzle.

“I can’t get into the mind of a fish—despite my name—and determine why it would particularly do that,” says Fish.

Deepening the mystery is that scientists know few reasons why a fish would swim in any particular orientation—yet they clearly have a preference. Unlike land animals, fish don’t push against the ground to move. And, while moving, fish are no more streamlined in one orientation than another. What’s more, most fish are top heavy, says Brooke Flammang, who studies fish biomechanics at the New Jersey Institute of Technology. Like a child balancing on a beach ball in the pool, gravity wants them to flip. So why don’t they?

The leading explanation is that fish began life right side up, evolutionarily speaking, and so most never had a reason to change. “Just between us, yeah, they never bothered,” says Milton Love, a semi-retired marine zoologist at the University of California, Santa Barbara.

A fish’s preferred orientation “goes back to those very early steps of building a left side and a right side, a head end [and] a tail end,” says Peter Wainwright, who studies fish morphology and behavior at the University of California, Davis.

There are two groups of animals that have distinct left and right sides, Wainwright says. The first group, protostomia, includes most invertebrates, like insects and mollusks. Early on in development, as embryos, these animals develop a cavity that goes on to become the mouth. In the second group, deuterostomia, which includes vertebrates such as fish and humans, embryos develop differently. In this case, the first depression to form becomes the anus.

This slight initial difference means the two groups develop in opposite orientations. The flip determines which side of the animal becomes its top (dorsal) and which becomes its bottom (ventral), as well as where the nerve cord runs, says Lauren Sallan, who studies early vertebrate evolution at the University of Pennsylvania.

In most invertebrates, the nerve cord runs down the belly. The nerves have little difficulty connecting to the eyes and brain, which are more dorsal, since invertebrates don’t often have hard parts inside their bodies to get in the way, Sallan says.

In contrast, even the most primitive vertebrates have hard tissues, such as bones, that form internal barriers within the body. As a result, their body plan is much less adaptable. The nerve cord runs along the animal’s back and its brain develops on its dorsal side to link to the nerves. Since the eyes are in the skull near the brain, they end up on top as well. With the top of the body unavailable, the stomach and mouth end up on the bottom. 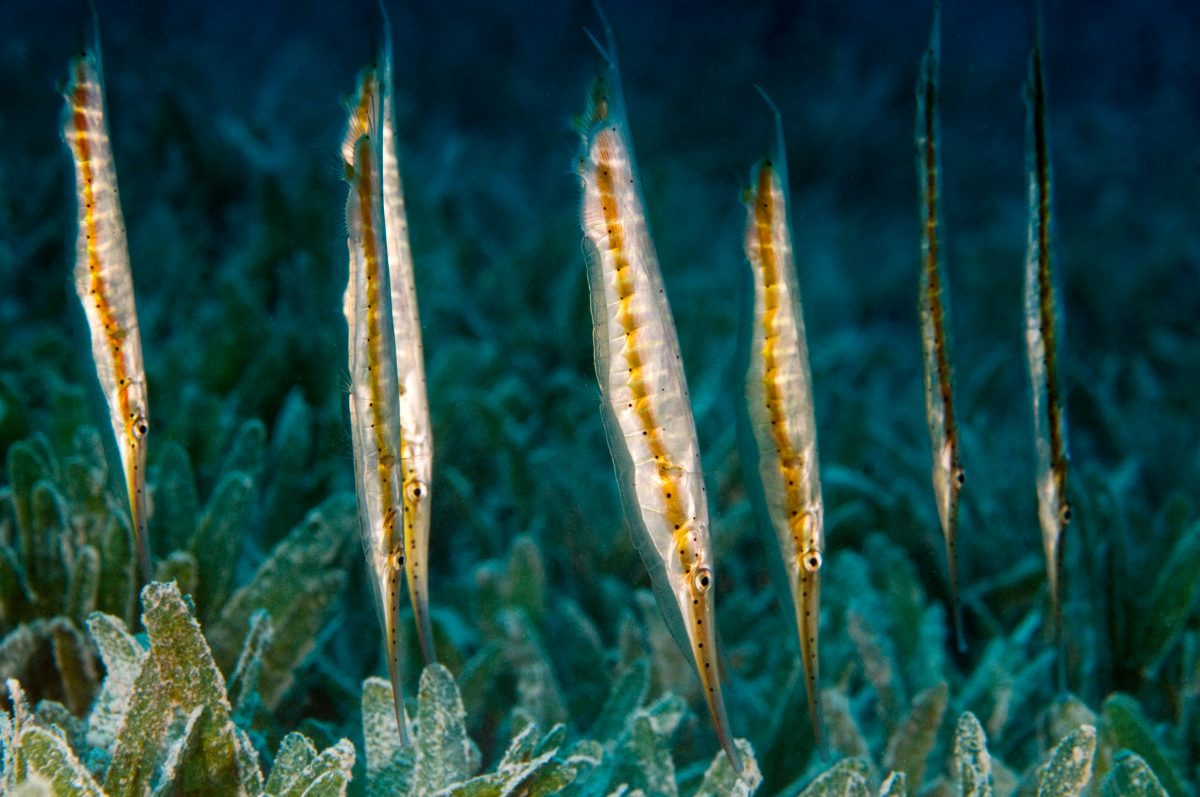 The shrimpfish swims vertically to blend in with sea urchin spines and coral branches. Although its anatomy is highly specialized, “there’s nothing really flipped over,” says Lauren Sallan of University of Pennsylvania. Photo by Dray van Beek/Minden Pictures

Sallan is not sure what led to the change, but it heavily influenced vertebrate evolution. “It’s an early coin flip that’s become a major constraint in fish form,” Sallan says.

The question, then, is why did fish stay dorsal side up? The answer lies in the basic tenets of evolutionary theory: if a new trait doesn’t provide a distinct advantage, things tend to stay the same.

Scientists have teased out some of the perks to swimming top side up. For example, gravity will help move blood from the brain back to the heart, says Flammang. Fish also benefit from having their eyes above their mouths, says Love, as it keeps those sensitive organs away from food and debris, and on the lookout for predators. Even their top-heaviness confers fish some benefits: it increases their maneuverability, Flammang says.

And, some fish have learned to swim upside down, while others flirt with the idea.

Many fish that live near structures such as reefs or piers will orient their bellies against vertical walls or even ceilings, says Wainwright. The fish seem comfortable swimming this way near the structures, but they will swiftly turn right side up when they swim away.

A group of African catfish have fully embraced upside-down life. Their behavior is the result of a bottom-dwelling fish adapting to take advantage of oxygen-rich water near the surface. A catfish’s mouth is on its underside, so it was likely easiest for the fish to simply turn upside down and treat the top of the water the same as they used to treat the bottom says Lauren Chapman, who studies fish respiration at McGill University in Montreal, Quebec. “To an inverted catfish, the water’s surface is just another substrate,” she says.

But in the vast majority of cases, says Love, “there’s no selective advantage for most fishes to be upside down.”

The answer, as Wainwright says, is likely that for most fish, switching simply isn’t worth it. At this point, being upright is hardwired. Simply put, fish “may not like to be upside down,” Flammang says.

In other words, they’re used to it, and it works. Like watching starships race across the galaxy, right side up.