The partially submerged pagoda in the background was once surrounded by mangrove forest. Mangrove destruction and increased infrastructure have altered the landscape of Myanmar’s Ayeyarwady Delta. Photo by Taylor Weidman

Shorelines are meant to move. With the rhythm of the ocean, the beat of storms, and the pulse of river sediment streaming into the sea, the intertidal zone grows and shrinks and repositions itself like a dancer responding to music. But chop off her stage and suddenly that dancer can’t groove the way she’s meant to.

Permanent barriers along the shore—sea walls, dikes, buildings, paved roads, and the like—prevent the intertidal ecosystem from responding to rising sea levels and storms by migrating inland. As a result, the intertidal zone erodes and coastal habitats compress. Flood risk rises and groundwater becomes contaminated with salt water. Some scientists call this phenomenon “coastal squeeze.”

Coastal squeeze has been well documented in Vietnam’s Mekong Delta, and researchers are studying its impacts in places like Veracruz, Mexico; the Caribbean island of Martinique; and the Sunshine Coast of Australia. The vast Ayeyarwady (or Irrawaddy) Delta of Myanmar (Burma) is another region that experts believe is vulnerable. Much less developed than the Mekong Delta, the Ayeyarwady Delta is “the rice bowl of Myanmar,” with as many as 60 percent of the 6.2 million inhabitants involved in agriculture. The locals have built an extensive system of dike walls and dams to keep the sea out of their paddies. At the same time, they have rapidly harvested the mangrove trees that would have otherwise helped shield them from cyclones and limited the erosion. Only a fraction of the region’s original mangrove-forest cover remains intact. 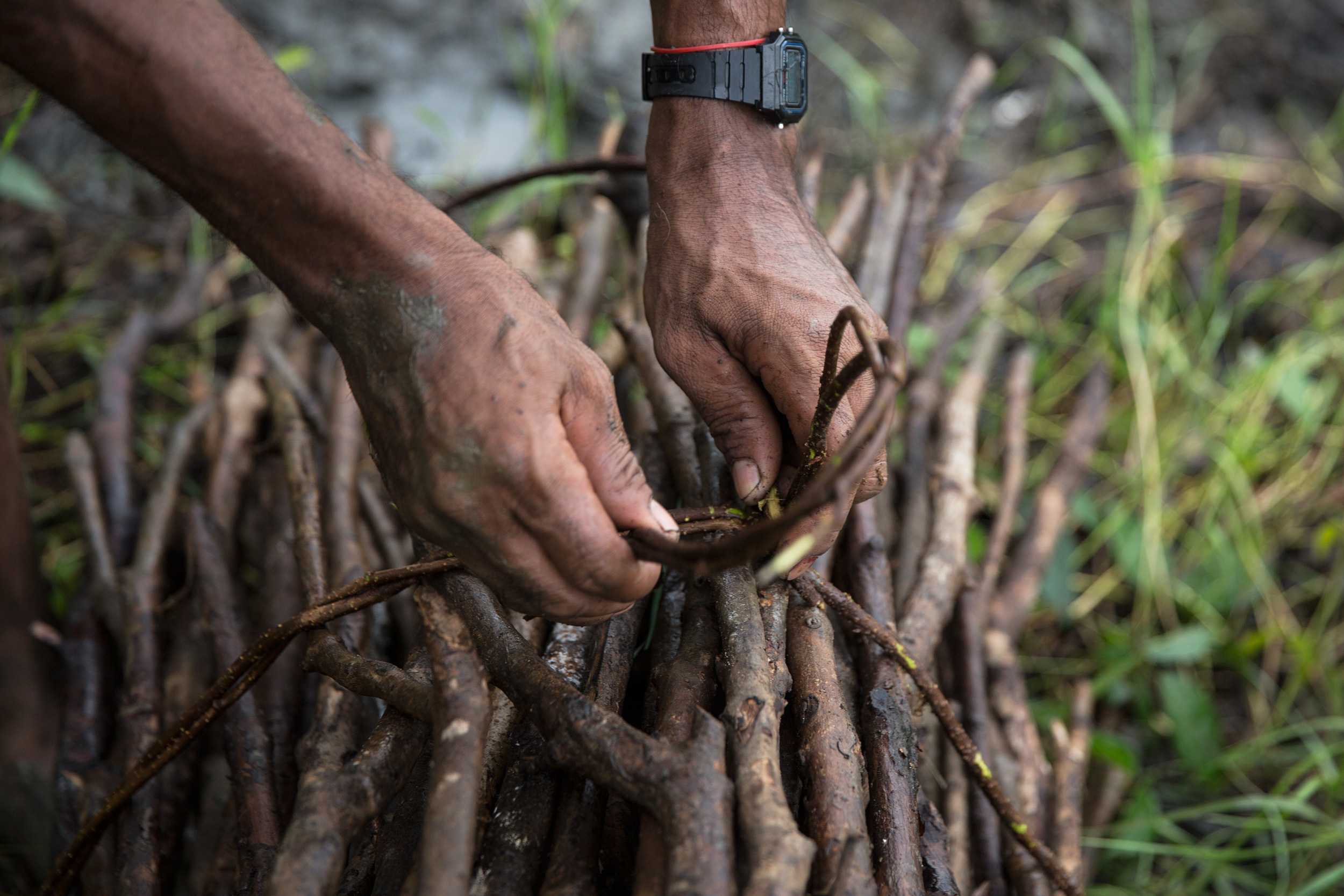 After clearing an area of mangrove forest near Wagon village, a Burmese man ties a bundle of branches together for transportation. When intact, mangrove roots form a dense lattice that protects coastal ecosystems and limits the amount of sediment that flows downriver to the ocean. Photo by Taylor Weidman

Photojournalist Taylor Weidman, who is based in Southeast Asia, visited the area for Hakai Magazine to document the ways in which people are contributing to and suffering from the early signs of coastal squeeze. “The people I met frequently talked about the loss of coastal habitat, primarily in regards to how it affected their lives and livelihoods,” he says. “The coastal environment is inextricably linked to their well-being.” Two of the communities he visited had been forced to relocate due to coastal erosion and storms. At the village Pyapon, Weidman met a man named U Soe. He pointed to four villages without mangrove cover, citing the numbers of deaths that occurred there when the severe cyclone called Nargis ripped through in 2008: roughly 100 in all. In comparison, his coastal village, Alegon, less than a kilometer away, still had mangroves to protect against the coastal surge. There was not a single death recorded there. 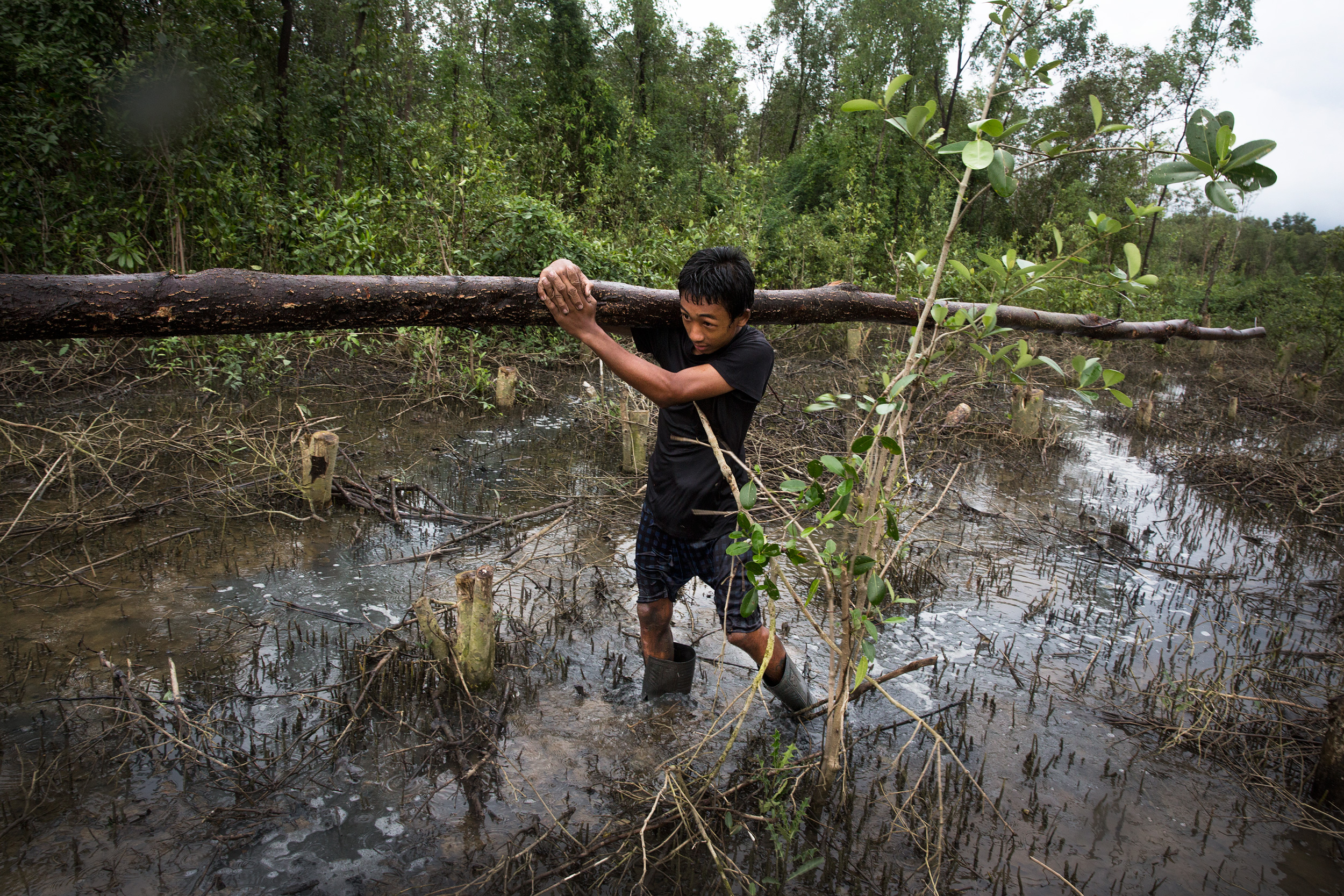 A young Burmese man carries a mangrove log out of a swamp near Wagon village. This mangrove forest, five and a half times the size of New York’s Ellis Island, is privately owned, and the owner capitalizes on the forest by clearing different areas each year, selling the wood for fires. By some estimates, less than 10 percent of the mangrove cover the Ayeyarwady Delta had in 1924 still exists today. Photo by Taylor Weidman

Weidman traveled the eastern region of the delta by ferry, taxi, riverboat, motorbike, and foot. “Rickety bamboo bridges, torrential rain, clouds of mosquitos, and knee-deep mud” slowed him down at times, as did the government informants who trailed him to monitor his activities. “There was a particularly memorable day when a convoy of activists, local leaders, and government minders escorted me to photograph the coast south of Pyapon,” Weidman says. “There were no roads, so we drove along the beach or small dirt trails, often having to wait uncomfortably together for the tide so that we could cross streams or take certain pictures.” 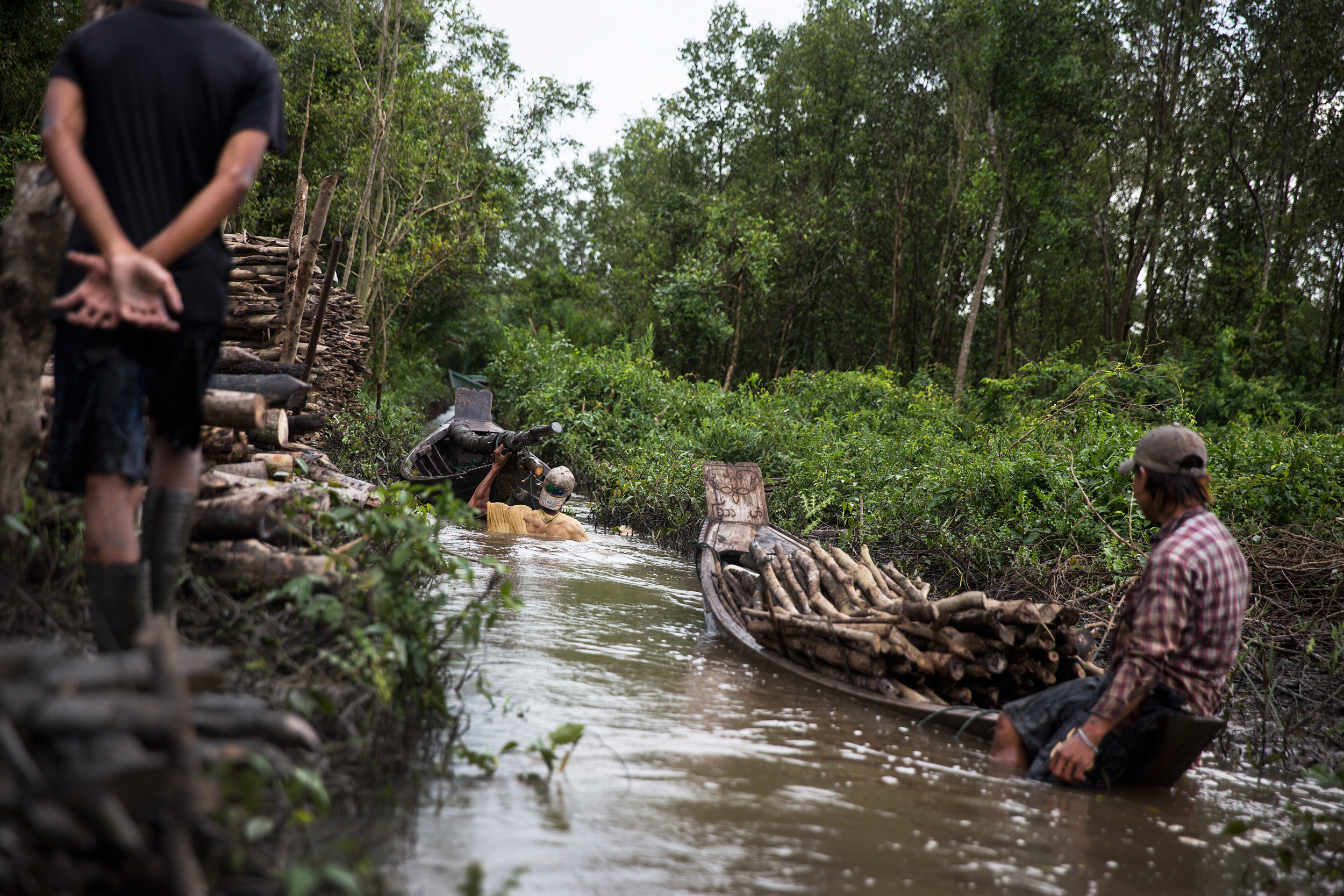 A group of Burmese men transport mangrove wood out of a forest in small canoes. Along with erosion protection, mangrove forests shield areas from severe weather events like cyclones. During Cyclone Nargis in 2008, villages where mangrove forests had been cut suffered worse damage than those with intact forests. Photo by Taylor Weidman

Scientists interested in the Ayeyarwady Delta face a number of challenges—most importantly, the lack of baseline data. In 2014, Dutch hydraulic engineers Merel Kroon and Jolien Rip—both master’s students at the time—attempted to assess changes to land use in the delta and related shifts in the coastline, and to develop an early warning system for coastal squeeze by studying Landsat imagery. In the end, their efforts were thwarted: the historical images were poor quality and important data on various aspects of the region were missing, which prevented them from drawing distinct conclusions. But they did note a general trend of mangroves falling to rice paddies and some paddies in turn transforming into fishponds. In recent years, Kroon and Rip say, villages have expanded, with more permanent structures replacing traditional bamboo dwellings. And the government is building roads and bridges. All potential contributors to coastal squeeze. Kroon and Rip shared their techniques for analyzing Landsat images and measuring salinity with local engineers in the hopes that they will continue monitoring the movements of the Ayeyarwady Delta. 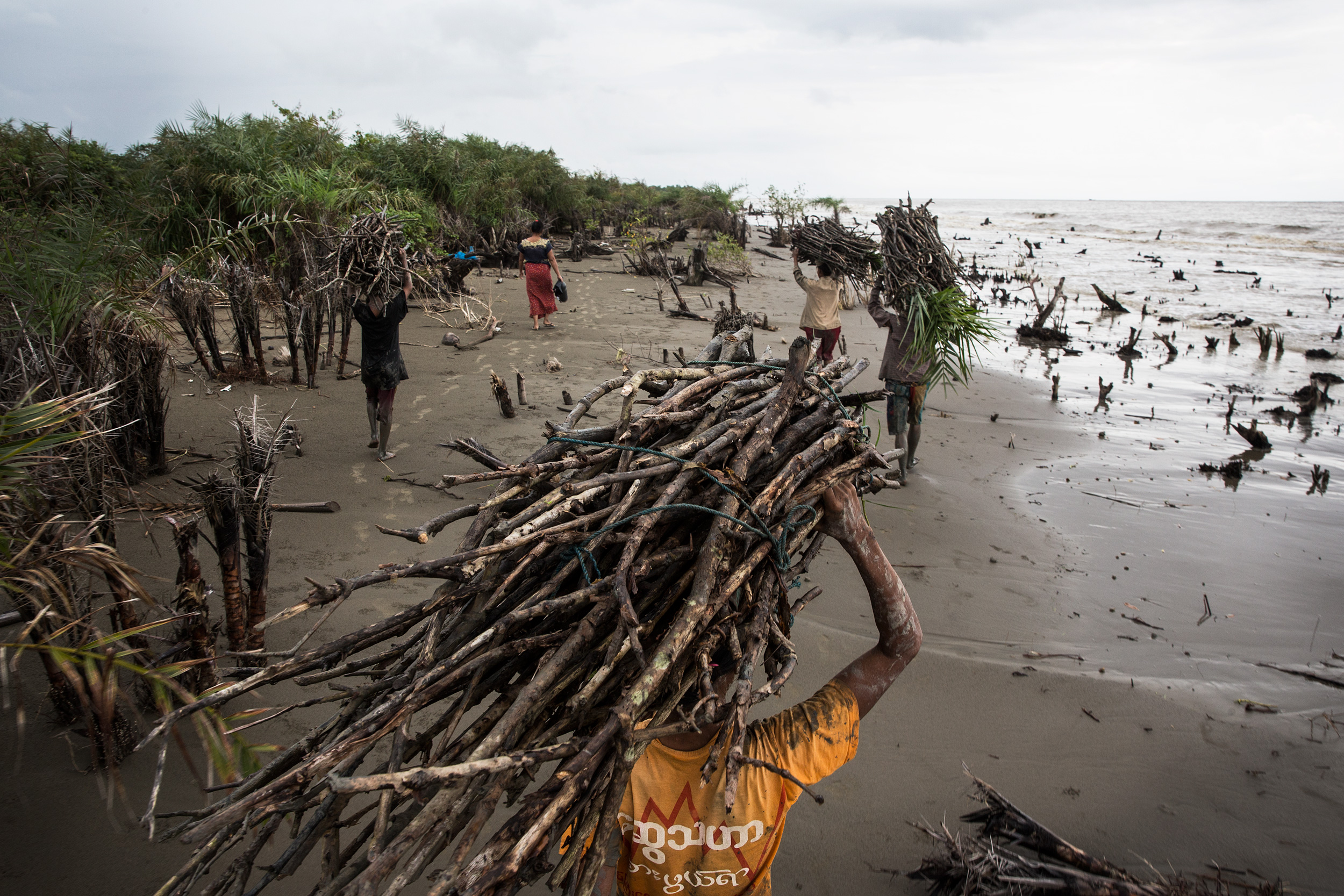 Locals from Ashaepyar village carry mangrove branches across a beach already denuded of trees. Although their community was relocated six years ago due to coastal erosion, they continue to gather mangroves from various forests for firewood. Photo by Taylor Weidman 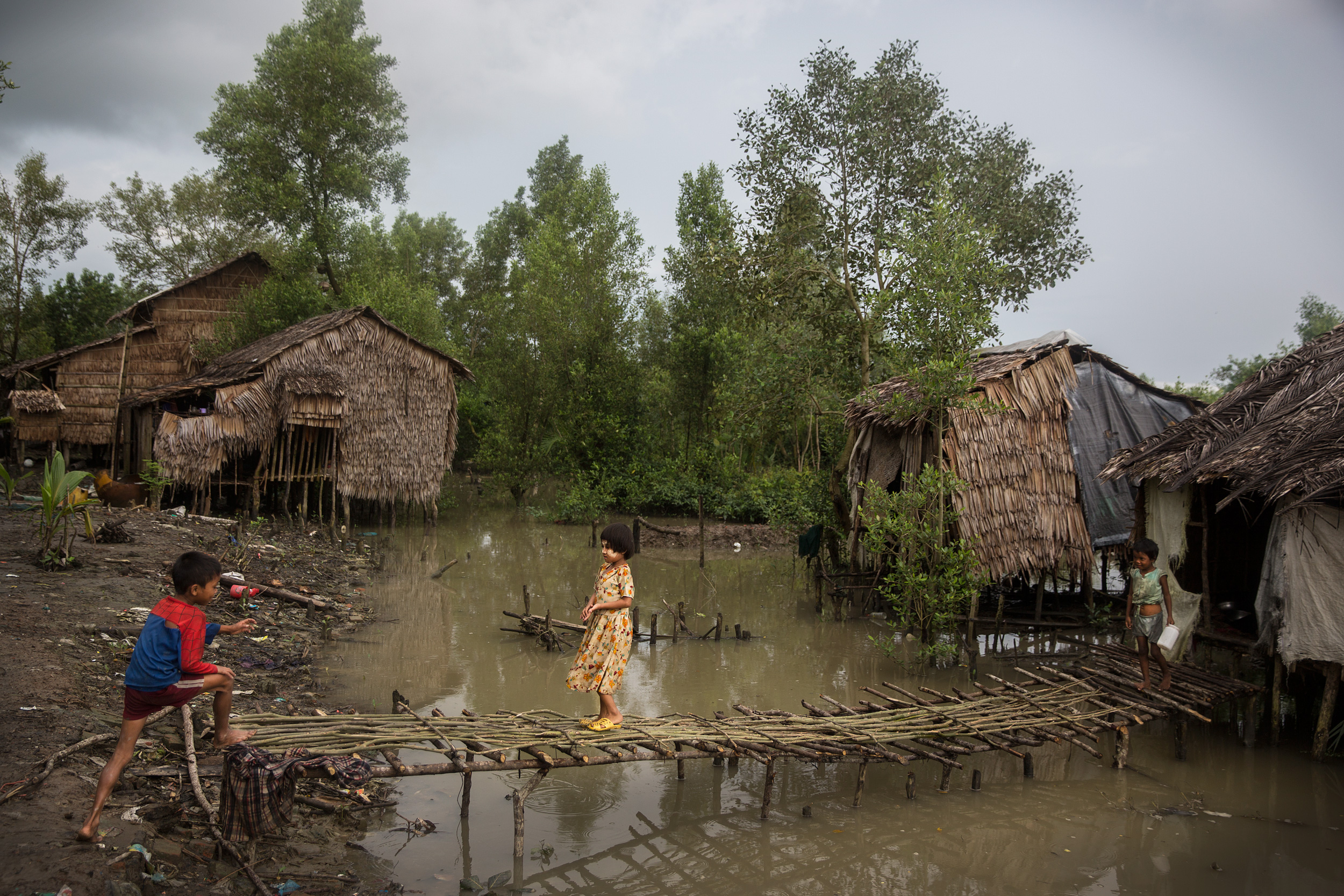 Children play on a wooden walkway in Ashaepyar village. The fishing village of 1,500 homes had to be relocated six years ago due to coastal erosion, and many of the structures, including a concrete school and clinic, were abandoned. Photo by Taylor Weidman 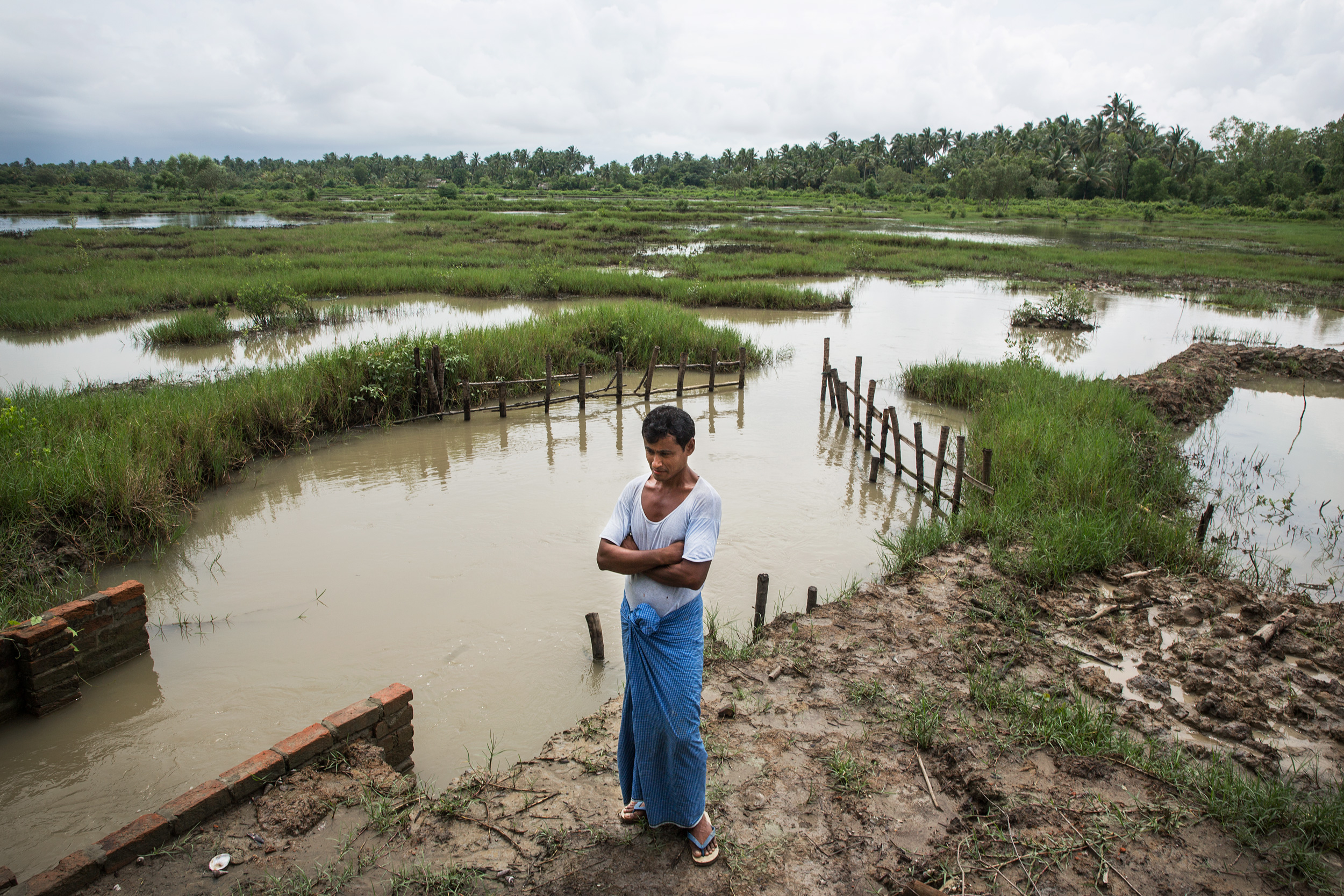 Ko Kyaw Kyaw, a shrimp farmer, stands in front of his 14-hectare pond in U Pe village. The permanent barriers associated with fishponds and rice paddies contribute to coastal squeeze. Photo by Taylor Weidman 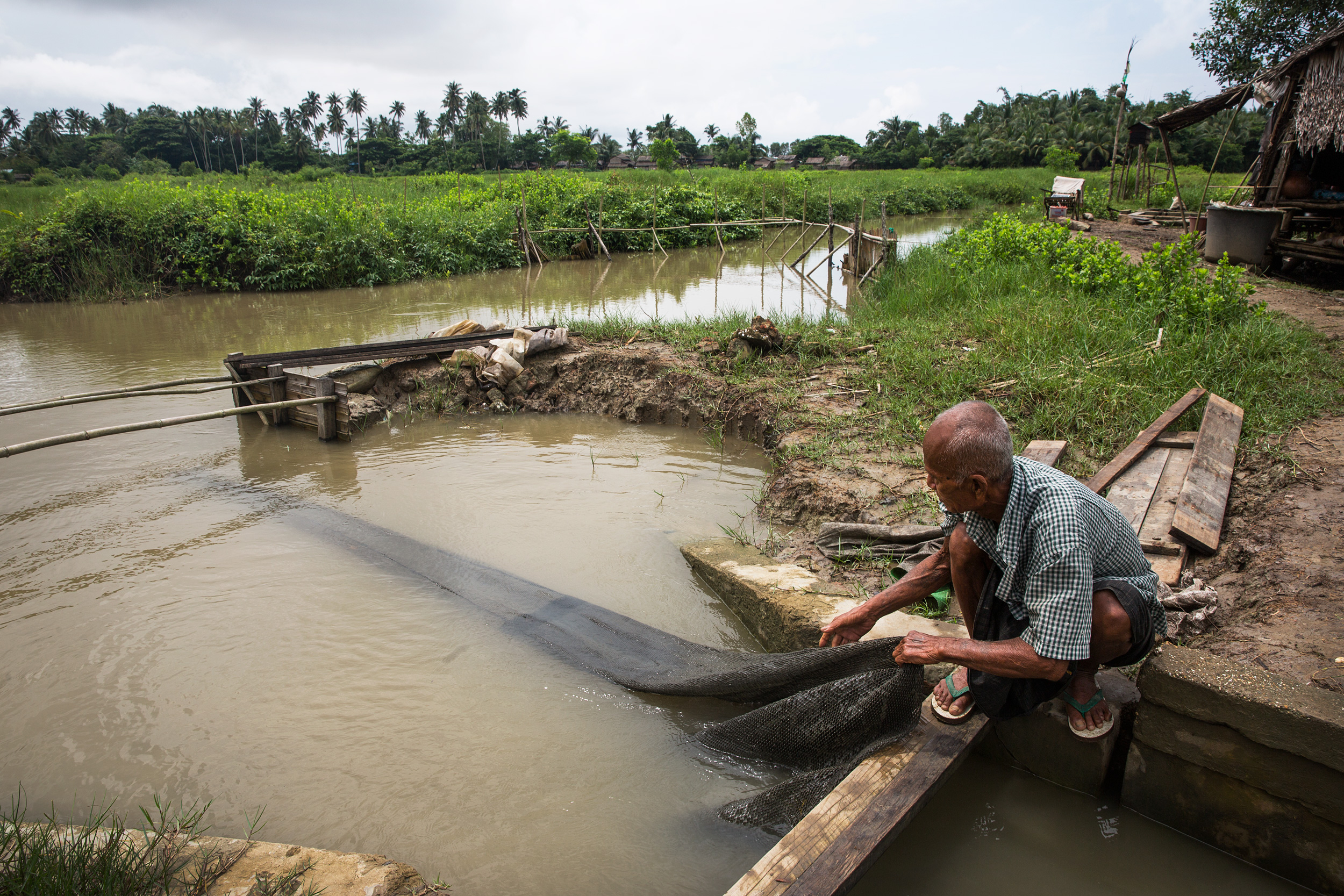 Ko Ha Win, a worker at a shrimp farm in U Pe village, tends to a pond. In many places in the Ayeyarwady Delta, fishponds have replaced rice paddies and swaths of mangrove forest. Photo by Taylor Weidman 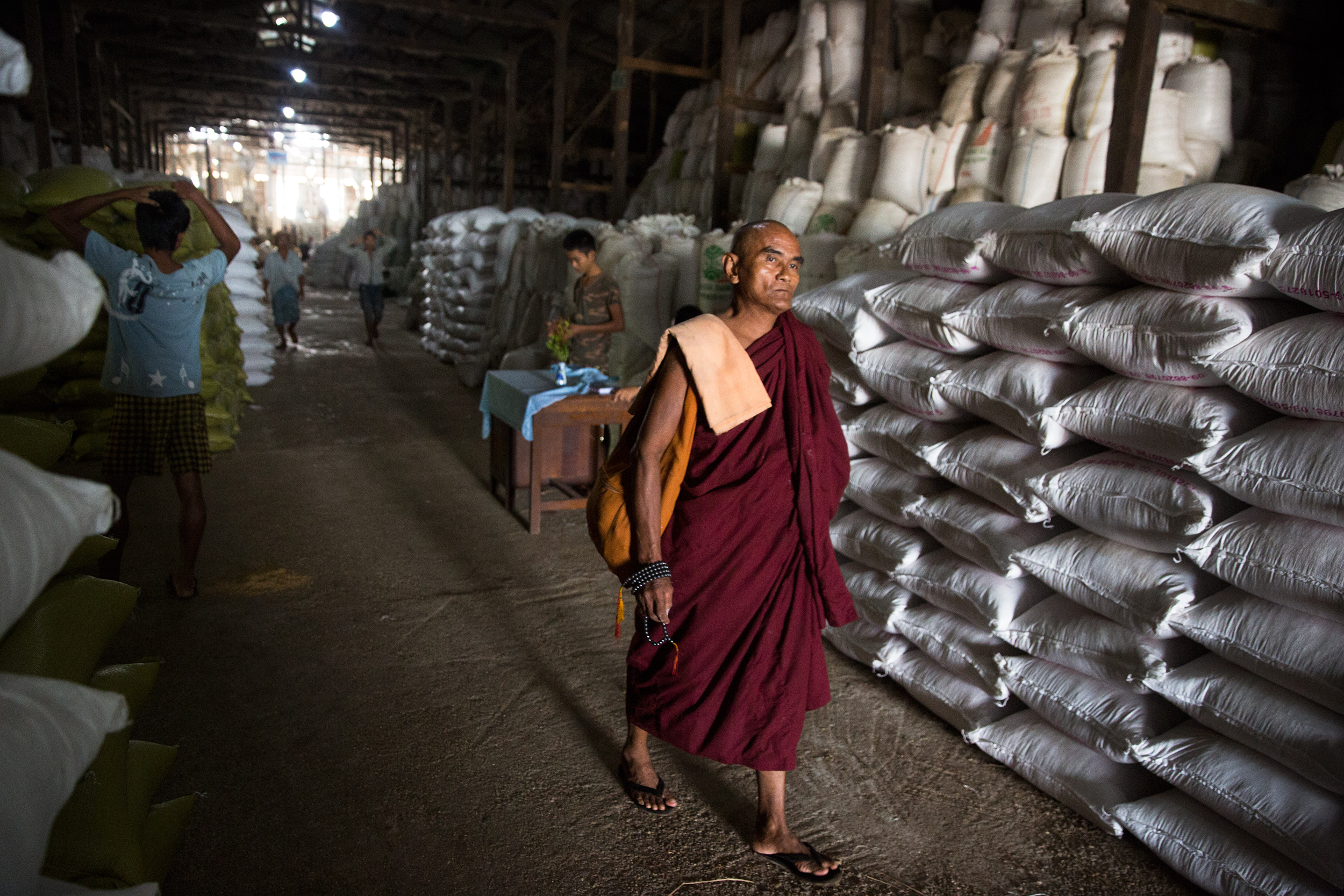 A monk walks through the largest rice mill in Bogale, one of the Ayeyarwady Delta’s largest towns. Rice from the lower delta is brought in by boat for processing here and then shipped by barge to the city of Yangon, roughly 150 kilometers along the river to the northeast. Photo by Taylor Weidman 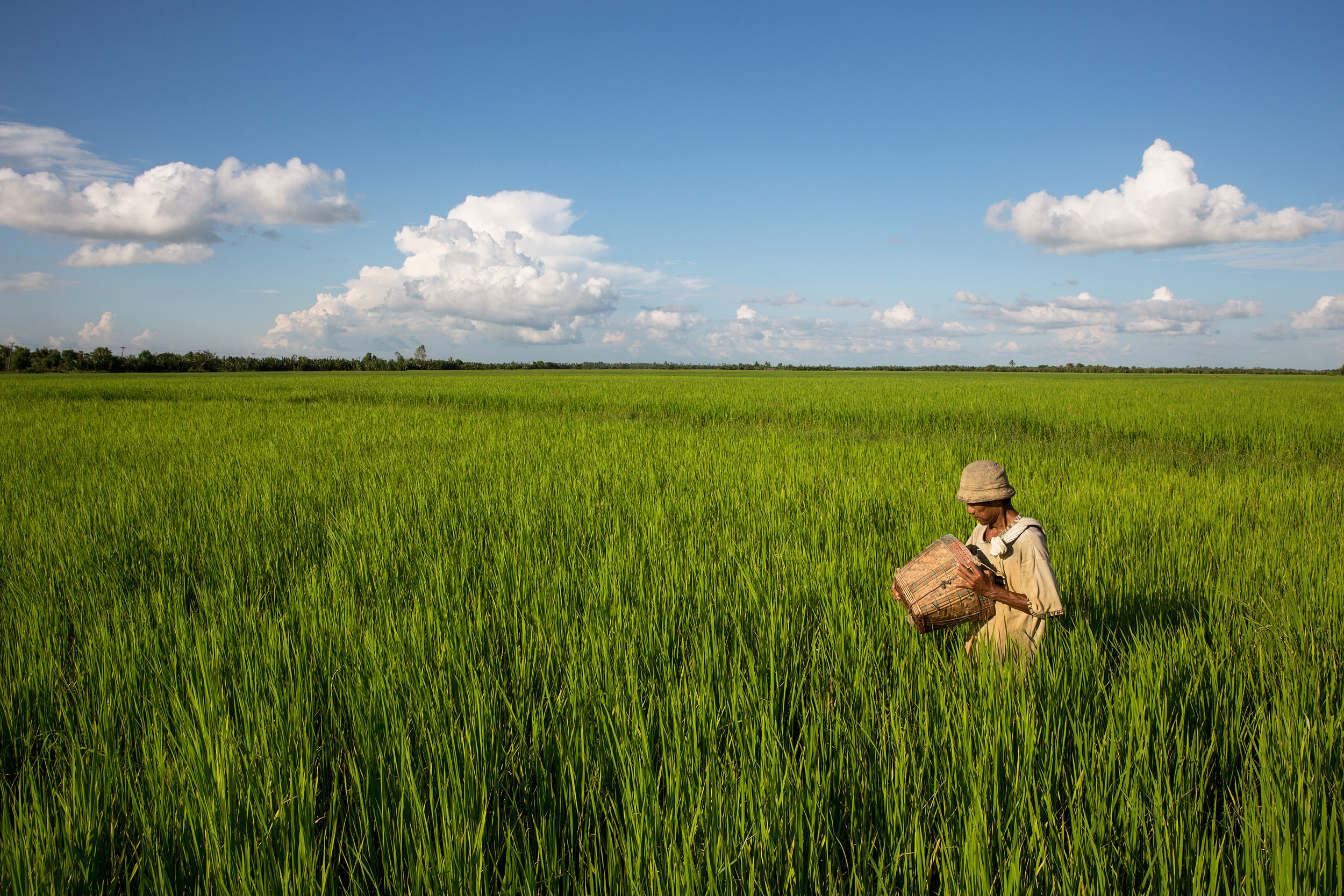 A rice farmer throws fertilizer pellets into his rice paddies in Aungtha village. The Ayeyarwady Delta is referred to as “the rice bowl of Myanmar.” Rice production escalated in the mid-19th century—at one point, Myanmar was the global leader. In the 1990s, the government, eager to intensify production, invested heavily in the construction of irrigation and drainage systems. Photo by Taylor Weidman 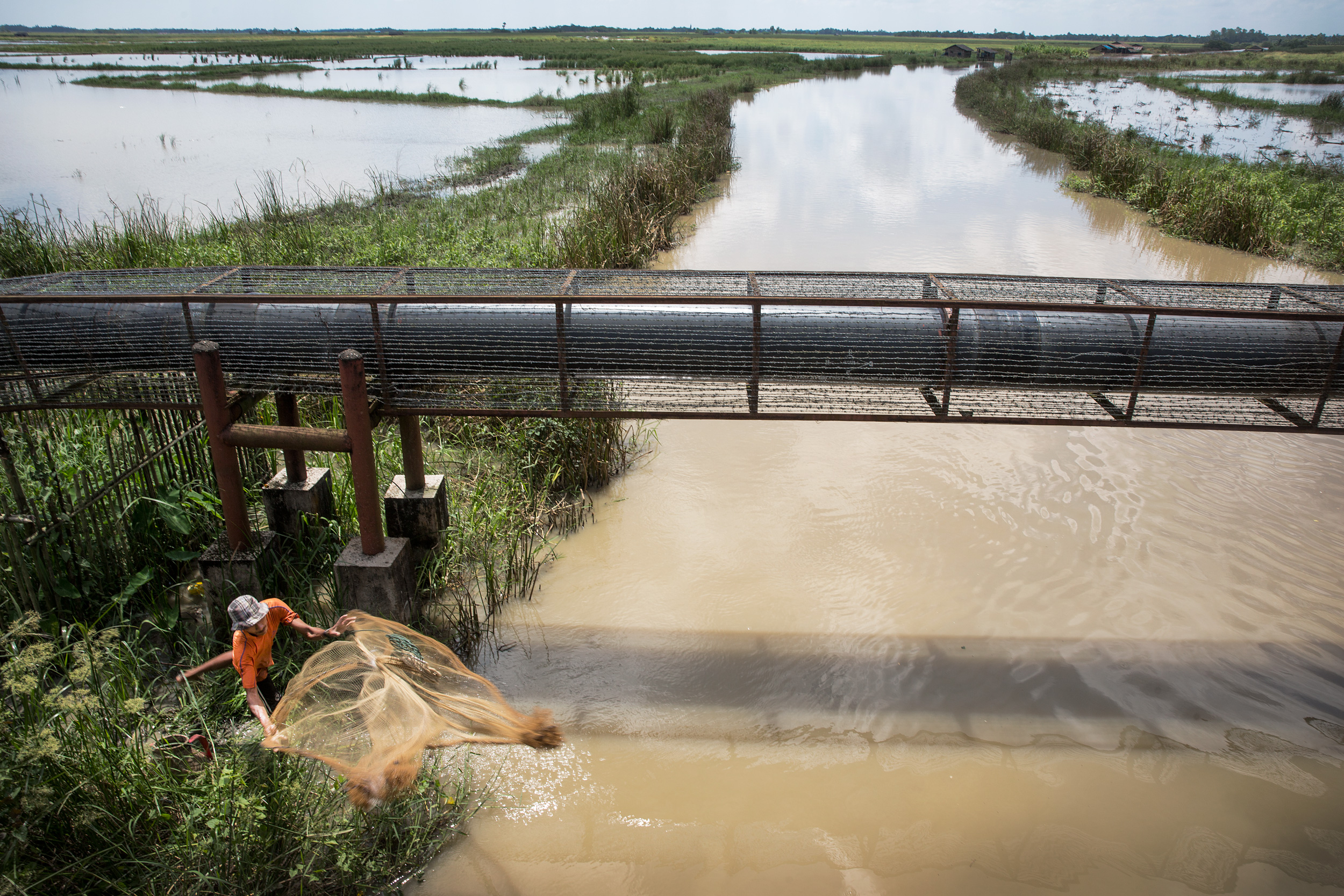 A Burmese man fishes with a net below a bridge and an elevated pipe near Gyogone village. Infrastructure projects are increasingly common throughout the Ayeyarwady Delta as the government tries to improve transportation and capitalize on the region’s resources. Photo by Taylor Weidman 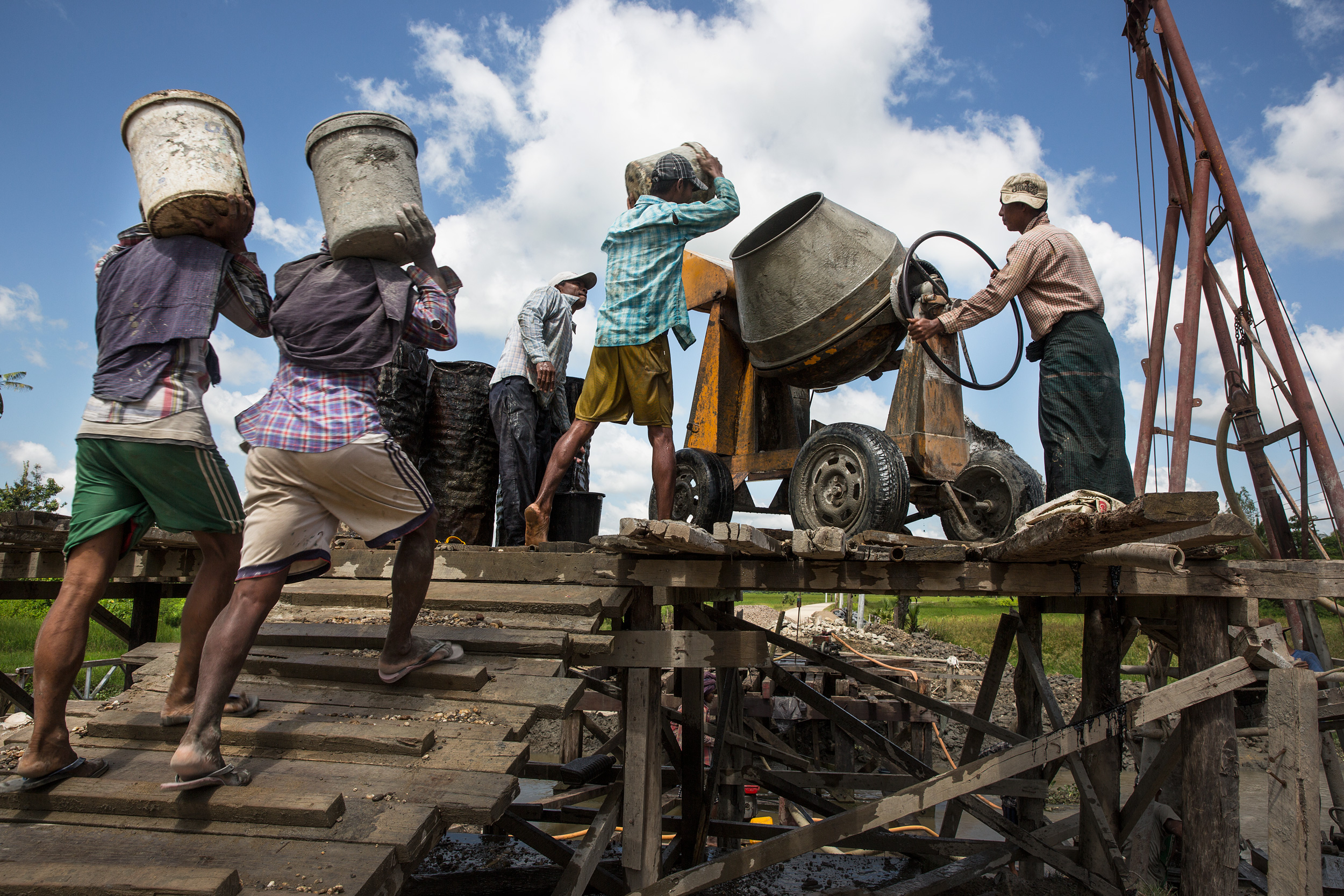 Construction workers build a small bridge in Tawgu village, one of dozens being built all over the Ayeyarwady Delta. The small bridges provide many coastal areas with year-round road access for the first time, but the new infrastructure can also contribute to erosion. Photo by Taylor Weidman 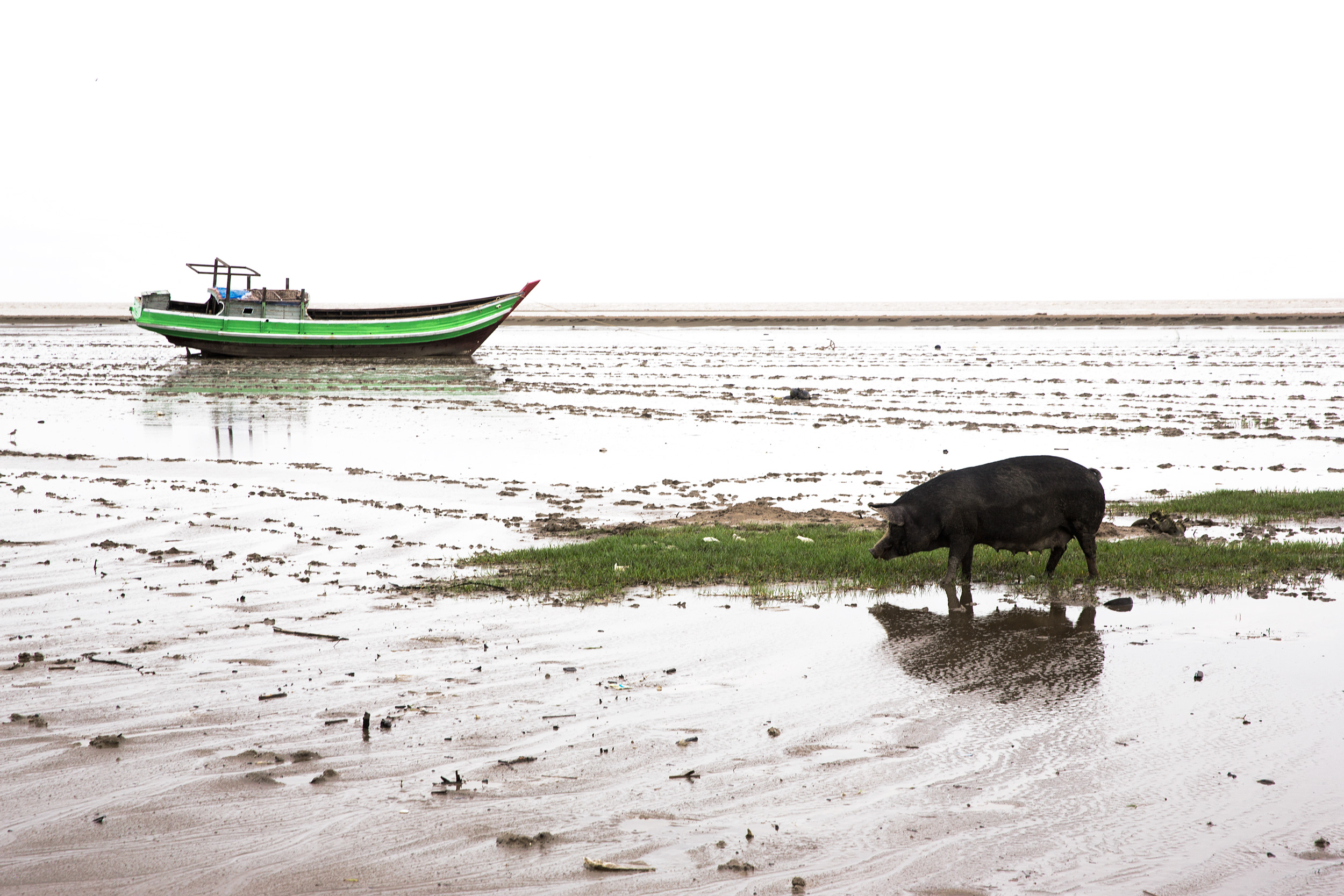 A domesticated pig forages for food during low tide near Alegon village on the coast of the Indian Ocean. As land erodes, many activities like animal husbandry are pushed closer to the coasts, introducing new variables into coastal ecosystems. Photo by Taylor Weidman 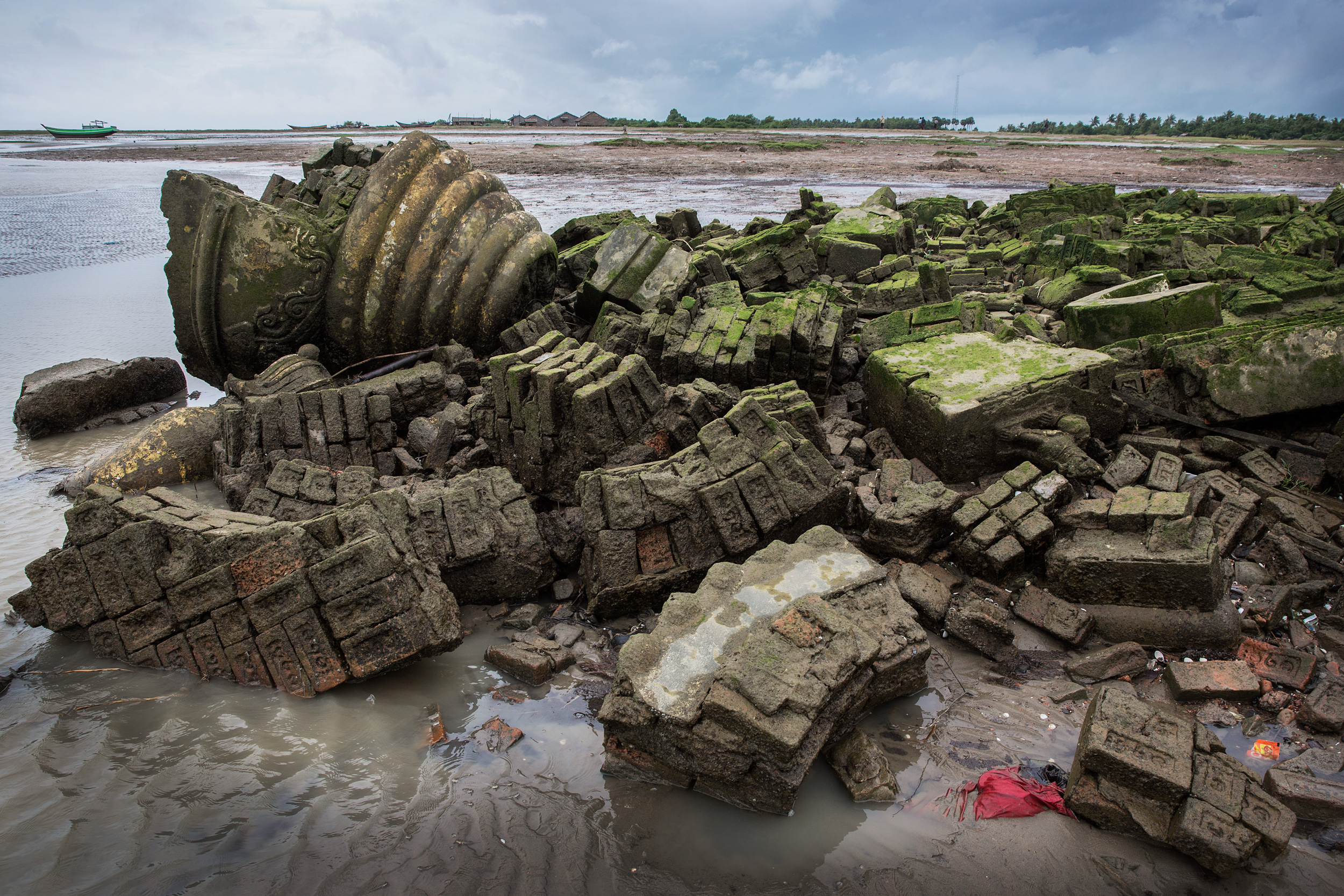 The ruins of a pagoda are revealed during low tide near Alegon village. The pagoda used to stand well inland but was overtaken by the sea four years ago. Photo by Taylor Weidman 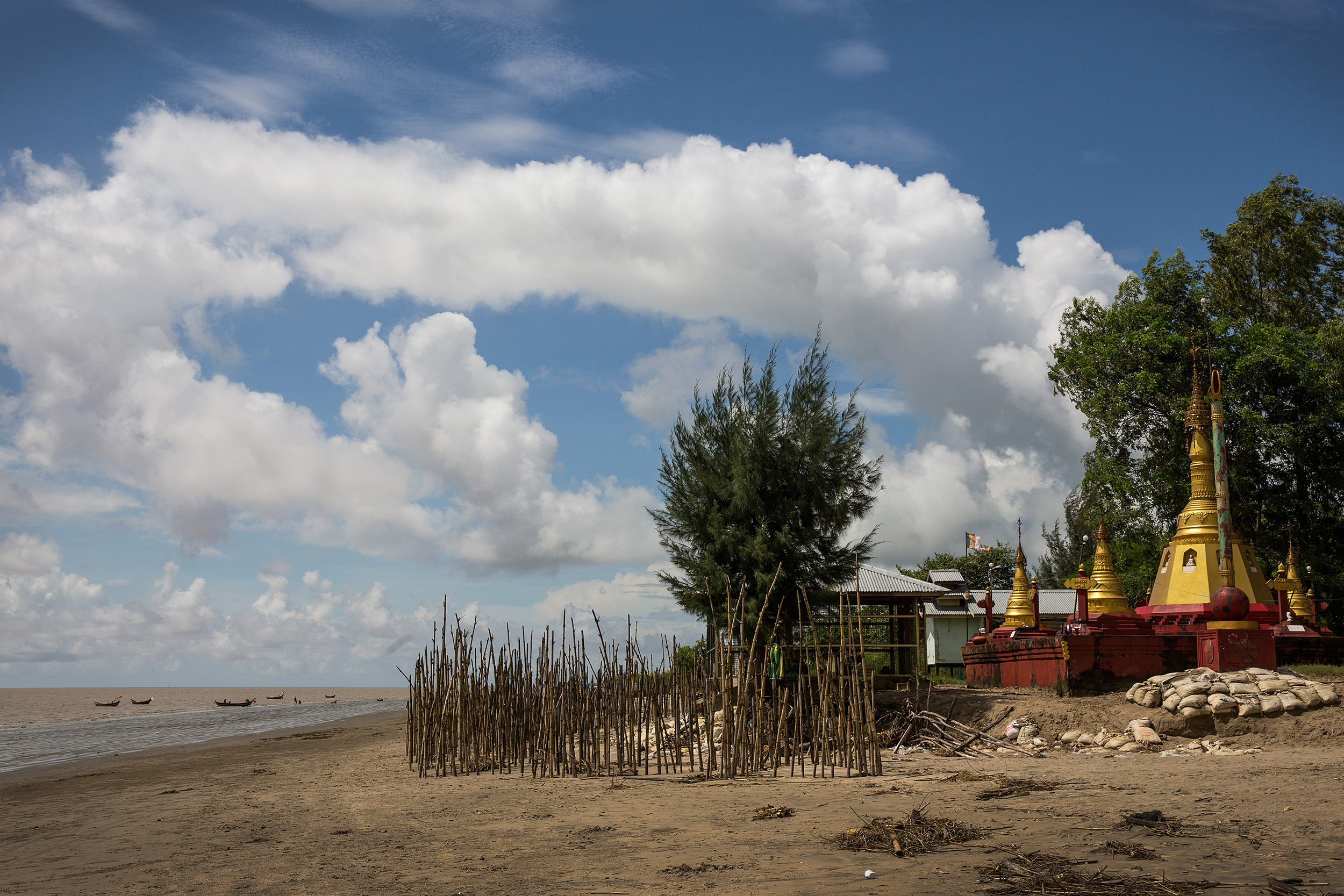 Villagers have planted bamboo stakes around a pagoda at the confluence of the Toe River and the Andaman Sea. The land around the pagoda has been eroding and villagers hope that the bamboo poles will protect it by trapping sediment. Photo by Taylor Weidman 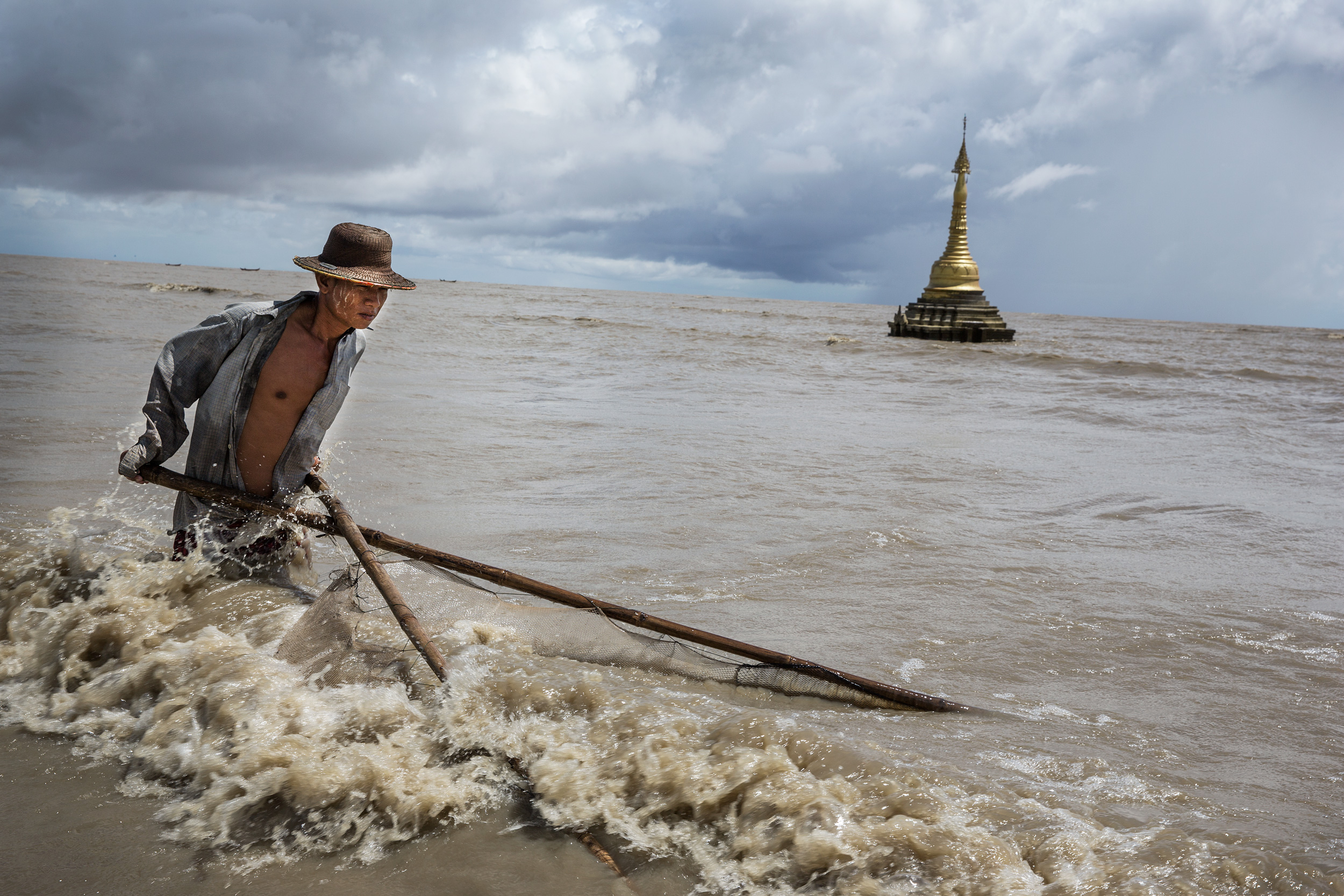 A Burmese fisherman catches fish using a net strung between two poles. The pagoda in the distance used to sit inside a mangrove forest, but locals razed it 15 years ago and the coast eroded, the soil washing into the sea. Photo by Taylor Weidman 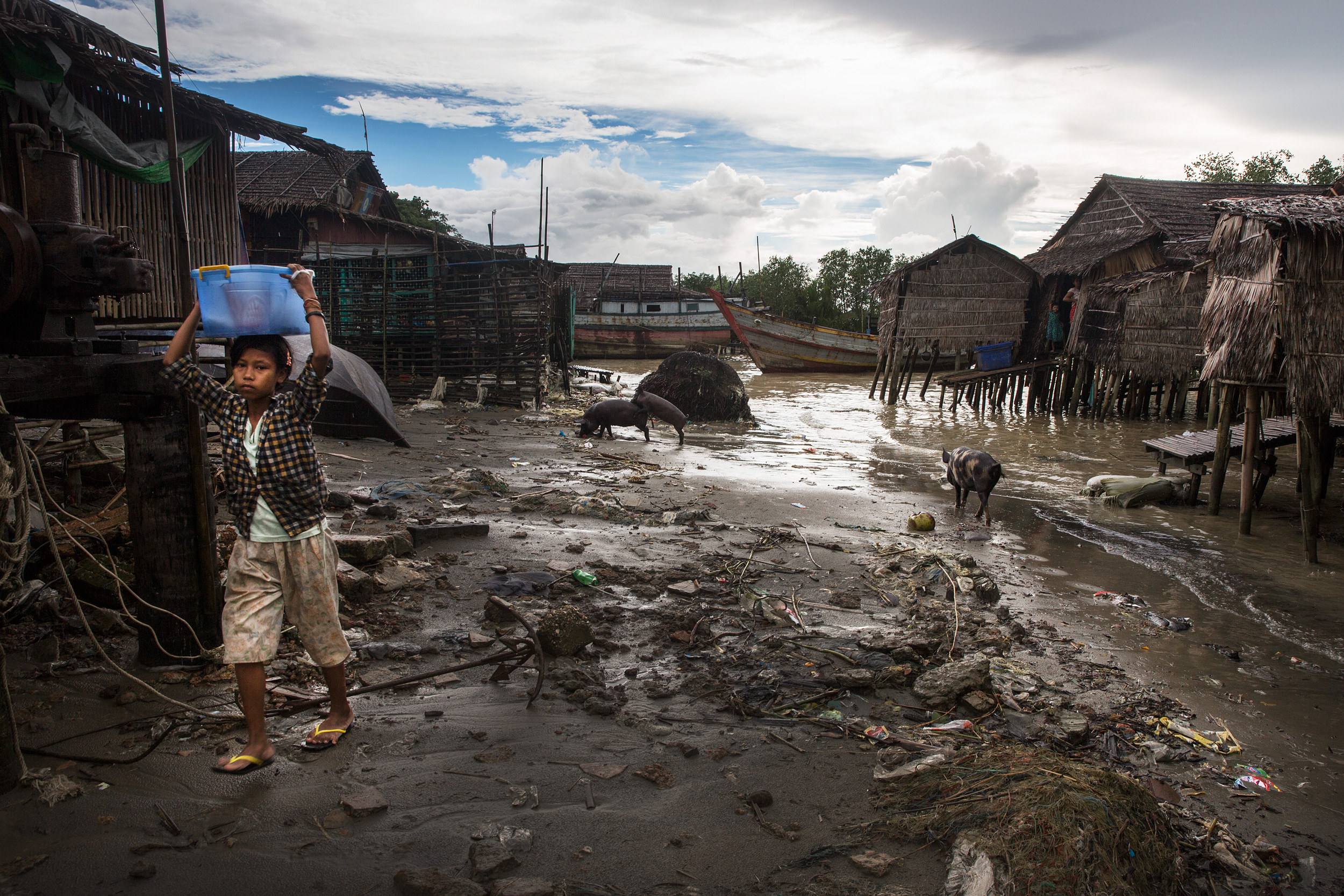 A girl walks near the polluted coastline of her village at the intersection of the Thandate River and the Andaman Sea. Thandate village is primarily used as a transportation hub, with coastal goods like fish, mangrove wood, and rice sold here before being transported upriver to the city of Yangon. Photo by Taylor Weidman 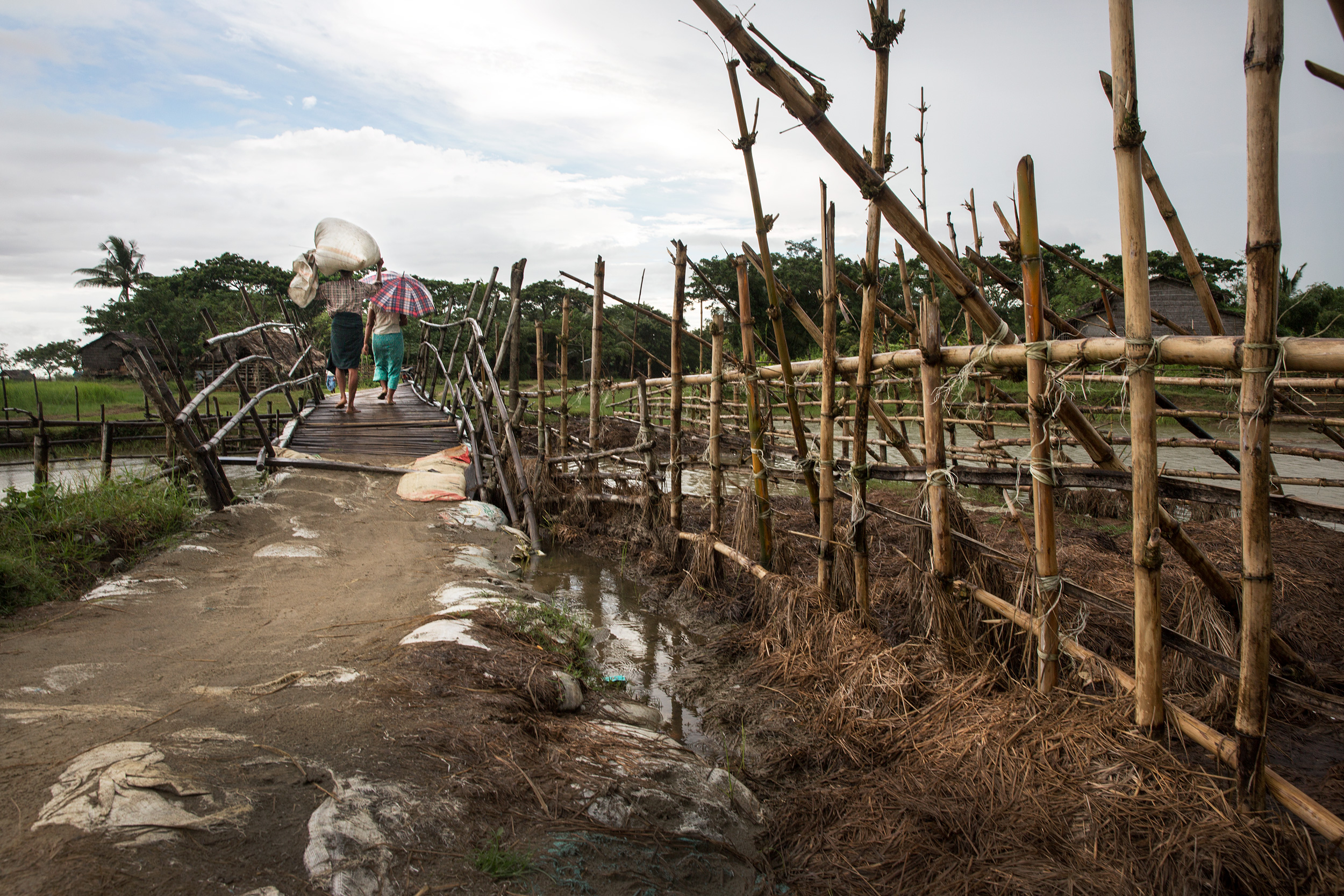 In Oakallan village, locals have built a sea wall out of bamboo, sandbags, and rice stalks. The sea wall is used to protect the inland fields from seawater at high tide. Salinity intrusion from salt water is a known problem throughout the delta. Photo by Taylor Weidman 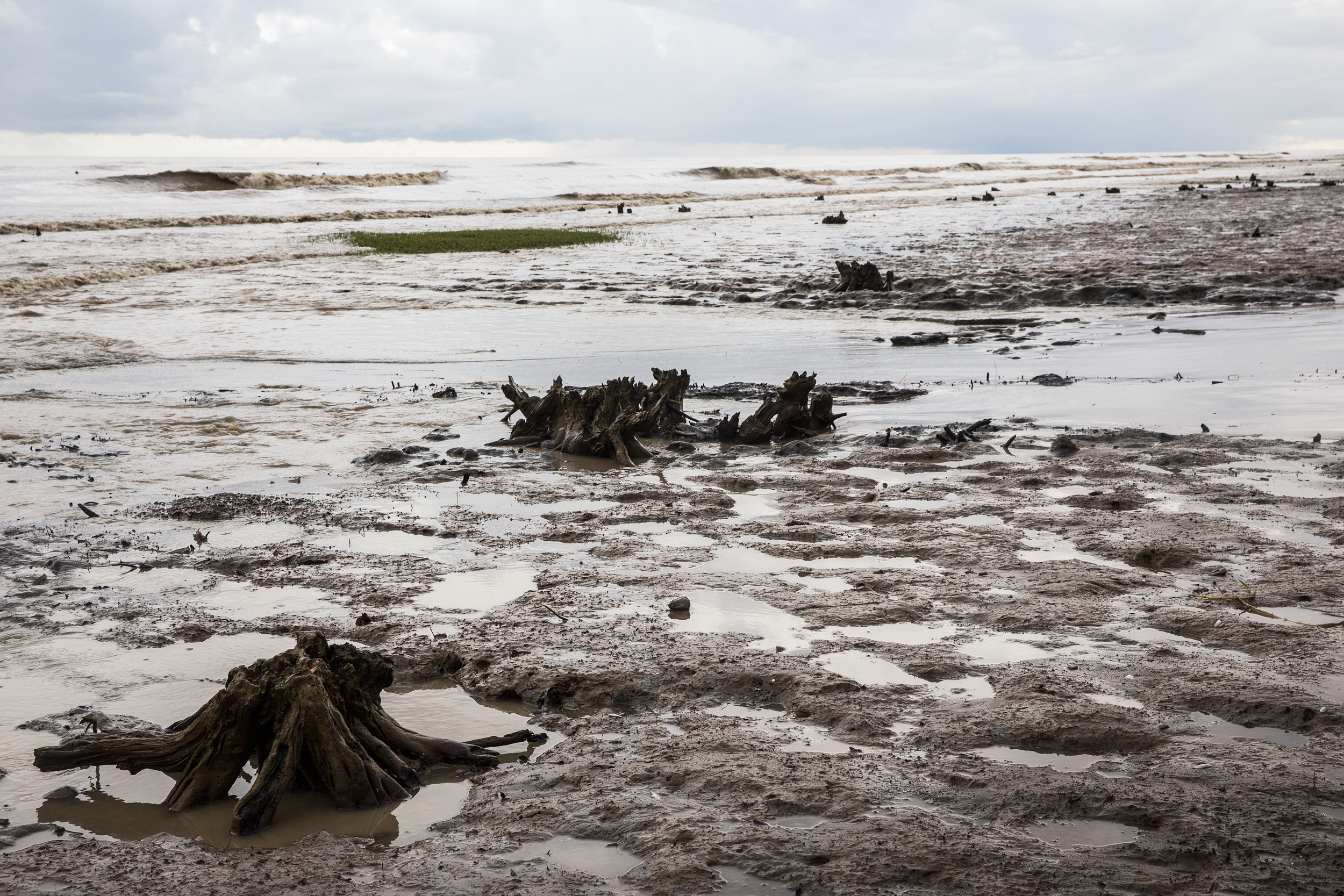 The stumps of felled mangrove trees are revealed at low tide at the intersection of the Thandate River and the Andaman Sea. The mangroves, which trap sediment and prevent coastal erosion, were cut down for firewood. Photo by Taylor Weidman 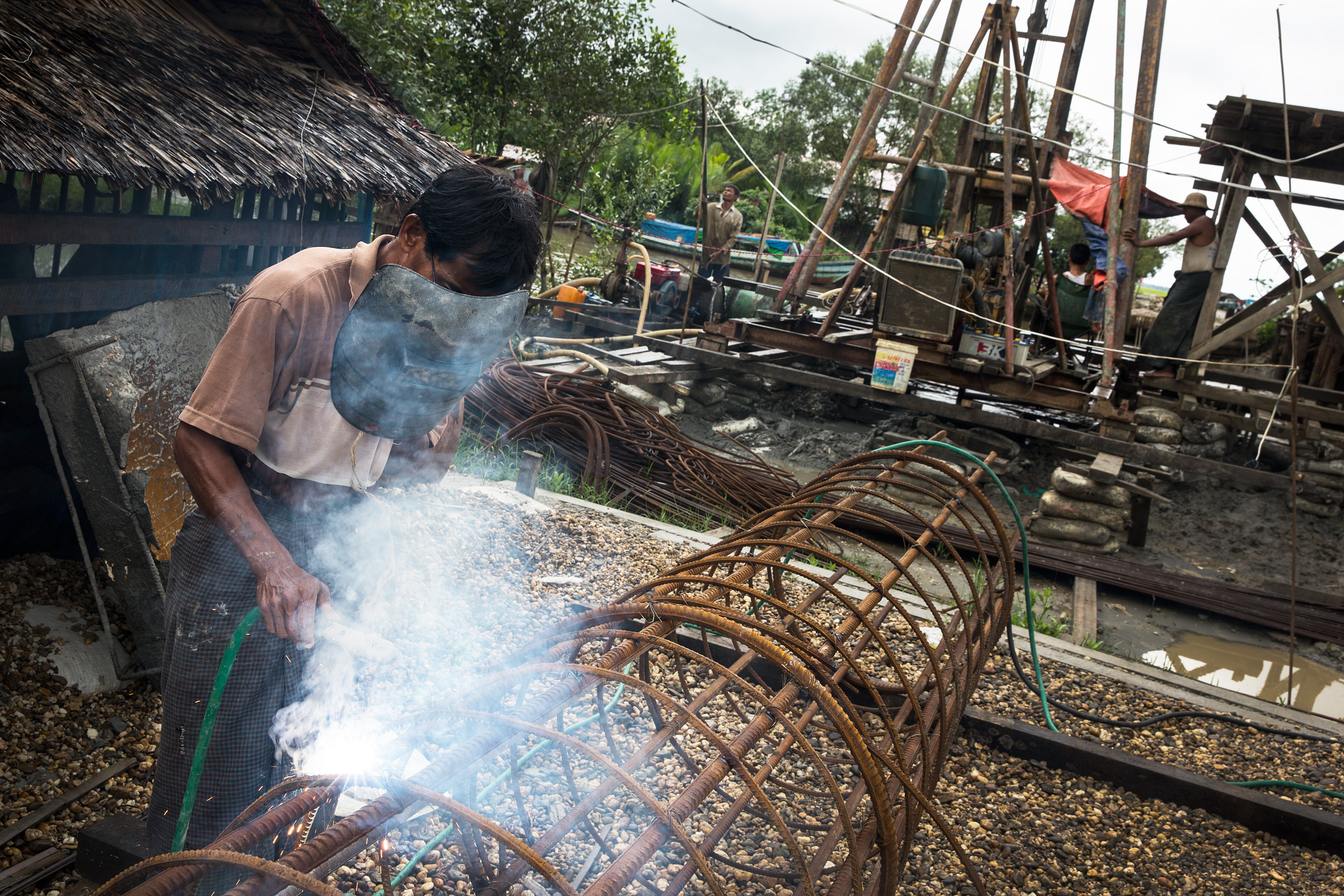 Burmese workers construct a concrete bridge over a small river near Myogone village. These bridges, along with dams, sluices, and other infrastructure projects, trap sediment upstream, preventing rich soil from reaching the lower delta and compounding the impacts of erosion. Photo by Taylor Weidman