With fish stocks depleted at home, Vezo fishers of southwestern Madagascar cast off for distant islands in pursuit of sharks, octopuses, finfish, and sea cucumbers. Photo by Garth Cripps

Every year, Gary Daniel packs his fishing gear and a few belongings into a small wooden sailing canoe and, with three other men from his family, sails a total of 600 kilometers up the coast and into open seas.

Daniel is a traditional fisherman—a member of the Vezo people of southwestern Madagascar whose lives are deeply connected to the sea. Vezo lead traditional lifestyles; they freedive for fish and lobster, glean octopuses from reefs, and catch sharks and other fish with lines or handmade nets. From his home village of Andavadoaka, Daniel sails to Nosy Barren, also known as the Barren Isles—a remote archipelago in the Mozambique Channel that lies 12 to 40 kilometers off the west coast of Madagascar.

“I keep certain stars in front of the helm, others behind me,” Daniel says. “I learnt the stars and winds from my father—we won’t get lost.”

Some of the first humans to arrive in Madagascar were migrants from Indonesia who sailed 8,000 kilometers across the Indian Ocean 2,000 to 3,000 years ago. Their seafaring skills live on in Vezo like Daniel.

His outrigger canoe, known as a pirogue, is traditional in design, and he navigates in much the same way his ancestors did. But the forces that push him to migrate are far newer.

Fish stocks are so overexploited in southwestern Madagascar that most Vezo can no longer catch enough to properly feed their families there.

The collapse has come about partly because external markets have driven overfishing. In the early 1990s, Vezo began intensively fishing sharks and sea cucumbers to meet soaring Chinese demand. The fishers also catch octopuses and squid for export to southern Europe; and sell fish to local middlemen for the inland city markets of Madagascar. 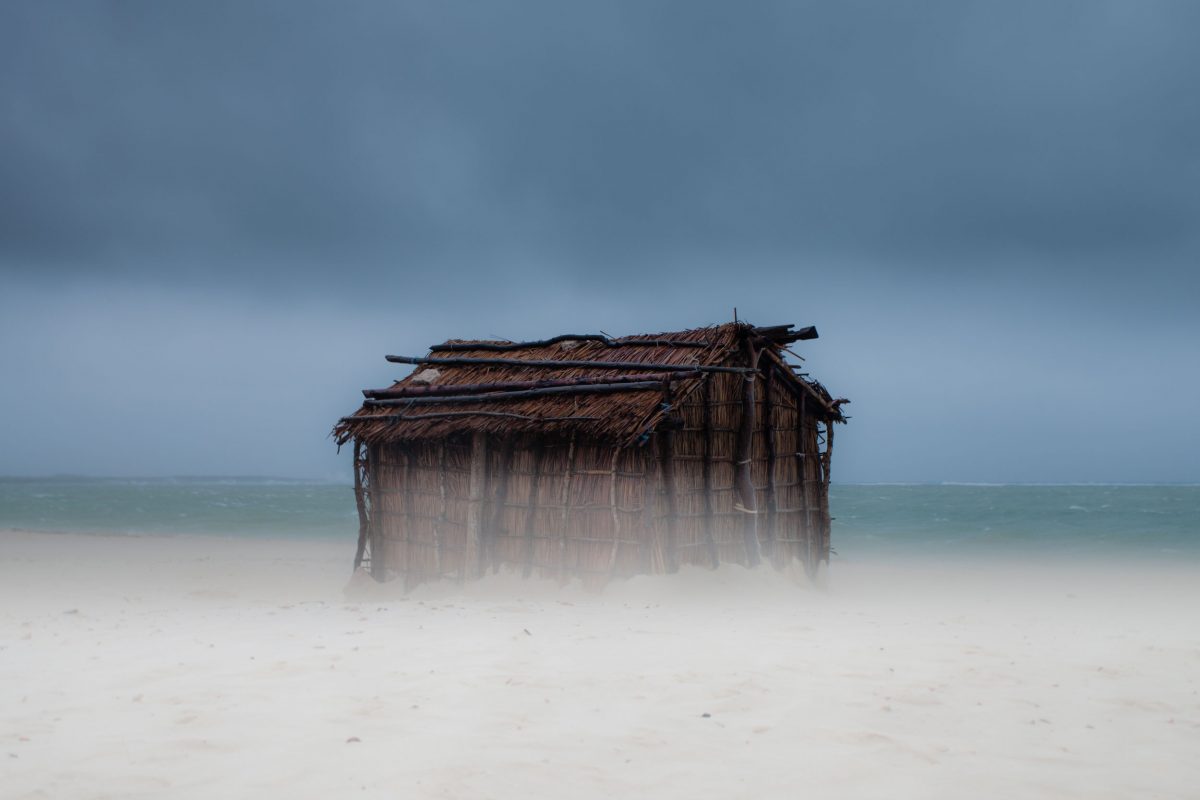 Strong winds buffet the house of a traditional fisher in southwestern Madagascar. The cyclone season is an especially difficult time for Vezo fishers: it’s when rice prices are highest and rough seas make fishing dangerous and unproductive.

While earning a living from fishing has become increasingly challenging, Vezo have few alternatives. Their homeland lies in an arid region where farming is difficult. Climate change is making it even harder, with rainfall becoming more erratic and droughts more severe. In the past, some Vezo supplemented their catches by growing maize and cassava; now they are completely reliant on fishing. And inland farmers beleaguered by chronic drought have begun moving to the coast, where they join the crowds foraging in the shallows for octopuses.

Small numbers of Vezo have always led a semi-nomadic life, chasing fish stocks and following the winds. But over the past decade, many more have taken to migrating much longer distances to the Barren Isles and other destinations along Madagascar’s west coast. No official estimate exists, but the number of people traveling far north may be in the low thousands. It’s the only way they know how to keep feeding their families and earning money. Only on those distant islands where few people go can they hope to find more productive fishing grounds.

They’re part of a global phenomenon. An increasing number of people—mostly subsistence farmers and fishers—are being forced from their homes by drought, cyclones, sea level rise, and collapsing natural ecosystems. In 2018, natural disasters displaced 17.2 million people, significantly more than the number of people who became refugees due to conflicts and wars.

Ocean warming and acidification will only further undermine the reef ecosystems and fish populations that coastal people depend on. 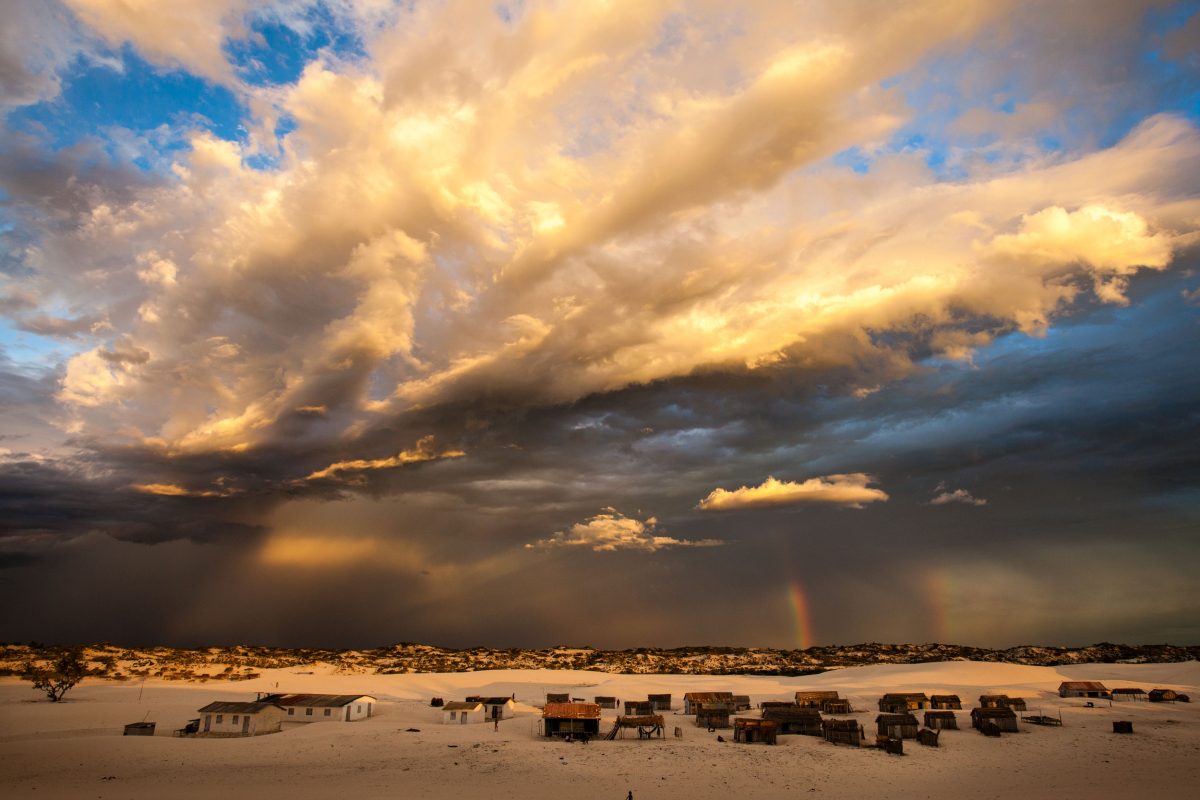 Daniel and others like him leave their homes as soon as the cyclone season ends. Some go in small teams of related men; others travel as family groups with their wives and children. They hope to return home nine months later, just before the cyclones begin again. But if fishing is not good, they will stay on the Barren Isles until the next year or the year after—as long as it takes to save enough money to sustain them. Many may never return.

While migration among the Vezo is rising, it is not an option for all families. Those who migrate are not the poorest from their communities, as they need an ocean-going pirogue and the money to cover the cost of food for the trip.

The days of migration have a familiar routine. Daniel and his family members rise in the night; within minutes they’ve dismantled their tent made from their sail and packed their few clothes, blankets, cooking pots, and fishing gear into their pirogue. In the dark, they sail west away from land. Their way is sometimes lit by the moon; on other nights there are only the stars and they can only hear, rather than see, the surf crashing on distant reefs and sandbars. In the southern half of the journey, migrants are alone on the water, but as they go farther north they often encounter industrial trawlers fishing at night. 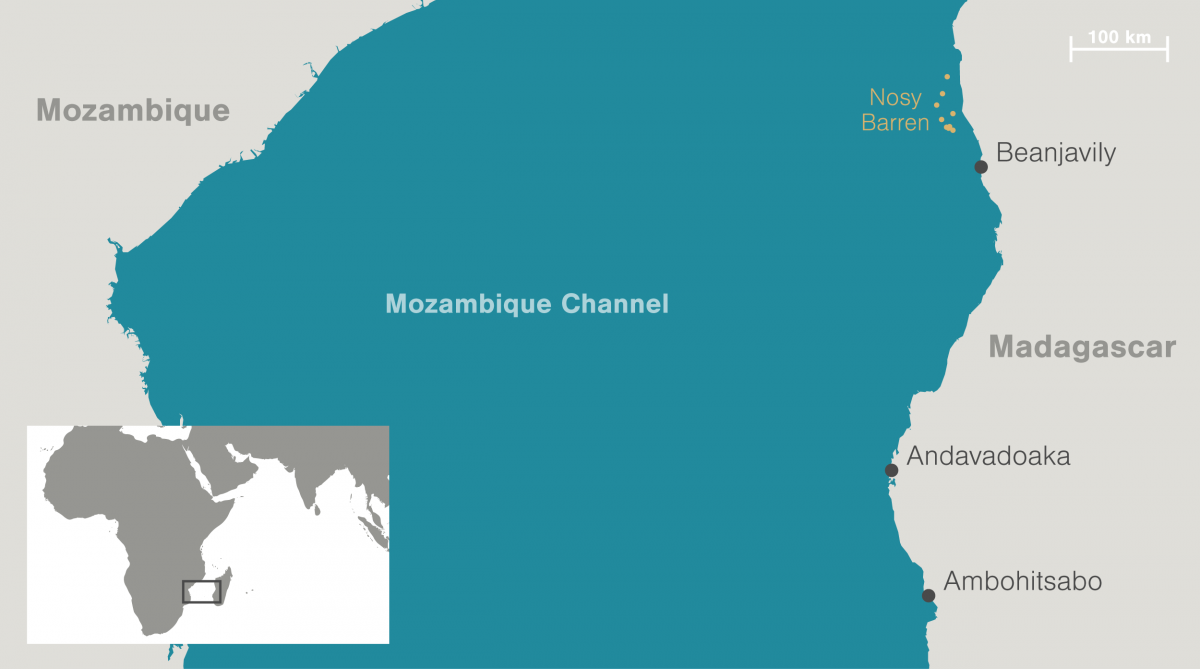 By dawn they are far offshore, sailing north, the pirogue swishing before the wind and riding the ocean swells. In the afternoon, if the southwesterly winds are not too strong and they are close to a safe landing place, they will sail east back to land. For the last two-thirds of the journey, it is too dangerous to make landfall because of bandits on the mainland, so the travelers sail through the night, cooking and sleeping in the boat’s slender wooden hull.

The Barren Isles are mostly small cays no more than a kilometer long where only hardy, salt-loving grasses and stunted palms grow. Before the migrant fishers came, many of the isles were solely frequented by seabirds and turtles that nest on lonely beaches.

The isles give no respite from the sun and the wind. Migrants must bring all they need to survive. They return to the mainland only to fetch drinking water, rice, salt, and firewood and to sell their catches. They’re safe from bandits on the islands; it’s the weather that worries them. One of the dangers they face is gales trapping them far offshore without enough water to drink. 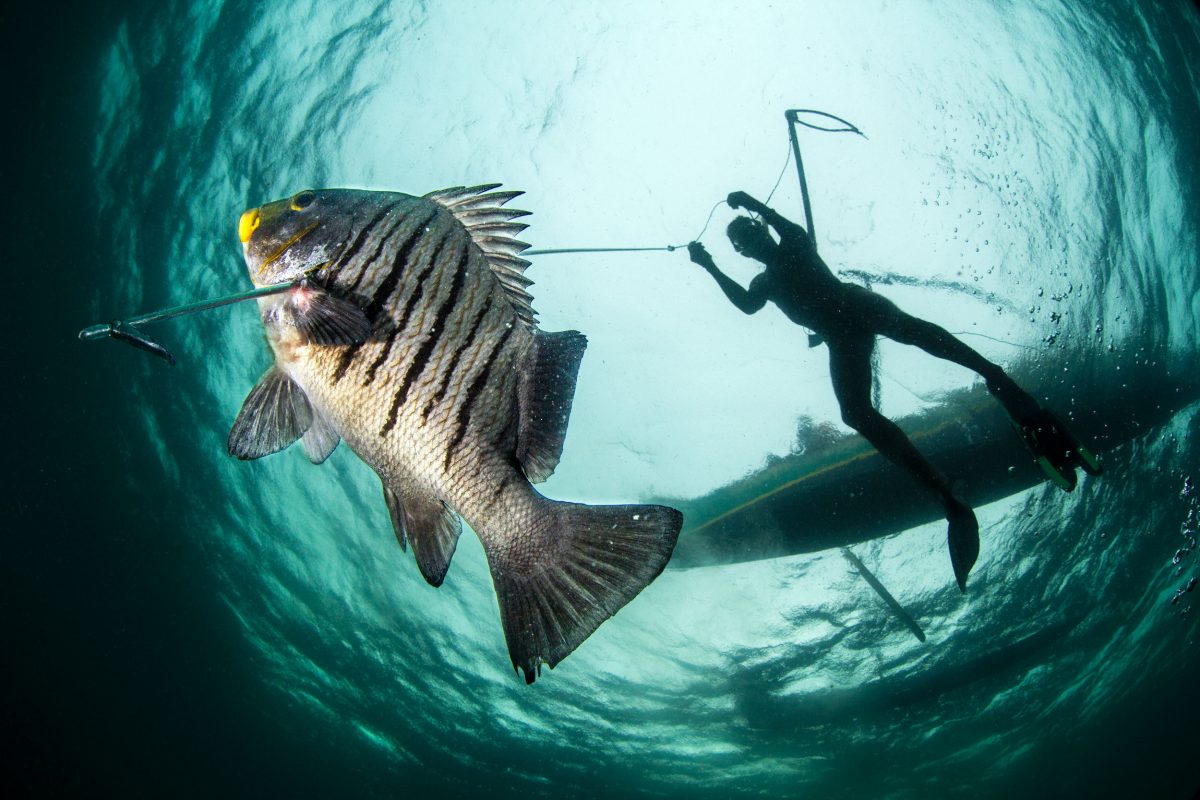 A man impales a fish with a homemade speargun near Andavadoaka in southwestern Madagascar. Vezo make their spearguns with wood, rubber cut from old tires, and rebar. For large nets, they use window screening or mosquito nets and nylon fishing line. The fish this man has caught is prized—the local name for it translates to “don’t share even with your grandmother.”

The fishers live in temporary shelters made from driftwood and grass or use sails and masts to make tents. On the sand cays, they construct stilted platforms of driftwood to keep belongings safe from the flooding sea. The remote makeshift communities must look after themselves. There are no hospitals or schools. Women and children spend their days foraging for octopuses on the shallow reef flats while the men are far offshore fishing. Fishers salt and dry everything they catch, preserving it until they visit the buyers in the mainland cities.

While the Barren Isles still yield better catches than the Vezo can find at home, stocks here are now faltering too. Shark and sea cucumber populations in particular have dropped in the last few years.

Vezo fishers freedive for sea cucumbers, which limits their harvest depth to about 30 meters, leaving anything in deeper water untouched. And they can only target the farthest offshore reefs when the winds are favorable. But paid scuba divers from the coastal cities of northwestern Madagascar operate on the same reefs and don’t face these limitations. They work off motherships—old converted industrial trawlers or 50-tonne wooden sailing ships that can accommodate 45 divers—and use motorized skiffs. With air tanks, they can exploit sea cucumbers as far down as 65 meters, and they operate year-round. Scuba diving for sea cucumbers is illegal in Madagascar, but lucrative. The country’s seas are vast and the government has little means to police them. 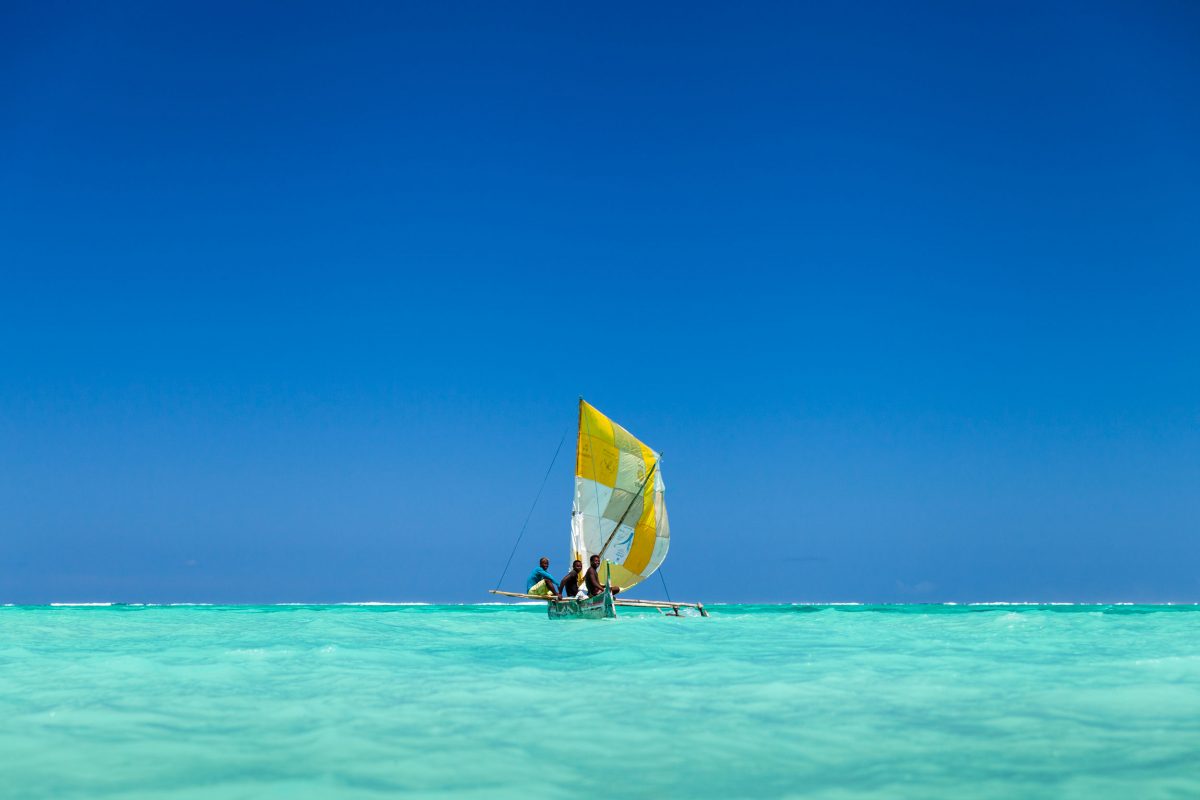 Traditional fishers sail an outrigger canoe to deeper water where they’ve set a shark net. The centuries have left Vezo sailing canoes largely unchanged; only the sail and rope stays are of modern materials.

Migrants first left their homes to find sharks and sea cucumbers. But as these have dwindled even in the most remote places, Vezo have also begun migrating just to catch finfish. Though finfish are worth far less, they provide a sure livelihood.

Blue Ventures, a marine conservation NGO, is working with the Vezo to create new jobs in aquaculture, rebuild octopus fisheries with temporary closures, and create community-managed marine protected areas. But in this modern context, where foreign seafood markets drive local overfishing, and industrial fishing and global climate change are irreversibly changing the marine environment, the seas on which Vezo have relied for millennia are being lost to them. Many will continue to turn to that timeless way of seeking a better life—migration. 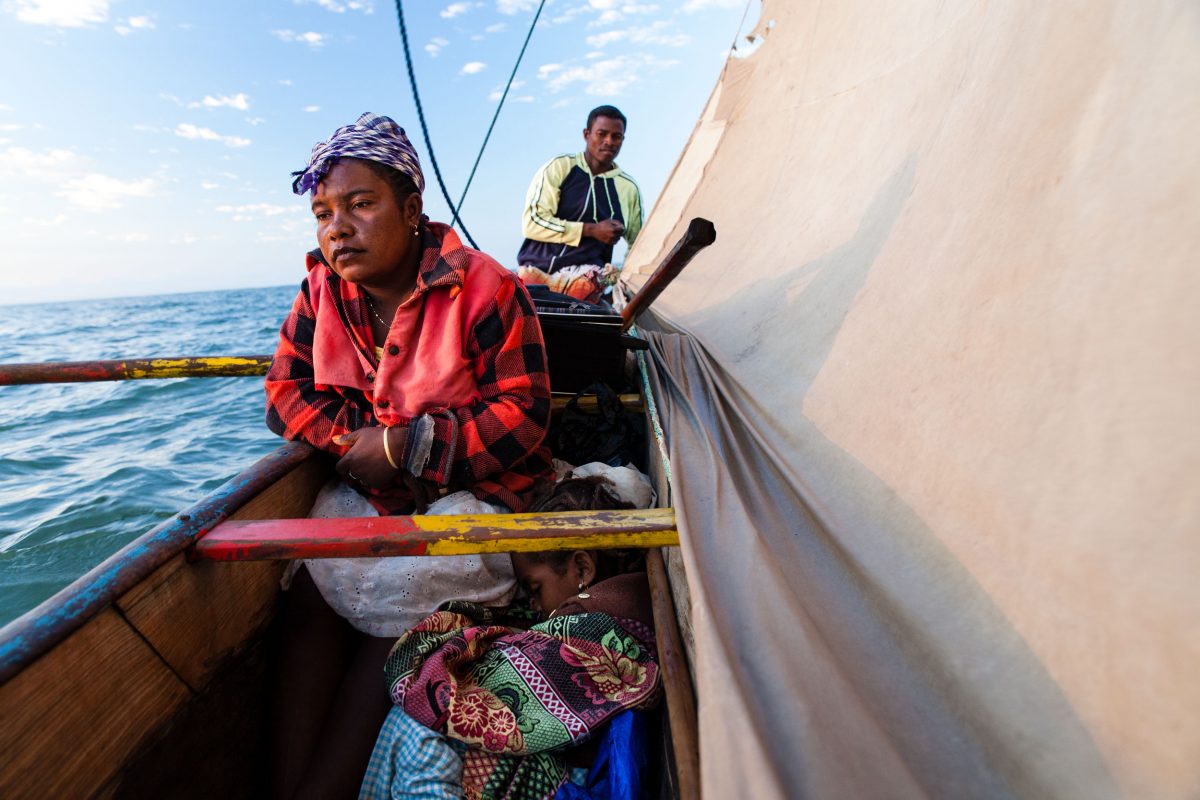 Semi-nomadic traditional fishers make their annual trip to Beanjavily, a destination on the mainland 350 kilometers north of their home village. 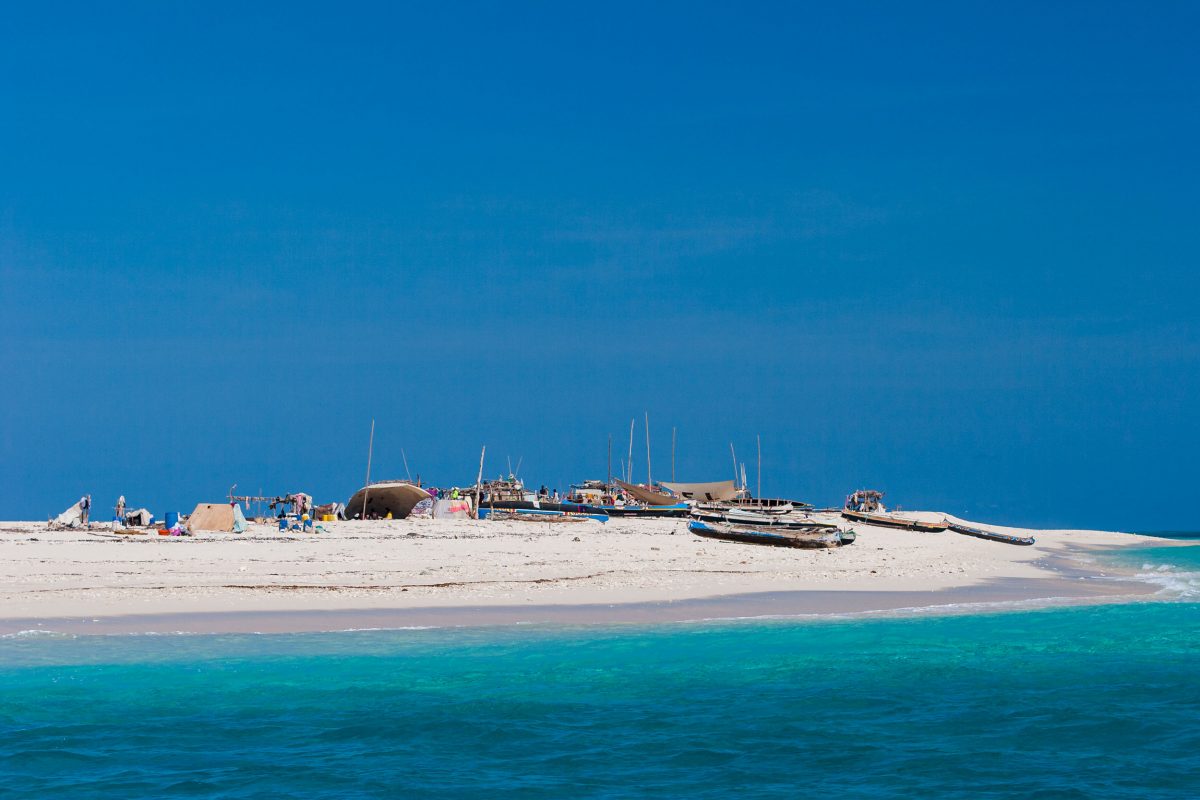 Migrant fishers camp on a sand cay about 25 kilometers off Madagascar’s west coast in the Mozambique Channel. 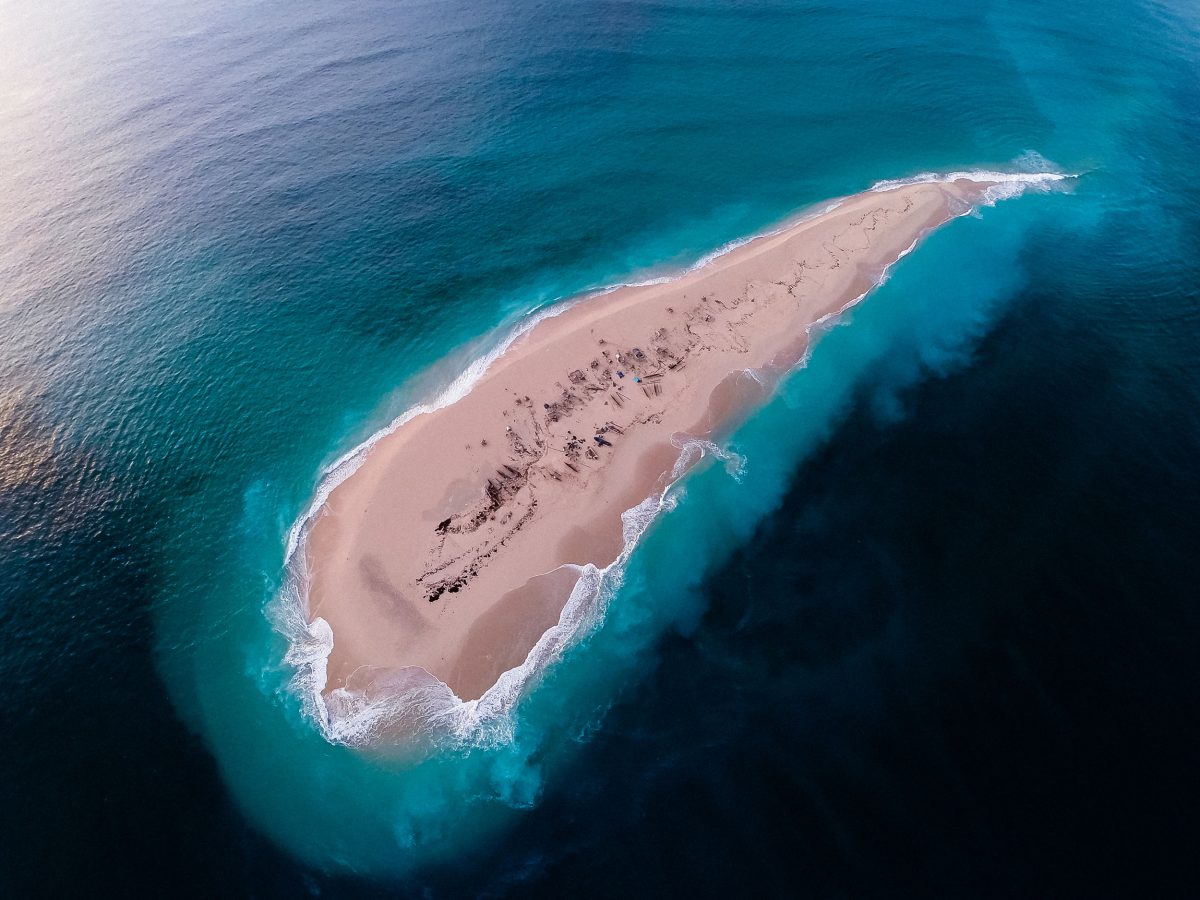 A migrant fishing camp on a sandbar in the Barren Isles. Traditional fishers live here for as long as the weather allows. 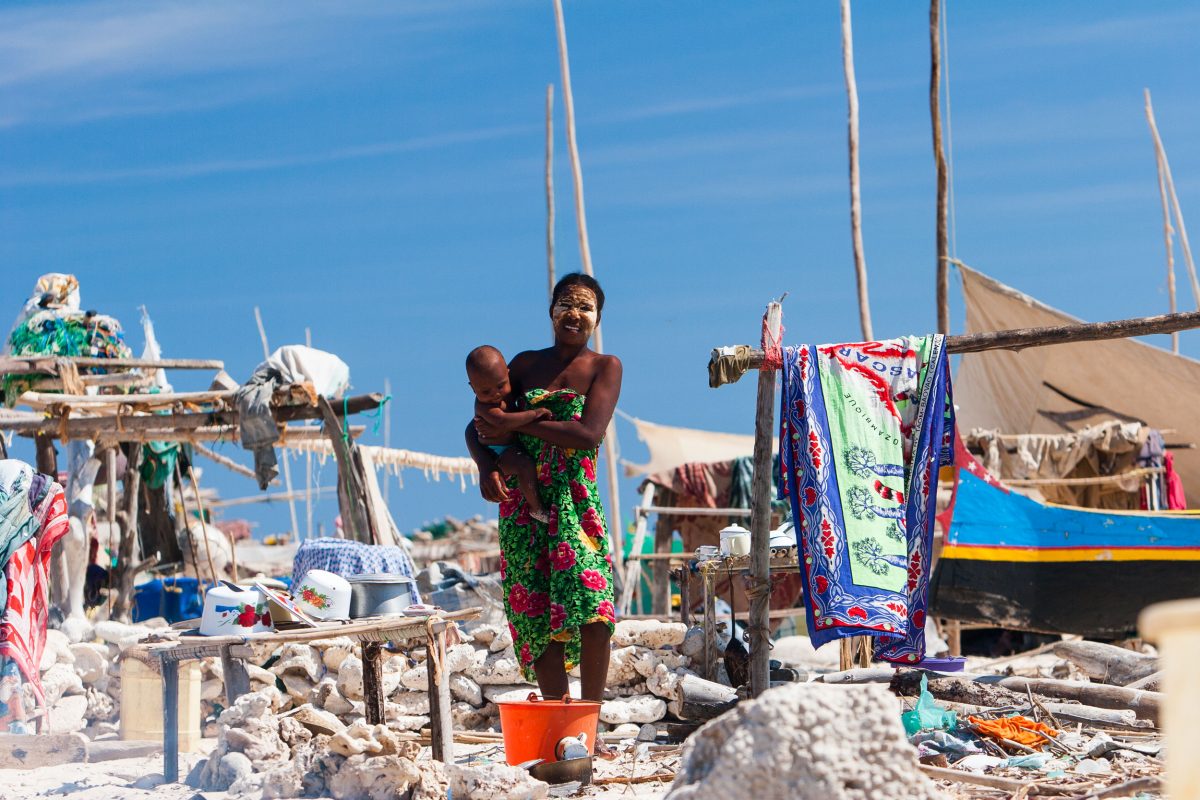 A Vezo woman and her child stand surrounded by the trappings of a migrant fishing camp on a sand cay: cooking fires, wind shelters made of coral rubble, the masts of sailing pirogues, and lean-tos of driftwood. 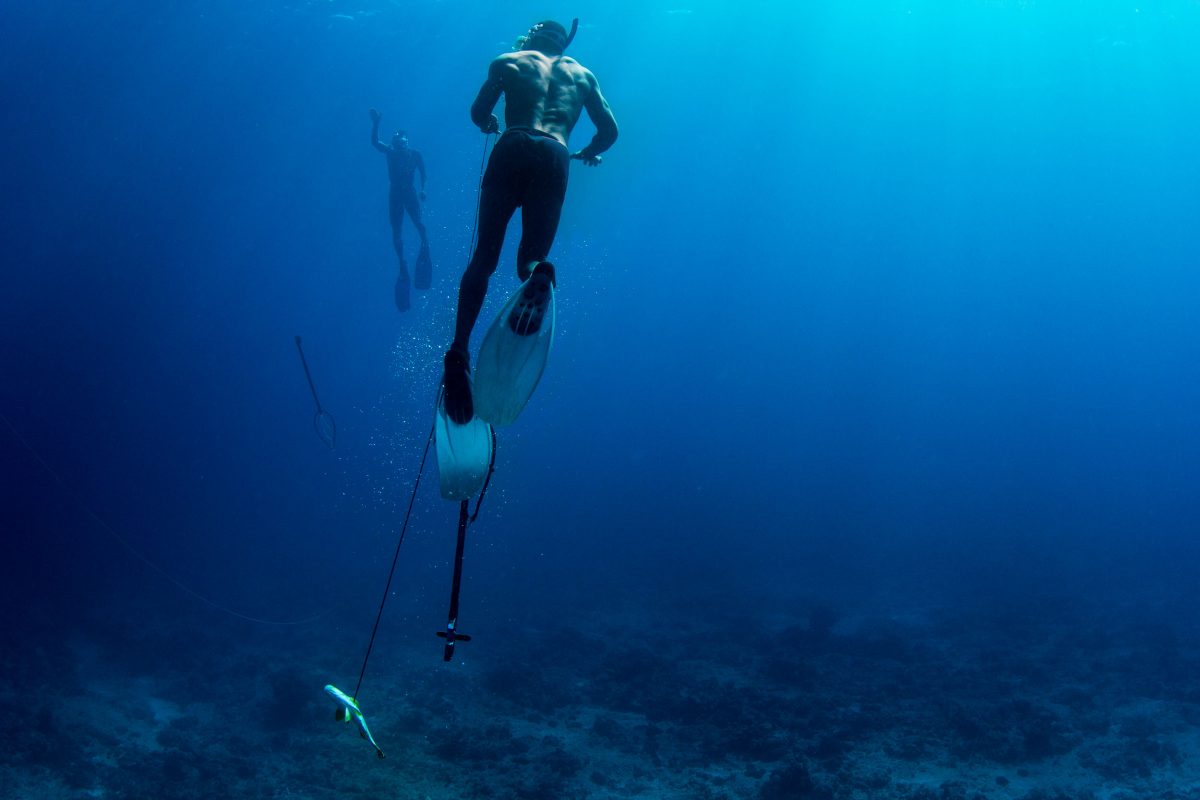 Two Vezo men spearfishing on a reef in the Mozambique Channel west of the Barren Isles. 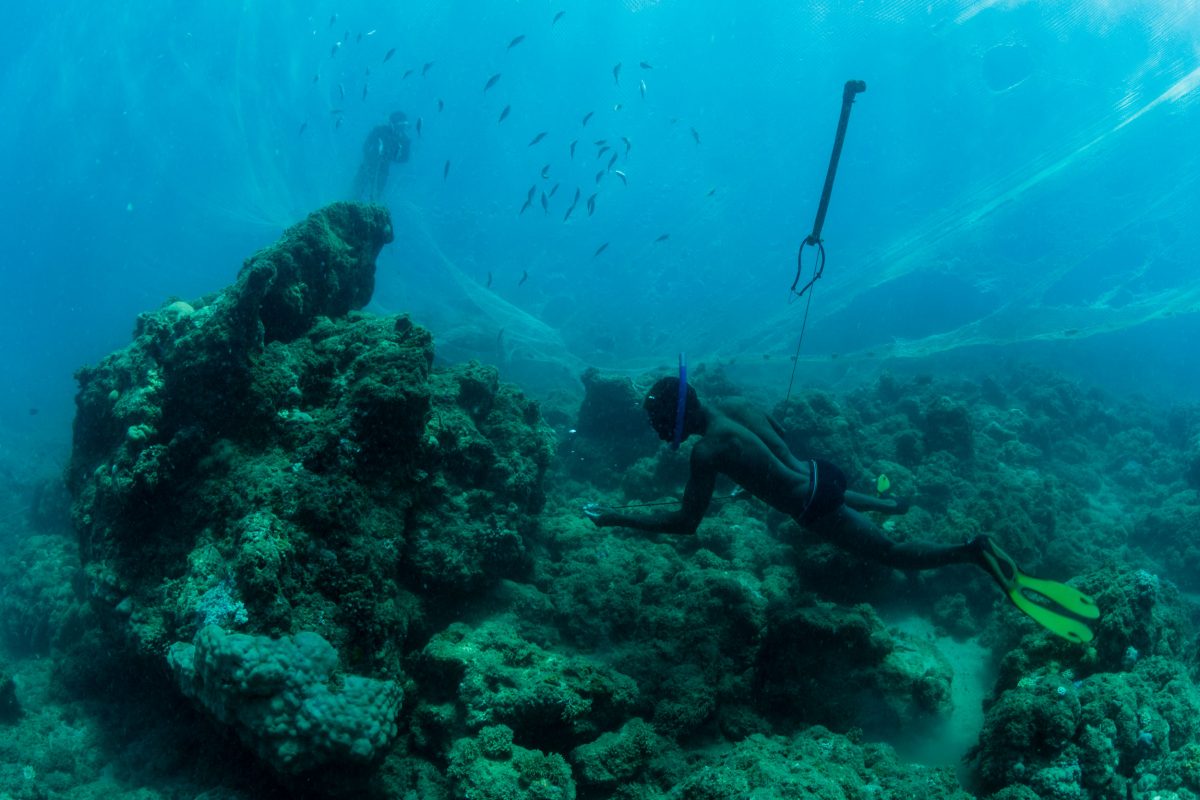 A Vezo fisherman pulls his spear from a degraded coral reef. Overfishing, combined with the initial impacts of climate change, has degraded the reef ecosystems here, further undermining fish stocks Vezo so depend on. 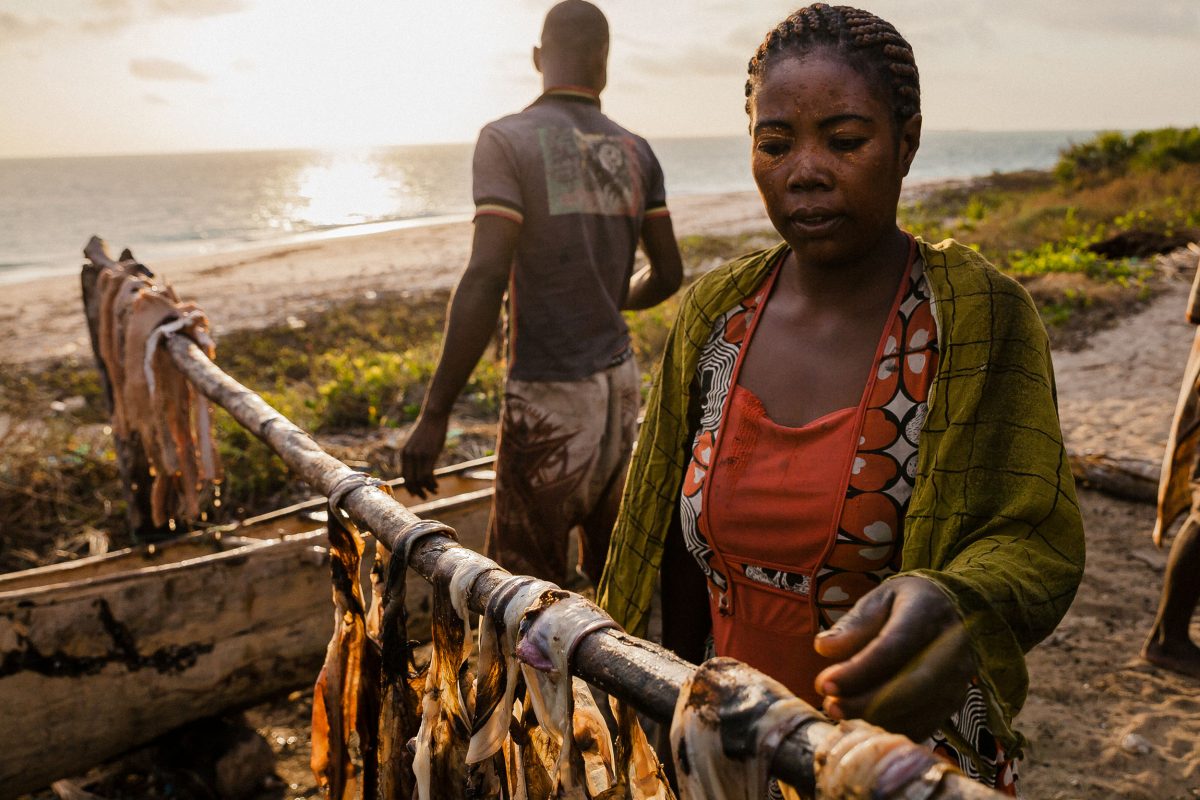 A migrant woman hangs salted octopus and shark meat out to dry before taking it to market. Only three generations ago, Vezo fished mainly for their own food, sometimes bartering part of their catch with inland people for manioc, maize, and honey. But they have since become part of supply chains feeding the global seafood market. 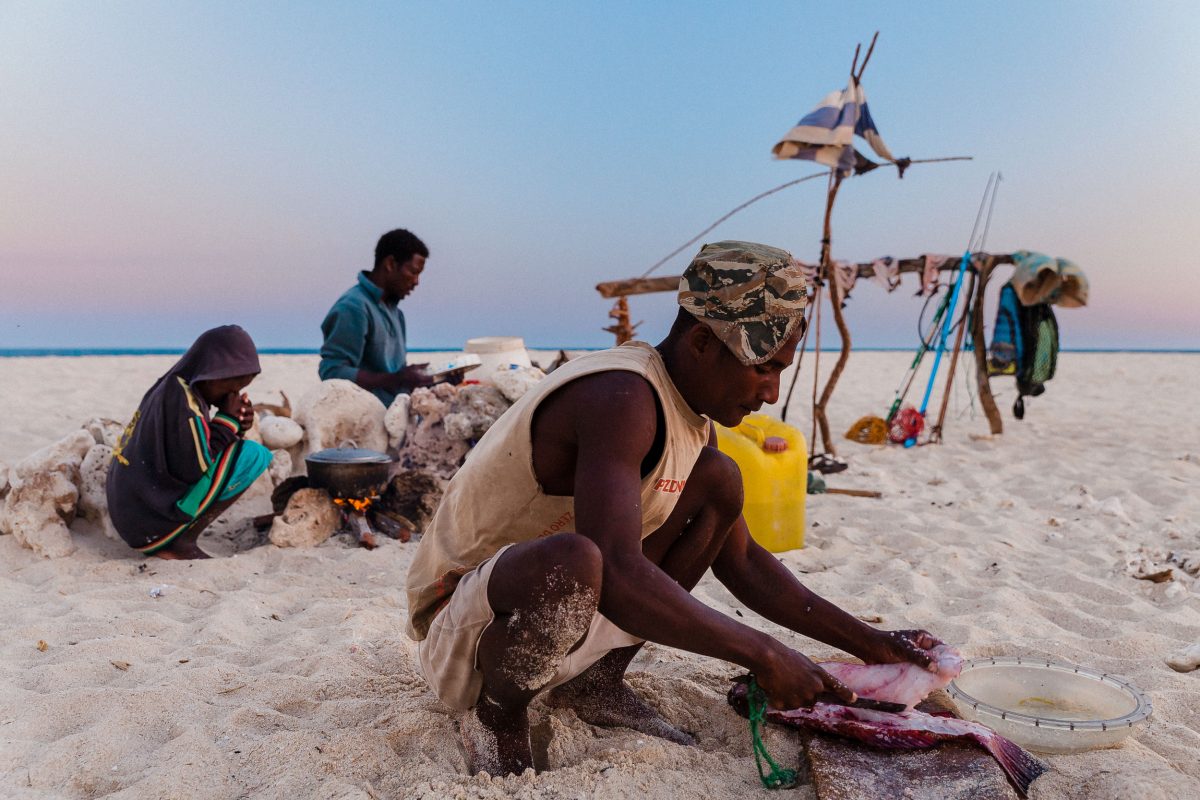 A fisherman fillets fish for supper at his camp on a sandbar.