Nudibranchs, or sea slugs, such as this Spanish dancer (Hexabranchus sanguineus), are some of the ocean’s most stunning and colorful invertebrates. Photo by Norbert Wu/Minden Pictures

William Saville-Kent, the commissioner of fisheries for Western Australia, was exploring the Houtman Abrolhos Islands for their pearl farming potential in 1894 when he spotted what he thought was a sheep’s lung floating in the ocean.

An organ sloshing around in the surf was not entirely outlandish. Workers at the remote islands’ guano mining station regularly killed sheep for food and tossed the offal. And the blood-red, footprint-sized object was frilly, reminding him of a lung. Being an avid naturalist, Saville-Kent watched it drift about the jetty for a few moments. He soon recognized it as a large nudibranch, one of a group of shell-less mollusks that live in seas around the world. And while he wasn’t watching a lung, the animal did have a lung of sorts—nudi branch translates to naked gill, referring to the exposed gills these animals sport on their backs.

Saville-Kent’s first impression of floating animal flesh is also understandable. Nudibranchs are some of the most vividly colored marine animals, and sanguineus, part of the scientific name of the scarlet Spanish dancer he saw that day, literally means blood colored.

Naturalists have waxed poetic about nudibranchs and their blazing colors, so beauty is often the only attribute most people know about. But like any creature, their world is complex and often dangerous—there’s a threat in that riotous color. “It’s almost exclusively to warn predators they’re distasteful,” says Terry Gosliner, senior curator at the California Academy of Sciences in San Francisco. The nudibranch expert who’s discovered more than 1,000 species says that unlike other mollusks that grow a shell, the first line of defense for many nudibranchs is chemical, not physical. They emit toxic compounds—which they either make or extract from their prey—so they taste terrible. Their colors are signals to potential predators: “Hey, fish, that highlighter-yellow blob with electric blue gills tastes rotten and is going to make you sick!”

Foregoing a shell also gives nudibranchs increased maneuverability. And they actively overpower and eat dangerous or stinger-studded prey such as anemones, corals, and sometimes even other nudibranchs.

Unless they live near the sea and make a habit of scouring the intertidal zone at low tide, landlubbers rarely have an opportunity to see nudibranchs. But as GoPros and scuba diving have opened windows into the sea, allowing us to capture images of these obscure beauties, more and more people can behold the nudibranch up close, even taking it upon themselves to compare them to the flamboyance of David Bowie or, like Saville-Kent, even to sheep. 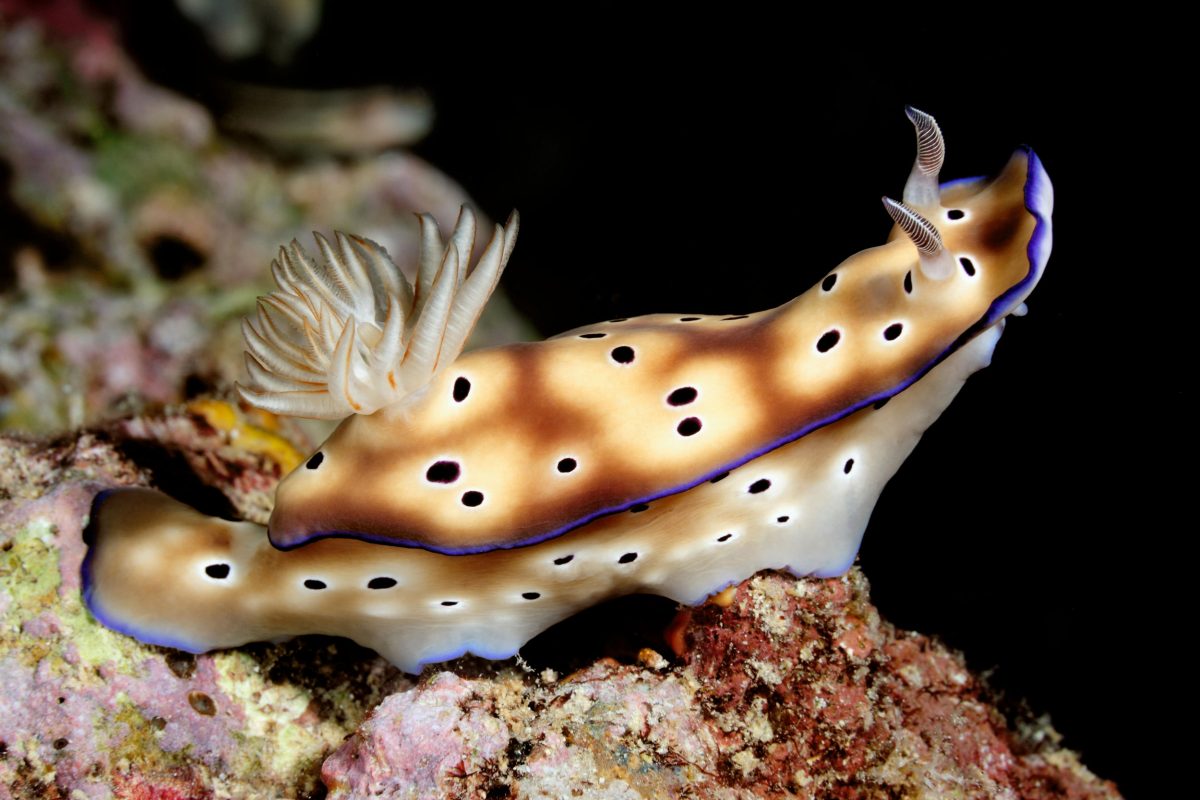 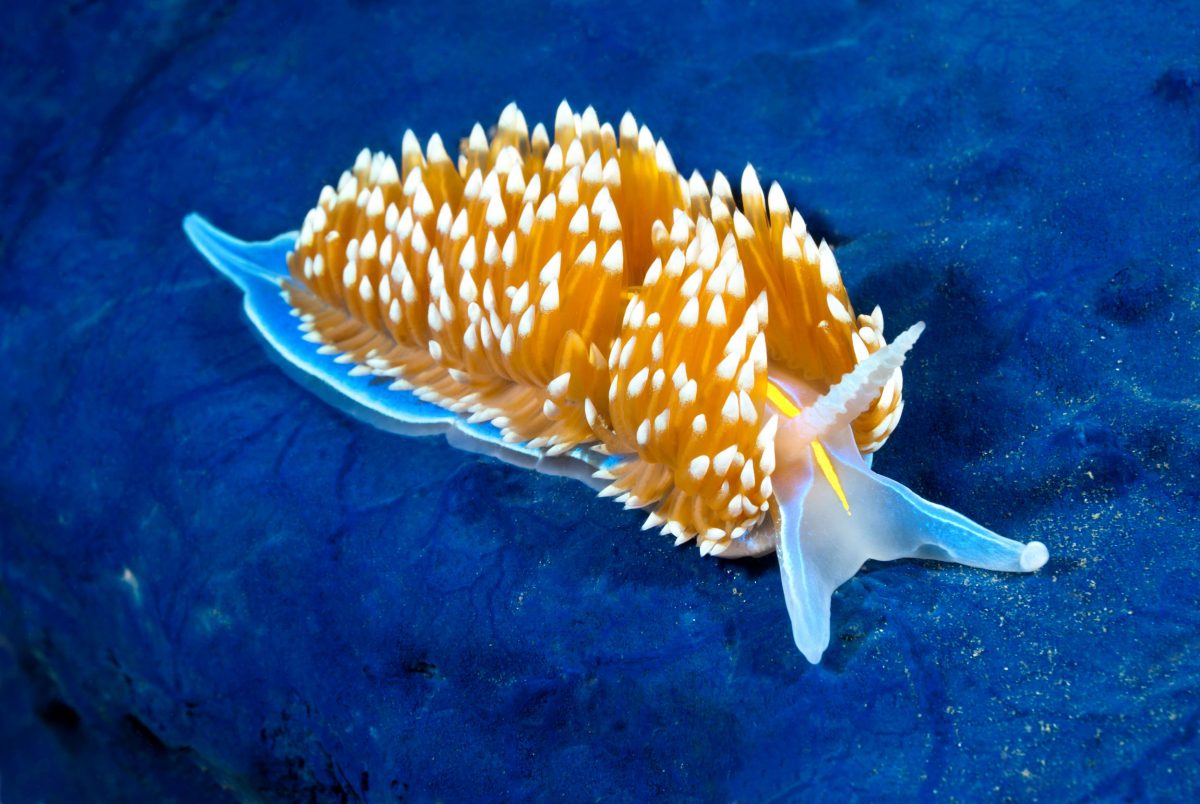 Eolid nudibranchs, like this Hermissenda crassicornis, tend to be slim with thin mantles covered in appendages called cerata. The cerata, which can resemble spines, ridges, or pustules, have multiple functions. They act as gills and are extensions of the digestive system, providing storage space for toxins the nudibranch extracts from its ingested prey. The nudibranch can even sever its cerata leaving them as decoys to distract predators. 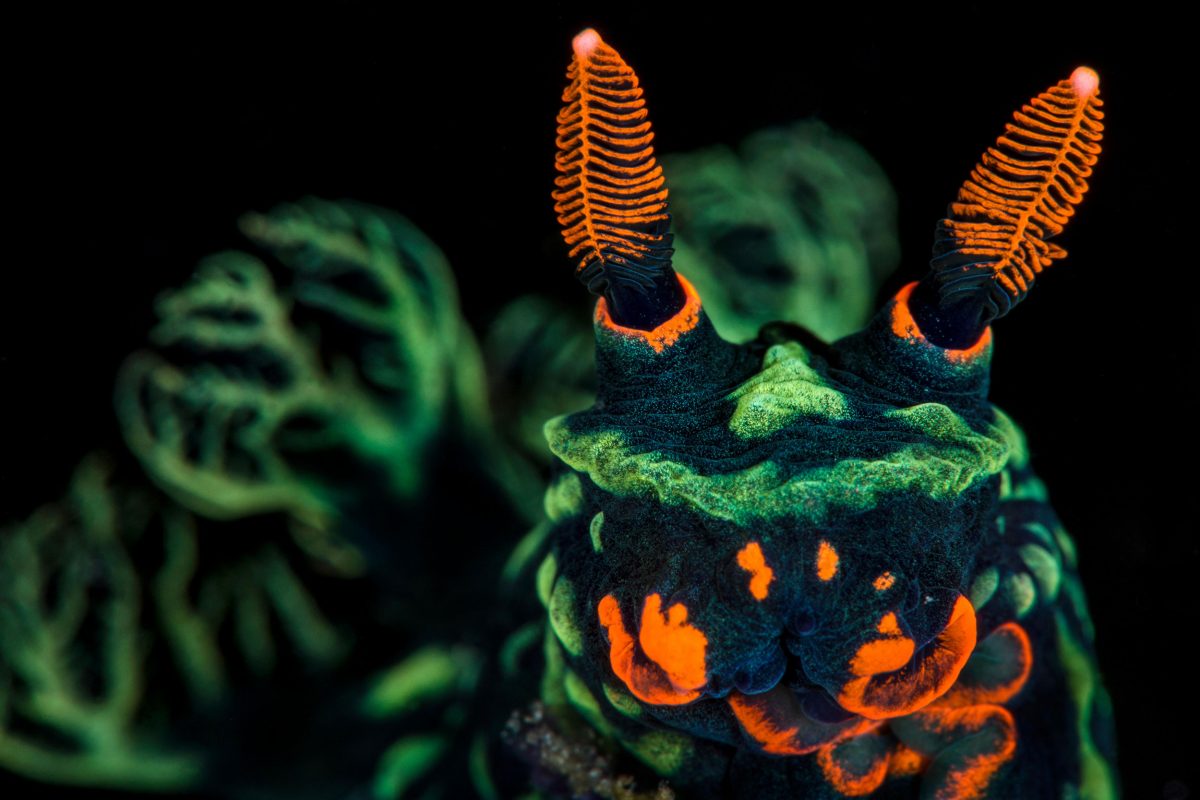 Nudibranchs detect olfactory clues in the water around them just as land-based creatures smell the air or taste potential food. These chemical cues are how they find food and mates. “They’re really living in a chemical world,” says Gosliner. Nudibranchs, like this variable neon slug, Nembrotha kubaryana, sport their chemosensory receptors on their heads in organs called rhinophores. These little stalk- or club-like structures constantly “taste” the water for traces of food. Rhinophores are unique to nudibranchs and their close cousins, including sea hares. 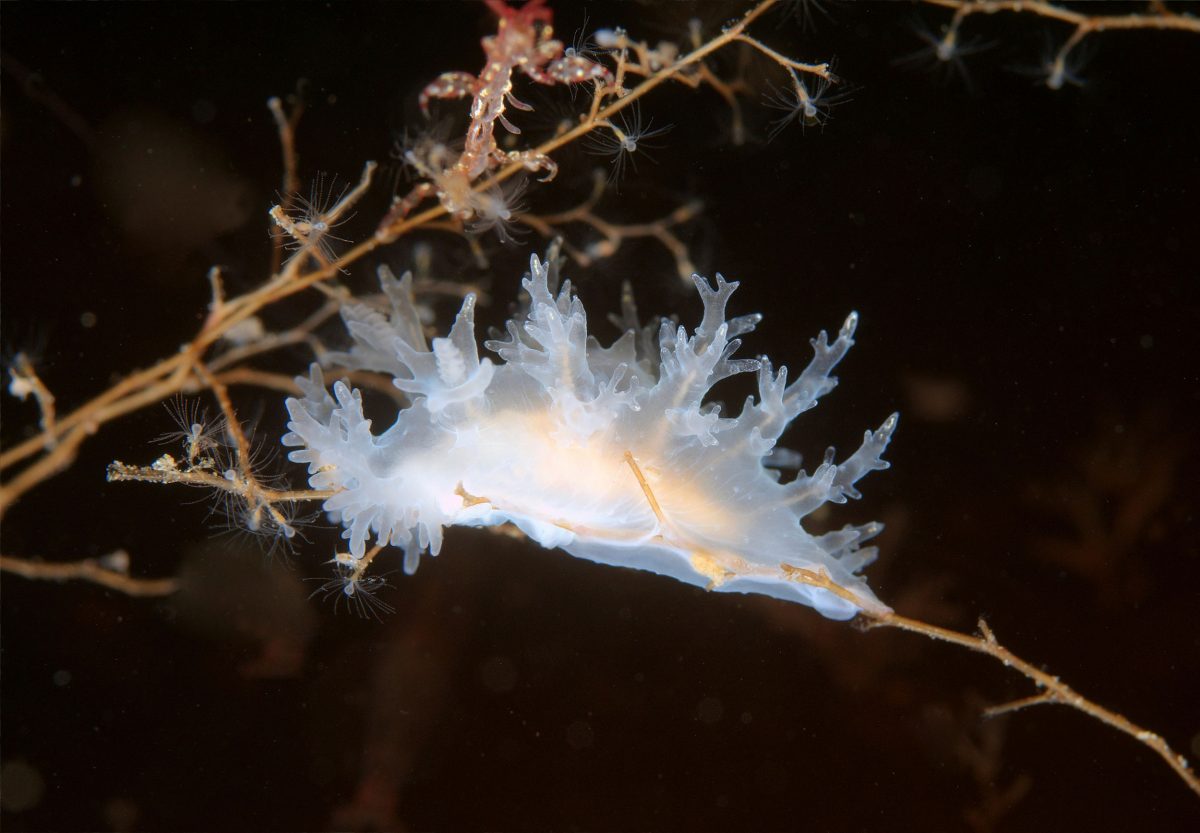 Gosliner says that despite the approximately 3,000 known species of nudibranchs, we still probably only know about half of them. Nudibranchs inhabit most areas of the sea from the intertidal zone to the deep ocean, from the tropics to the poles. Most nudibranchs are benthic and travel on or near the seafloor, crawling along using a flat, fleshy foot. This lacy benthic species called Dendronotus frondosus lives in cold northern waters. In this image, the nudibranch dines on hydroids, its primary food source. 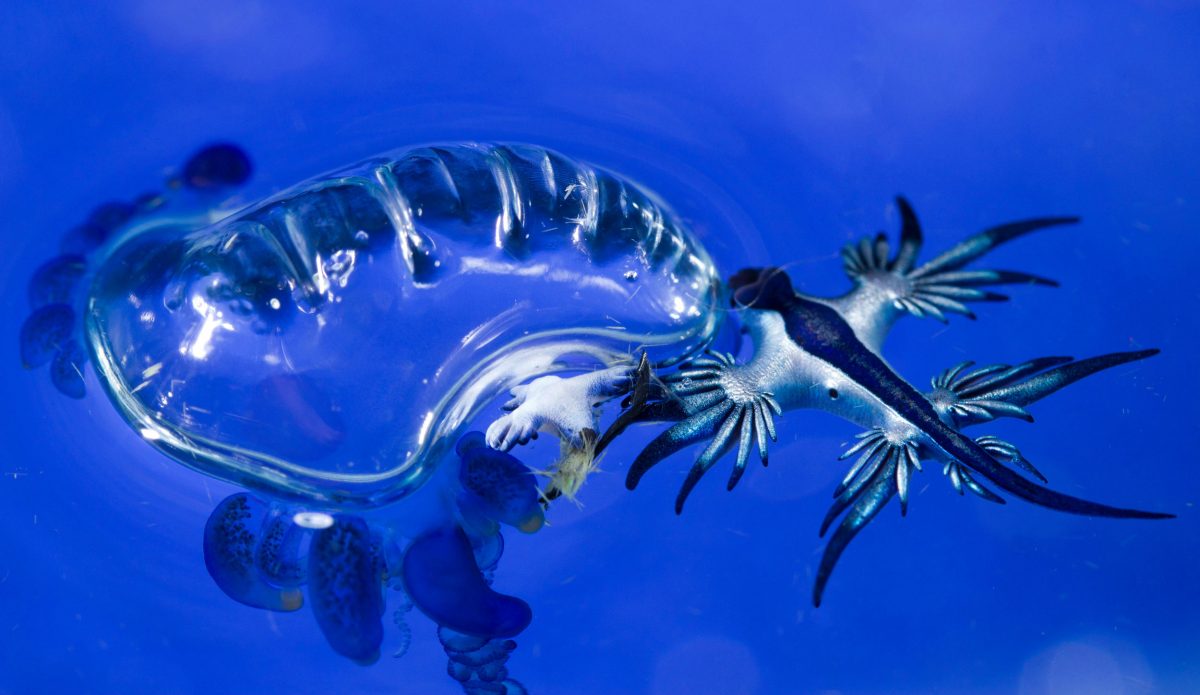 Shells offer good protection, but they take a lot of energy to build and maintain. Jettisoning the shell allows nudibranchs more flexibility and movement than their weighed-down mollusk relatives. One nudibranch, the blue glaucus (Glaucus atlanticus), spends its life drifting on the ocean’s currents. It floats upside down at the surface, where its brilliant blue foot and pale-silver back provide perfect camouflage whether it’s seen against the sky or the water, protecting it from both swimming and flying predators. It preys almost exclusively on the venomous Portuguese man-of-war, which it can gobble without being harmed. 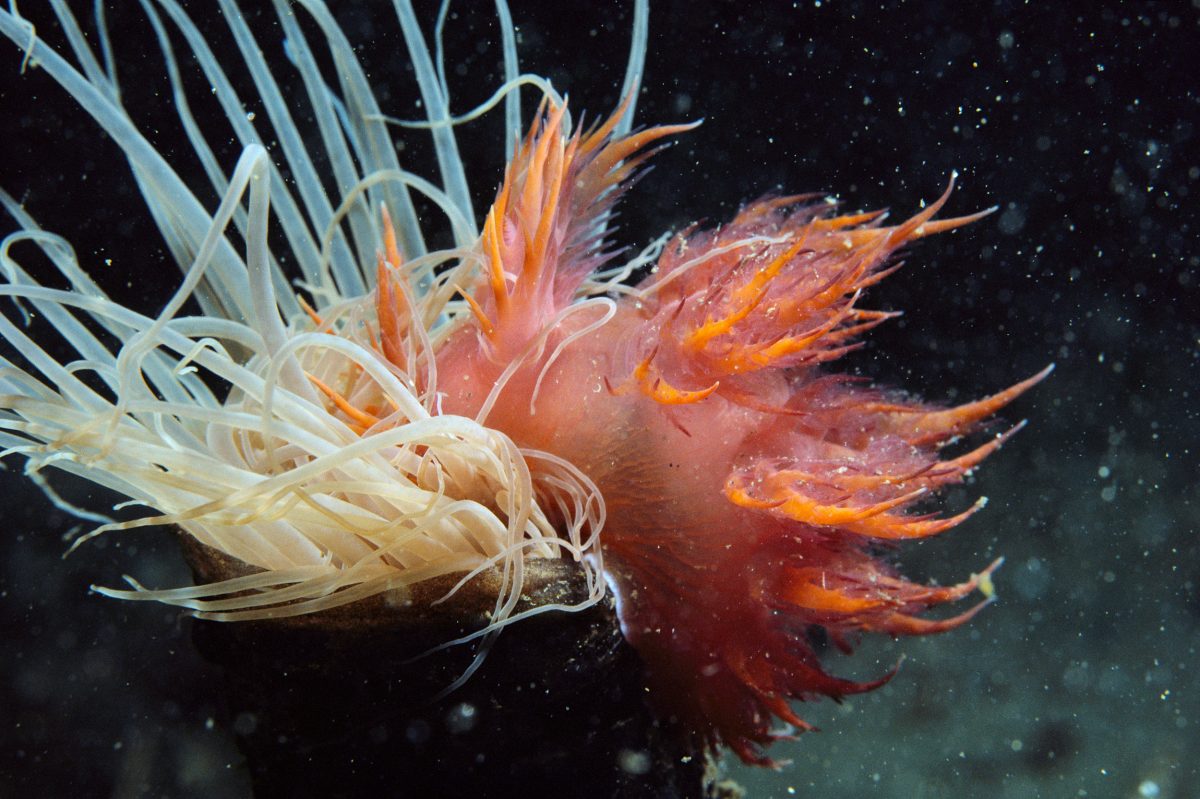 Nudibranchs get creative about defense. One strategy is to co-opt the weapons of their prey. Many nudibranchs eat anemones, corals, jellyfish, or hydroids, which all have stinging cells called nematocysts. These specialized cells contain a toxin on a harpoon-like dart that is discharged when touched. Eolid nudibranchs manage to eat these animals and their nematocysts without being harmed, as this giant nudibranch (Dendronotus iris) is doing with an anemone. The nudibranchs then store the stinging cells in the tips of their cerata like grenades with their pins intact, ready to be fired when attacked.

Nudibranchs can steal more than stings from their food. Some absorb toxins from their prey and emit them in a noxious mucus. This Indo-Pacific dorid, Chromodoris annae, eats a sponge that contains toxins. The nudibranch absorbs the toxins and stores them in the edges of its mantle as an unwelcome surprise for anything that tries to nibble it. 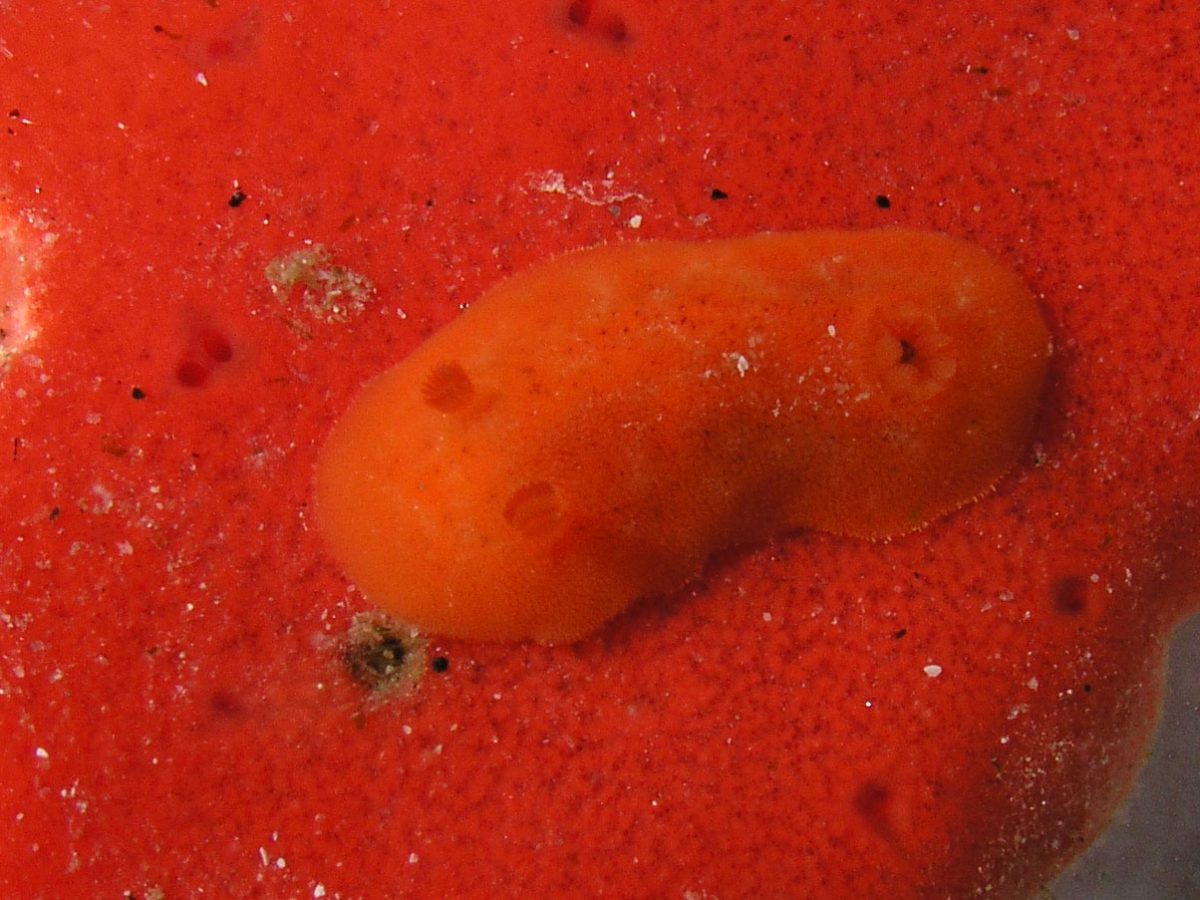 One of the largest nudibranchs is the Spanish dancer, which averages about 40 centimeters in length—almost the size of Shaquille O’Neal’s size 22 shoe—and has a bright-red color that serves as display and warning. But not all nudibranchs use their colors as loud, attention-grabbing signals. Some use them to blend in. This tiny, and also brilliant-red, Rostanga pulchra nudibranch, which isn’t much longer than a peanut, spends most of its life hiding in plain sight on similarly red encrusting sponges in the eastern Pacific Ocean. And camouflage for R. pulchra begins even before birth. The nudibranch lays its bright-red eggs in long ribbons, attached in a tight spiral to the red sponge backdrop. 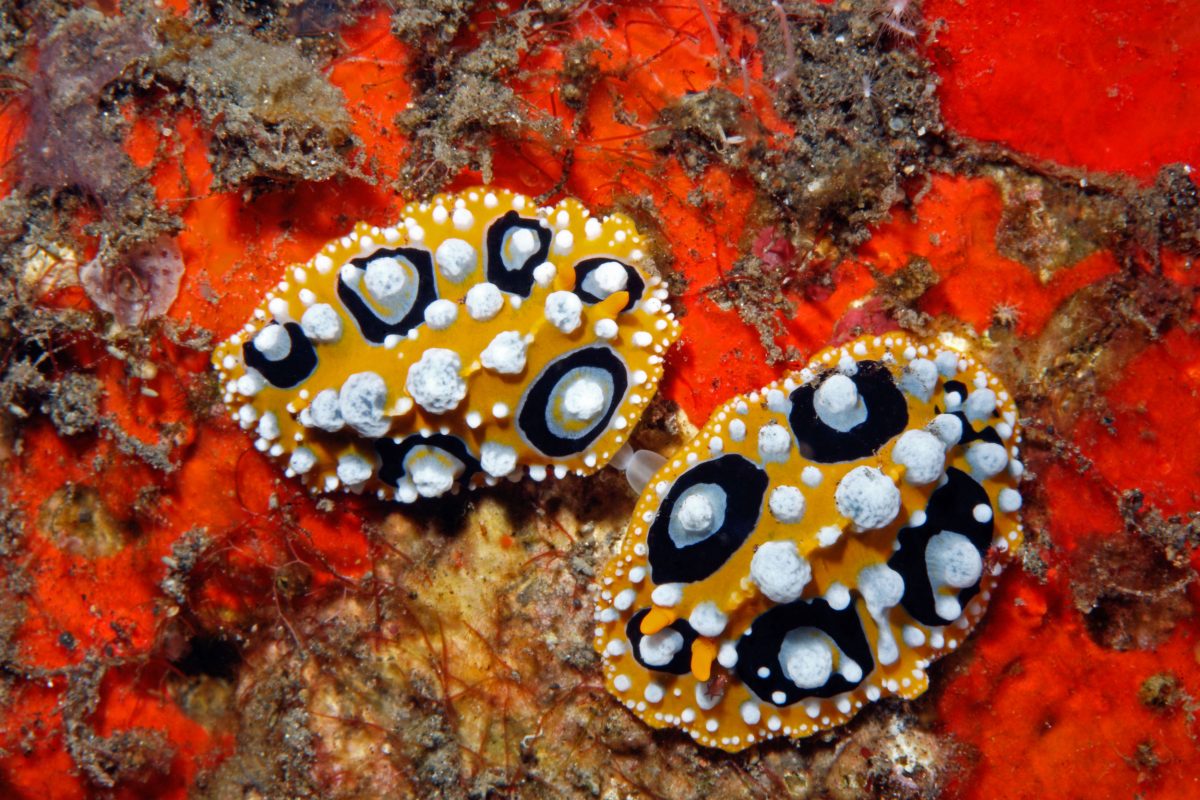 Nudibranchs are hermaphrodites, so an individual produces both sperm and eggs. Their genital openings are located just behind their heads on the right side of their bodies, so doing it “nudibranch-style” usually means lining up like two people shaking hands. Mating involves a two-way exchange, as shown by these two Phyllidia ocellata in the waters off Bali, Indonesia. They mutually extend their penises and exchange sperm, leaving both animals with fertilized eggs. Retracting the penis after mating might be more strenuous than you would think. One species, Chromodoris reticulata, doesn’t even bother—it sheds the extended part of its penis after each congress, possibly because it takes less energy than reeling it back in. 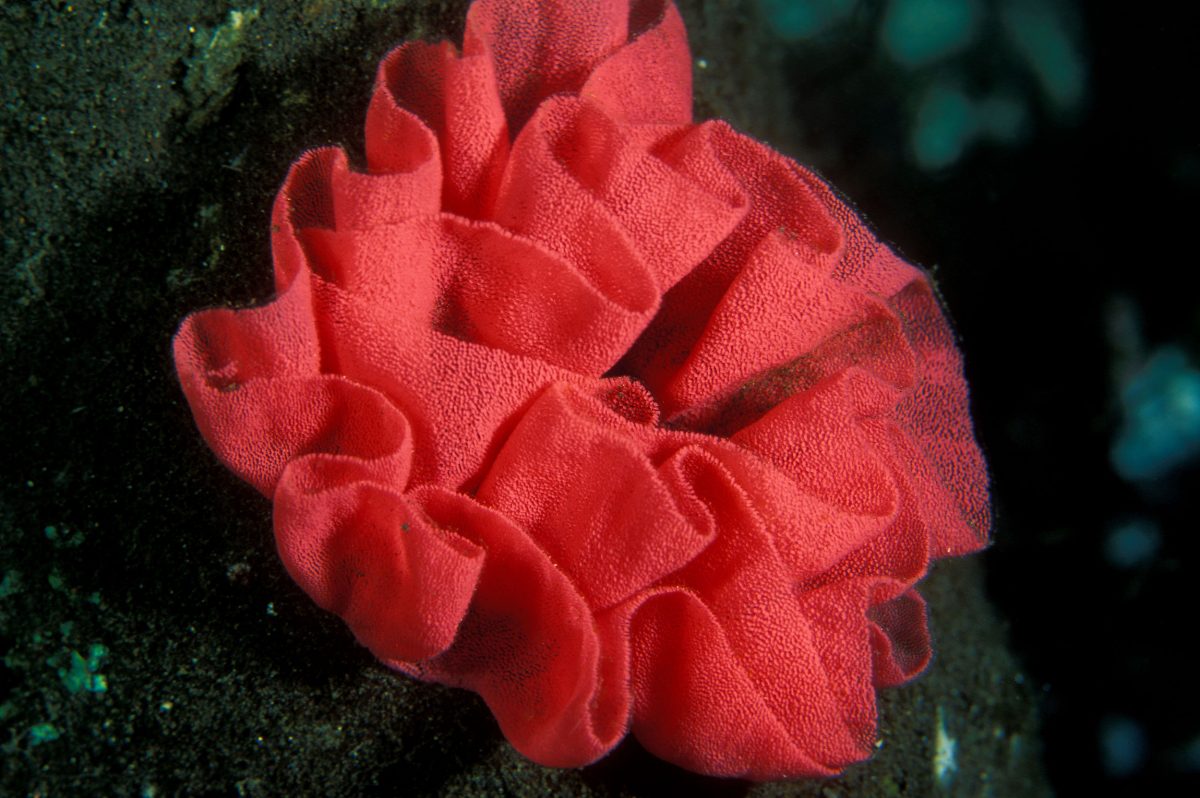 After mating, nudibranchs lay their eggs in long ribbons or strings, sheathed in protective mucus. Although the adults don’t care for the eggs, some species will cover them in defensive chemicals to deter predators. The Spanish dancer glues its ribbons of eggs on one edge, creating a palm-sized spiral like the one shown here. Its ribbons start out brightly colored but fade as the eggs develop, a process that takes about a week. Family size depends on the species. Some lay just a few eggs at a time, while others deposit several hundred or several million. 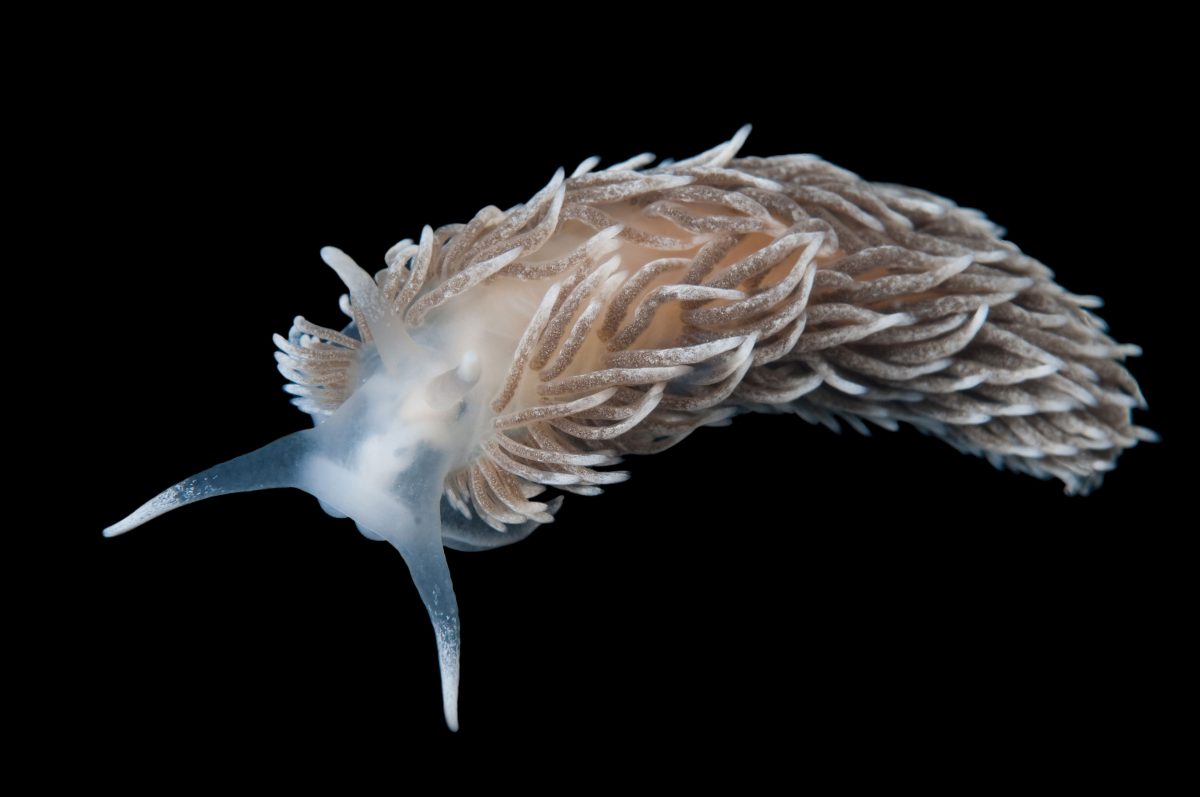 A handful of coral-eating eolid species ingest the corals’ zooxanthellae, too. These symbiotic phytoplankton live within coral tissues and provide food via photosynthesis. As with stinging cells, nudibranchs co-opt zooxanthellae for their own use. They store the plankton in their digestive glands, where they continue photosynthesizing. Scientists think this gives nudibranchs a source of food to sustain them in lean times. 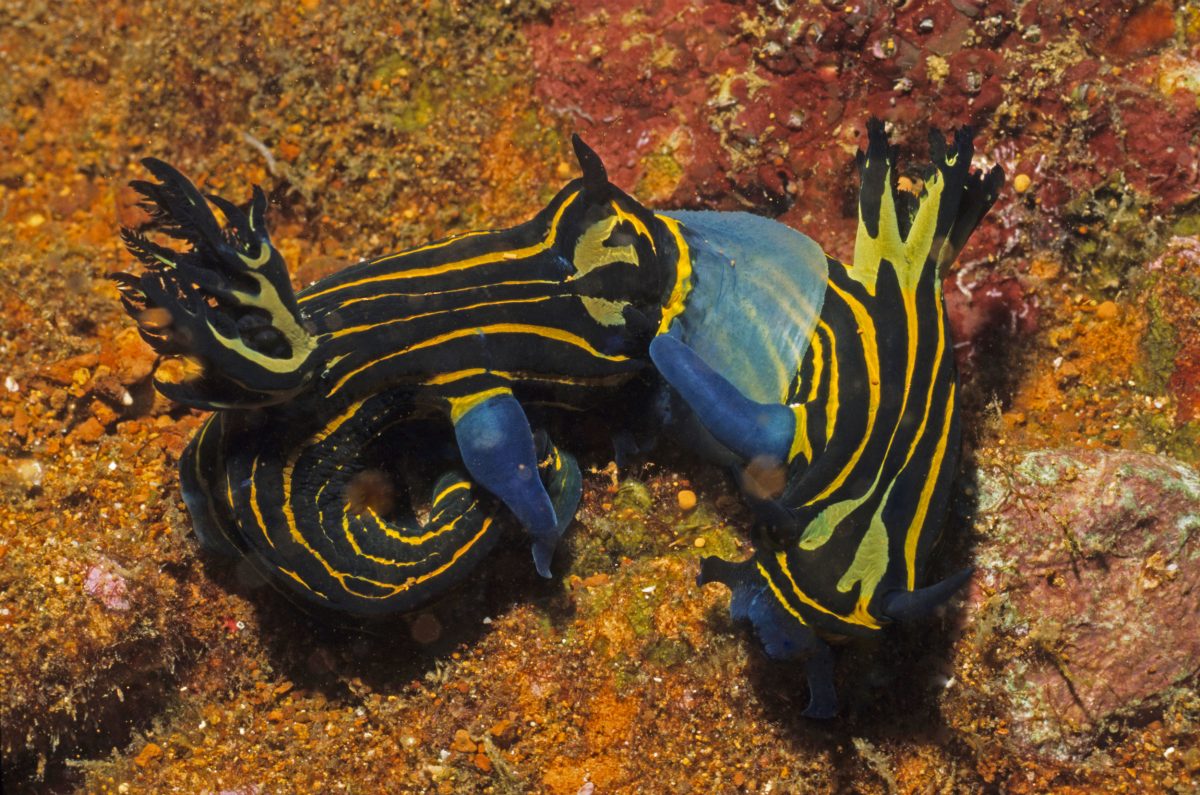 It’s a slug-eat-slug world out there, and nudibranchs must hunt when they can, even if it means chowing down on a neighbor. These Roboastra luteolineata slugs will eat smaller members of their own species as well as other prey. Other species have been spotted eating their conspecifics, too. Gosliner says he doesn’t know of a species that exclusively eats members of its own species, and that cannibalism is usually due to overcrowding or desperation. 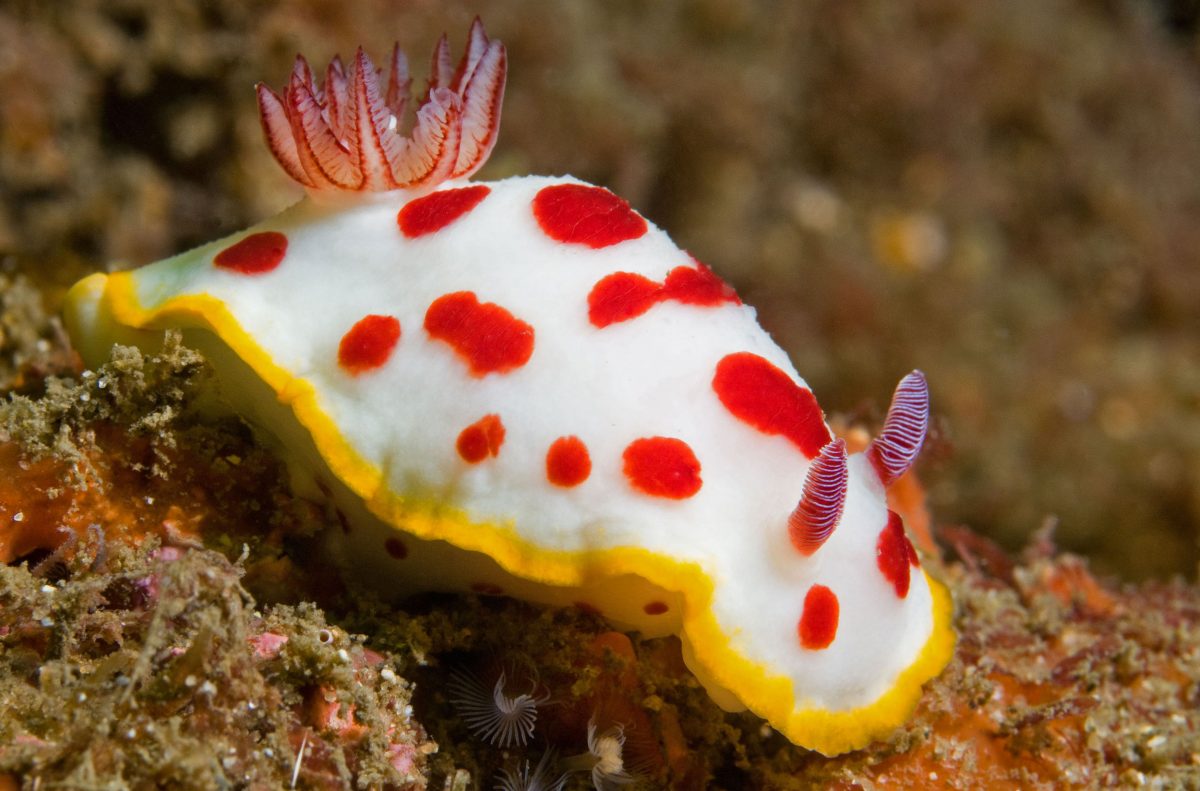 Nudibranchs are more than just a pretty gill plume. They also play significant roles in research and environmental science. Molecular biologists are investigating some species for potential medical uses. Goniobranchus splendidus, for instance, repels predators with a toxin called latrunculin A, which it ingests from its sponge prey. Researchers have found that latrunculin A is toxic to cancer cells. Nudibranchs are also useful to ecologists as indicator species. “If there’s a high diversity of nudibranchs, it’s a good indicator that you’re dealing with a healthy ecosystem,” says Gosliner. 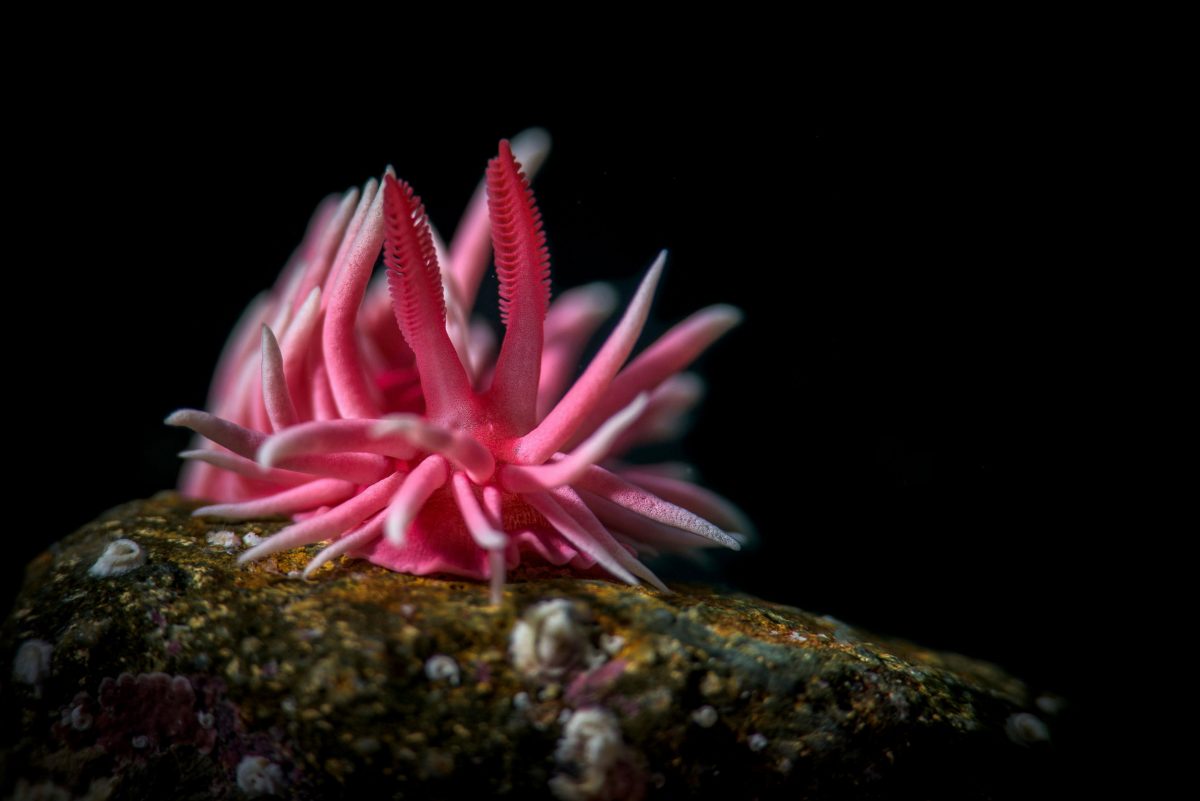 Nudibranchs can handle stinging corals and tentacled anemones, but some foes make for a more unequal match. Ocean acidification cripples nudibranch larvae, for instance. The juveniles have a small shell in their planktonic stage, which acidification weakens. Warming water has also brought ecosystem changes. “A lot of nudibranchs are changing their distribution,” Gosliner says. Populations of the Hopkins rose nudibranch, a Southern California native, shown here, exploded during the Blob warm-water event of 2014 to 2015, with abnormally large numbers of individuals suddenly showing up in the ocean north of San Francisco, adding further pressure to the local ecosystem. “In areas where you have a lot of coastal development, you have not only the impacts of climate change, but you also have greater pollution and human disturbance and habitat destruction,” says Gosliner. When all these things happen at once, their effects compound.