With the help of biologists, giant clams are making a comeback in the Philippines. Photo by Pete Oxford/Minden Pictures

One of my fondest childhood memories is of day trips with my Austrian grandmother. We’d cross the nearby Italian border and order spaghetti alle vongole—spaghetti with clams—in a favorite restaurant for lunch. I was fascinated by the little Venus clams on my plate of pasta—caught from the ocean, a world completely alien to me then—and greatly enjoyed their taste. Now, about 40 years later, I often scuba dive between rows of giant clams off the coast of the island of Luzon in the northern Philippines, about 10 hours by road north of the capital of Manila. Each clam is more than 10,000 times the size of the vongole I enjoyed decades ago. Four species of giant clams are bred here and raised in an ocean nursery by my colleagues at the University of the Philippines in an effort to restock the bivalves, whose wild populations are perilously low. Though it is currently illegal to harvest giant clams, places such as the Philippines and other countries in Southeast Asia, where human populations are large and people get a significant amount of their protein from the ocean, are especially dangerous for such immobile giants.

A reef assessment done in the 1970s showed that giant clams were close to becoming locally extinct in the Philippines due to poaching, overharvesting, and habitat destruction. As a response, in the mid-80s University of the Philippines Marine Science Institute founding director Edgardo Gomez imported clam larvae from the Solomon Islands and Palau. Gomez and his colleagues then reared the clams at the university’s marine lab in the coastal municipality of Bolinao on the west coast of Luzon. From there, the scientists relocated the juvenile clams to different parts of the archipelago. These efforts, spanning more than 30 years, have been successful due to the enthusiastic work of young Filipino marine biologists. Where clam populations had been completely depleted in the wild, they now have been replanted. In an age of constant bad news about the state of the environment, the re-establishment of giant clams in the Philippines is a welcome environmental success story. 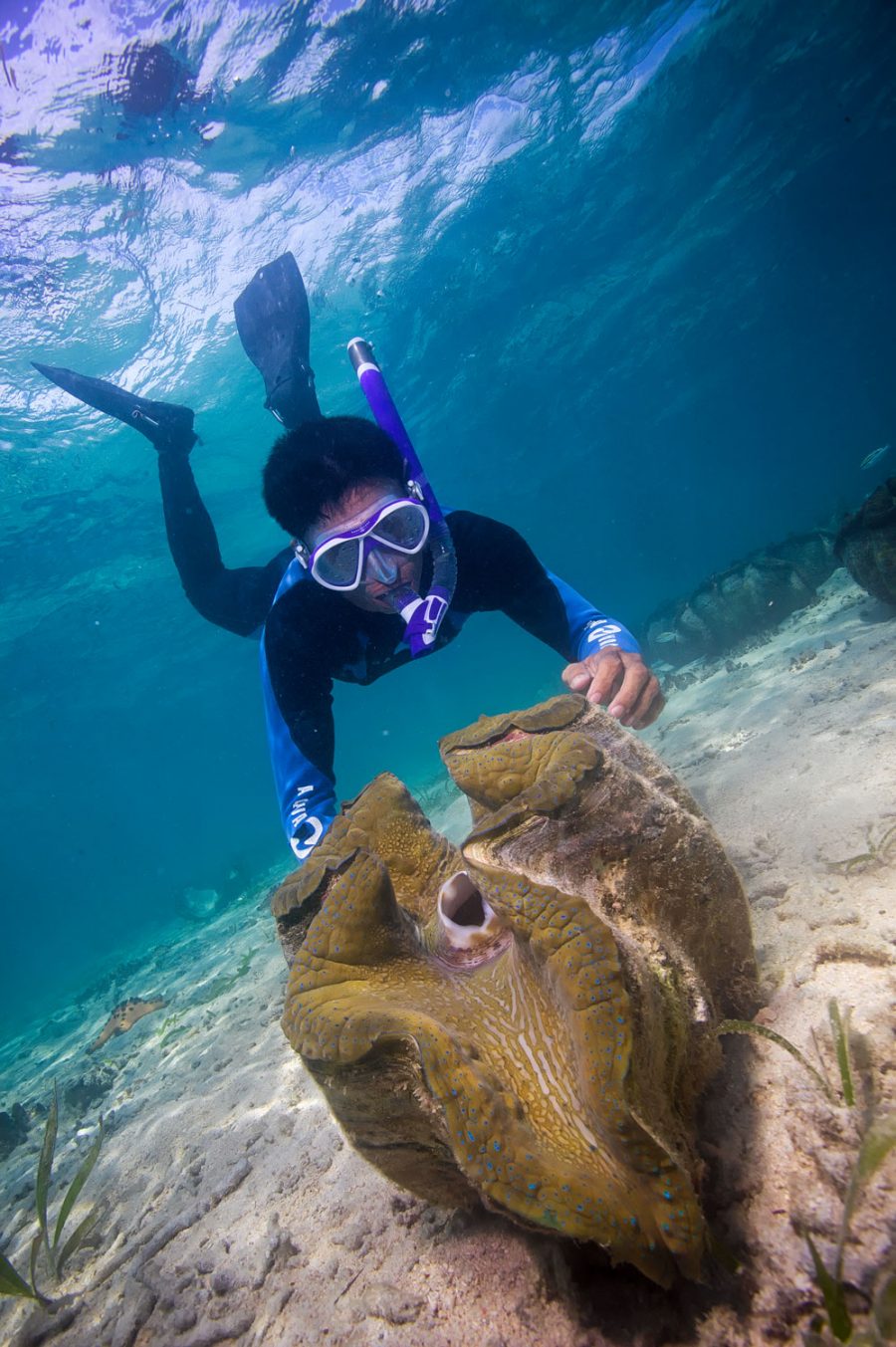 University of the Philippines marine lab research assistant Renato Adolfo is a grown man, but this giant clam looms large in comparison. Of the 13 known species of giant clams, the largest is Tridacna gigas (shown here), which can weigh up to 500 kilograms—about five times as much as me, an amateur heavyweight strongman competitor—and have a shell over a meter long. This species is the second-heaviest invertebrate on the planet; only the deep sea’s giant squid is larger. Although giant clams filter-feed plankton, they also derive energy from photosynthesis, so must live in shallow, light-flooded habitats, such as seagrass meadows, as in this image, or in coral reefs. 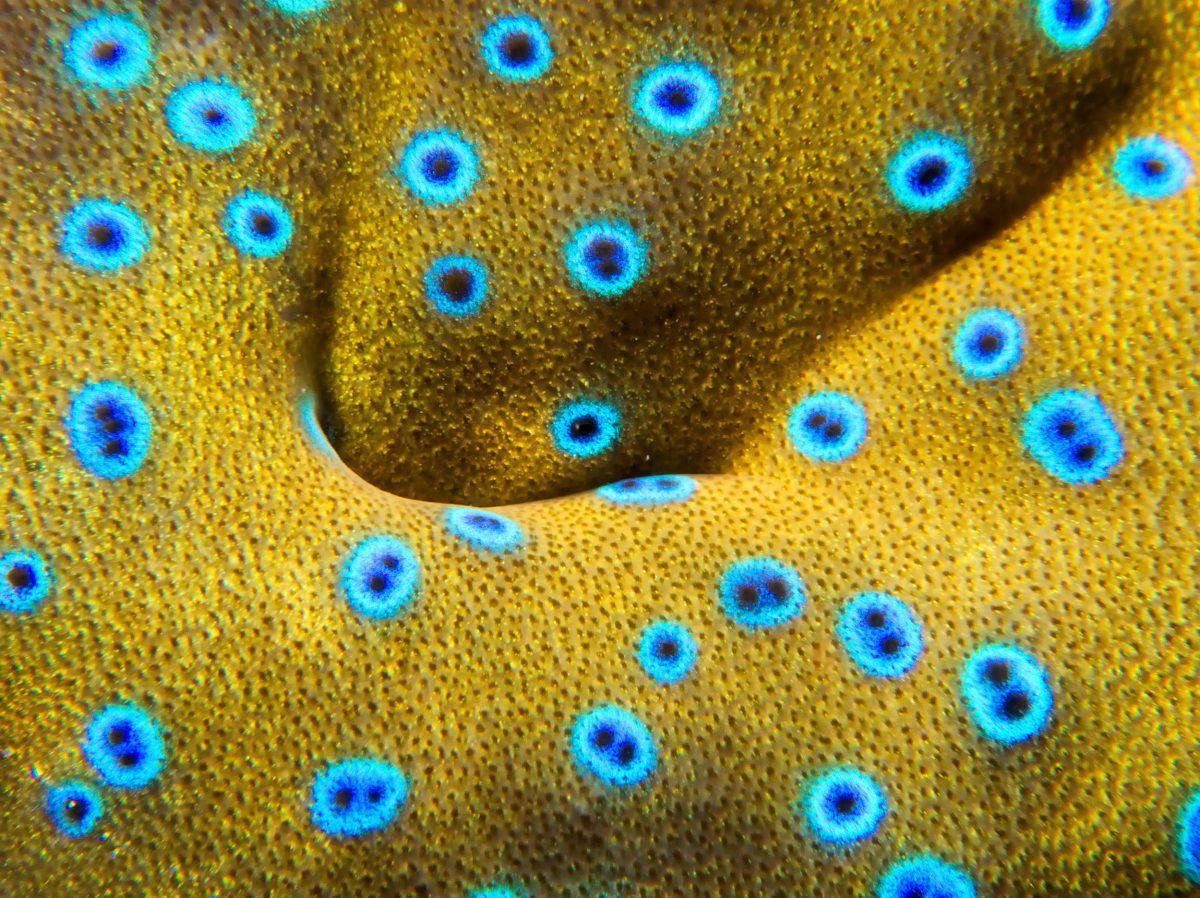 When a clam’s shell is open, you can see a frill of flesh along its edges. This is the clam’s mantle, the part that encloses its internal organs. Its colors and patterns explain some of the clam’s biology. The mantle of this T. gigas, for instance, is dark yellow because of a symbiotic algae, Symbiodinium. Through photosynthesis, the algae provide energy to the clam. The blue dots are iridocytes, specialized cells that funnel light onto the algae deep in the mantle, akin to biological fiber-optic cables. Different clam species show different patterns of iridocytes and the color of the mantle also varies. It can be yellow, blue, purple, or orange depending on the particular species of Symbiodinium the clam hosts. The partnership between giant clams and the algae occurs early in a clam’s life. About four days after fertilization, when the eventual giants are still tiny larvae, the clams absorb the symbiotic algae from the surrounding seawater. The algae are initially ingested like food, but instead of moving through the digestive system, they’re translocated into the tissues of the growing animal. 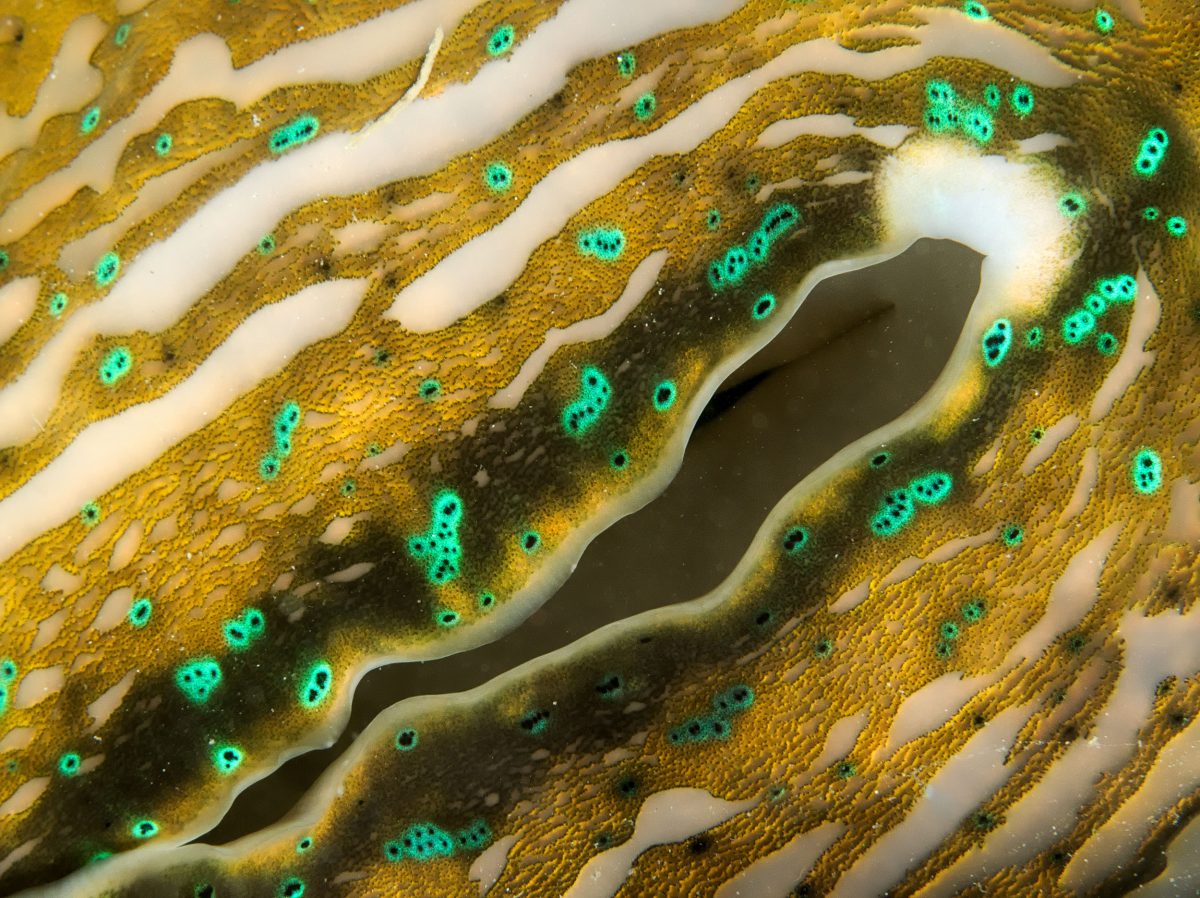 Like tropical coral, giant clams are susceptible to bleaching. When water temperatures are several degrees Celsius above normal for weeks at a time, the clams expel their symbiotic algae, and, as a result, areas of their mantles turn eerily white. In some cases, the tubular system in the mantle that normally houses the algae—sort of an algae farm for the clam—atrophies.

In contrast to corals, which often die after bleaching due to a lack of algae-derived nutrition, most clams usually recover when the temperatures normalize and the population of symbiotic algae is re-established from the seawater. The clam’s color returns, as does its energy budget as the algae begin to photosynthesize. 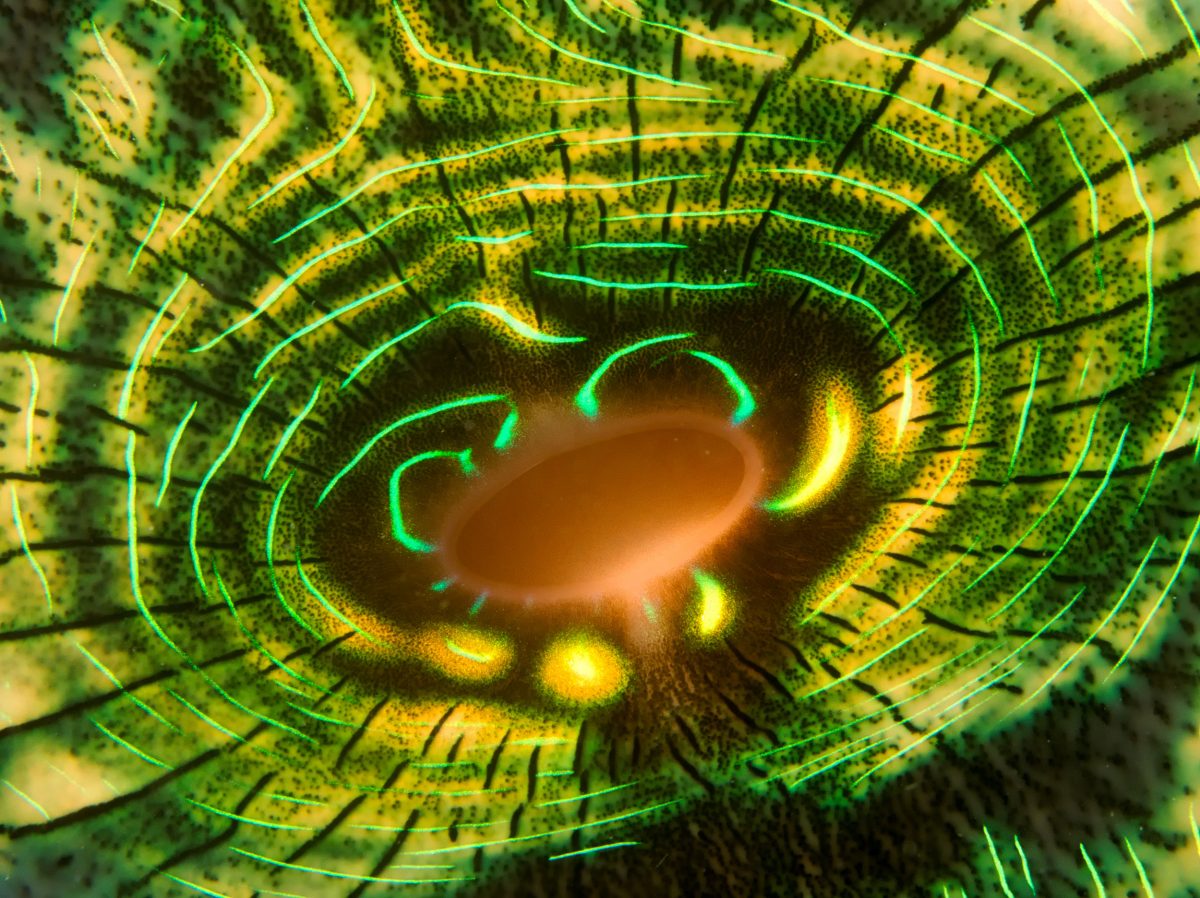 Without a frame of reference, this exhalant siphon of a giant clam could be mistaken for Jupiter’s Great Red Spot. In reality, it’s the opening through which a giant clam expels water after it has filtered out the plankton. Egg and sperm cells, as well as metabolic waste products, are also released through the siphon. Clams bring water, full of fresh oxygen and food, into the mantle cavity through a slit-like inhalant siphon.

Divers can sometimes feel the power of the exhalant siphon if they swim close. Clams have rudimentary vision and can only distinguish light and dark. If a diver looms overhead, the clam contracts its mantle and closes its shell, forcing the water out of its siphon and blasting the diver with a powerful jet of water.

This is the smooth giant clam, Tridacna derasa, and it shows a different pattern of iridocytes—made of lines rather than dots—than the T. gigas shown in the last two images.

To accelerate the breeding of giant clams in the lab, University of the Philippines Marine Science Institute researchers inject them with the hormone serotonin, which rapidly triggers the release of clam sperm, seen here, and the release of eggs minutes later. The mass release of gametes is called broadcast spawning. The medium-sized clams in this video are about 20 years old and were brought from the ocean nursery into the marine lab’s hatchery especially for this occasion. After the gametes have been collected, the clams will be returned to the ocean.

Lala Grace Calle, a graduate student at Bolinao who monitors the clams once they are transplanted into the ocean, explains that giant clams have lengthy life spans that involve a sex change. “Giant clams are actually hermaphrodites,” she says. “When they reach the age of two to three years they first mature only as males, but when they reach nine to 10 years they also become females, and then they can release both eggs and sperm.” If they survive the ocean’s many hungry filter feeders—from sponges to corals to bivalves—when they are planktonic larvae, and the shell-crushing teeth of triggerfish and the hands of poachers once they settle on the ocean floor, giant clams can live up to 100 years. 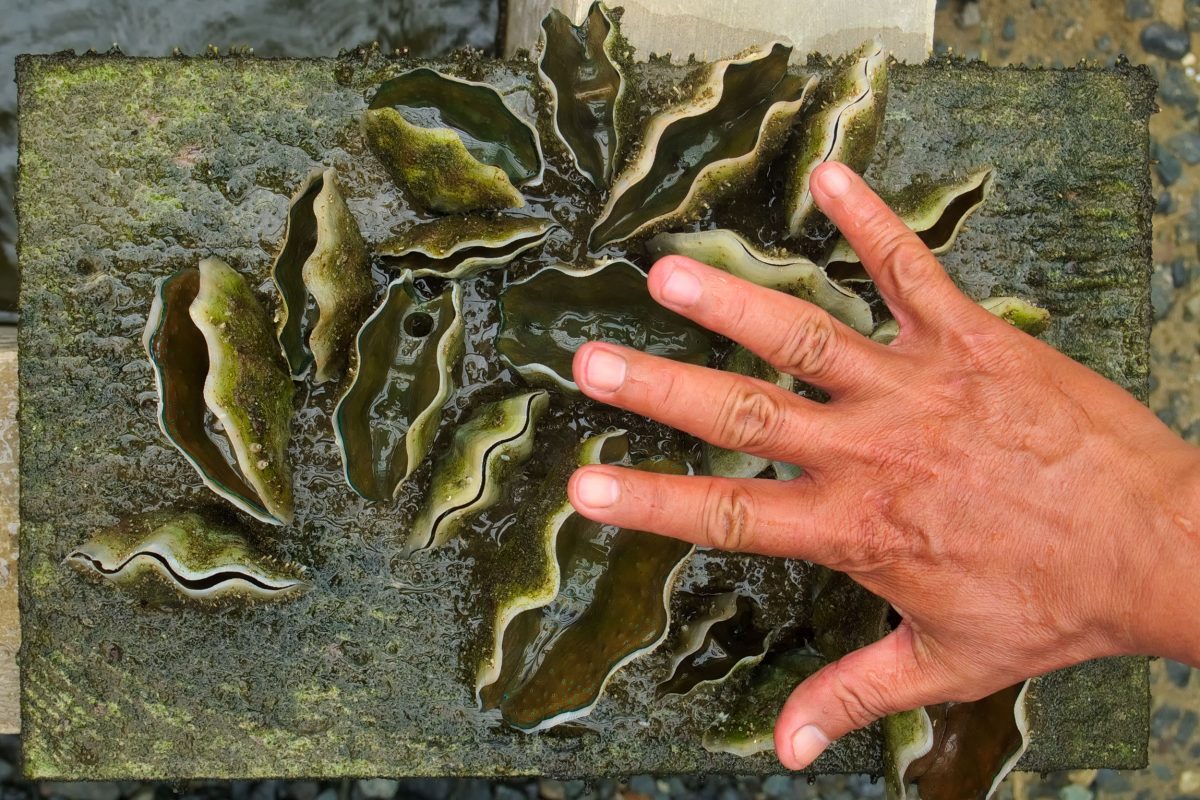 “After the egg and sperm mix in the water column, they fertilize and become swimming larvae,” says Calle, who also helps with the clam breeding at the marine lab. She explains that a larva goes quickly through several stages, as it transitions from floating plankton to tiny clam settled on the seafloor. About 40 hours after hatching, the first signs of a shell appear and after seven days the clam’s foot muscles start to form. The larva then drops out of the water column and sinks to the bottom. By about a year the clams are about ten centimeters long, similar to the ones shown here attached to a tile in the lab. The lab aims to produce 5,000 juvenile giant clams per year. 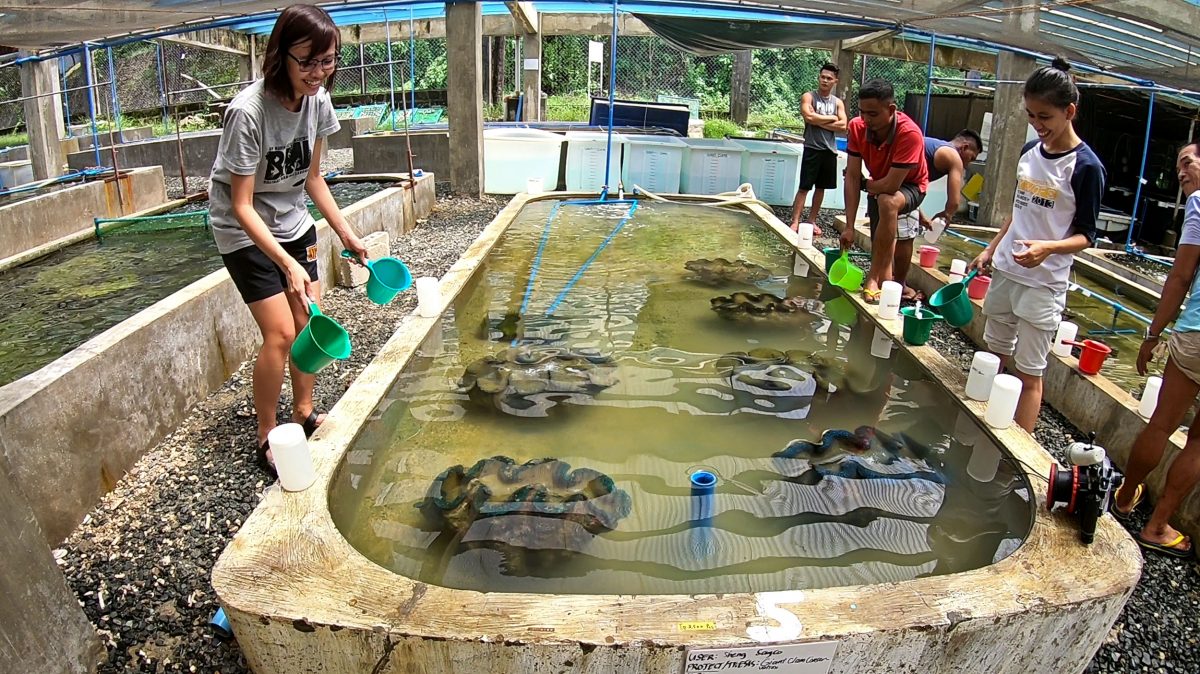 In the marine lab’s hatchery, grad students Aubrey Tejada (far left), Keana Tan (far right), and research assistant Robert Valenzuela (in red shirt) harvest clam gametes. After fertilization, the clam larvae settle on tiles, and grow in tanks for several months. When the clams reach about 15 centimeters, at anywhere between five and eight months, the tiles are relocated to the open ocean nursery. There they are affixed to a wire mesh so they don’t detach in the sea’s surge, and covered in cages that protect them from predators, like triggerfish. Eventually the clams are placed in the sand where they are left to grow to their giant adult sizes. Currently, the University of the Philippines Marine Science Institute grows four species of clams: the true giant clam (T. gigas), the smooth giant clam (T. derasa), the fluted giant clam (T. squamosa), and the bear paw clam (Hippopus hippopus). 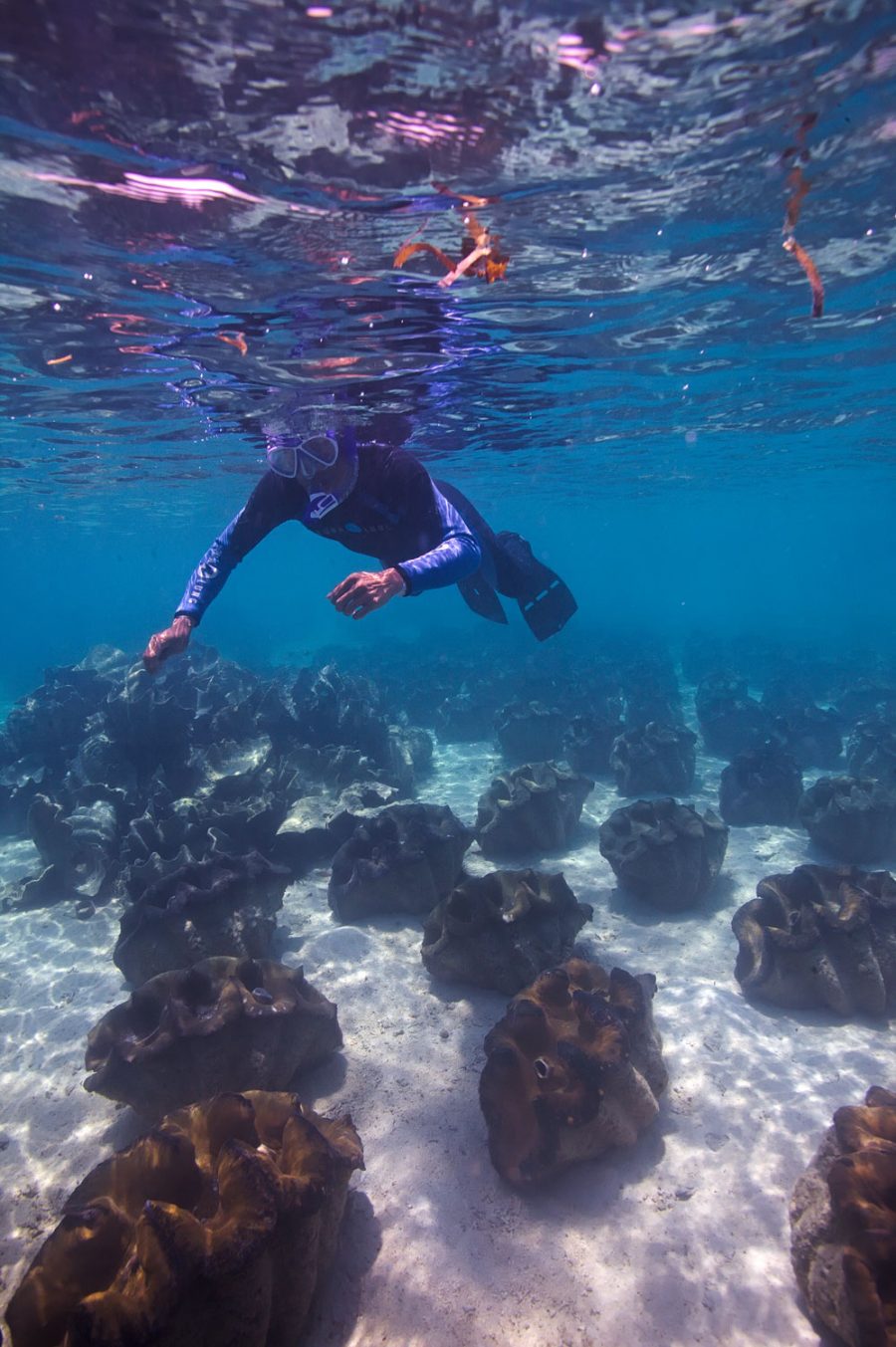 The marine lab’s ocean clam nursery near Bolinao is home to 30,000 giant clams, covering an area of 5.8 hectares, about the size of seven soccer pitches. The long rows of clams are monitored for growth, bleaching, and poaching about once per week. Physical oceanographic parameters such as salinity and temperature are recorded as well. It’s a unique experience to swim within a farm of giant bivalves as populous as a mid-sized town. The rows of clams stretch beyond the edge of underwater visibility. 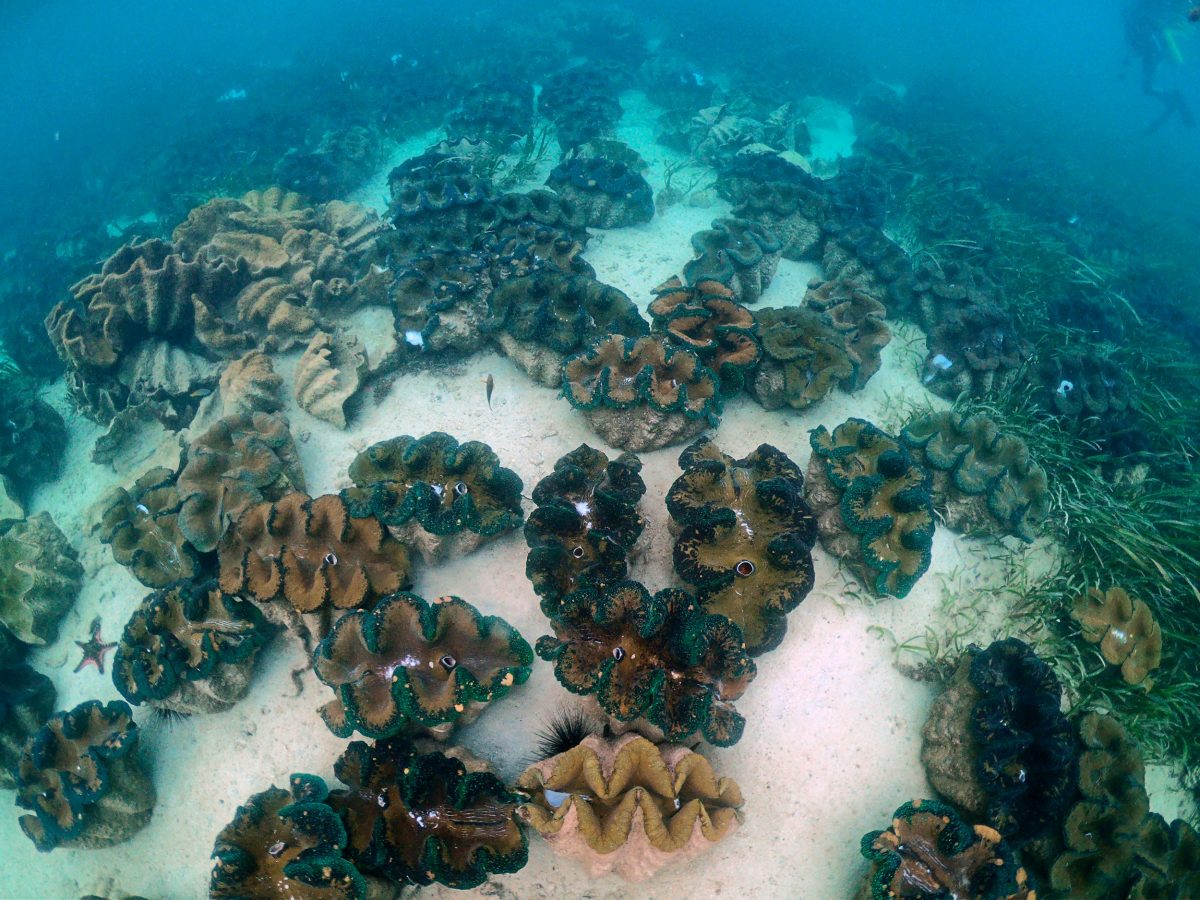 Many of these clams will not spend their long lives in the clam nursery. Instead, they’ll be transferred to new locations throughout the Philippines when they are about the size of a rugby ball. Local populations in many parts of the archipelago have been re-established from the marine lab’s stock and transplanted clams are starting to reproduce on their own. Although the breeding program has saved the population, the nursery-reared giant clams have a lower genetic diversity than the wild populations, which could cause health problems in the long run. Another concern is the increased vulnerability of the clams to parasitic pyramid snails in the monoculture-like conditions of the giant clam nurseries. 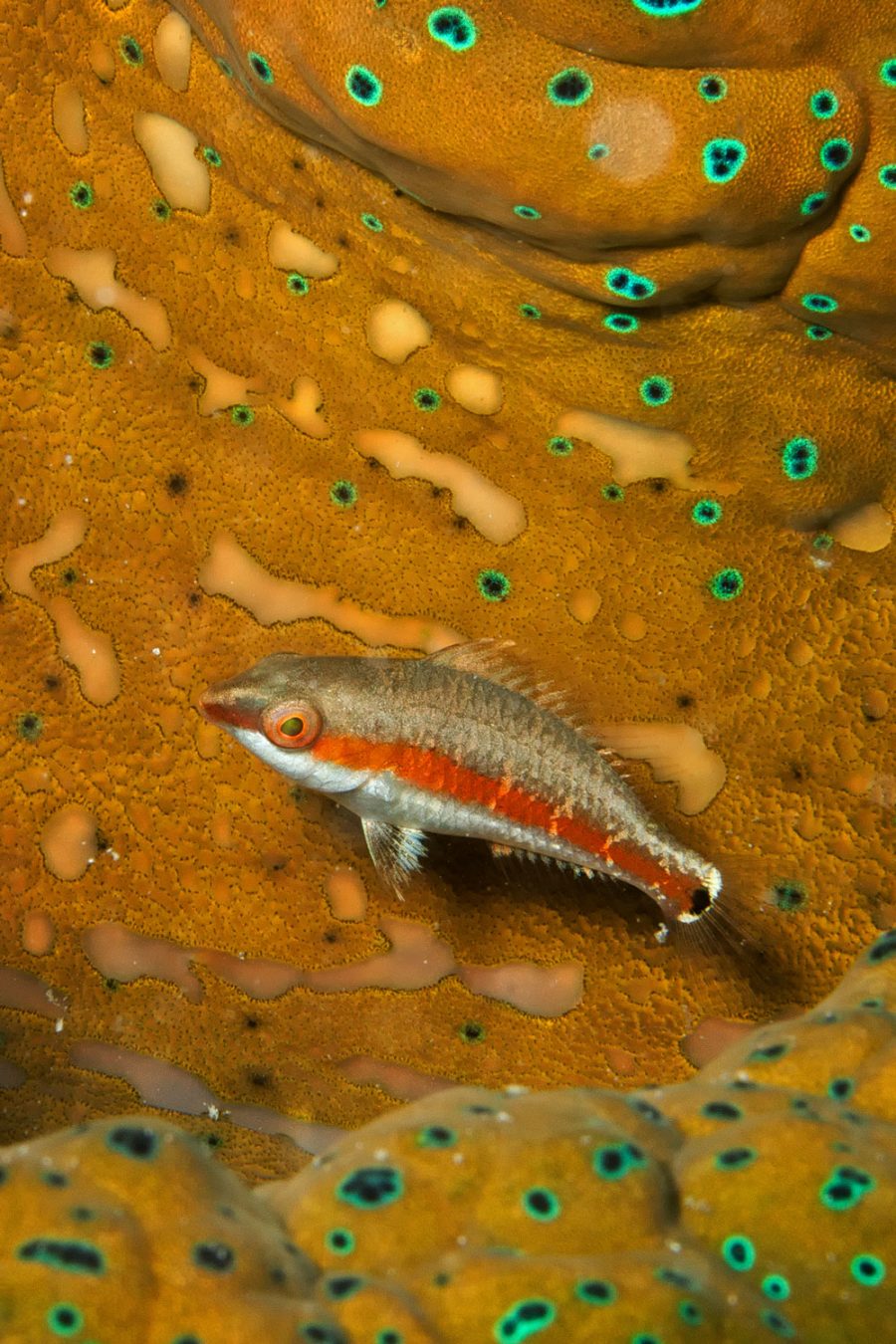 Giant clams provide habitats for myriad creatures on, in, and around their shells. Here a juvenile species of parrotfish hides inside the mantle of a T. gigas. While the parrotfish is a herbivore, other fishes such as pufferfish occasionally nibble on the clam’s mantle. Damselfish like Stegastes and Dischistodus claim patches of nutritious algae growing on the outside of the clams’ shells. The fish defend these patches against intruders, but never completely graze off all of the algae so that it can regrow. The more space a damselfish has for its algal farm, the better off it is. At times, they even trim the edges of the clam’s mantle off the shell to increase the space available for algal farming. 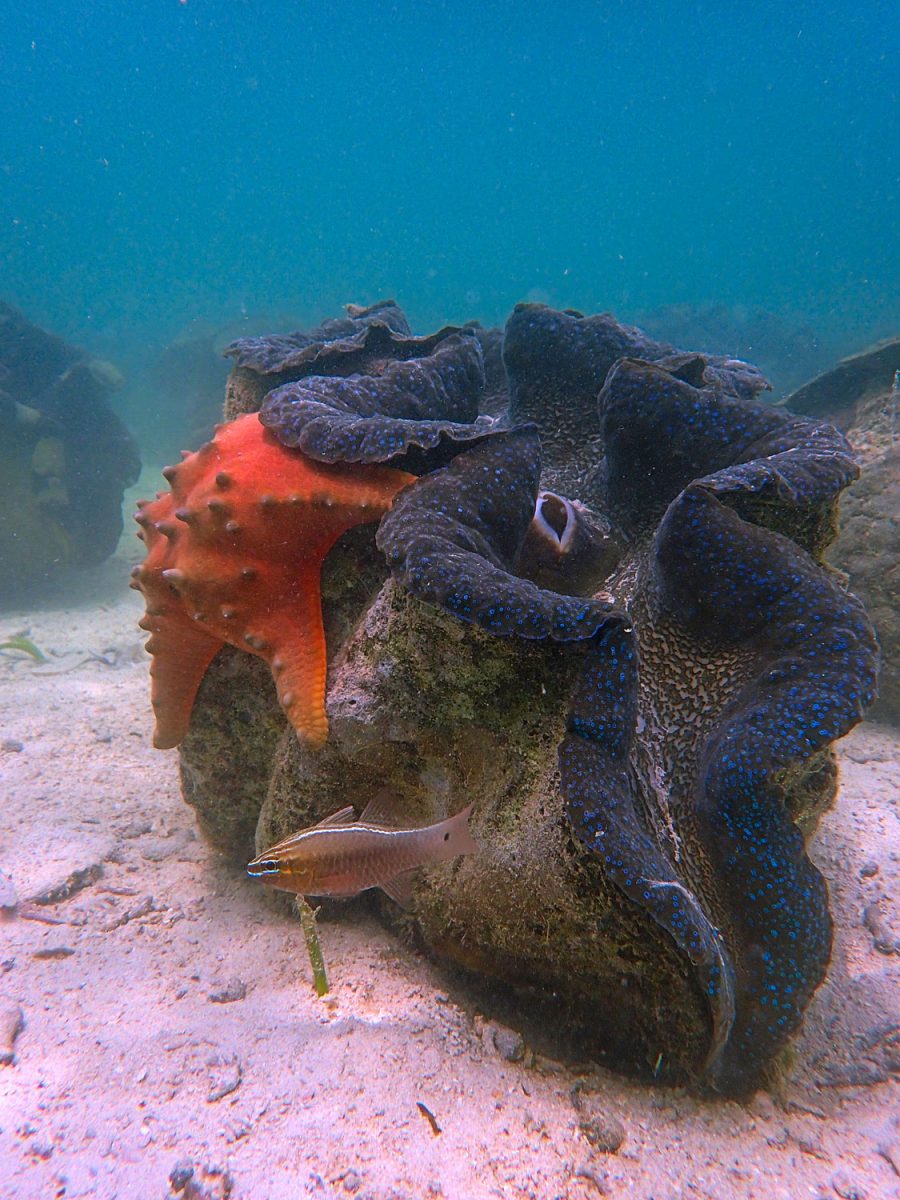 A sea star of the genus Protoreaster climbs onto a giant clam while a type of cardinalfish (Ostorhinchus hartzfeldii) swims past. Like corals, giant clams provide three-dimensional structure as hiding and hunting spaces for a multitude of fishes and invertebrates. The marine lab’s giant clam nursery in Bolinao has developed into a unique shallow-water reef with its own particular assembly of inhabitants. 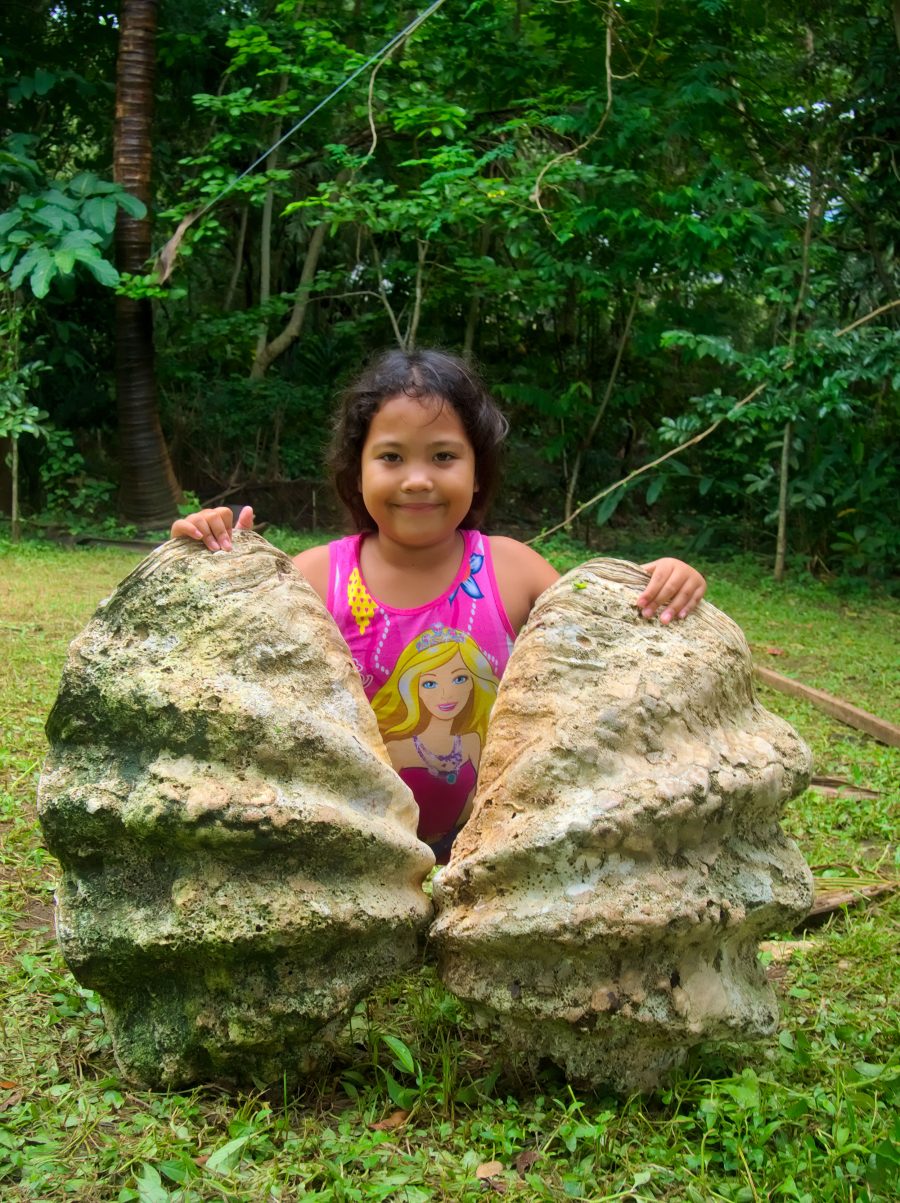 I’ve found that the locals in Bolinao have an ambivalent relationship with the giant clams. A popular restaurant in town is called the Giant Taklobo (taklobo is clam in the Tagalog language)—although, of course, the protected clams are not actually on the menu—and giant clam shells decorate the city hall and the fronts of hotels. The daughter of the marine lab’s security guard proudly poses with a shell in the lab’s garden. This civic pride in the gigantic mollusks does not, however, stop people from poaching these legally protected animals. “Every fiesta [village feast] we lose clams to poaching, about 30 to 40 clams per year,” explains the marine lab’s Jeremiah Requilme. The University of the Philippines has started an adopt-a-clam program, in which donors can support a clam, learn about the team’s efforts by visiting the hatchery and open-ocean clam nursery, and, hopefully, develop an environmental ethic that helps the clams’ future survival.