From a bird’s-eye view, sediment exposed through erosion provides kaleidoscopic color on a beach in South Carolina’s ACE Basin. Photo by Gena Steffens

When I returned to Edisto Island, South Carolina, for the first time in 20 years last summer, I expected to find the beach of my family’s memories—the place where my grandparents kissed as a young couple half a century ago, where my dad taught me how to fish, and where we launched my grandfather’s ashes into the sea on the outgoing tide, just as he had wished.

The beach I stood on seemed foreign, and in fact it was; in the years of my absence, landscape dynamics had eroded and reshaped it beyond recognition.

Coming to this realization was a sobering reminder that coastlines are naturally impermanent. While many geological processes take place over millions of years, coastlines have always evolved within our own short lifetimes.

Edisto Island is part of the ACE Basin, one of the largest undeveloped wetlands on the Atlantic coast, named for the confluence of the Ashepoo, Combahee, and Edisto Rivers. Its coastline is characterized by sea islands, marsh islands, and barrier islands interlaced with estuaries, salt marshes, maritime forest, intertidal areas, and oyster reefs.

An oasis in the middle of a highly developed region, the ACE provides a haven and nesting grounds for endangered sea turtles, as well as migratory birds, alligators, bobcats, and venomous snakes. It also hosts a wildly productive aquatic food web. The Nature Conservancy considers the ACE one of the “last great places on Earth.” But great swaths are undergoing drastic changes, and we may be among the last generations to enjoy many of the ACE’s beaches before they shapeshift beyond recognition.

“We’ve got estimates for erosion rates being as high as about 7.6 meters per year in some areas,” says coastal geologist Katie Luciano of the South Carolina Department of Natural Resources (SCDNR), who uses historical imagery and a statistical program to study the ACE’s transformations. Compared to the average rate of half a meter to just under a meter of erosion per year along the rest of the Atlantic coast, it’s no wonder the beach of my childhood memories was unrecognizable. 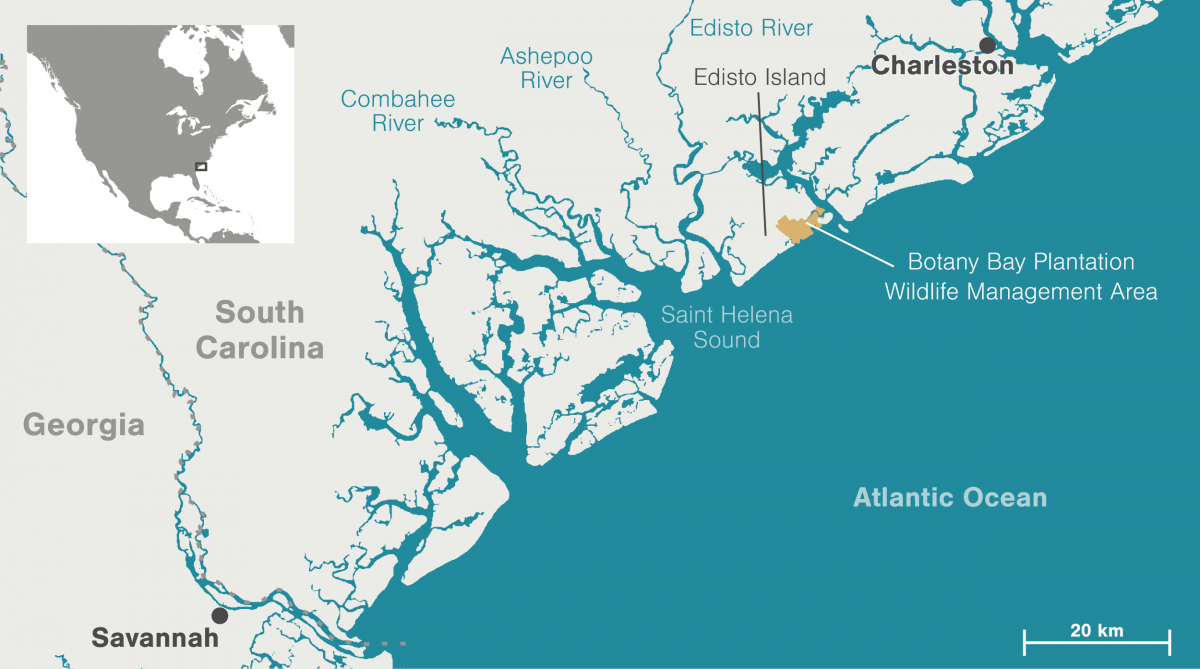 David Bishop, coastal and midlands conservation director of the Nature Conservancy, a key partner in the mosaic of publicly and privately owned properties that protect the ACE Basin, worries that the pace has become unnatural. “The water is rising. Our coastal communities are flooding more frequently. Forests are transitioning to wetlands. Wetlands are transitioning to open water,” he says.

Yet Luciano has found no proof that the changes have sped up. She notes that at least one island has evolved at a steady pace since the 1500s. With our tendency for nearsightedness, people only started taking note of the shoreline shifts after inhabiting the area.

Within my own small frame of reference, the changes felt drastic. Standing ankle-deep in the ocean as high tide waters lapped at the steps of the old house we rented year after year, I wondered where the gently sloping stretch of sand featured in so many family photos had gone.

If such a noticeable change had occurred in 20 years—a geological blink of an eye—what will the coastal ACE Basin of the future look like? According to Luciano, it’s hard to tell. The core area, which at 1,400 square kilometers is more than double the size of the Caribbean island of Saint Lucia, comprises land managed by conservation groups, state agencies, private landowners, and a smattering of mostly rural communities, all with their own approaches to addressing erosion. On gently developed shorelines like Edisto Beach, at the southern tip of Edisto Island, communities will continue to fight a losing battle through artificial beach renourishment in attempts to save their homes. But on “wild” beaches like those of the Botany Bay Plantation Wildlife Management Area on eastern Edisto Island, nature will be allowed to take its course, and unless the dynamics reshaping the coast recalibrate, the beaches of our memories will disappear entirely.

While I’d much prefer that this iconic region remained exactly as it was in my youth, to Luciano, the ACE Basin is fascinating because “it is one of the few places along the coastline where you can really see coastal geology in action.”

Here’s a glimpse of the ACE Basin’s fleeting coastal landscapes and the forces of nature that shape them, seen from above. 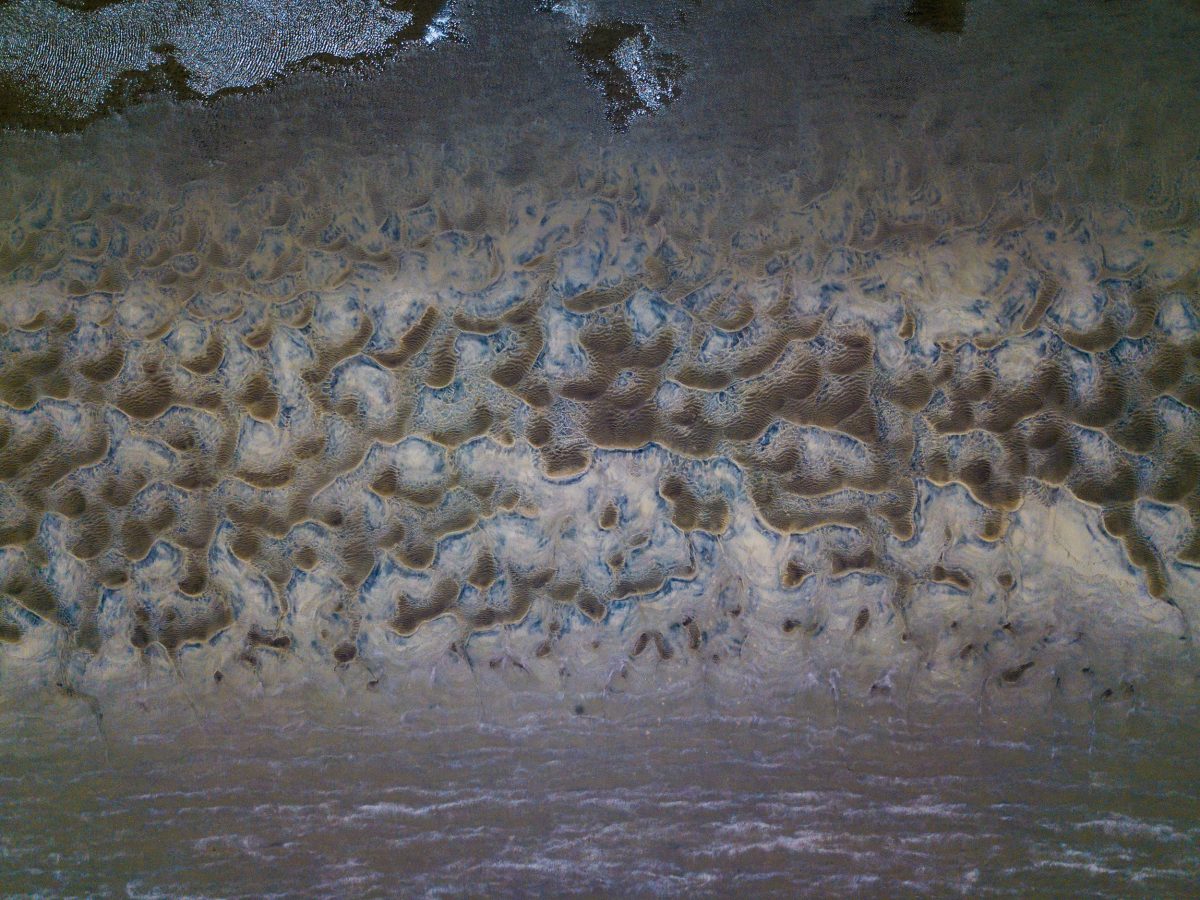 The ACE Basin’s rivers drain into Saint Helena Sound, delivering sediment that settles into the shoals and sandbars of an extensive delta, visible here along Otter Island at low tide. The island itself lies beyond the top of the frame.

The complex sediment patterns, known as bedforms, can change size and shape on a daily basis in response to currents, tides, and environmental conditions. To the trained eye, they are indicators of how sediment is being distributed throughout the coastal region. The type of pattern shown here tends to form in shallow water moving at a high velocity. 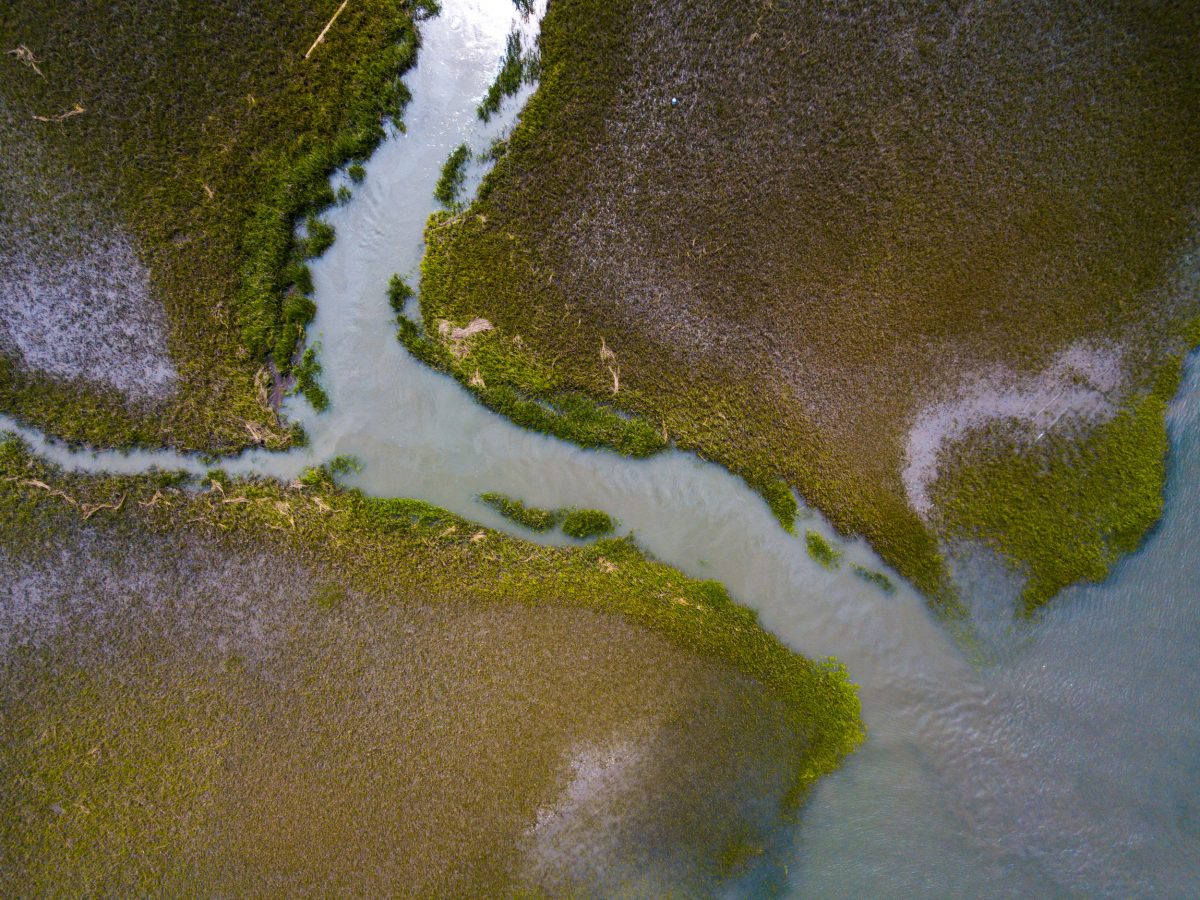 Beaches are formed and constantly reshaped by a process known as longshore transport—sand and sediment are carried downstream by rivers like Mud Creek, shown here, and then gradually shifted south along the coast.

When something blocks that flow of sediment—whether it’s related to human interference, a natural occurrence, or both—it can starve beaches of sand and quicken the rate of erosion. In the 1890s, for example, a natural shift in the channel of the North Edisto River diverted sediment traveling along the coast. Instead of naturally renourishing the sand-starved barrier island at the Botany Bay preserve, sand started accumulating in an area now called Deveaux Bank. 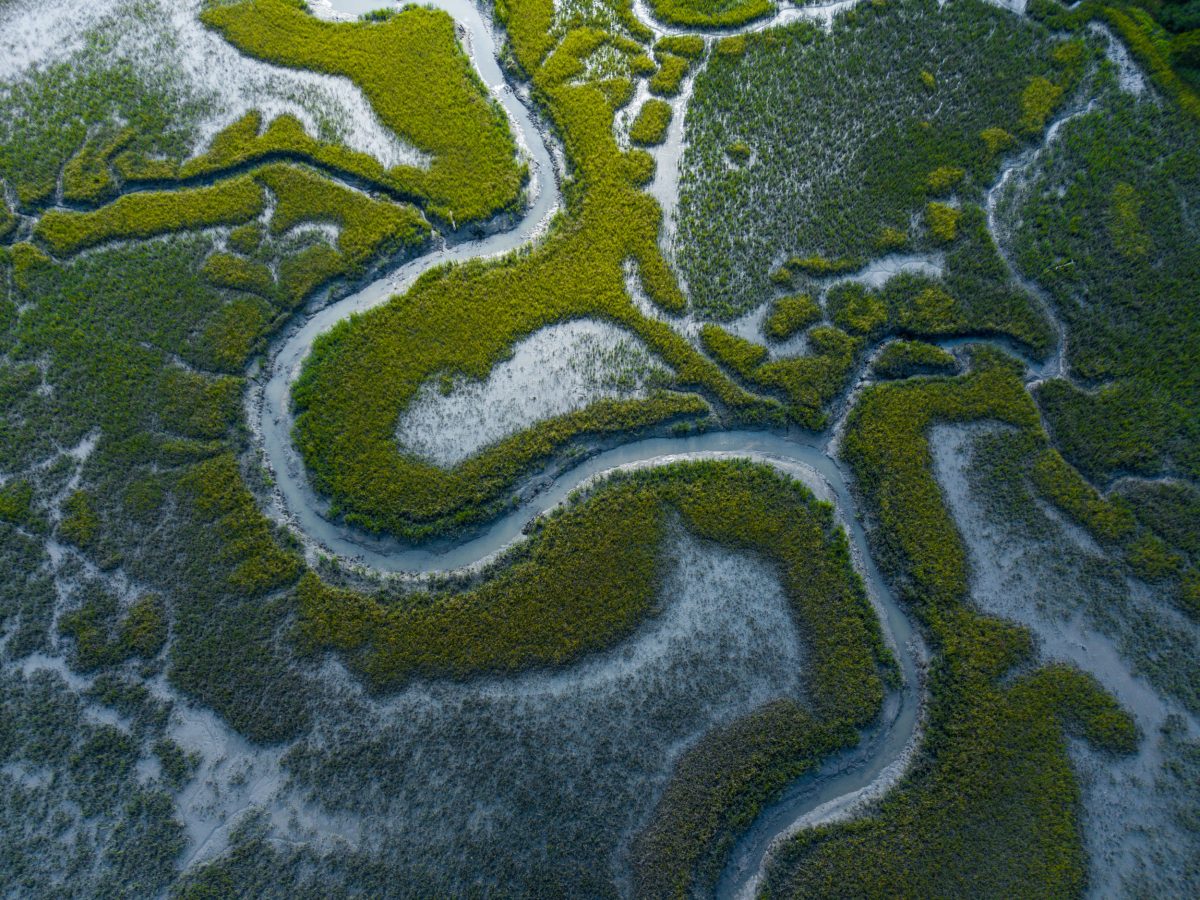 Built-up sediment is eventually transformed into salt marsh, as shown here. These marshes are the primary sites of production in the estuary, benefitting from the life-boosting nutrients of freshwater streams and the ocean swirling together. Specialized plant species like smooth cordgrass flourish here, further stabilizing sediment and providing a valuable food source that supports nurseries of commercial and recreational seafood species like shrimp and oysters.

According to David Bishop, South Carolina has more salt marsh than any other Atlantic state, and much of it is in the ACE Basin. Recent studies have confirmed that salt marshes play a critical role in protecting shorelines from damage caused by storms and waves—a service that will become increasingly important as climate change amplifies storms.

As sea levels rise, both salt marshes and beaches require space to move inland. That natural process is impeded when artificial structures like houses, roads, and sea walls block the way. This is why conservation areas like the ACE Basin are so important—they give ecosystems and the organisms that inhabit them space to migrate naturally in response to the constantly shifting coastal landscape. 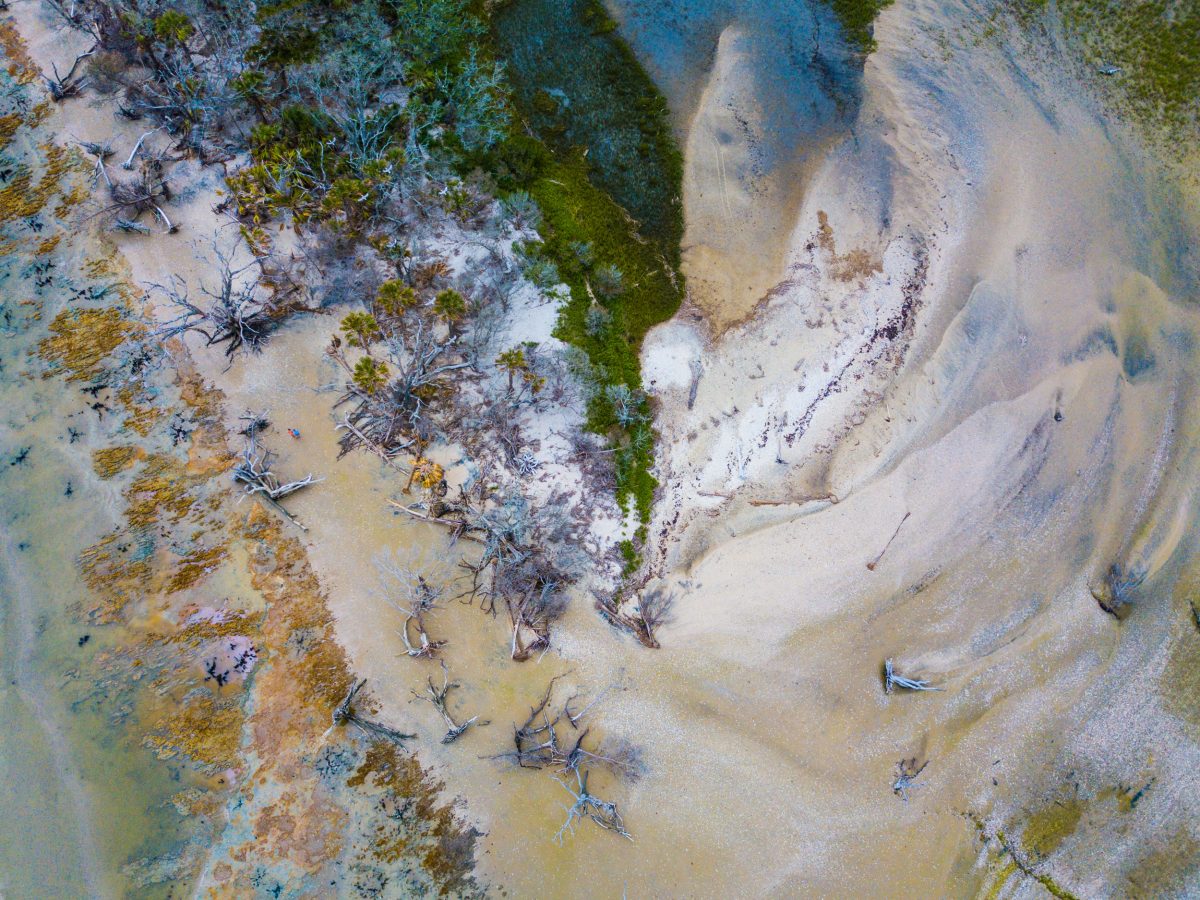 Hurricanes have the power to transform coastal landscapes and even disrupt localized geological processes in a matter of hours.

Bess Kellett, SCDNR volunteer coordinator for the Botany Bay preserve in the southeastern ACE Basin, has spent the past 10 years observing the daily changes taking place on this beach, including the overwhelming aftermath of recent hurricanes. The storms ripped sand away and forced it into the forest and marsh beyond, exposing otherworldly colors in the process. Since 2015, Kellett estimates, more than 45 meters of the beach—one of the last remaining undeveloped beaches in South Carolina—has been lost to hurricanes.

“All the trees that are sitting on the beach today, a lot of them were sitting in the forest last year,” she says wistfully. “Lord, I’m knocking on wood we don’t have any hurricanes for a while, or we’ll be in trouble.” Kellett isn’t just referring to the loss of one of the South’s most beloved landscapes—the continued degradation of the last remaining patches of maritime forest will also negatively impact the diverse communities of birds, reptiles, and amphibians that call them home. 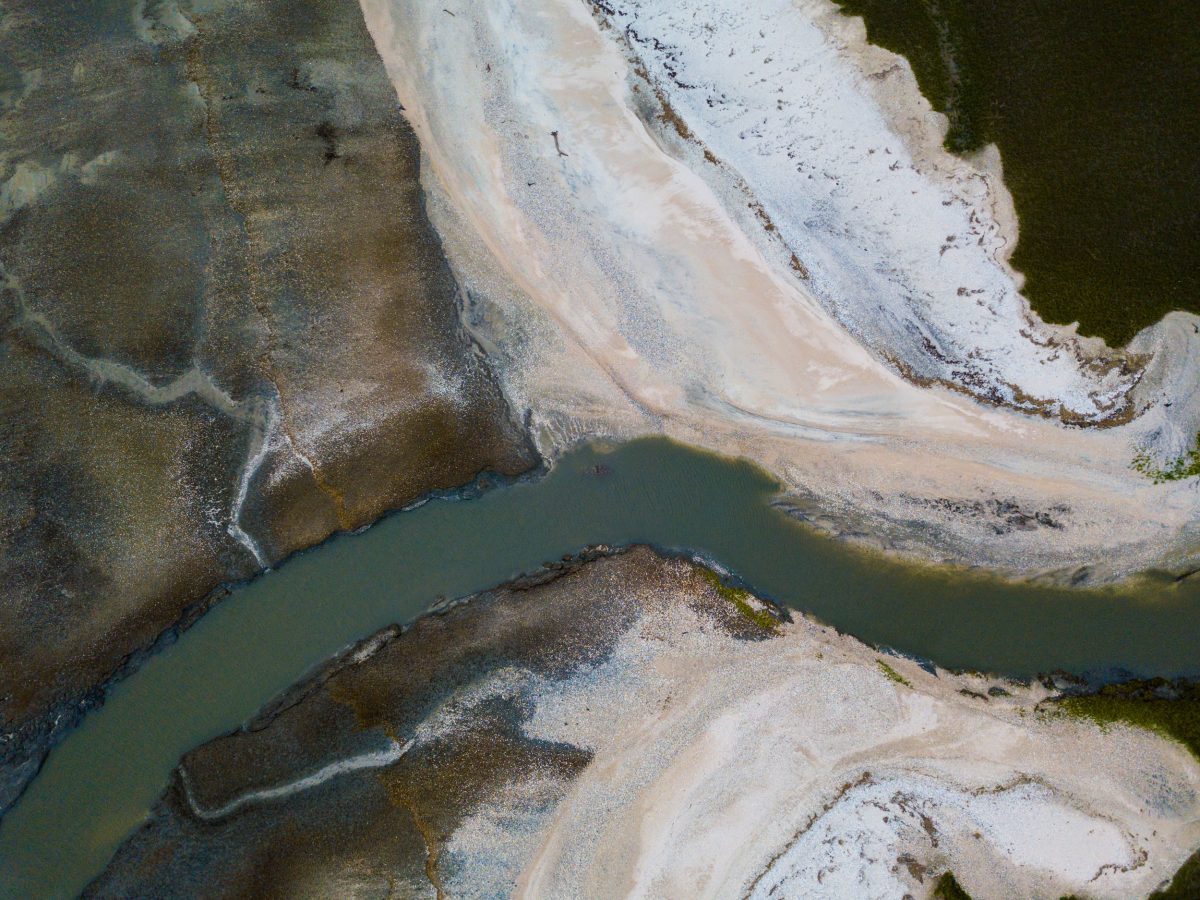 This inlet south of the Botany Bay preserve’s beachfront used to be a bend in a winding salt marsh creek before two consecutive storms (Hurricane Matthew in 2016 and Hurricane Irma in 2017) forced the beach—which used to lie some 45 meters to the left of this photograph—inland onto the marsh. Thin veins of the marsh’s drainage system cutting through the dark estuarine mud are still visible in the left side of the photograph. 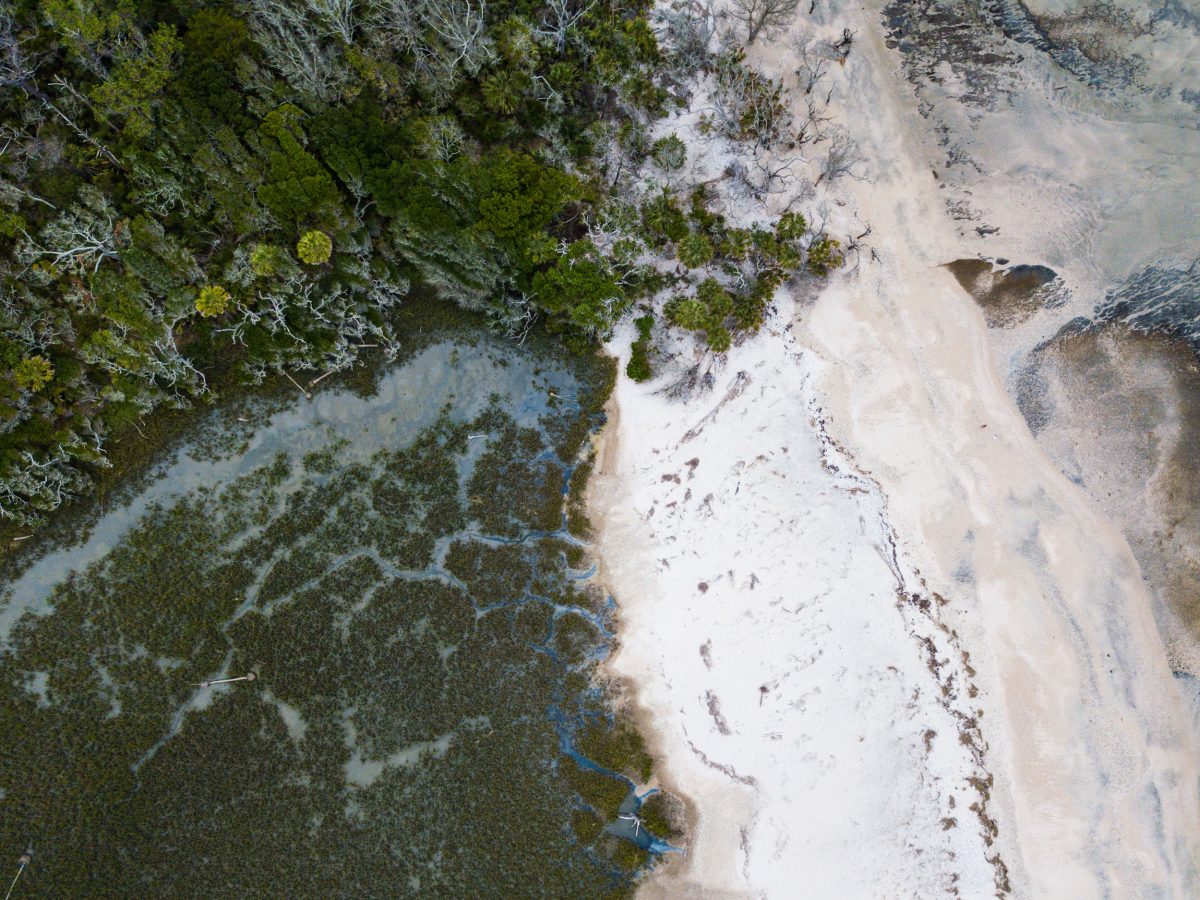 Another reason certain ACE Basin beaches are eroding so quickly is that they lack sand dunes. Dunes serve as barriers that shield a beach from storm waves and protect the ecosystems behind them. Without dunes—or hard human-constructed structures—to block the sand on the island shown here, it gets swept into the forest and vegetation beyond. 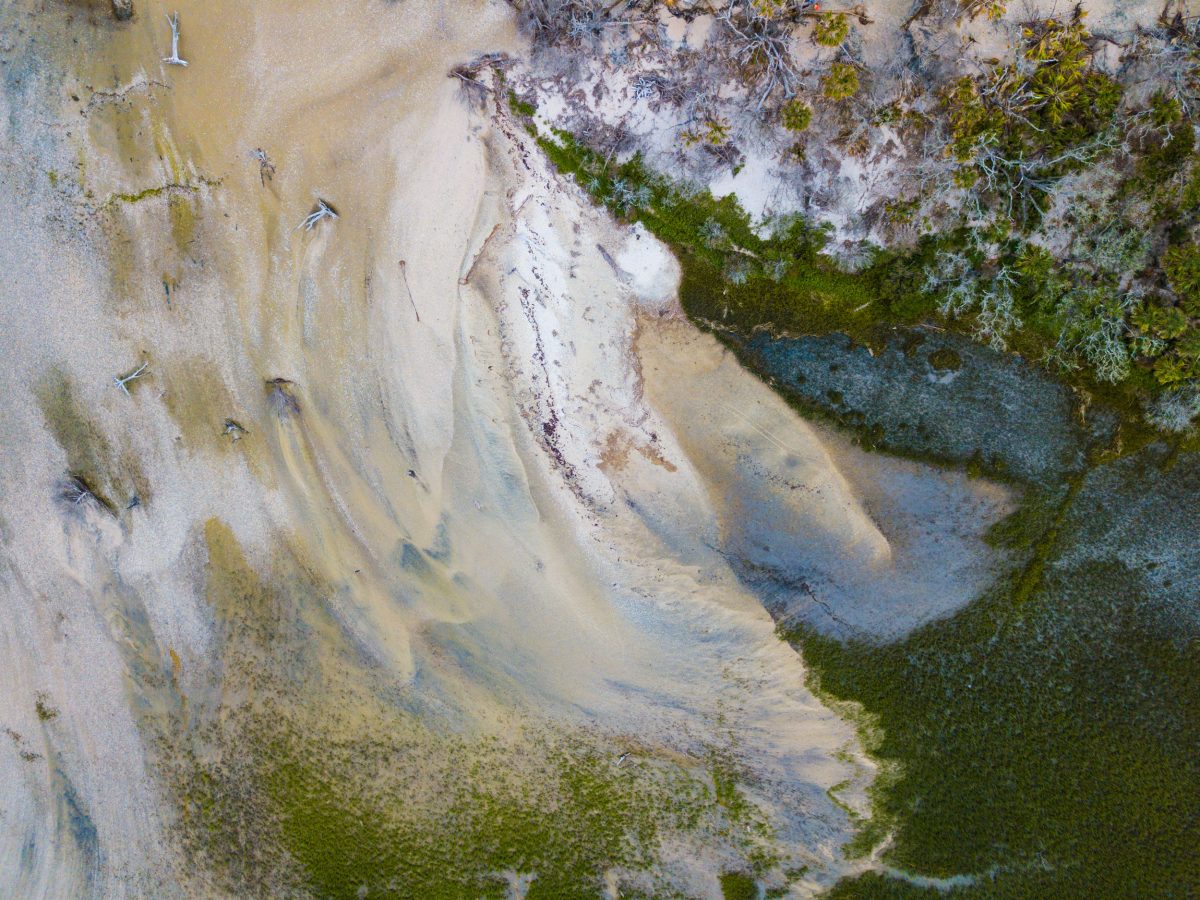 What will happen to beaches like the one at Botany Bay in the future?

According to Luciano, if nothing changes in the way that longshore transport distributes sand to the ACE Basin’s coastline, the shores of the Botany Bay preserve will continue eroding. The shoreline will continue to move landward, and waves from storms and rising seas will scatter sand over inland marshes, creating “washovers” like the one shown here. 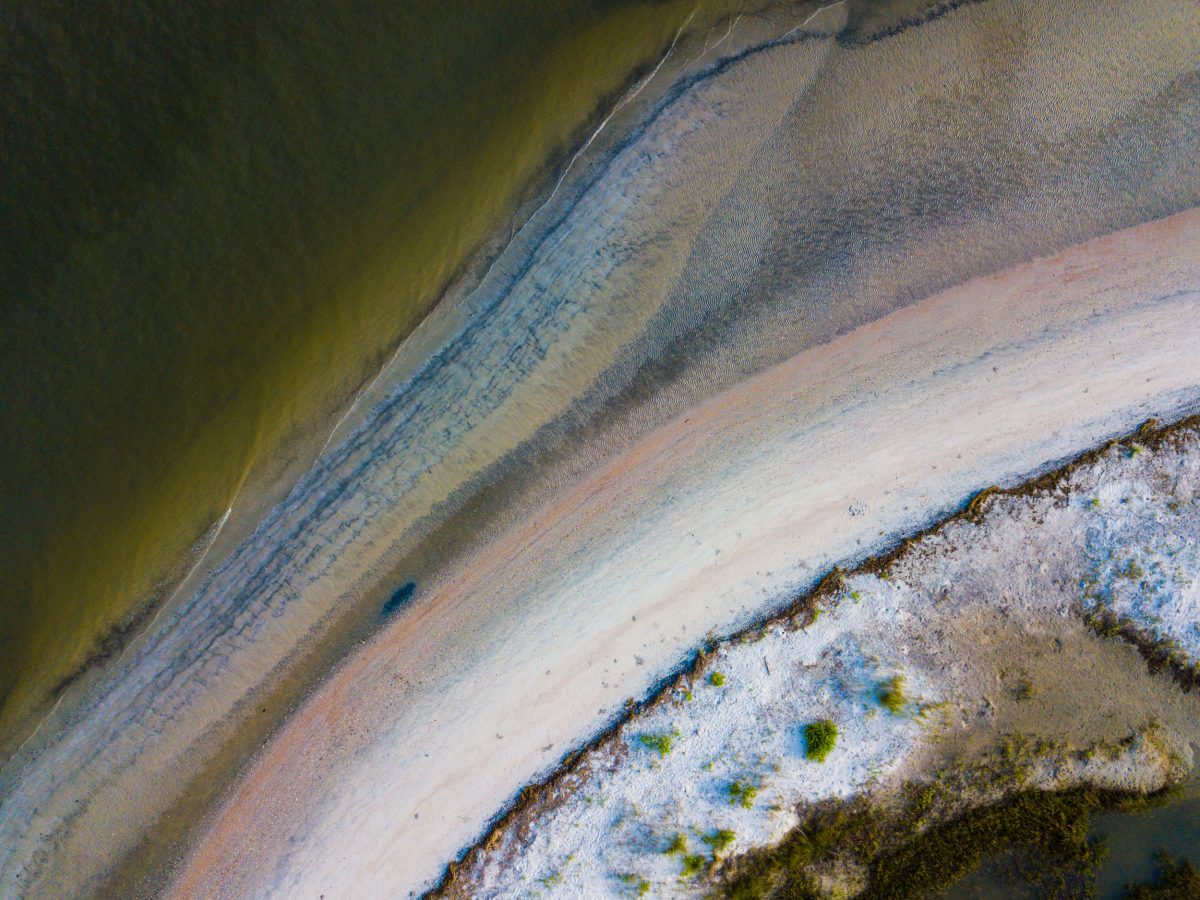 The dark and colored bands of sediment shown here off the tip of Edisto Beach, where entire generations of my family learned to fish, are thought to be heavy minerals winnowing out of material brought from offshore bodies of sand. The sand was moved here during recent beach renourishment projects by the mayor and councilors in the town of Edisto Beach, one of fewer than 10 small settlements within the greater ACE Basin area. 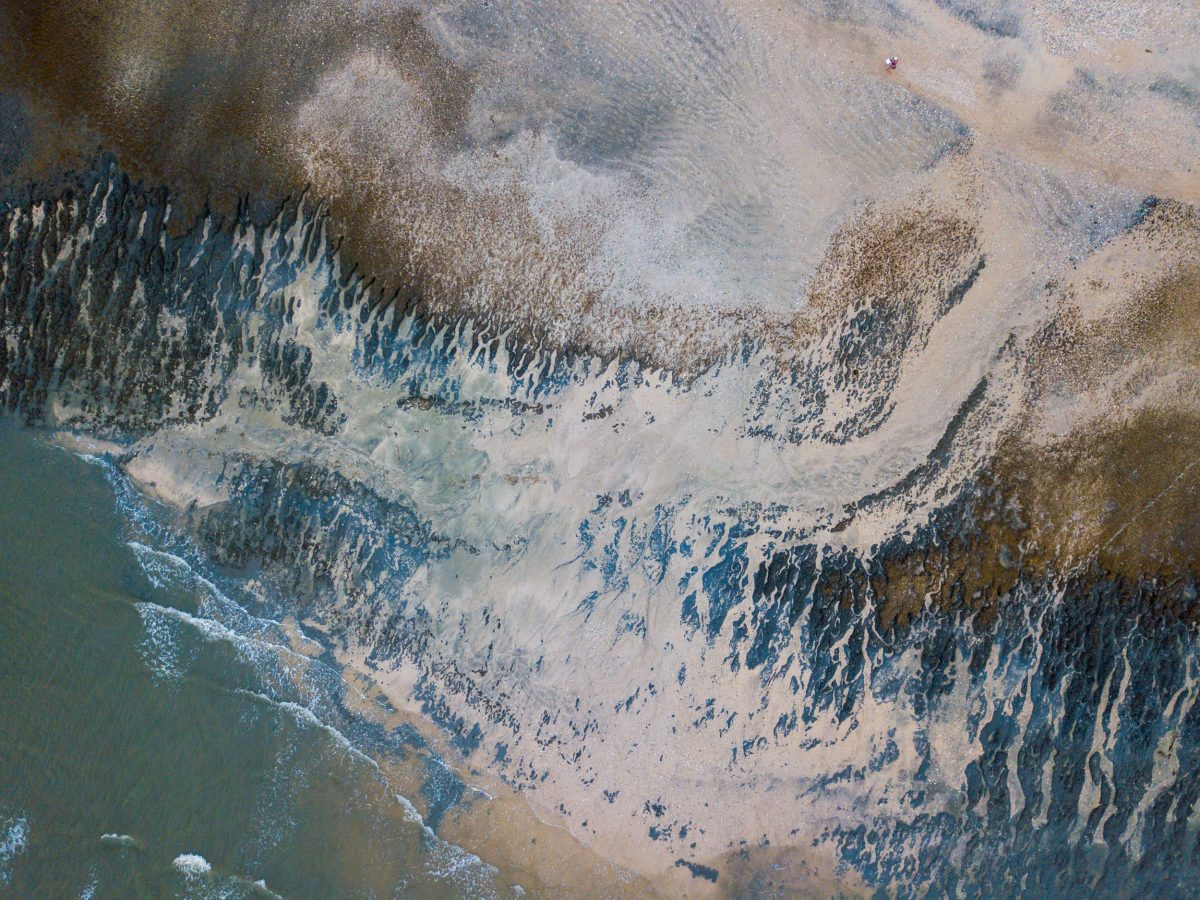 According to Michelle Pate, coordinator of SCDNR’s Marine Turtle Conservation Program, undeveloped shorelines like those of the barrier island at Botany Bay are essential for species such as sea turtles and shorebirds.

“Barrier islands, where turtles typically nest, are dynamic and constantly evolving,” she explains. Other barrier islands in the United States have become victims of “coastal squeeze,” the phenomenon of intertidal habitats becoming trapped between rising sea levels and hard, manufactured structures that prevent their natural landward migration. “With nowhere for the sand to move, the beach becomes smaller and smaller and less dry and less habitable for nesting,” she says. 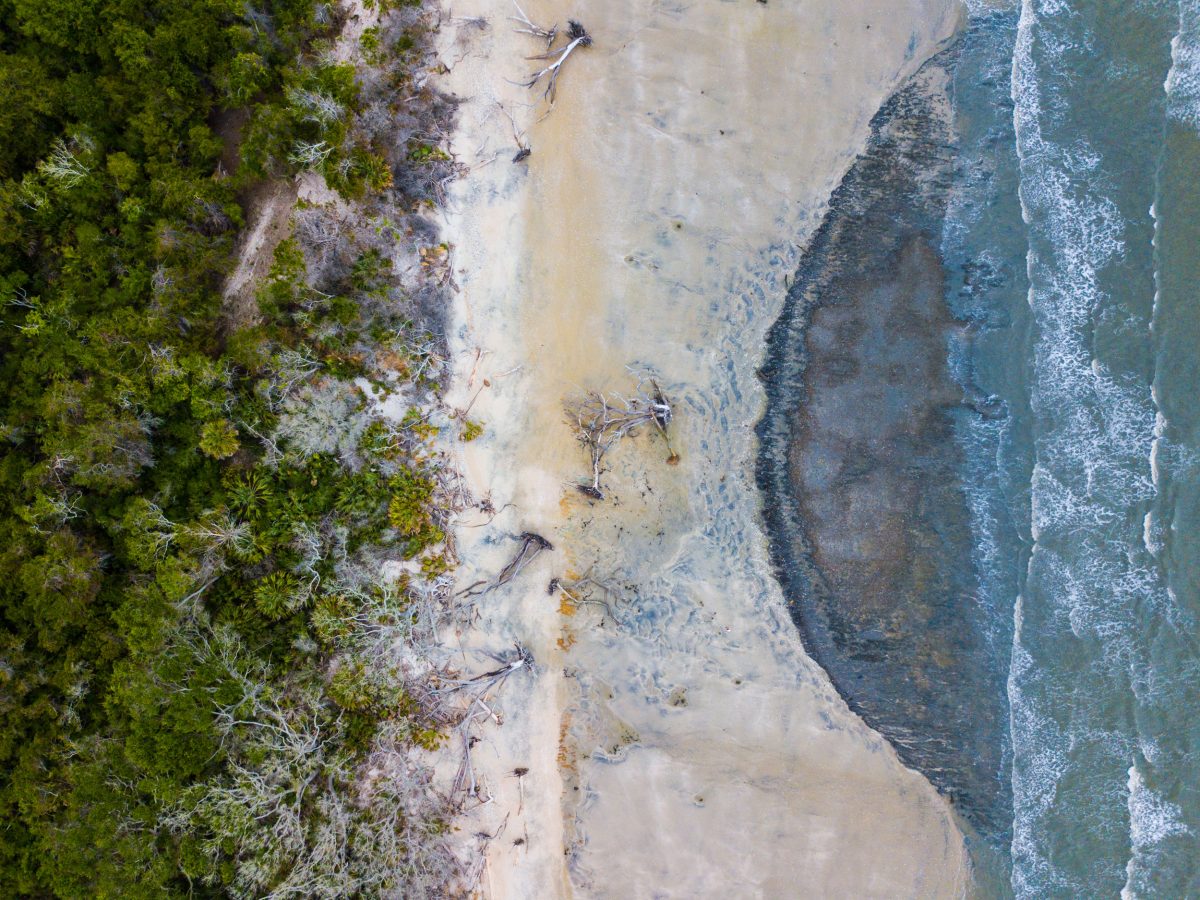 Sea turtles are only one species threatened by erosion and rising sea levels. The ACE Basin is also home to maritime forest—an increasingly rare ecosystem that has been largely cleared for development along the rest of the Atlantic coast. These forests are home to mostly oak trees and evergreen species with constantly shedding leaves and needles that provide a source of nutrients for the sandy soils on which they grow.

Throughout the ACE Basin, patches of maritime forest are typically perched atop beach ridges formed through wave action and other natural processes over thousands of years. The slight increase in elevation allows the trees to establish roots. 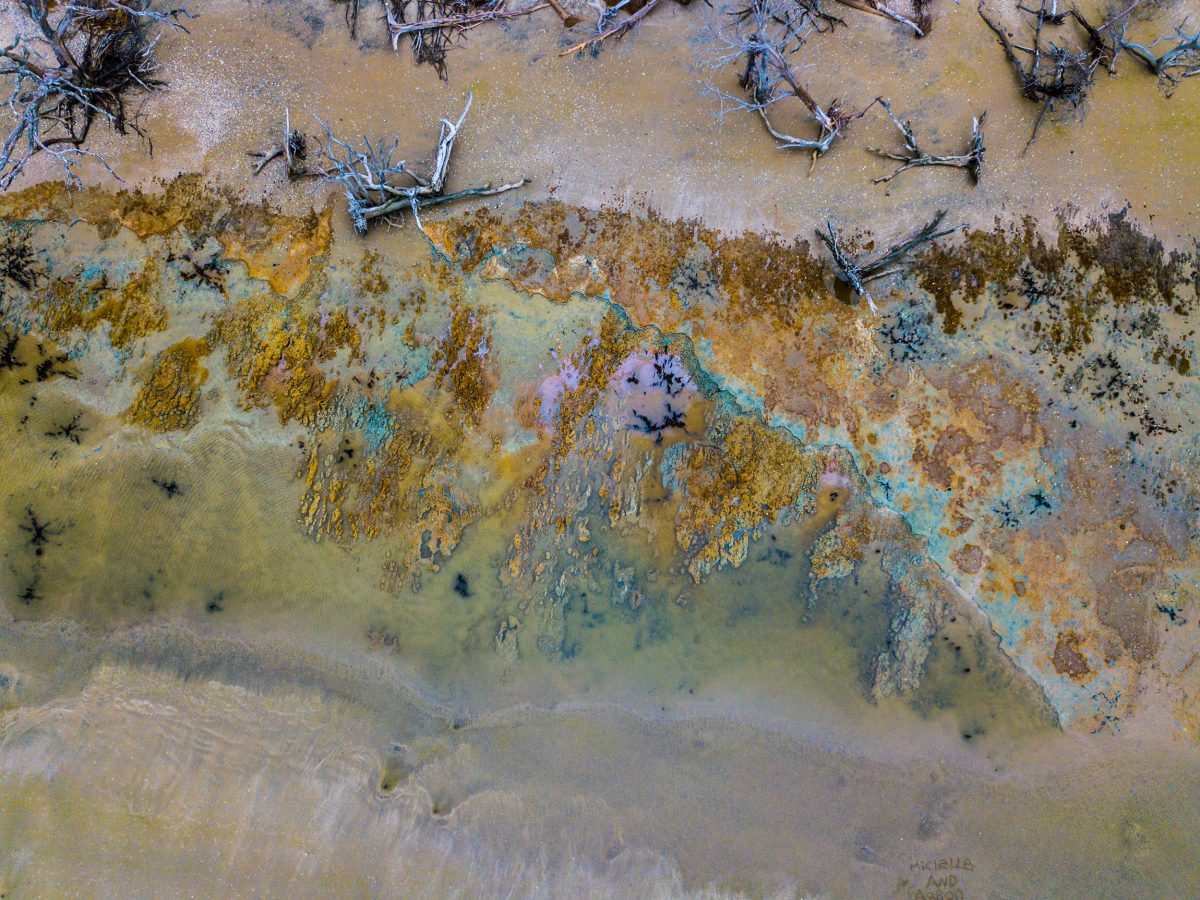 The shoreline at Botany Bay has eroded so severely that it has exposed fresh groundwater and long-hidden sediment likely full of iron-rich minerals.

The combination of oxygen, fresh water, and iron-rich minerals has created a peculiar-looking environment where a class of iron-oxidizing bacteria appears to be thriving.

These bacteria, which are harmless to humans, fulfill their energy requirements by synthesizing ferrous iron into ferric iron. When they do that, the iron precipitates out, creating a rust-colored deposit. A purple sheen and bluish tones appear when the bacteria begin to decompose. 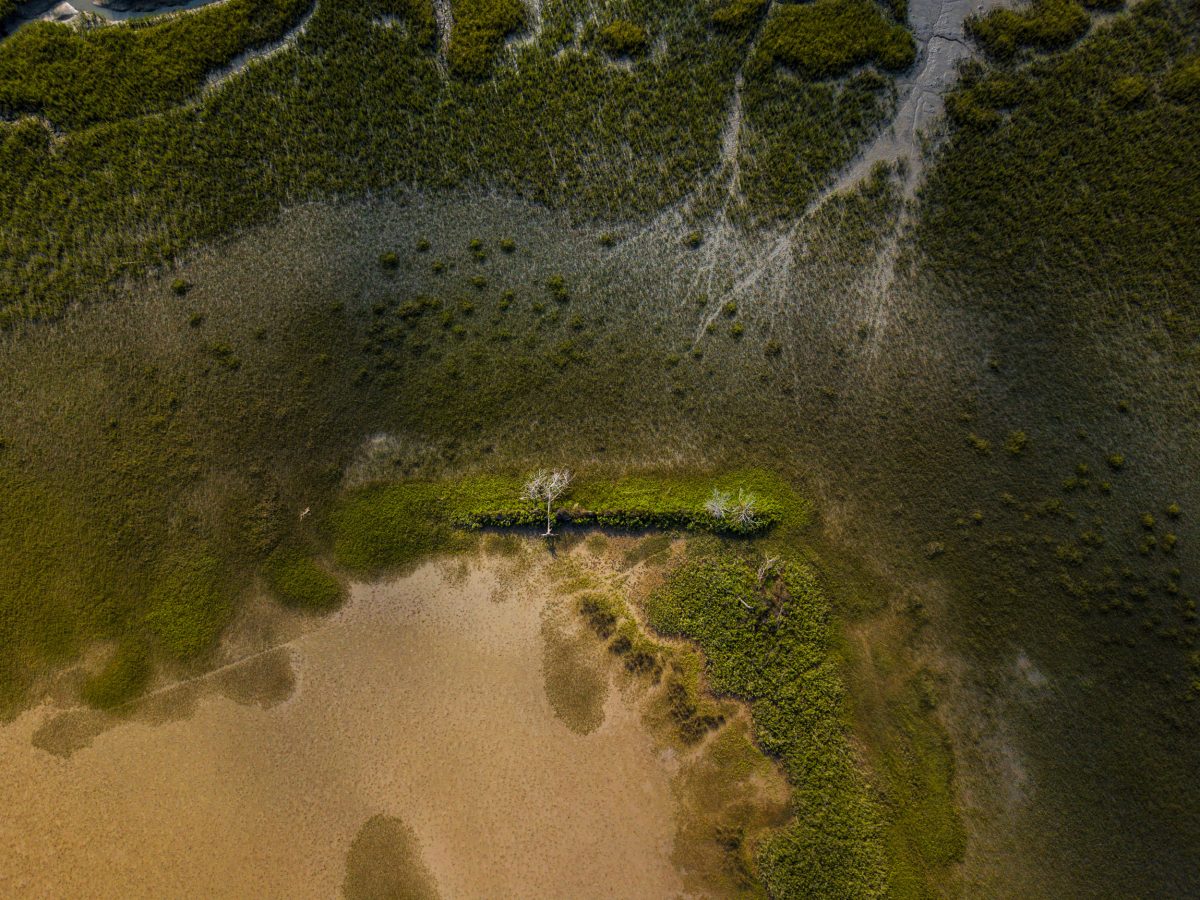 Though coastal erosion is a natural process, human activities are speeding up the rate at which we’re losing the ecosystems we love and depend on.

“We know our coastal areas are going to change,” says David Bishop. In the ACE Basin, conservationists have at least preserved the stage upon which these changes will occur.

As our beaches shift and transform, we must follow suit, adapting our behaviors in ways that are compatible with our dynamic, living planet. The same forces that created the unique coastal landscapes ingrained in my identity will eventually erase and replace them with new bends in the rivers, new nesting grounds, new islands, and new places to form memories.