This purple top snail is badass. Gaze at its beauty then check out its backboneless friends below. Photo by Mandy Bemis

Congratulations to Josh Silberg and Adrienne Mason on winning a Canadian Online Publishing Award for this article.

Colorful marine life isn’t found only in tropical coral reefs. The rocky reefs, kelp forests, and tide pools of the cold northeast Pacific are rich with a stunning array of marine life, and this summer a quirky and colorful cast of scientists gathered at the Hakai Institute’s Calvert Island Ecological Observatory for the Hakai Institute-MarineGEO bioblitz.

Together, the 40 scientists from four countries made 225 sampling trips to a variety of habitats and collected over 3,500 samples of marine invertebrates (covering approximately 1,300 species).

The endeavor builds on previous collection and identification efforts in British Columbia as biologists strive to better understand the province’s biodiversity along its 27,000-kilometer coastline.

Each night during the event, “bioblitzers” took a break to choose their species of the day. Heated debates ensued, but here we share a few of the favorites. 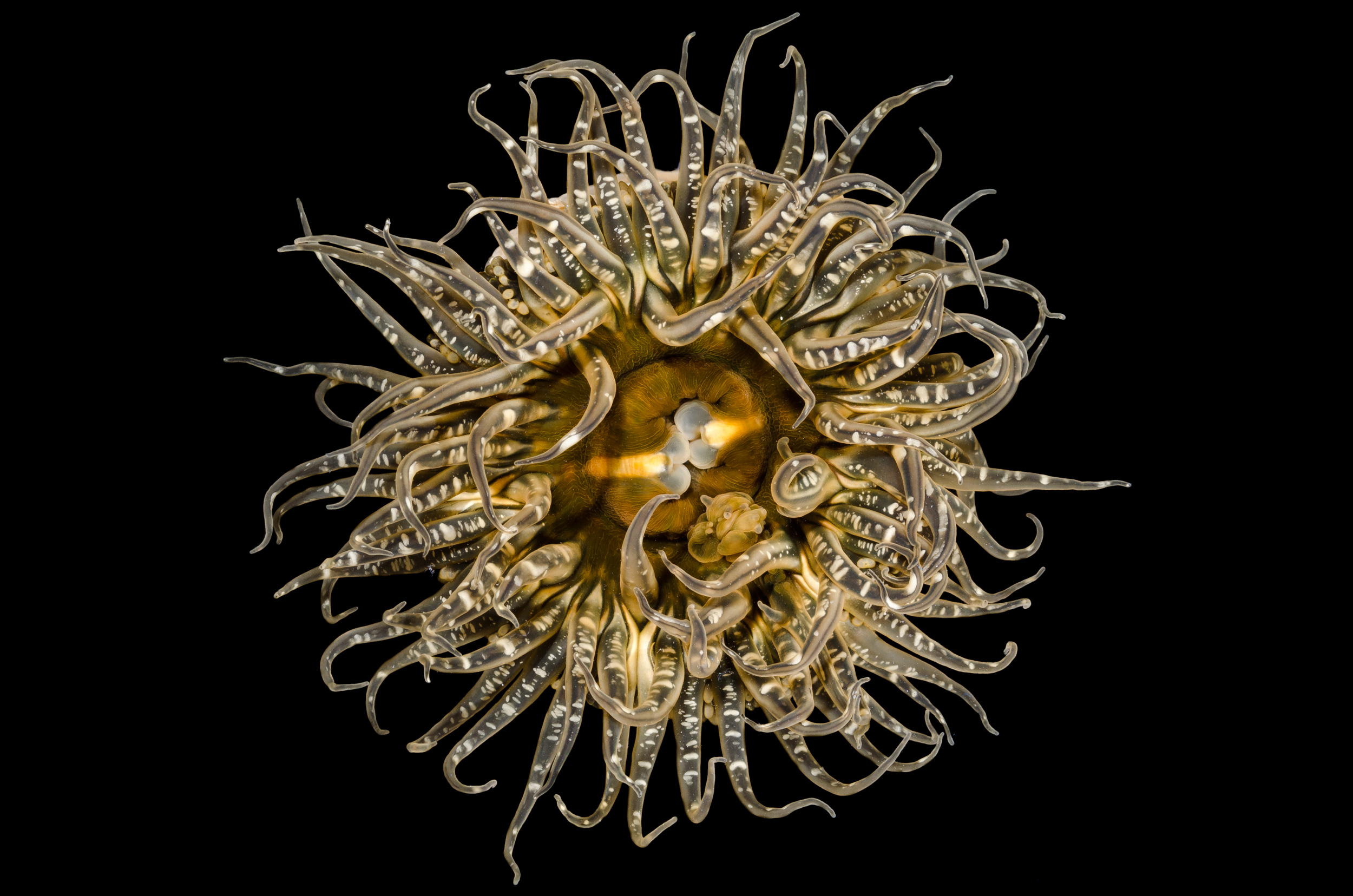 This burrowing anemone is a close cousin of the two common green anemones often seen in tide pools on the British Columbia coast. As its name suggests, this anemone is usually found buried in the sand with only its tentacles showing. Photo by Josh Silberg 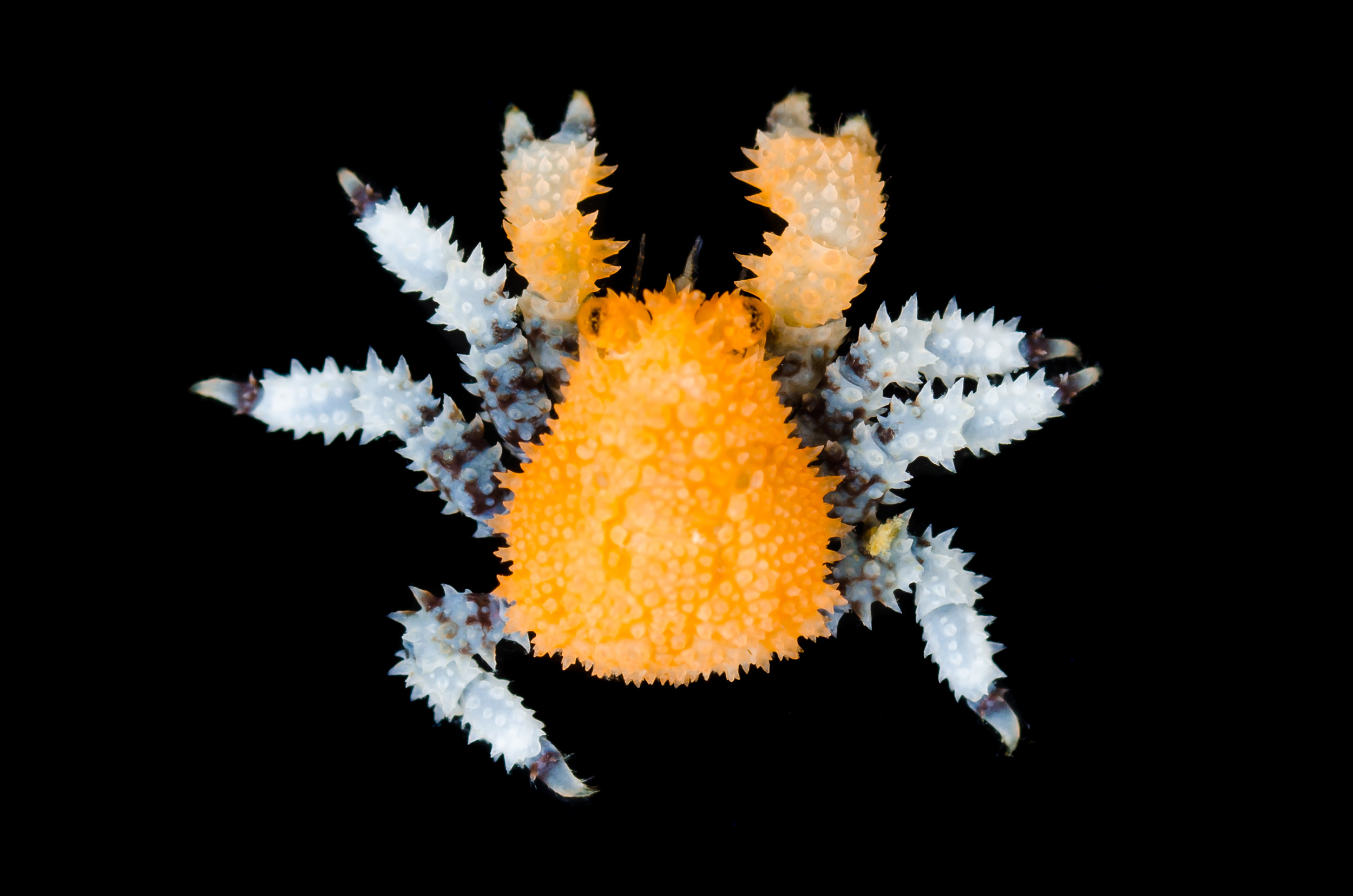 A baby heart crab, no larger than the nail on a pinkie finger, shows off its vibrant juvenile colors. As the crab grows, its shell becomes more mottled and a set of raised bumps forms a recognizable heart shape on its back. Photo by Mandy Bemis 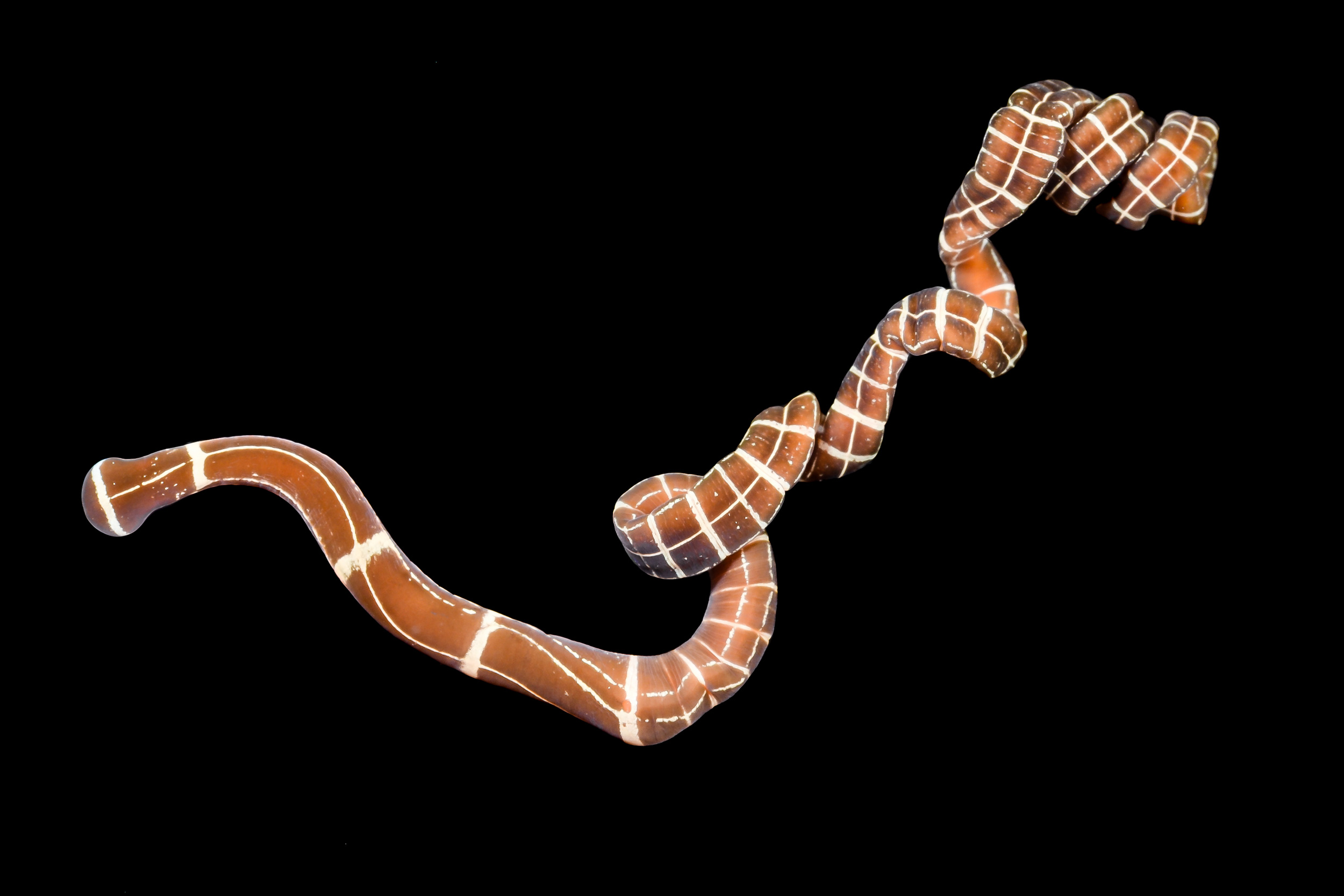 This beauty is a six-lined ribbon worm, a type of animal called a nemertean. (It’s in its own group separate from the “true” worms, or annelids, which are built of segments.) If cut in half, both the front and back end of a nemertean will regenerate the missing pieces. Photo by Gustav Paulay 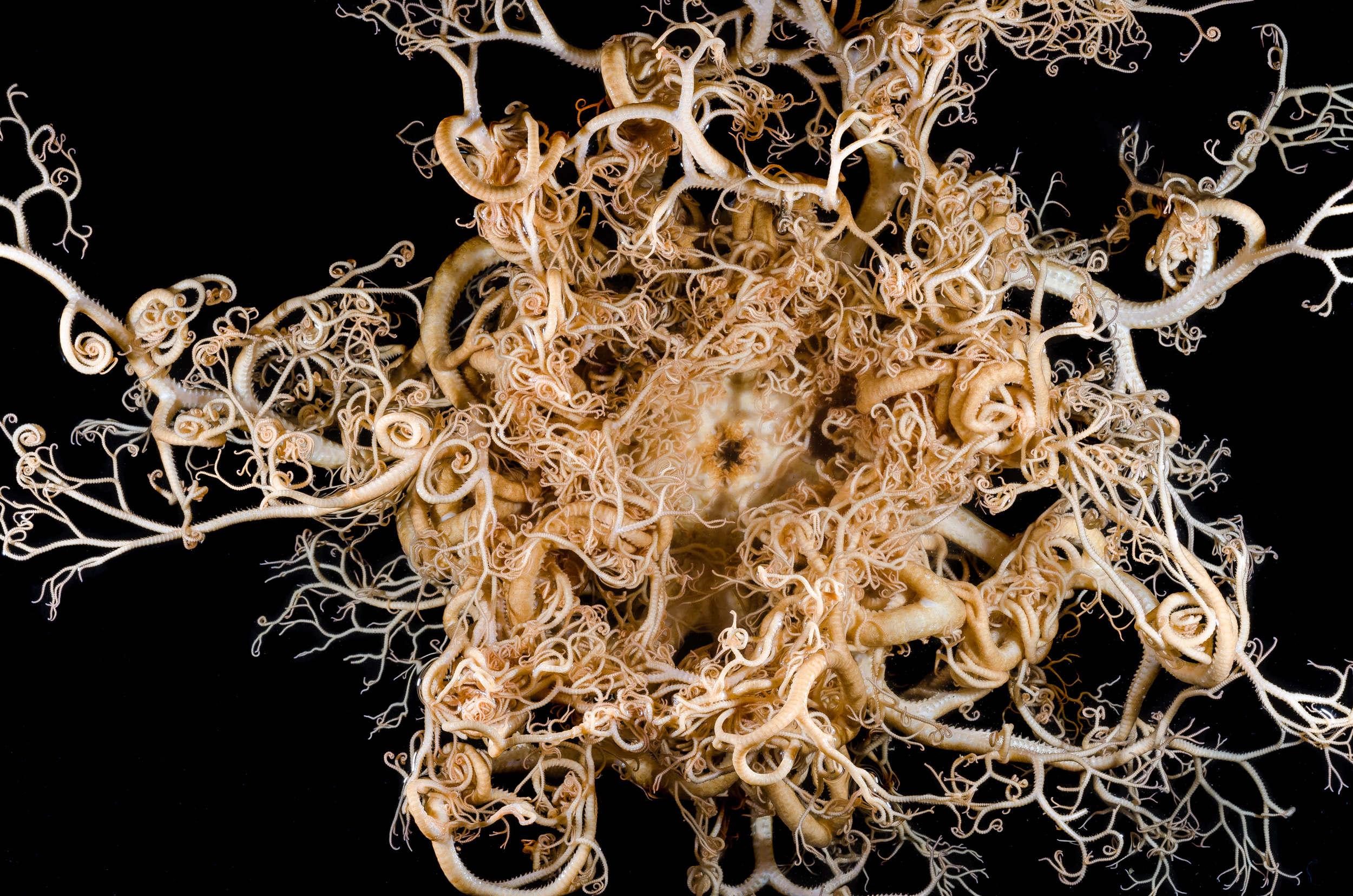 Basket stars are relatives of sea stars. To catch plankton for food, they hold their feather-like arms in the current. The genus name, Gorgonocephalus, is Greek for “dreaded head,” and refers to the creature’s resemblance to the Gorgon beast from Greek mythology. Photo by Mandy Bemis 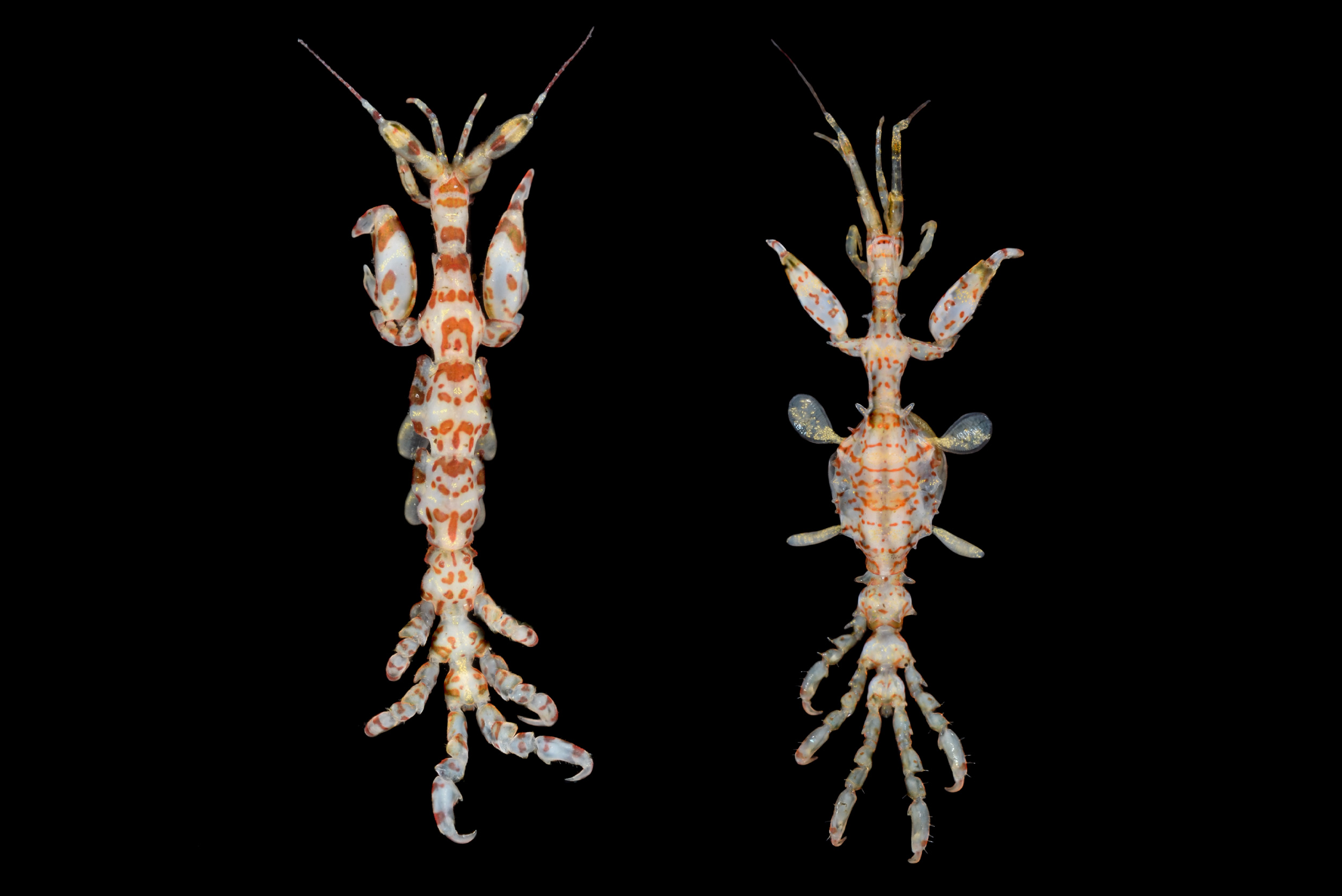 A male (left) and female (right) caprellid amphipod, also known as skeleton shrimp. They use their back legs to grasp onto a piece of seaweed, or even another animal. As they sway in the current, snagging pieces of floating food, caprellids resemble praying mantises. Photo by Gustav Paulay 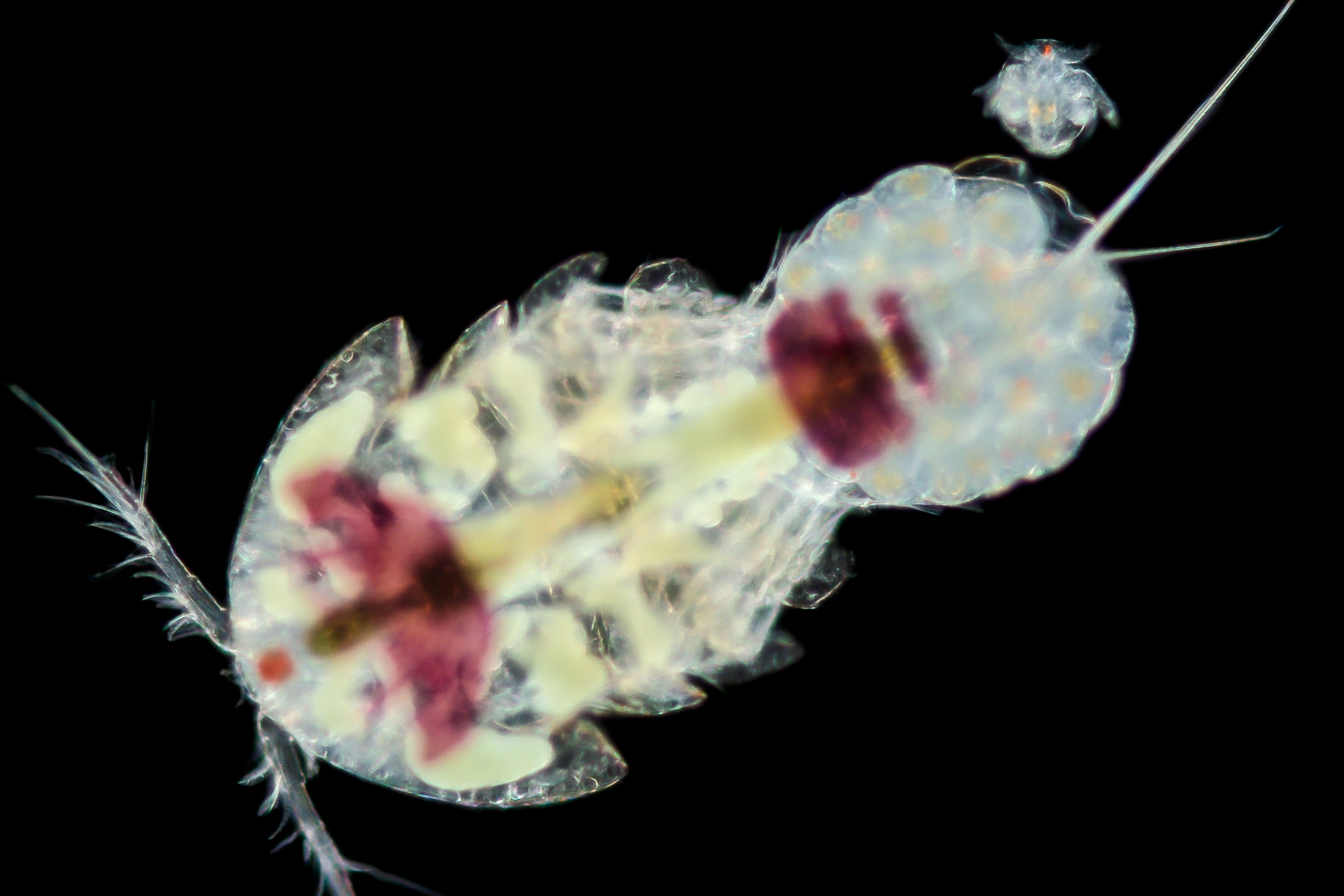 A copepod gives birth to a miniature cyclops offspring. The red dot on its head is a rudimentary compound eye. Photo by Noriko Okamoto 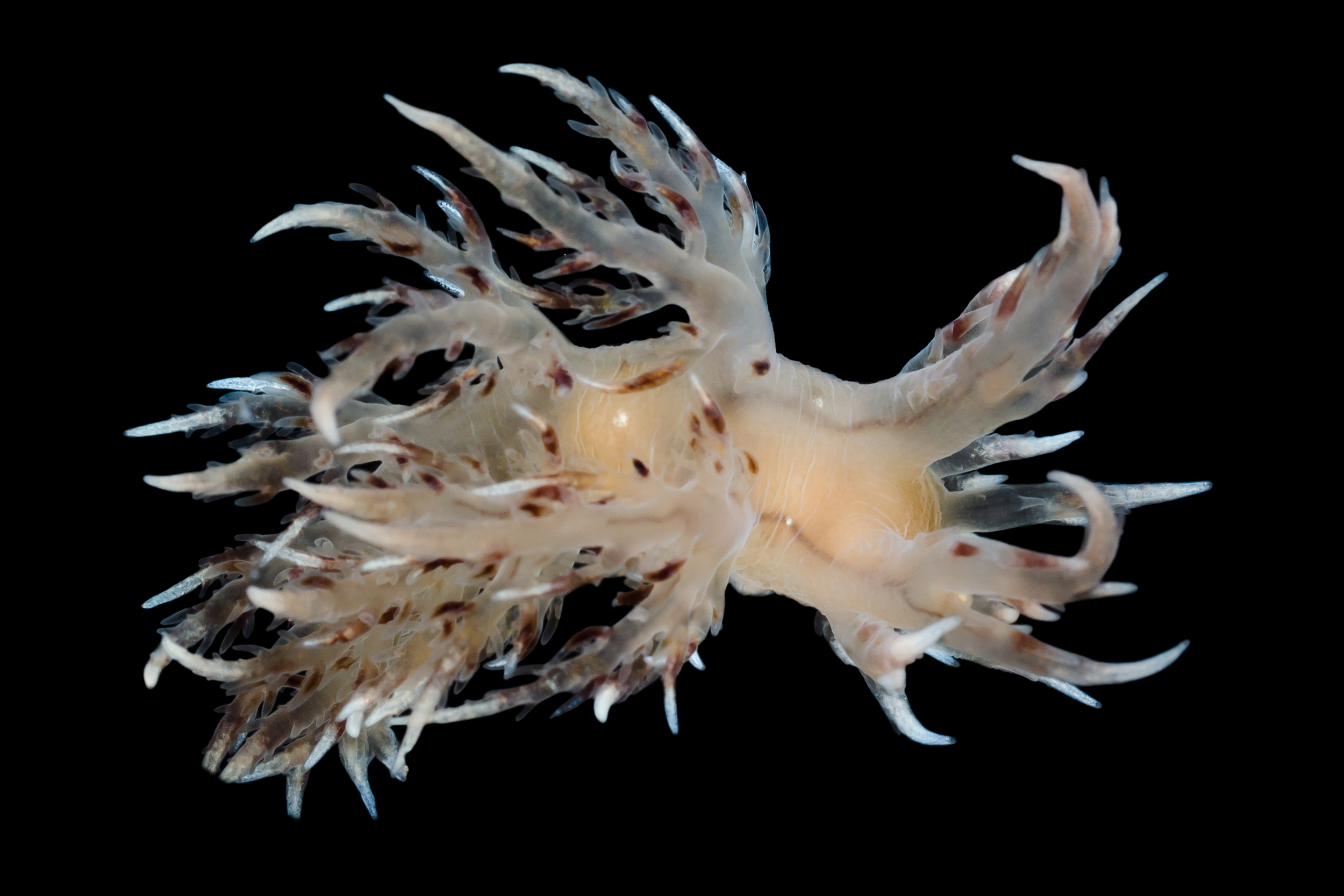 A giant bushy-backed sea slug is a tube-dwelling anemone’s worst nightmare. These titans can reach a half meter in length and crawl along the sandy bottom of the ocean searching for an anemone meal. They’re also accomplished swimmers, and will swim if disturbed. Photo by Mandy Bemis 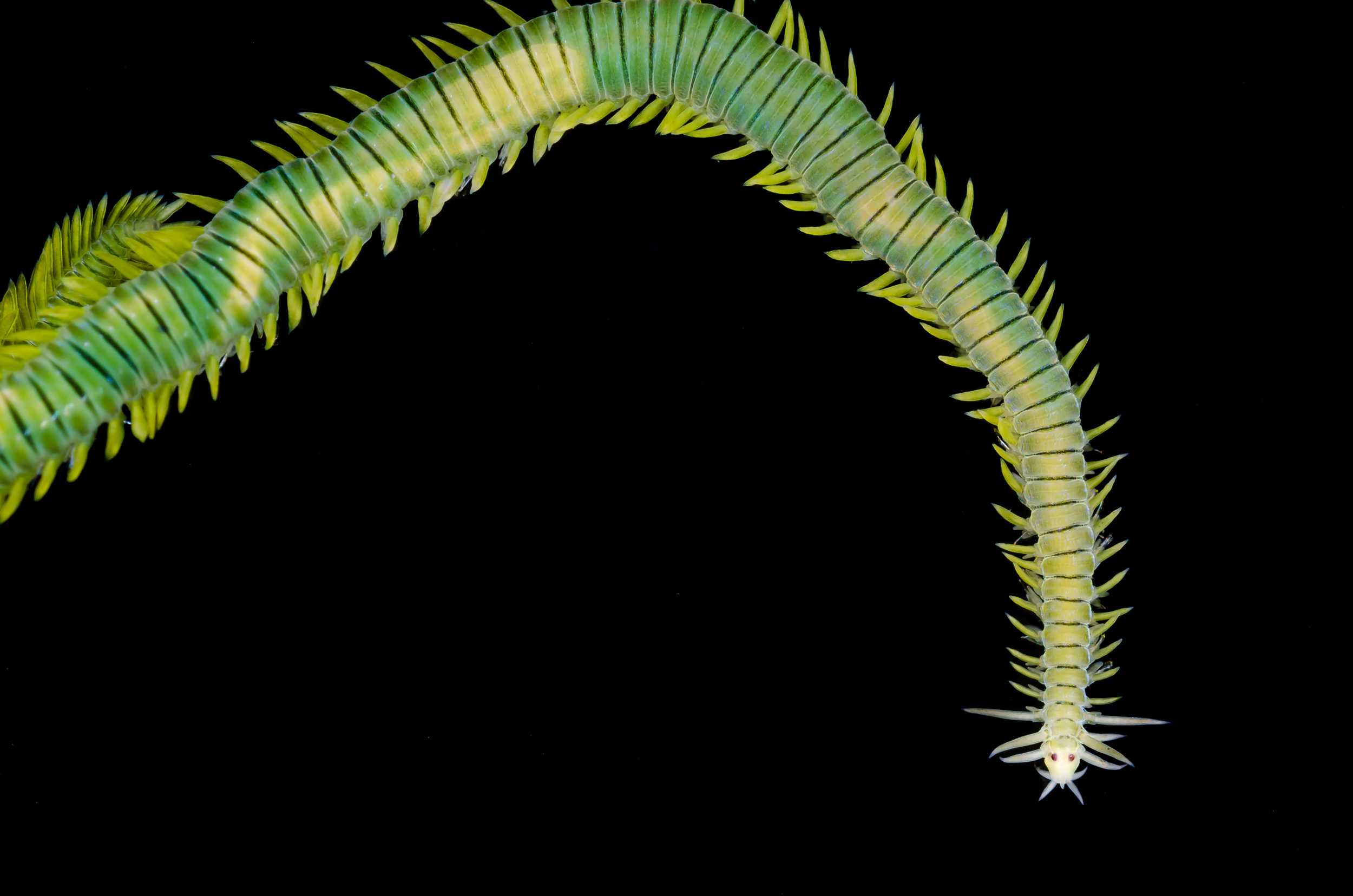 This fluorescent green paddleworm was one of over 220 polychaete worm species found during the three-week bioblitz. Photo by Gustav Paulay 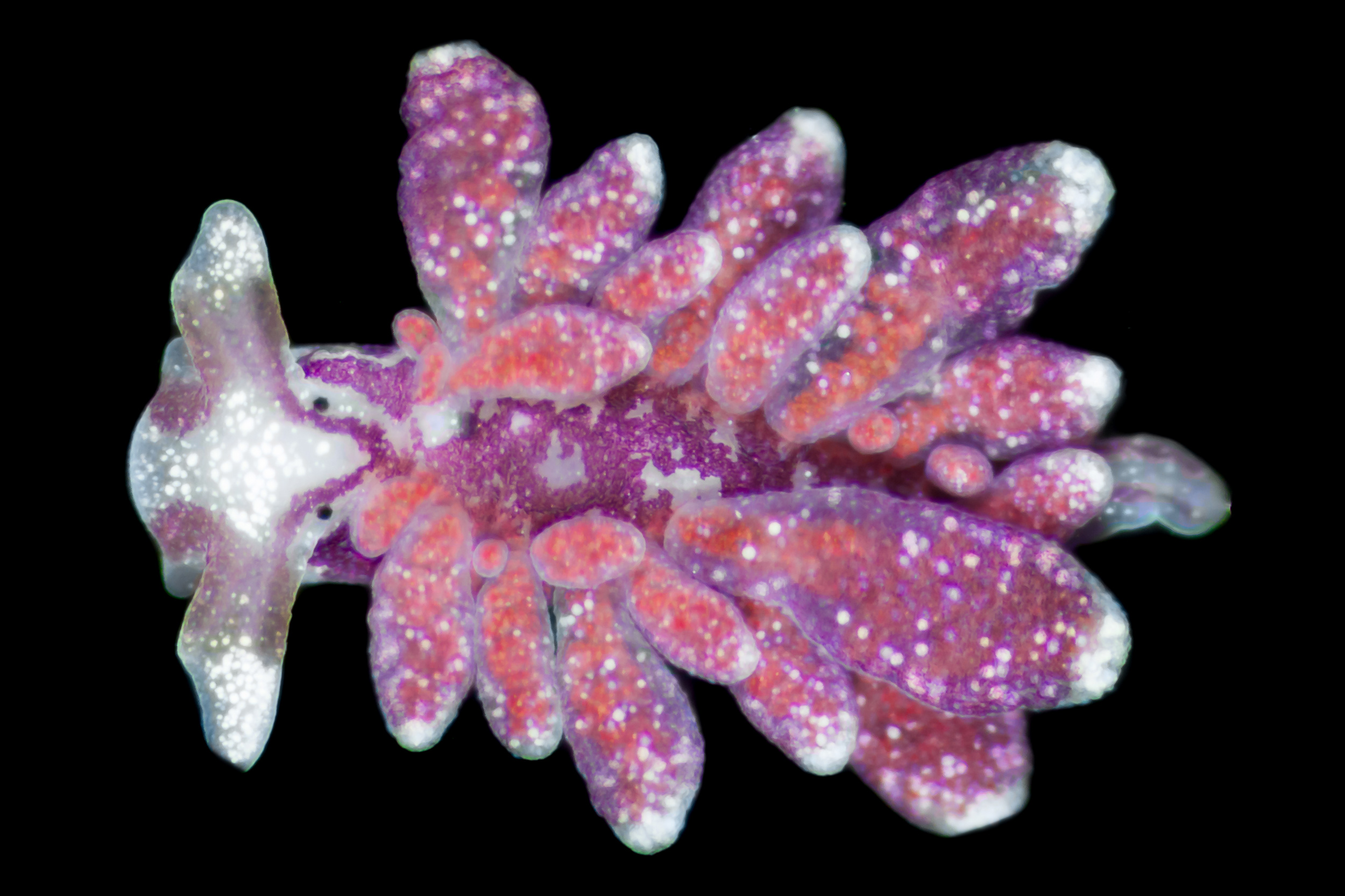 Just three millimeters long, this nudibranch relative called a sacoglossan was collected on a piece of red coralline algae that it was feeding upon. Sacoglossans get their common name, sapsuckers, from their ability to suck in whole algal cells. Many species co-opt these cells to gain the ability to photosynthesize. Photo by Leslie Harris 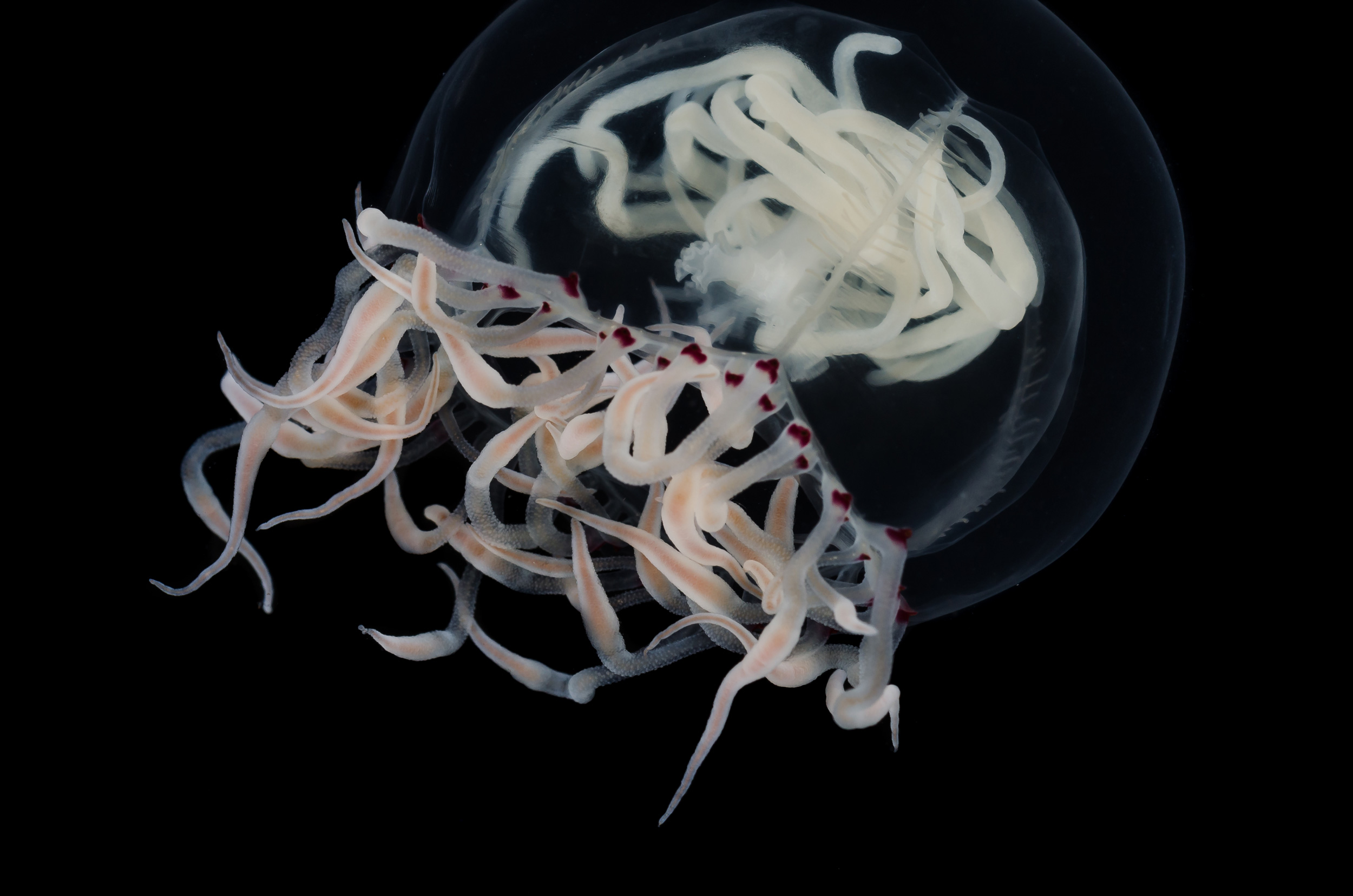 As its name suggests, the red-eyed medusa jellyfish has a ring of red “eyes.” They can’t see shapes, however they are light sensitive and help the jellyfish orient itself. Photo by Mandy Bemis 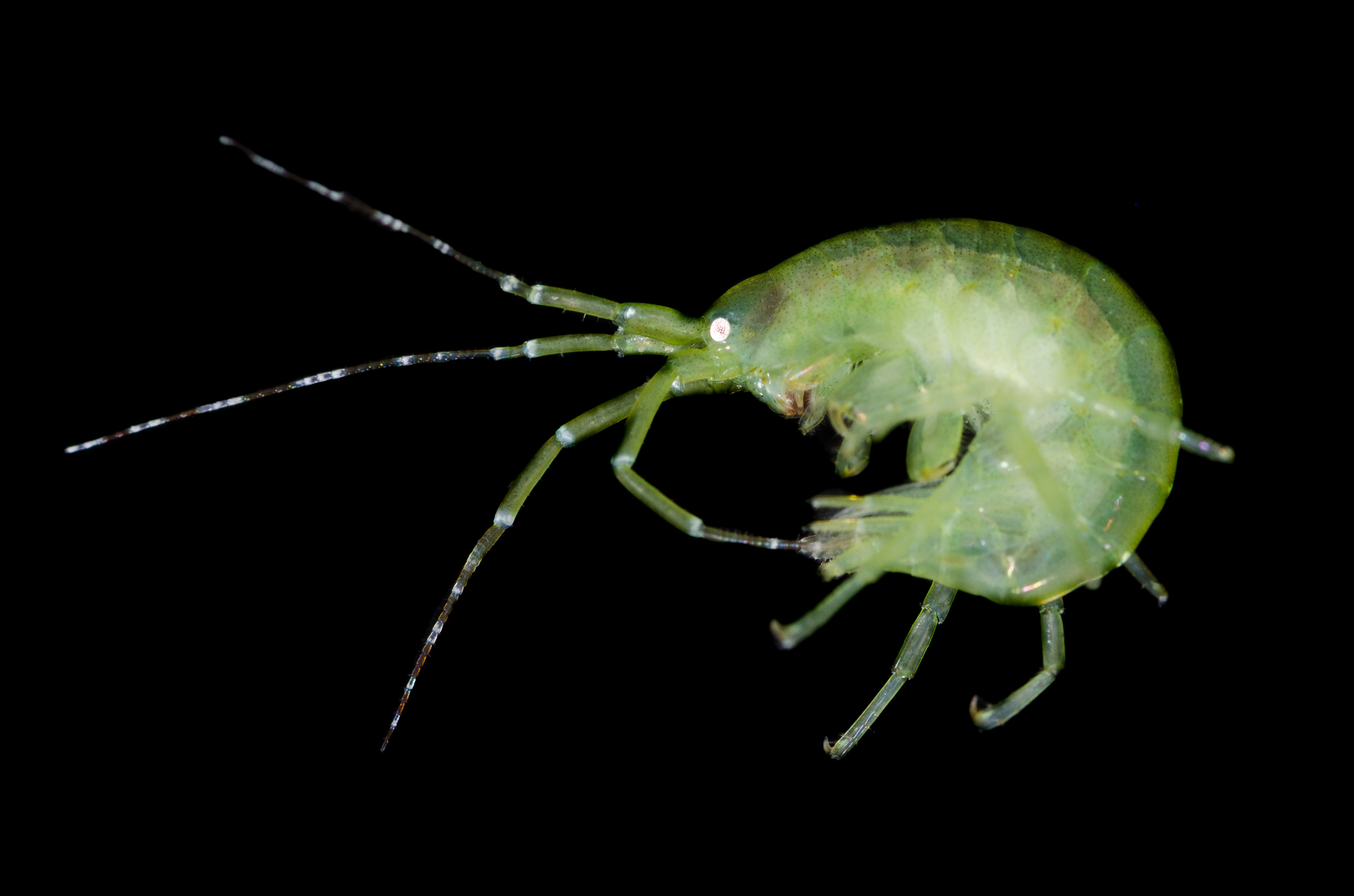 A rice-sized green amphipod, a crustacean related to the beach hoppers commonly seen on the beach, does its best Kokopelli impression. Photo by Mandy Bemis 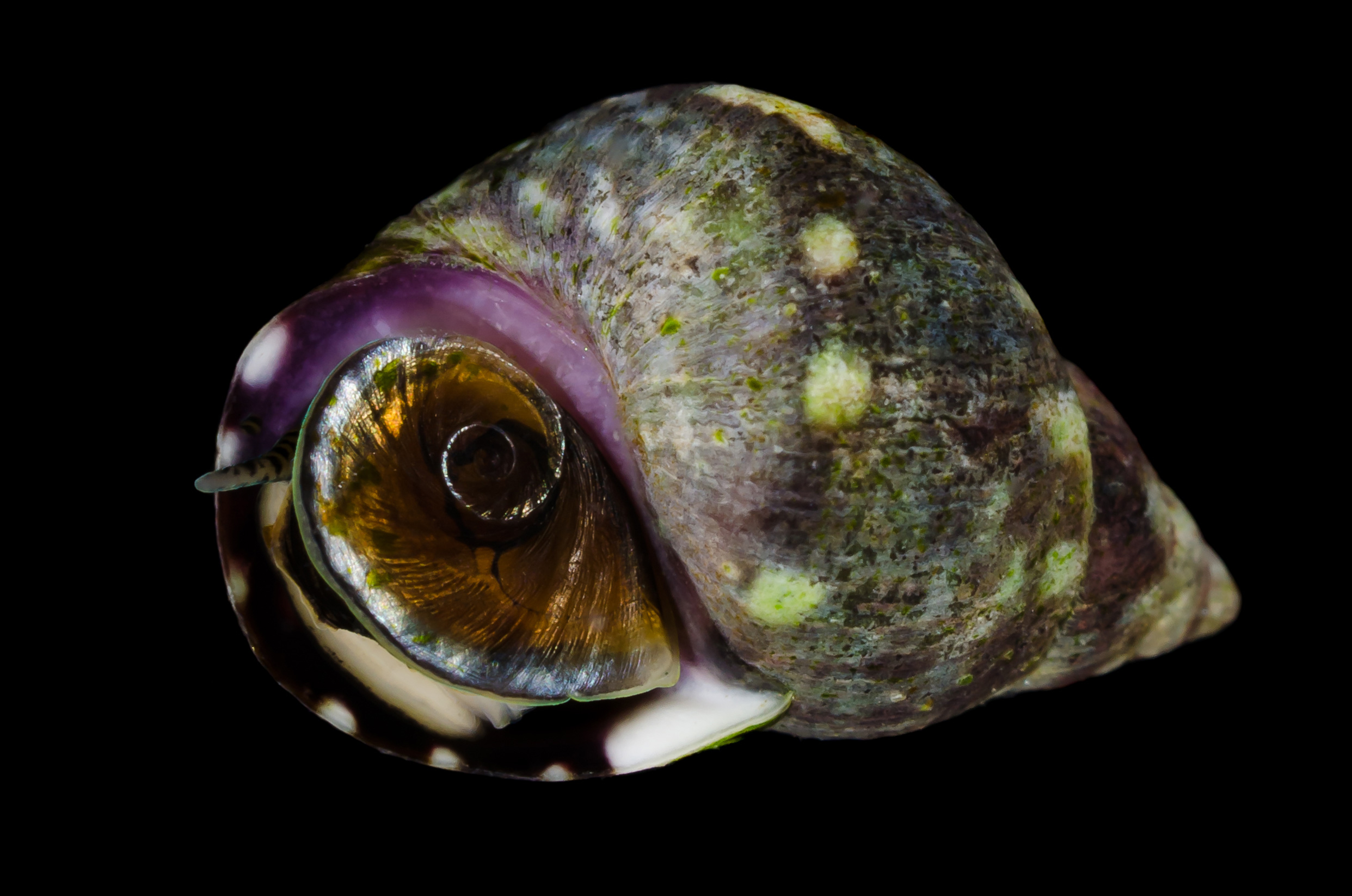 On the seashore, these common periwinkle snails look like misshapen black peppercorns randomly clinging to every surface. But look closer and their beauty becomes apparent. The swirled brown exterior surface, called an operculum, acts as a door to defend the snail from predators. Photo by Tanya Prinzing 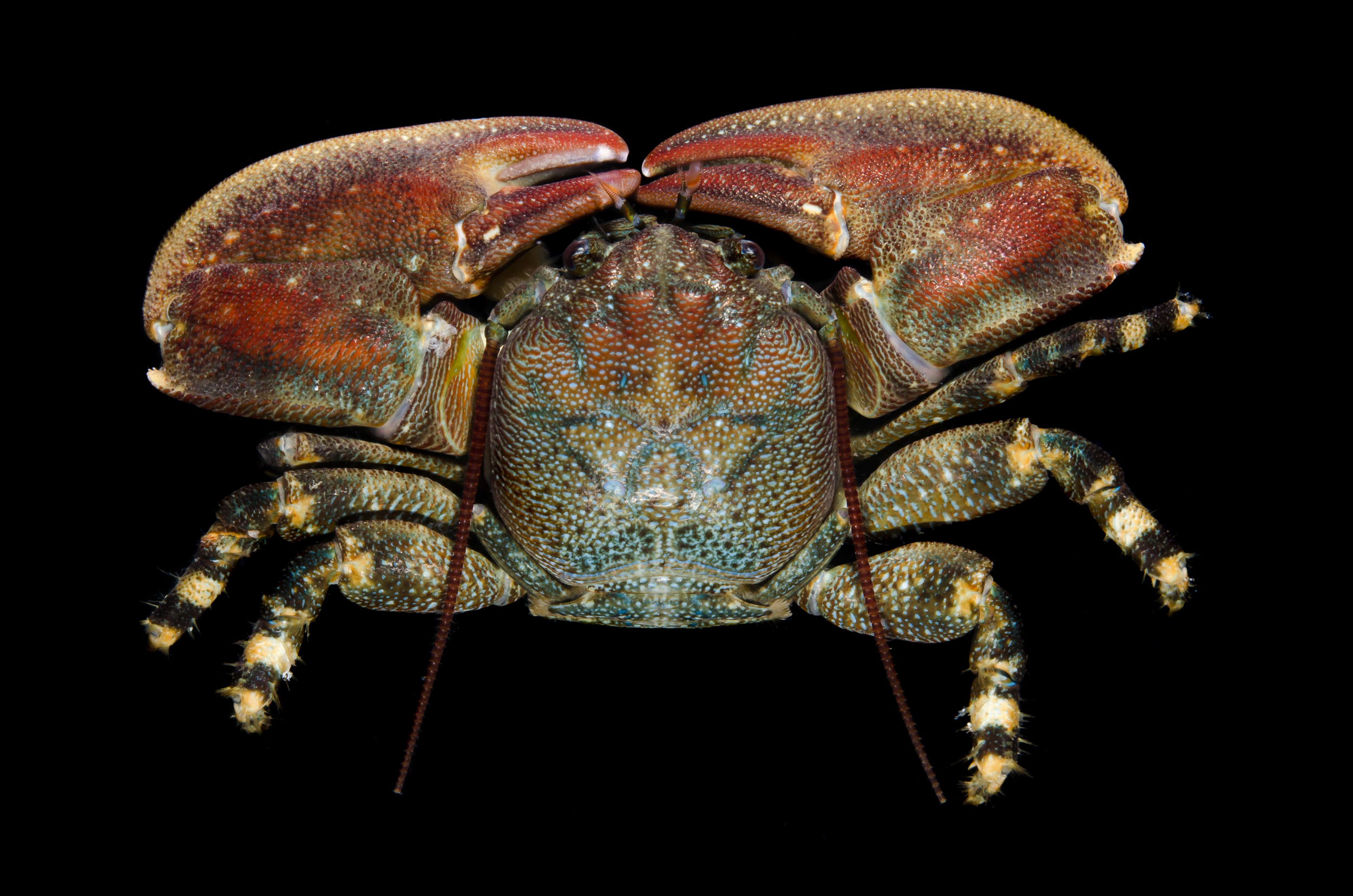 Porcelain crabs are flattened to hide under rocks in the intertidal. They use feather-like appendages to filter plankton out of the water. Their big claws, on the other hand, are used to fight off other crabs. Photo by Gustav Paulay 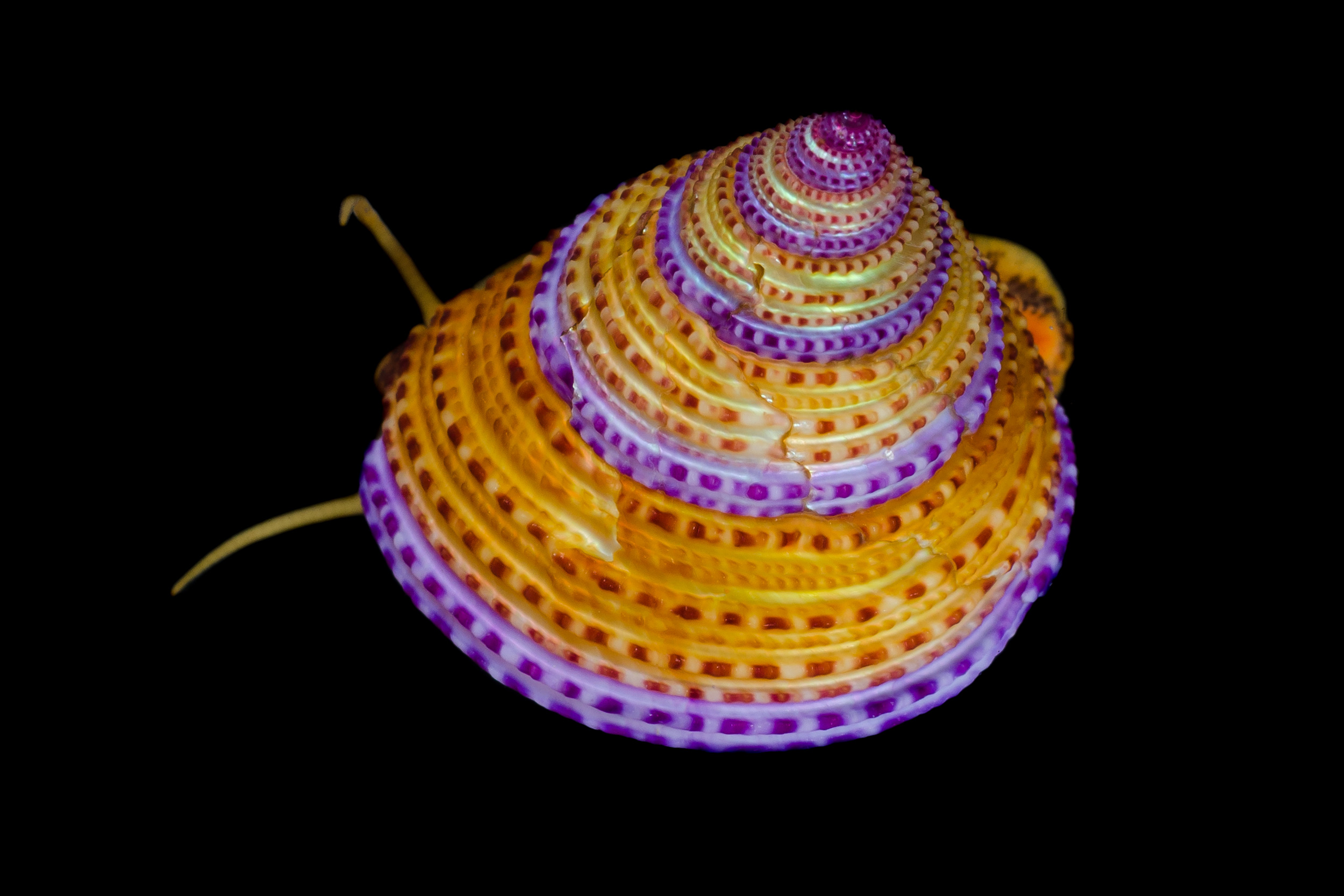 Purple-ring top snails were one of the first mollusks to be scientifically named on the west coast of North America, as Captain James Cook collected specimens on a voyage in the late 18th century. Photo by Mandy Bemis 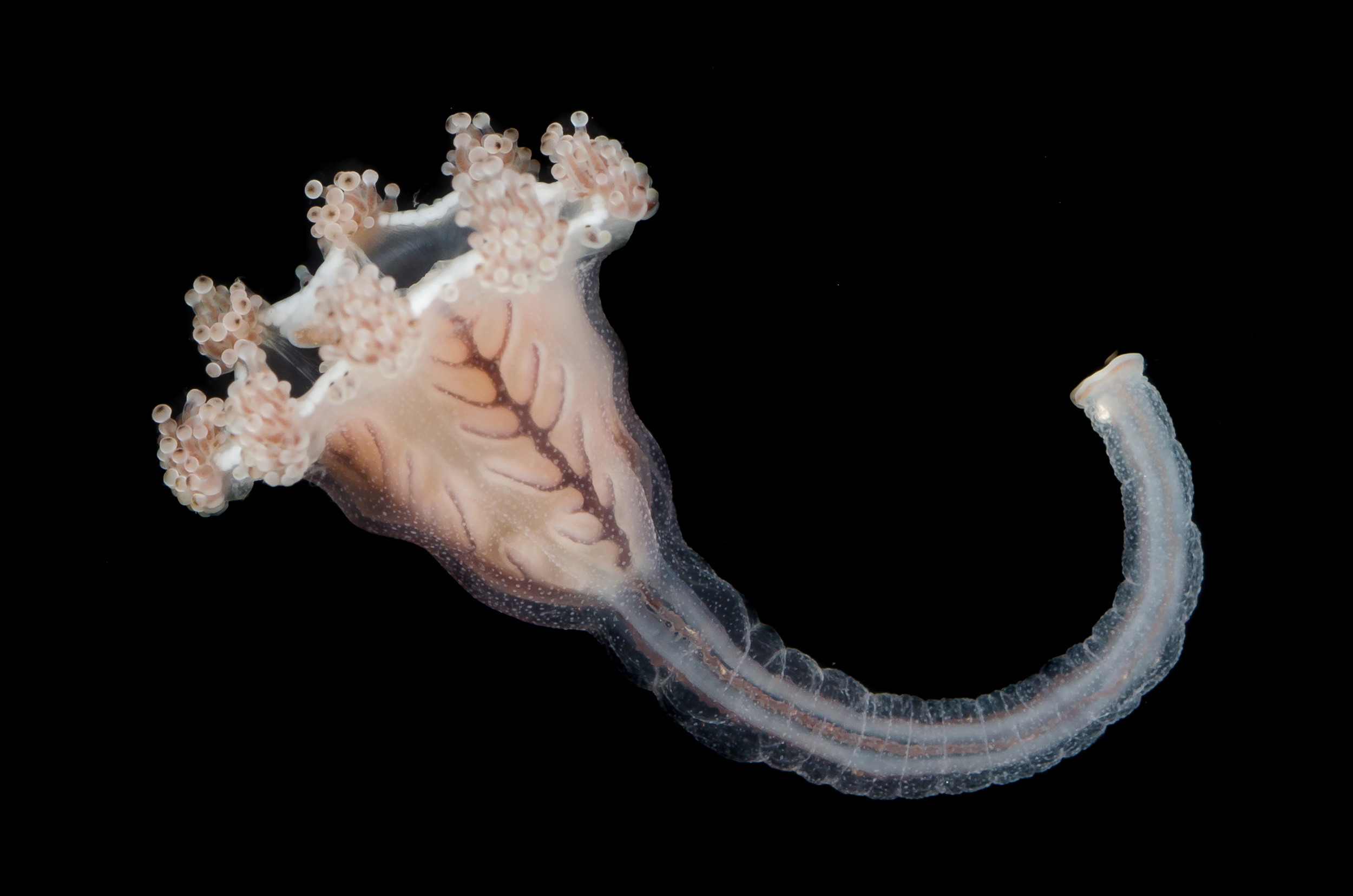 The Peter Pan of jellyfish, stalked jellies never grow up into free-floating medusae. Only 50 or so species are known worldwide, but during the Calvert Island bioblitz taxonomists think that one, perhaps two, new species were found. Photo by Mandy Bemis 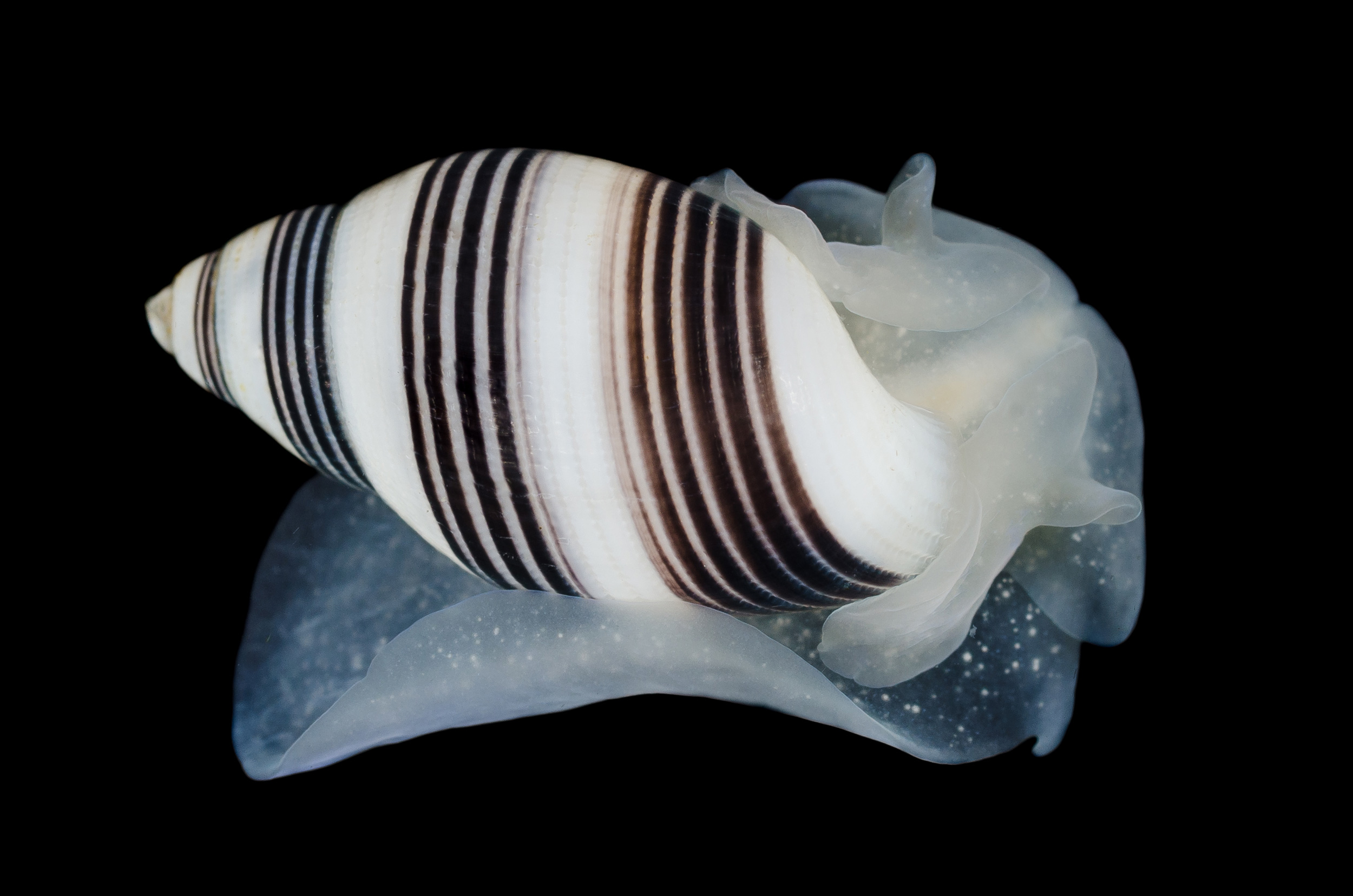 A striped-barrel bubble shell is like a cross between a snail and a sea slug. Like snails, they can pull their entire soft foot into their shell for protection. Photo by Mandy Bemis 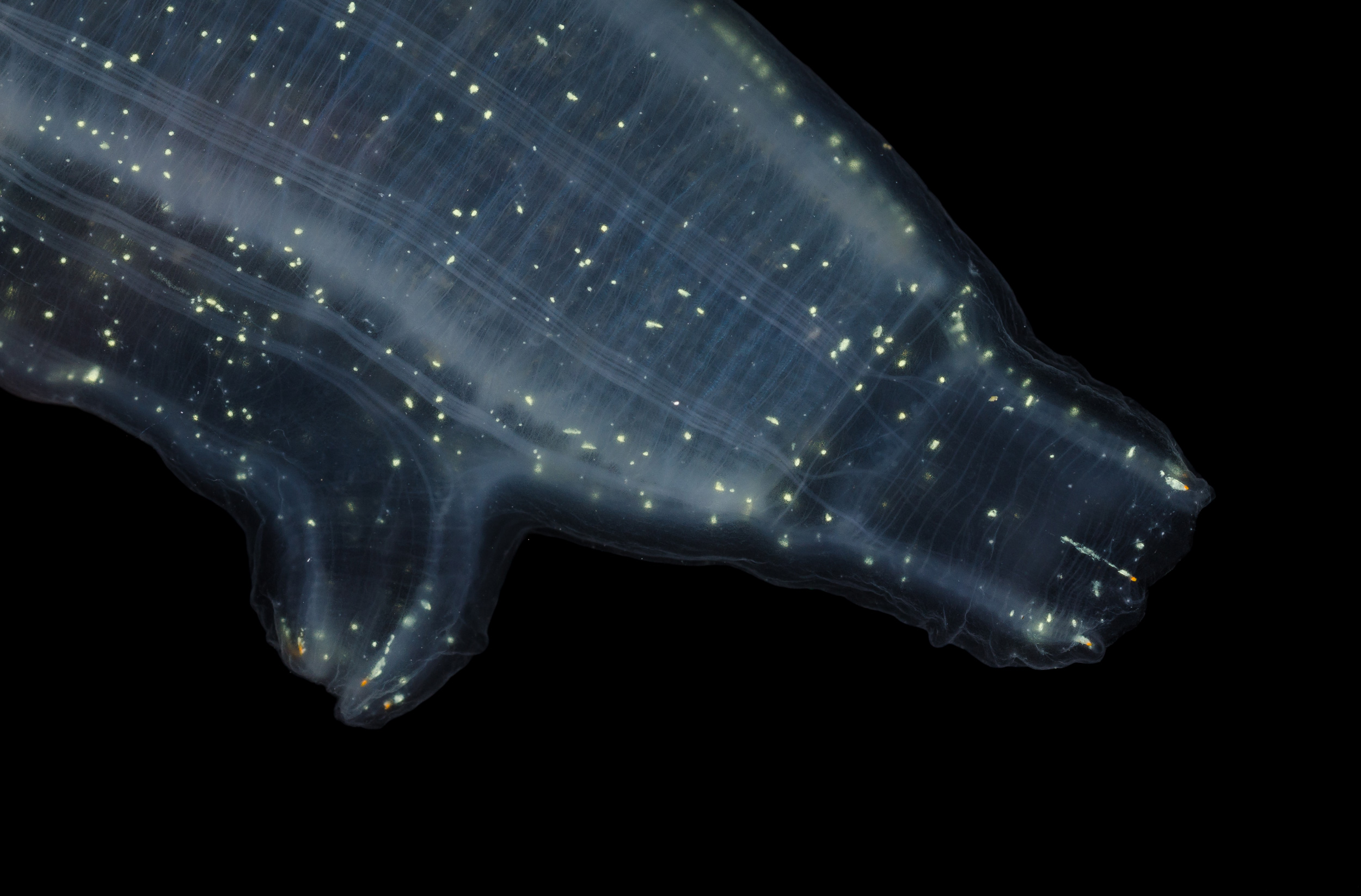 Believe it or not, when it comes to invertebrates, sea squirts are one of our closest relatives. Also called tunicates, sea squirts start out life as a swimming larva with a notochord, a cartilaginous precursor to a backbone. Only as adults do they attach to hard surfaces and take their sac-like form. Photo by Mandy Bemis 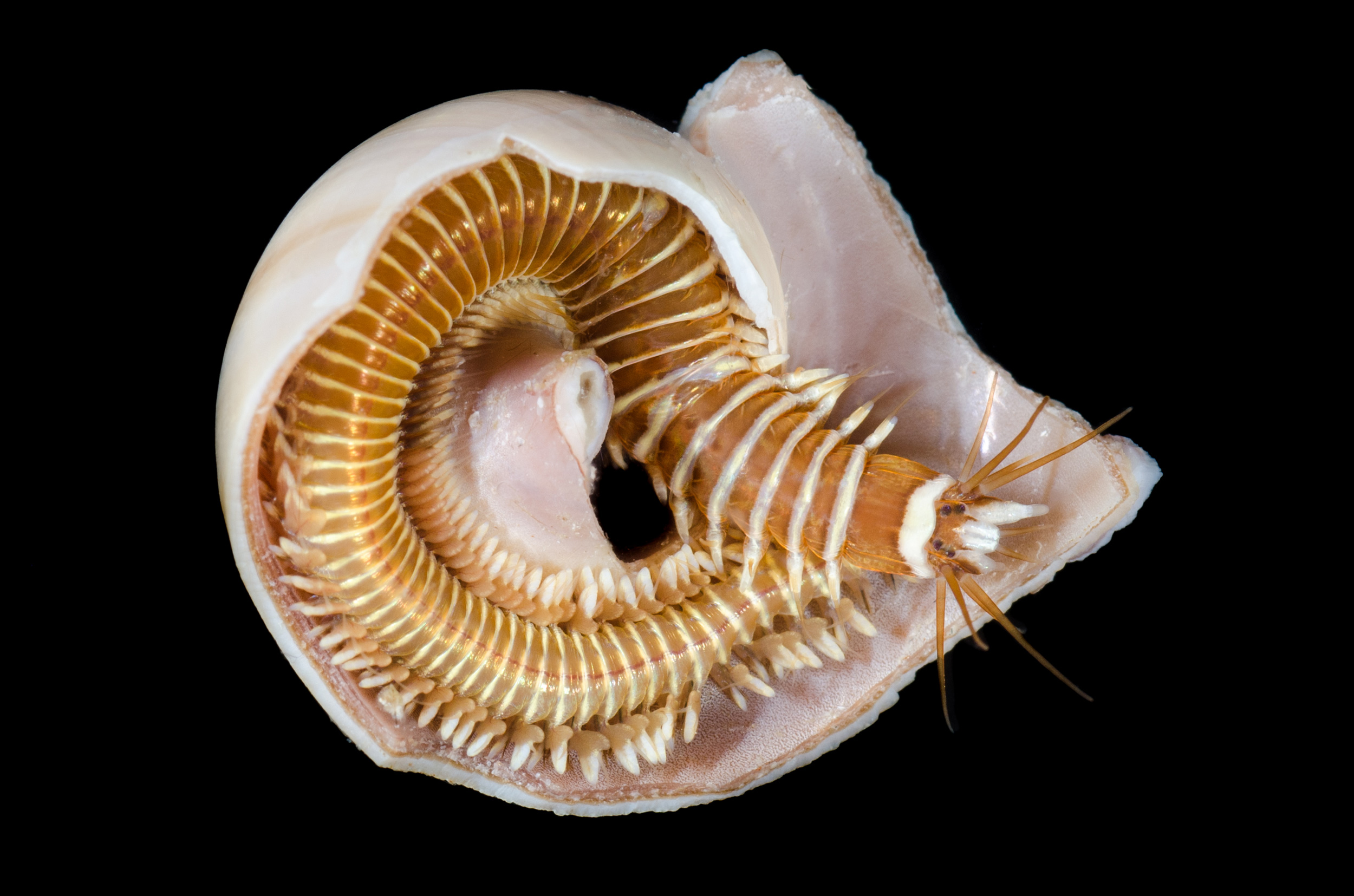 Even though it’s a tight fit, this worm once had a hermit crab for a roommate inside that old snail shell. The crabs seem to tolerate the presence of these worms as they keep the inside of the shell clean by picking up food scraps, and may pluck parasites off the hermit crab’s body. Photo by Mandy Bemis