Goliath grouper are the stars of South Florida’s reefs during spawning season, attracting all sorts of life forms—including those with camera gear. Photo by Michael Patrick O’Neill

As I drift north toward the Ana Cecilia off Singer Island, Florida, I prepare my underwater camera to photograph one of my favorite fish, the Atlantic goliath grouper. Dozens have gathered to socialize and spawn near the artificial reef. It’s late summer, and the Ana C and other South Florida wrecks are loaded with the giants, which travel from as far as 500 kilometers for their annual bacchanalia. To say the gentle monsters have an affinity for the submerged mountains of rusty metal is an understatement; they resemble little blimps as they circle the structures found up and down the Florida coast.

The fish are so docile this time of year that I can slowly swim right up and pet them as they hover, motionless, facing the current. They readily approach divers, too, sometimes even allowing them to remove hooks and fishing line. Their skin is surprisingly rough and leathery, a perfect shield to protect them from sharp corals, rocks, and metal. I’ve also learned to get their attention by gently tapping a small rock on my underwater camera housing or by digging in the sand with my hand. They always come in for a closer look.

In the scuba diving universe, pretty little fish and corals in crystal clear waters at exotic destinations first lure people into the water. But after the novelty wears off, divers go searching for the big stuff. And at a time when most dive locations have been stripped clean of large fish, the opportunity to swim with a creature reminiscent of a Volkswagen Beetle is irresistible. Goliaths are huge—one of the largest groupers—and harmless. During spawning time in August and September, divers pour off Florida’s charter boats by the hundreds, eager to interact with them. 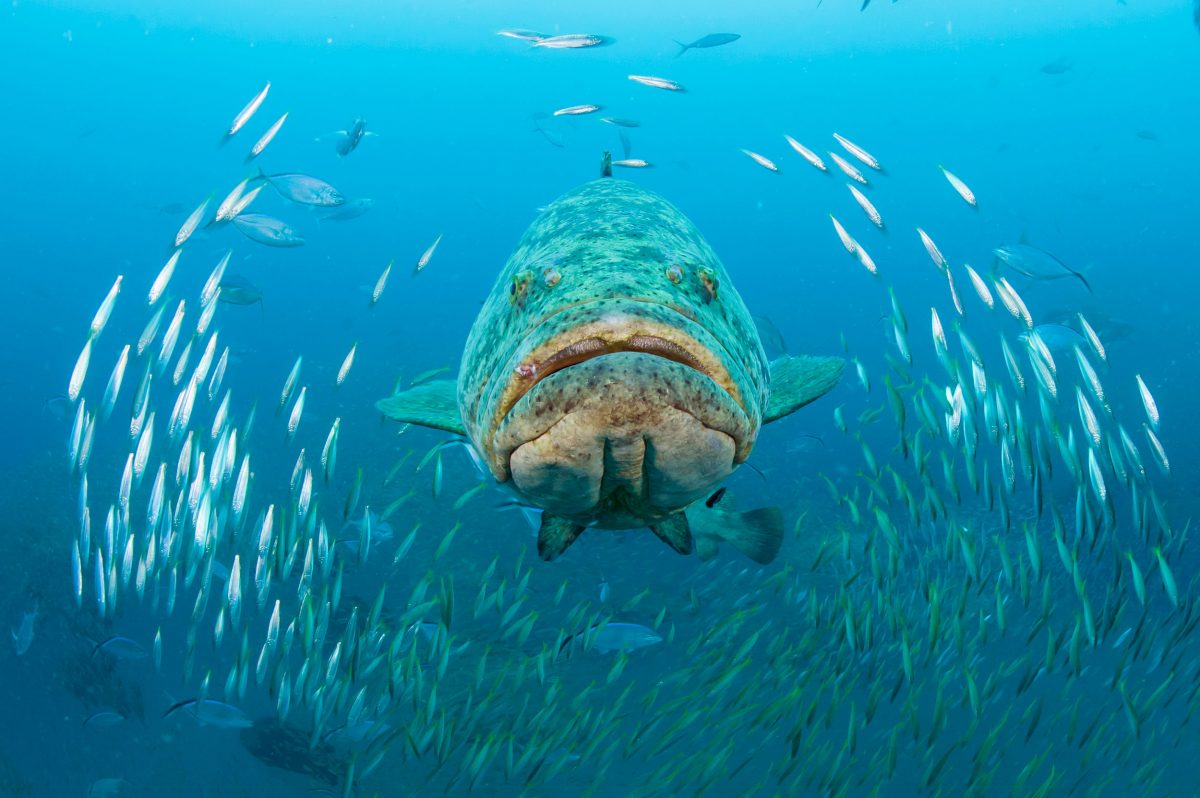 A goliath grouper swims through a school of round scad near the wreck-cum-reef Mizpah off Singer Island, Florida. Goliaths can exceed a whopping two meters and 300 kilograms.

As big and beloved as it is, the goliath is an enigma—what scientists deem a “data poor species.” Authorities seem to agree that overfishing pushed the species to near collapse, possibly snuffing out all but five percent of the original population. And they agree that a fishing moratorium implemented in Florida in 1990 allowed the goliath to stage an impressive comeback—the fish is repopulating estuaries, coral reefs, and artificial reefs around South Florida, bucking the trend throughout the rest of its range in the tropical and subtropical Atlantic.

Yet, how much the population has grown is subject to intense debate. Stock assessments by fisheries officials in 2004, 2010, and 2016 were rejected by an independent panel of scientists because of holes in the historical data. Without strong baseline information, policymakers are left to rely on perceptions and assumptions.

“We can see that in Florida—and especially South Florida—goliath grouper abundance has increased substantially, but we lack the data to assess whether they have recovered to safe levels throughout the original [US] range,” says Luiz Barbieri of the Florida Fish and Wildlife Conservation Commission (FWC). 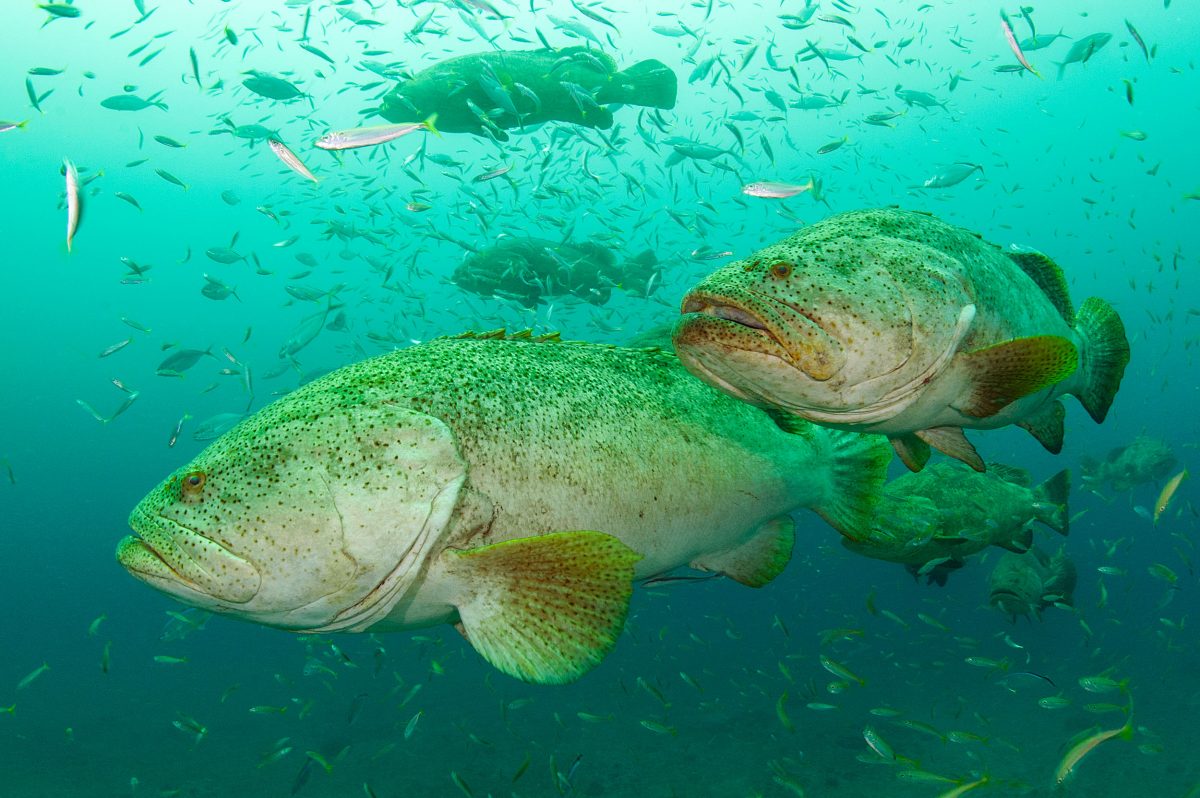 Goliath grouper hover in the current high above the Mizpah. The fish can display different color patterns—sometimes shifting between them instantaneously—including the white, mottled design seen here, which is typically observed during spawning season.

In contrast, some fishermen consider the fish a nuisance and want to thin the herd, claiming that goliaths hoover the reefs with their garbage-can-sized mouths, putting pressure on depleted stocks of game fish such as snapper. They point out that some goliaths—many habituated by people—wait under boats to steal hooked fish or follow divers to grab their snared lobsters and other catches. Research by Koenig and reef fish ecologist Felicia Coleman provides a different perspective: like any large predator, goliaths might snag an opportunistic meal off a fishing line, yet the giants feed mainly on crabs and shrimp and supplement their diets with slow-moving bottom fish species, rather than sought-after game species. And Koenig shows that reefs in the Gulf of Mexico where goliaths are present enjoy greater biodiversity than those where they are absent.

Other fishers are calling for a limited harvest, perhaps for the chance to pose for trophy photos with their catch on the dock. Or to see goliath fillets splayed across their dinner plates, though meat from big goliaths can contain more mercury than the US Food and Drug Administration allows. At a public meeting in April 2018, FWC commissioner Michael Sole quashed the idea of a harvest: “Look, we’ve got this massive responsibility up here to manage the resource for all users. And based on the data and science presented, I just don’t see that it’s viable to even attempt a limited harvest at this stage.”

For now, only catch and release fishing is allowed, and large specimens must be kept in the water to prevent injury to their jaws and internal organs before they’re released. Reeling in a big one leaves you feeling like you survived—barely—12 rounds with boxing great Muhammad Ali. Trying to wrestle a fish the size and weight of a refrigerator from the bottom of the sea takes a strong back, heavy-duty tackle—including a hook the size of a man’s hand baited with a three-kilogram bonito—and a lot of grunting, sweating, and cursing. It’s not an elegant affair.

As FWC scientists look at options to better quantify the comeback to determine if and when a controlled harvest is appropriate, the grouper carry on, swimming lazily and cavorting with divers, oblivious to the debate about their future playing out on shore. 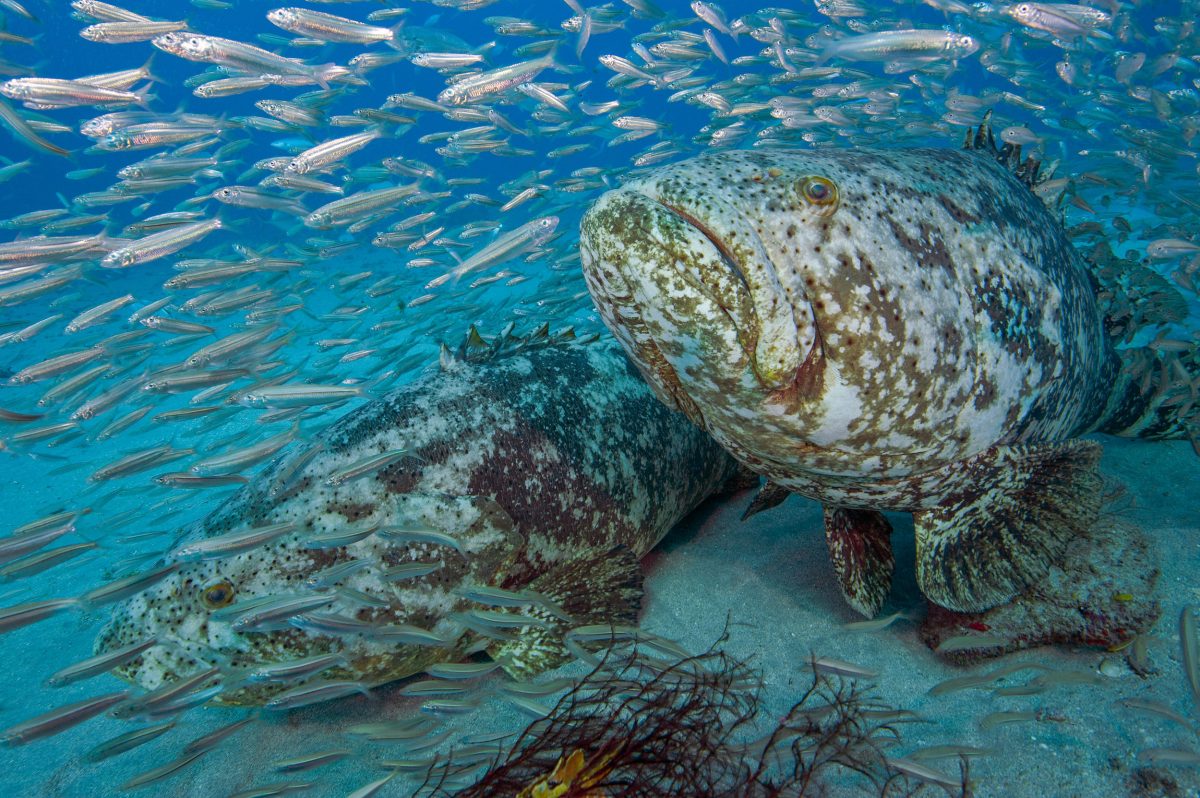 A pair of goliaths rests on the bottom near the Esso Bonaire artificial reef in Jupiter, Florida while round scad swim overhead. 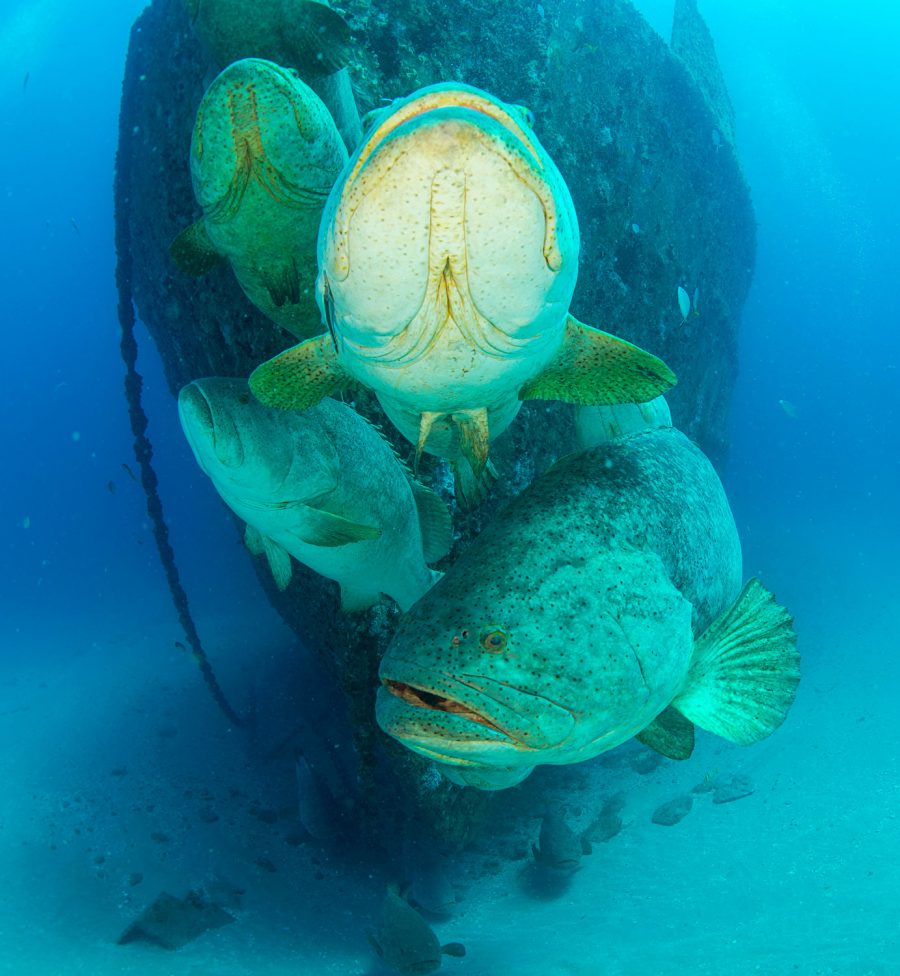 Goliath grouper hover near the bow of the Ana Cecilia during their annual spawning aggregation. 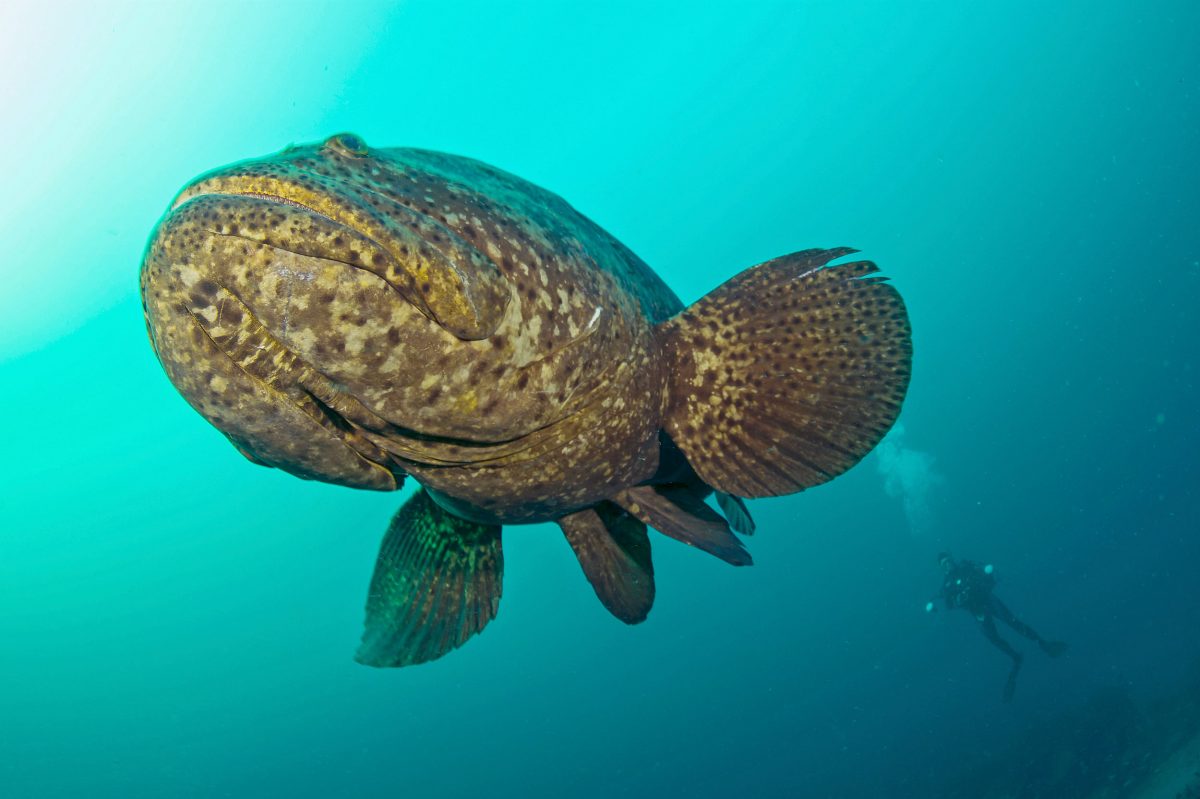 By nature, goliath grouper are curious and bold. One of the largest fish in the sea, they have little to fear as adults and will readily approach divers. Yet, if sick, injured, or struggling on a line, they may attract the attention of sharks and become the prey. 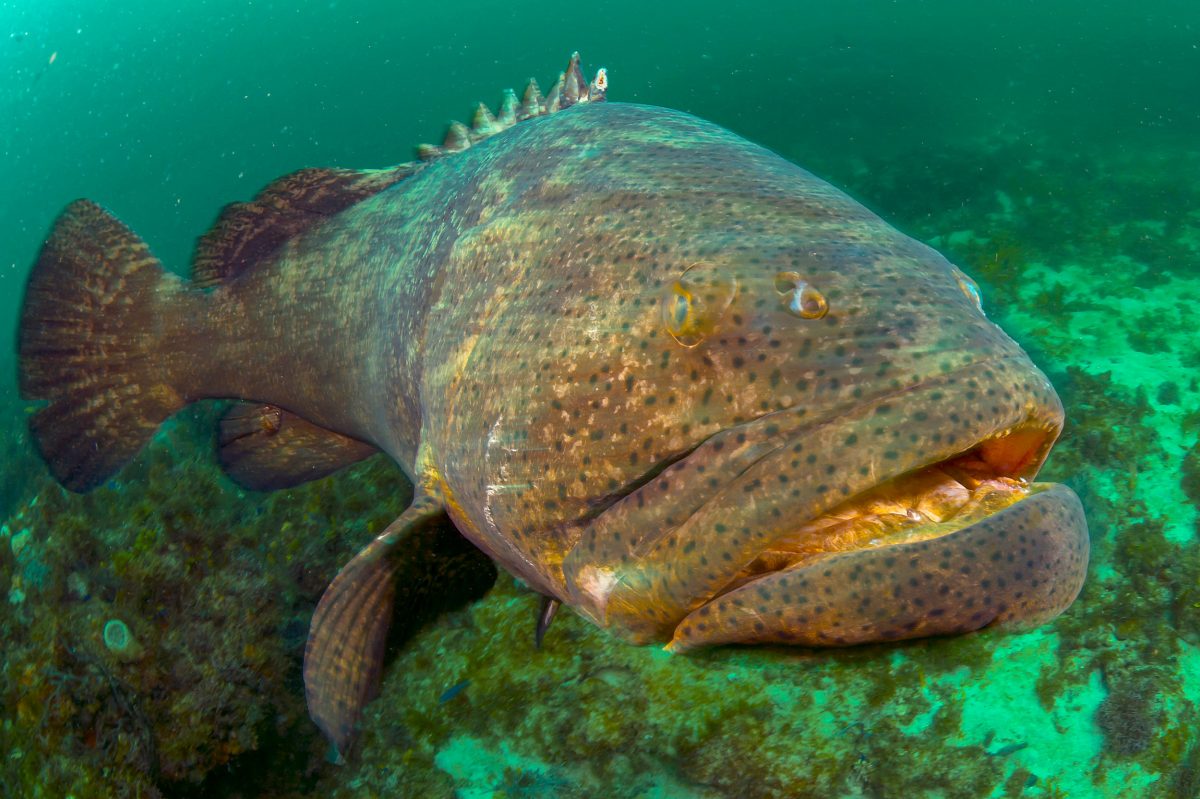 A goliath grouper known as Shadow calls a beautiful reef near Juno Beach, Florida, home and always greets and accompanies divers as they drift past its territory. 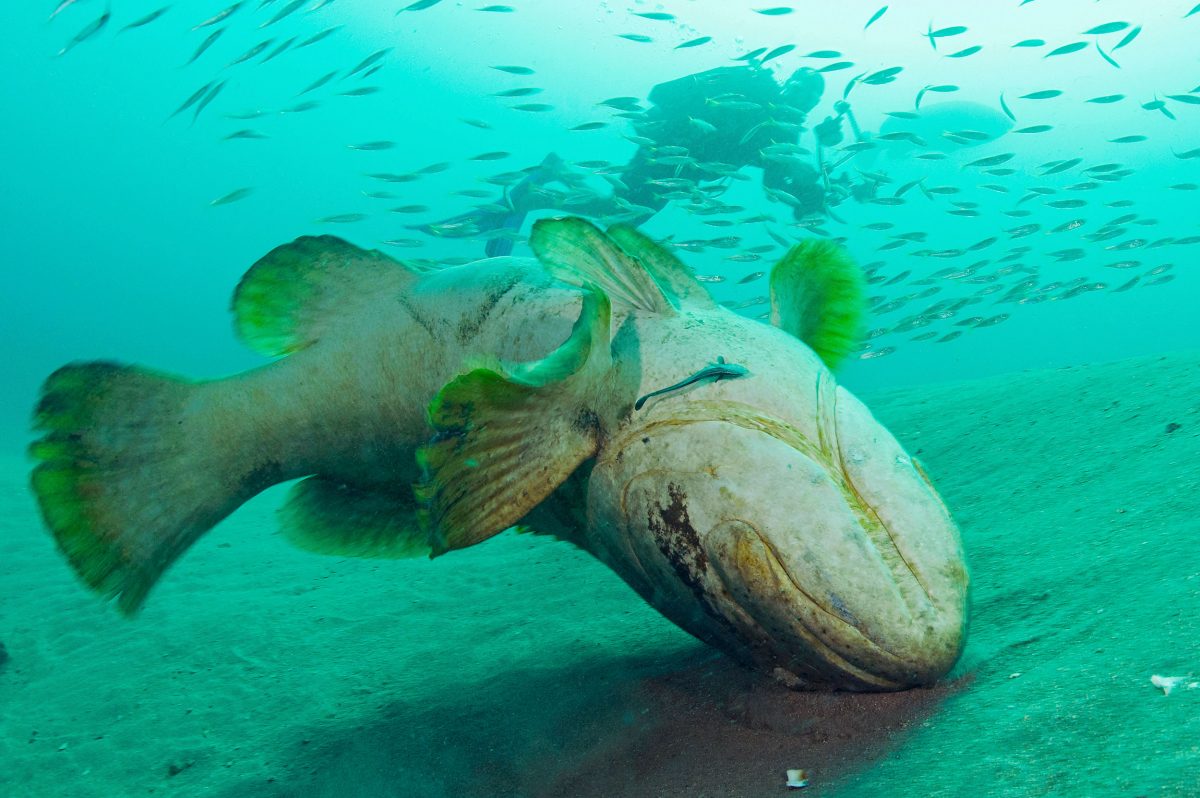 A goliath grouper scratches its nose by flipping upside down and rubbing against the coarse sand. 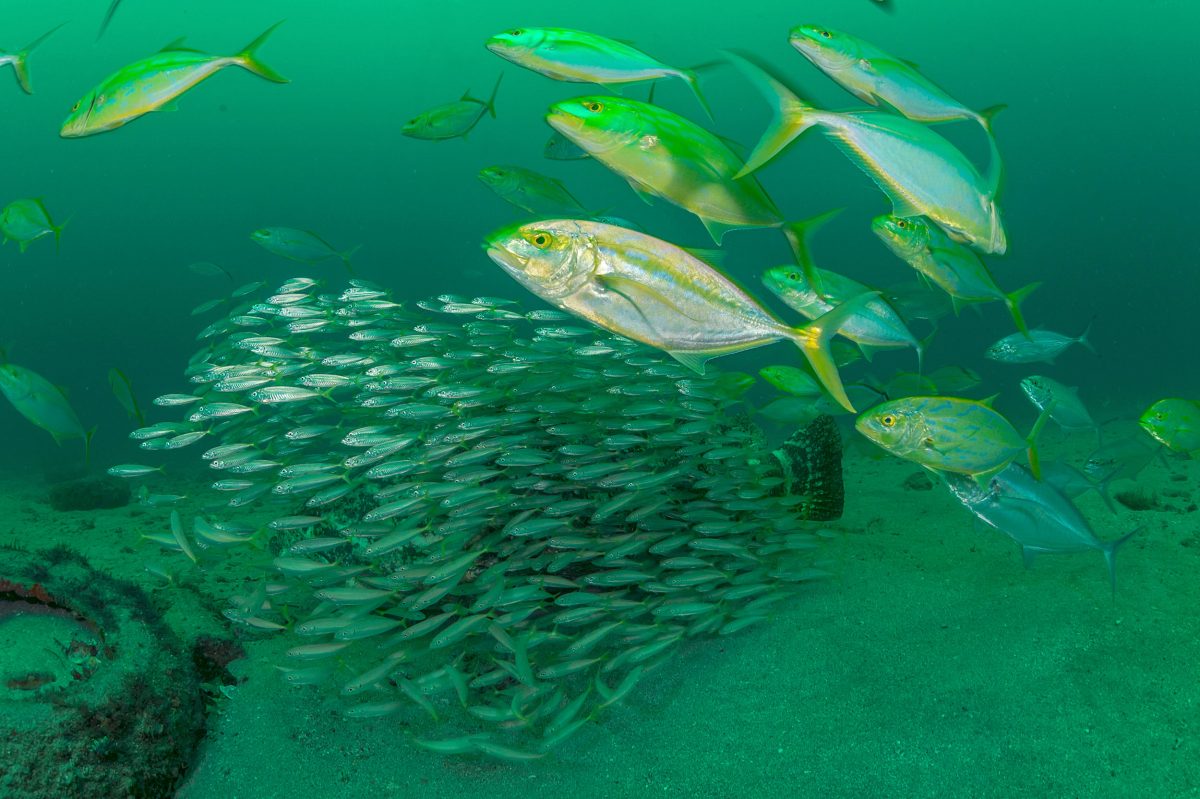 Predatory yellow jacks pounce on a school of round scad that has completely surrounded a goliath grouper. Round scad show up during the goliath grouper’s spawning aggregations, evidently to feast on the giants’ eggs. In turn the scad suffer mass casualties—eaten by barracuda, jack, snapper, and even adult goliaths. 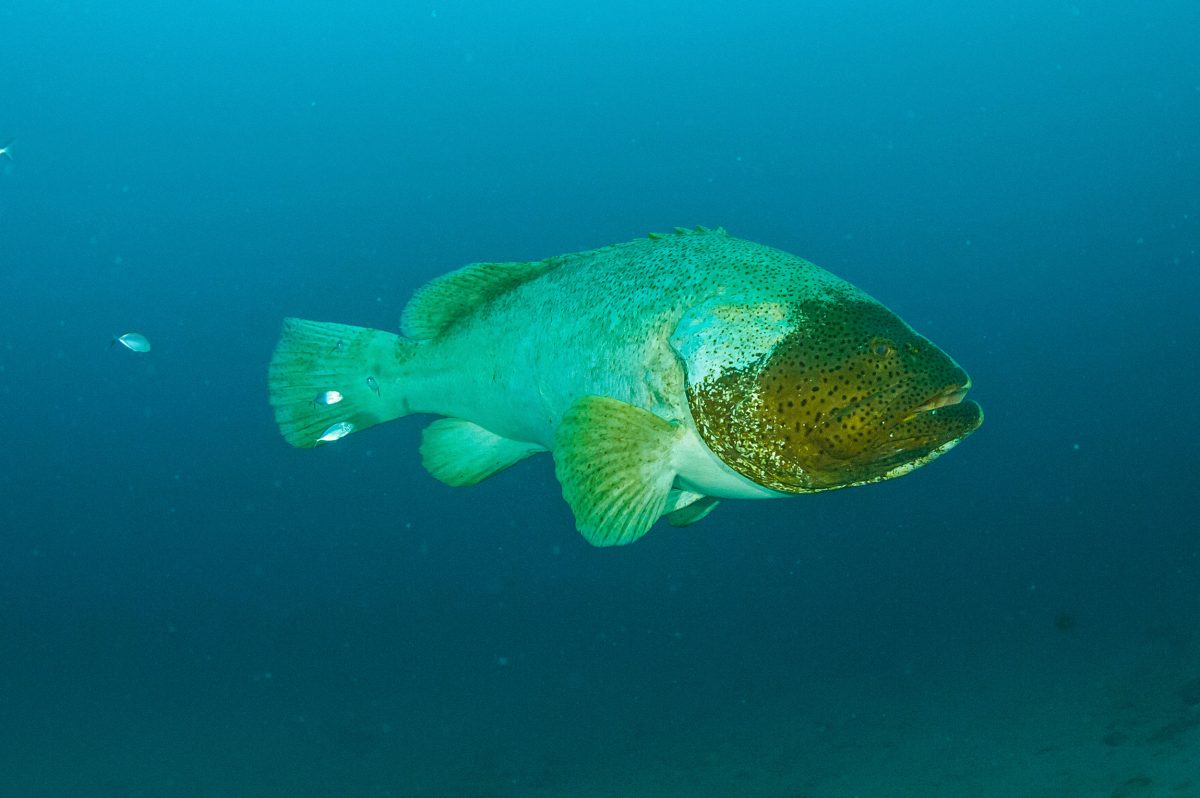 Identified by the dark patch on the right side of its face, the fish known as Braveheart is a fixture on the Mizpah and other artificial reefs near Singer Island in the late summer. 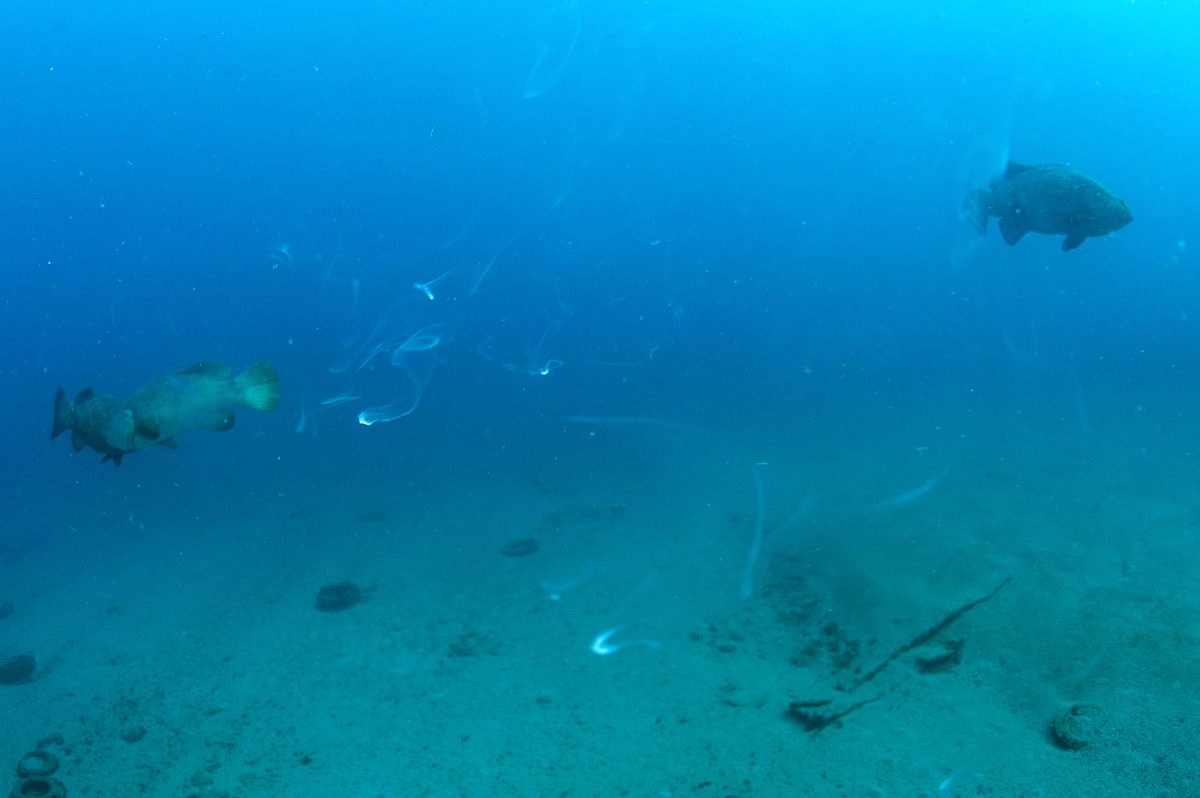 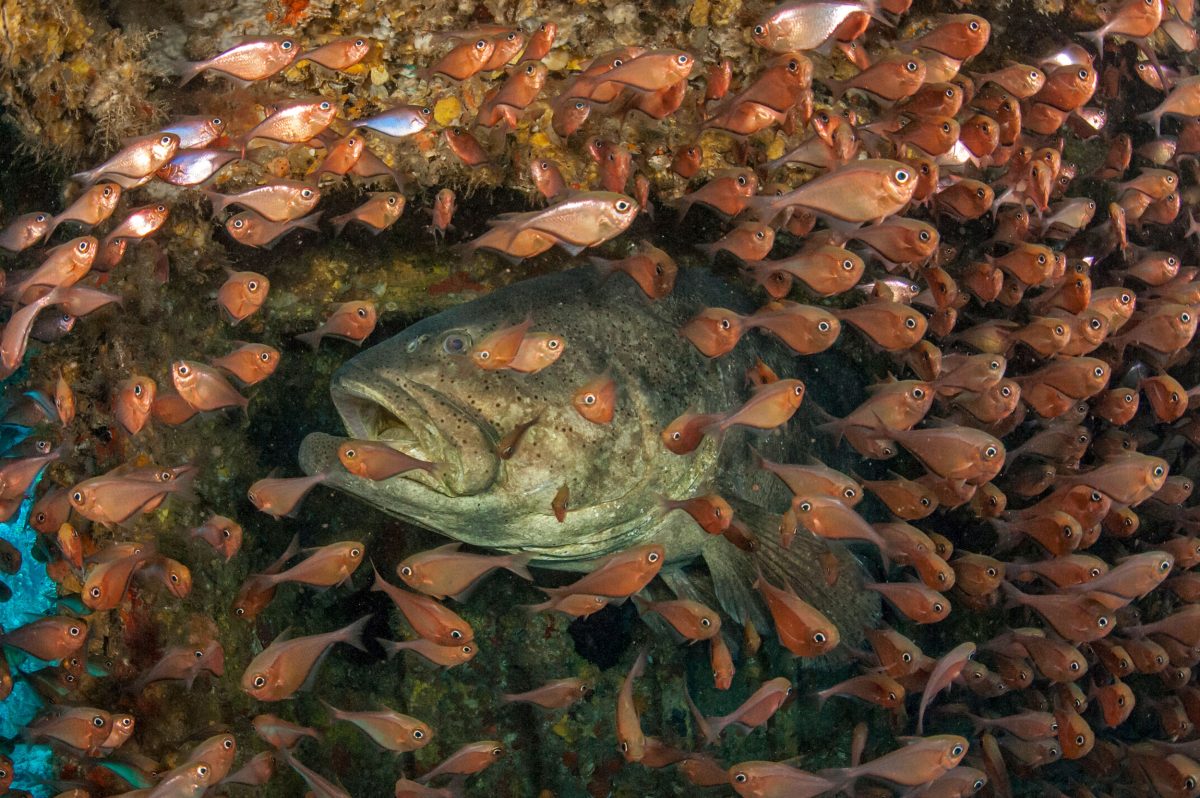 Goliaths love structures, especially shipwrecks and other artificial reefs, because they offer shelter and food. In this image, a large goliath hides behind a curtain of glassy sweeper deep inside the Spearman’s Barge off Singer Island. 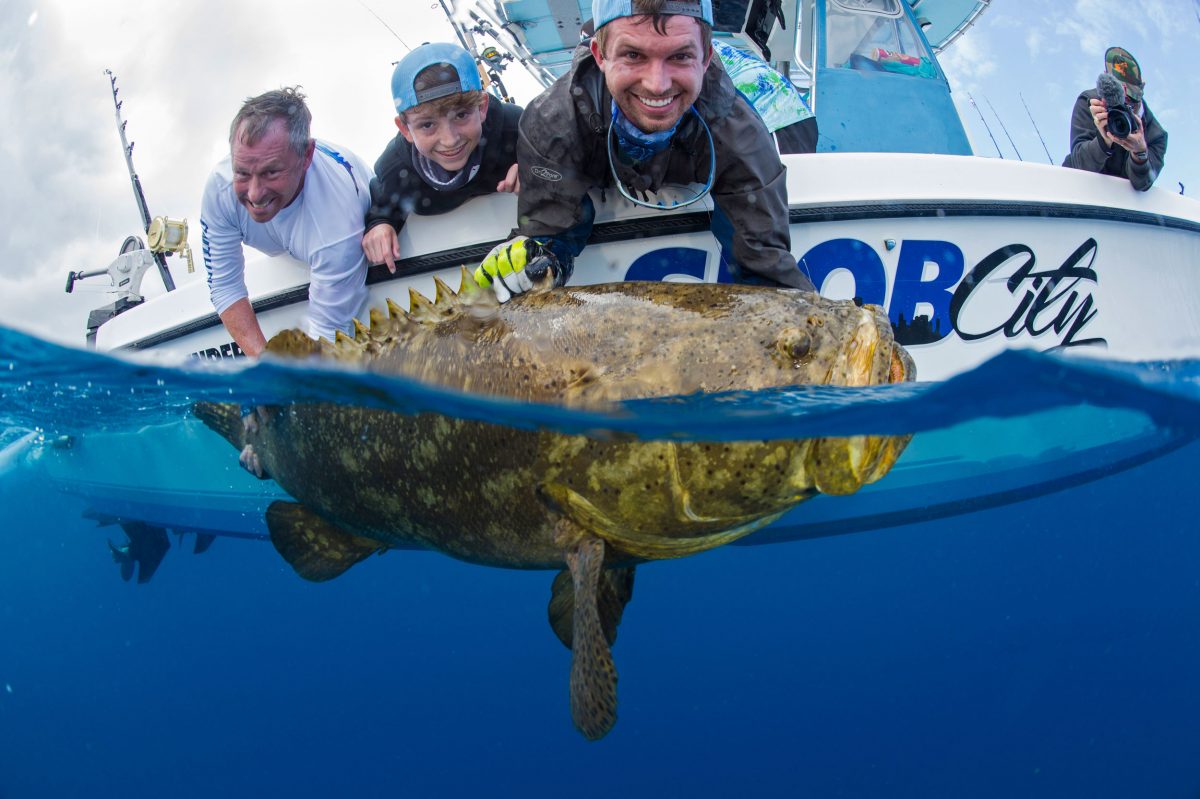 Anglers prepare to release a goliath grouper after catching it off Palm Beach County. 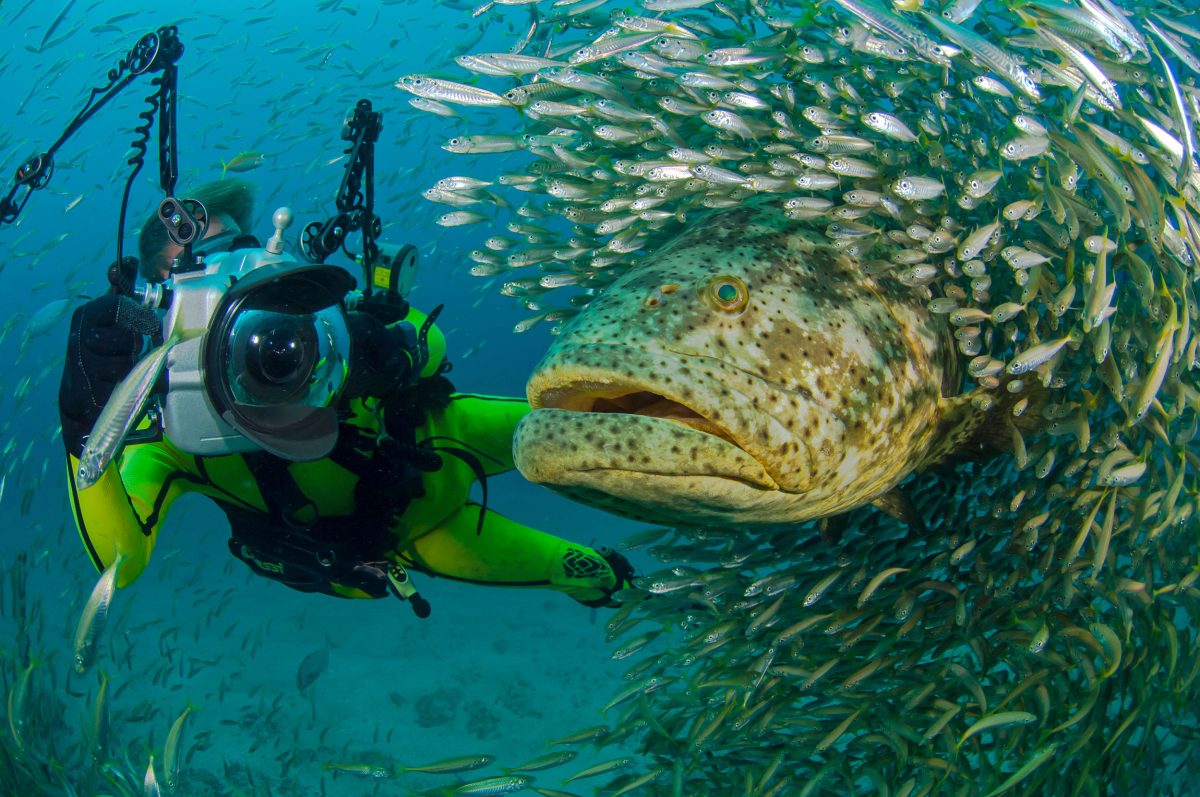 Photographer Douglas Seifert swims alongside a goliath grouper and a cloud of round scad near the Zion Train artificial reef off Jupiter. 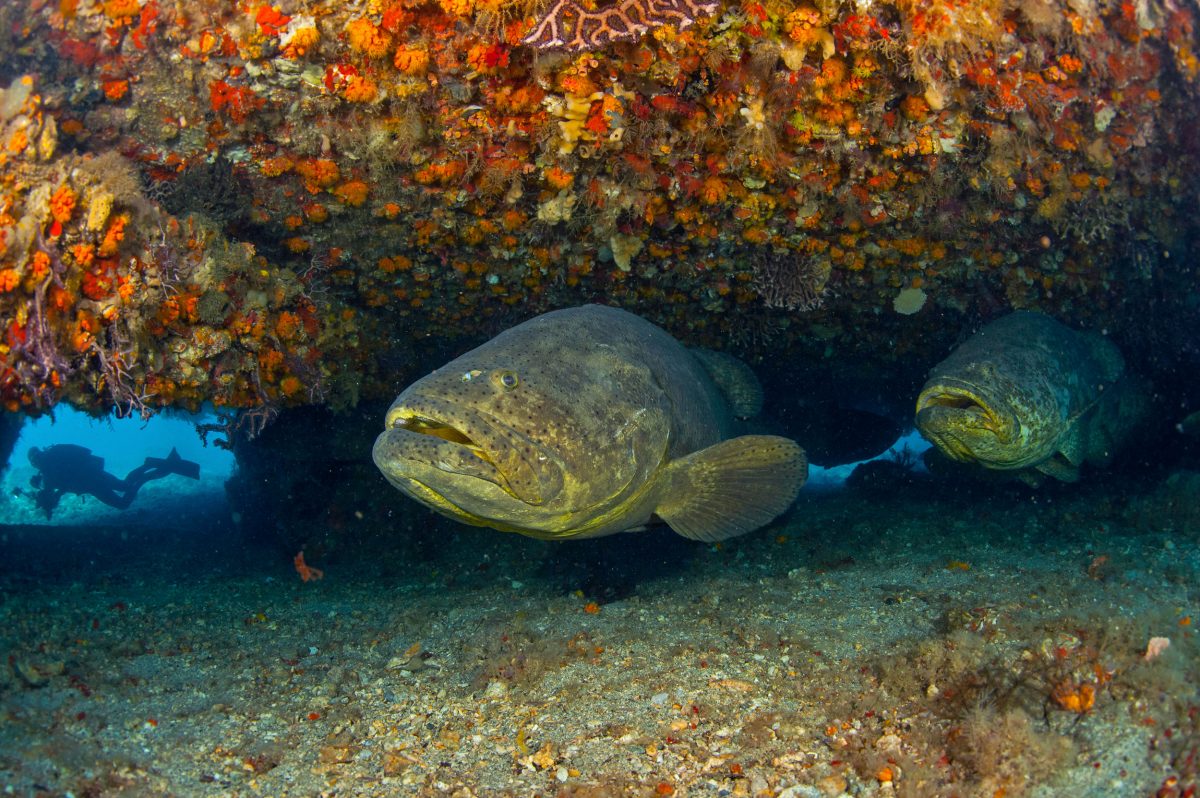 A pair of goliath grouper takes shelter underneath the Upside Down Barge off Singer Island while photographer Lazaro Ruda looks on. 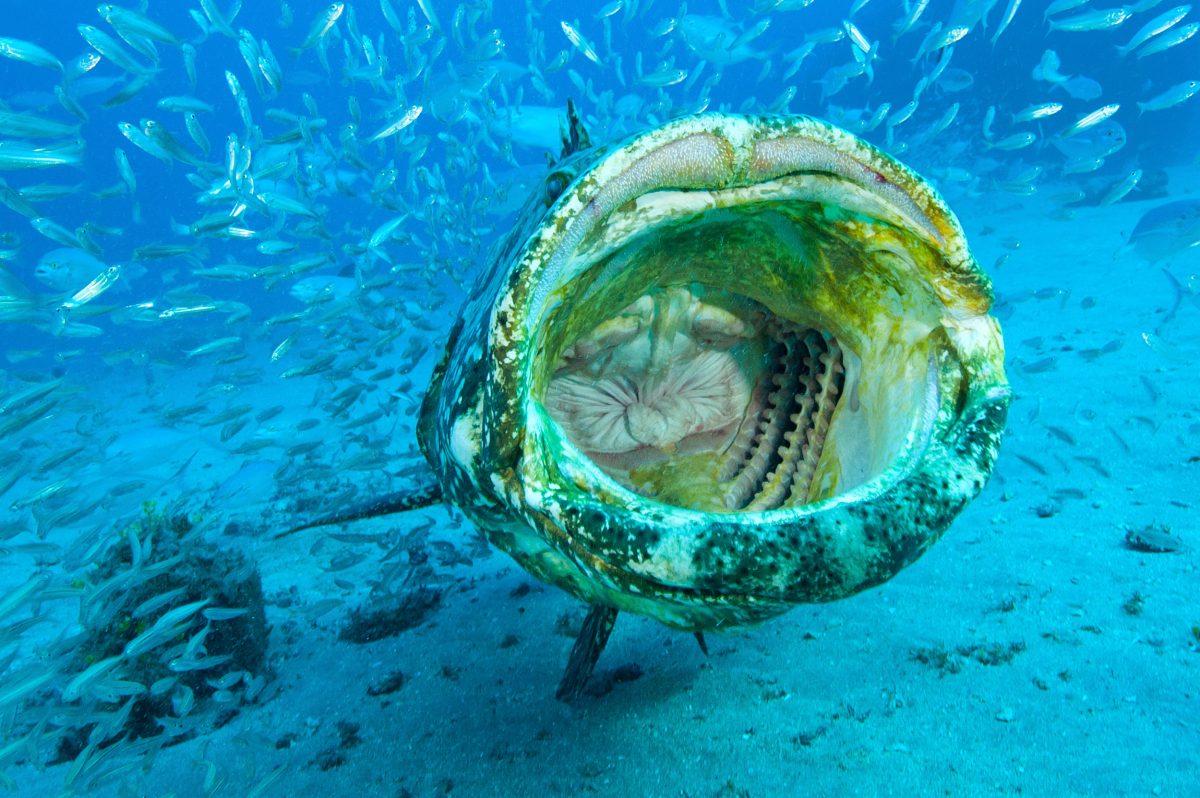 The goliath grouper uses its cavernous mouth to engulf prey whole rather than ripping and tearing like a shark.