A whale carcass hung off the Hakai Institute’s dock at Calvert Island, British Columbia, quickly attracted animals looking for a meal or some free real estate. Photo by Grant Callegari

When you have a tough cleaning job, you call in professionals. But what if a hovering horde of tenants in search of free rent moves in before the cleaning is done?

After a juvenile male humpback whale washed ashore on a remote beach along Calvert Island, British Columbia—the site of the Hakai Institute’s Calvert Island Ecological Observatory—in May 2019, the first order of business for scientists was to conduct a necropsy. Marine mammal specialists and a veterinary pathologist arrived to take measurements and tissue samples, with the intent of learning as much as they could about the seven-meter-long whale’s life and death. Once this was done, the question became what to do with the remaining flesh and bones.

More often than not, when a whale dies it sinks to the seafloor, where the carcass—known as a whale fall—delivers a pulse of nutrients to the local food web. This particular whale, delivered by the currents and tides, provided a rare opportunity for the Hakai Institute to preserve the skeleton for display, giving future visitors to the field station the chance to get up close to a giant of the sea.

But before the skeleton could be reassembled, the bones needed a deep cleaning. Expert skeleton articulator Mike deRoos and his team from Cetacea, his company based on Saltspring Island, British Columbia, which specializes in skeleton exhibits, moved in to remove most of the soft tissue. They left the flesh on the beach for a local pack of wolves, eagles, and other carnivorous creatures to continue feeding on. Then the team turned to nature for some fine detail work. They hung the bones, safely encased in thick nets, off the institute’s dock in Pruth Bay, to let the nearshore scavengers and decomposers strip and break down as much of the remaining flesh as possible. The sheltered waters around the dock are home to myriad species that thrive on dead and decaying organic matter, from crabs and shrimp, to sea stars and snails, to worms and fish. For months, the bones rested below the dock while the nearshore fauna feasted, meticulously cleaning the bones in the process.

When deRoos and his crew members Katie Ford and Claire Schiller hauled the bones to the surface 12 months later, they found that an amazing array of marine animals had moved into the free space alongside the cleaning crew. 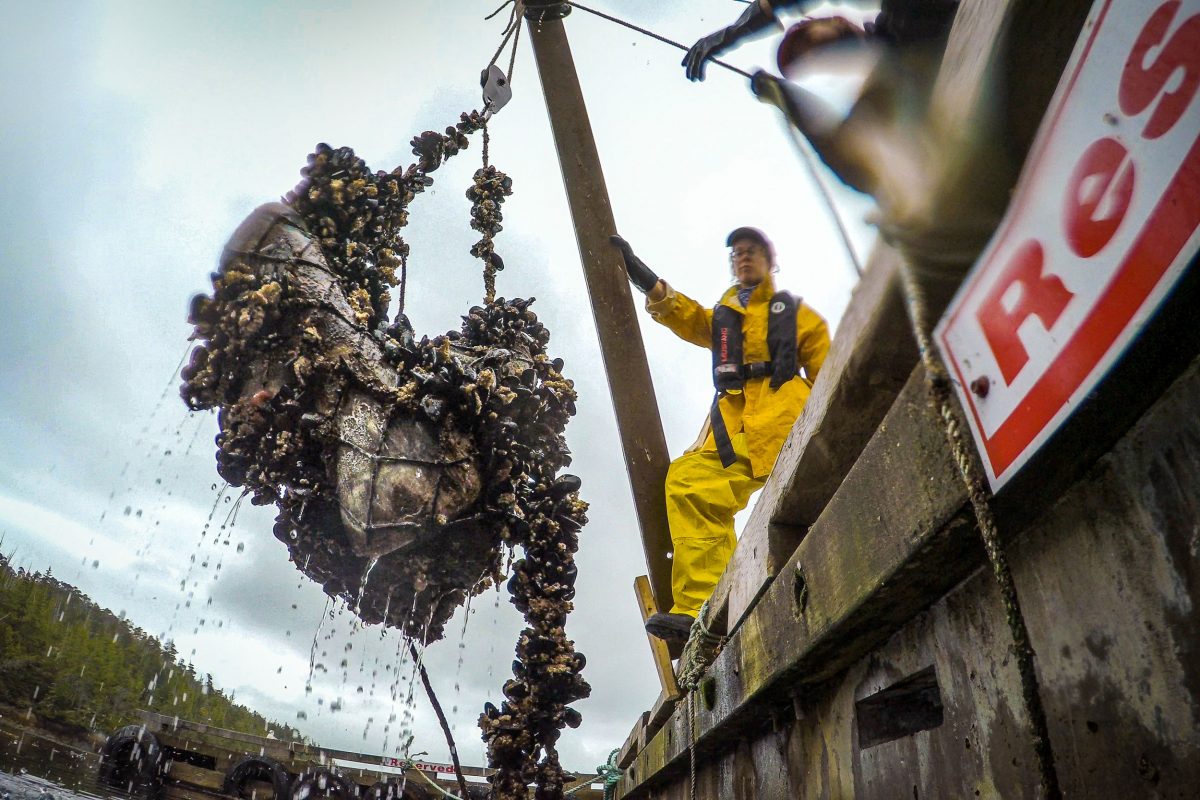 A thick growth of mussels, countless barnacles, and strings of seaweed covered both the bones and surrounding net. But that was just the beginning. 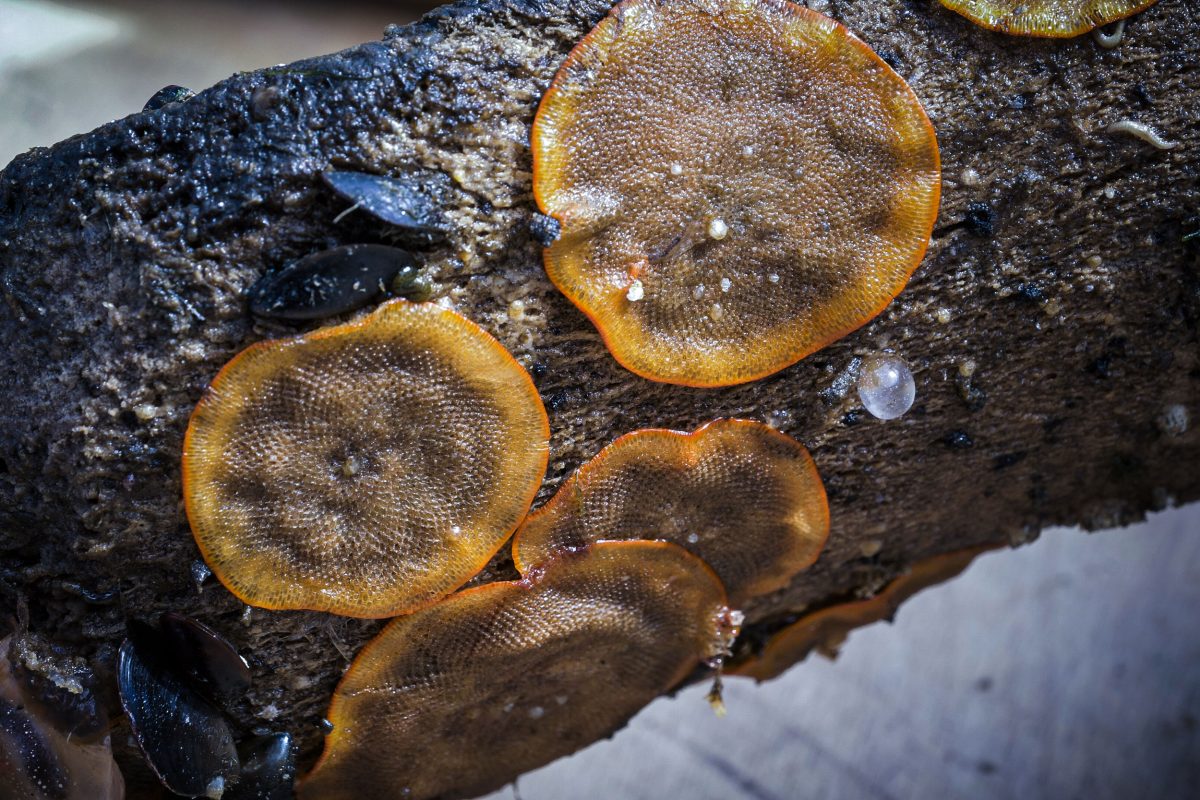 Whale bones are prime real estate for encrusting bryozoans. Many of these “moss animals” take up residence on hard surfaces, and their colonies aren’t picky about settling on rock, dock, or bone. 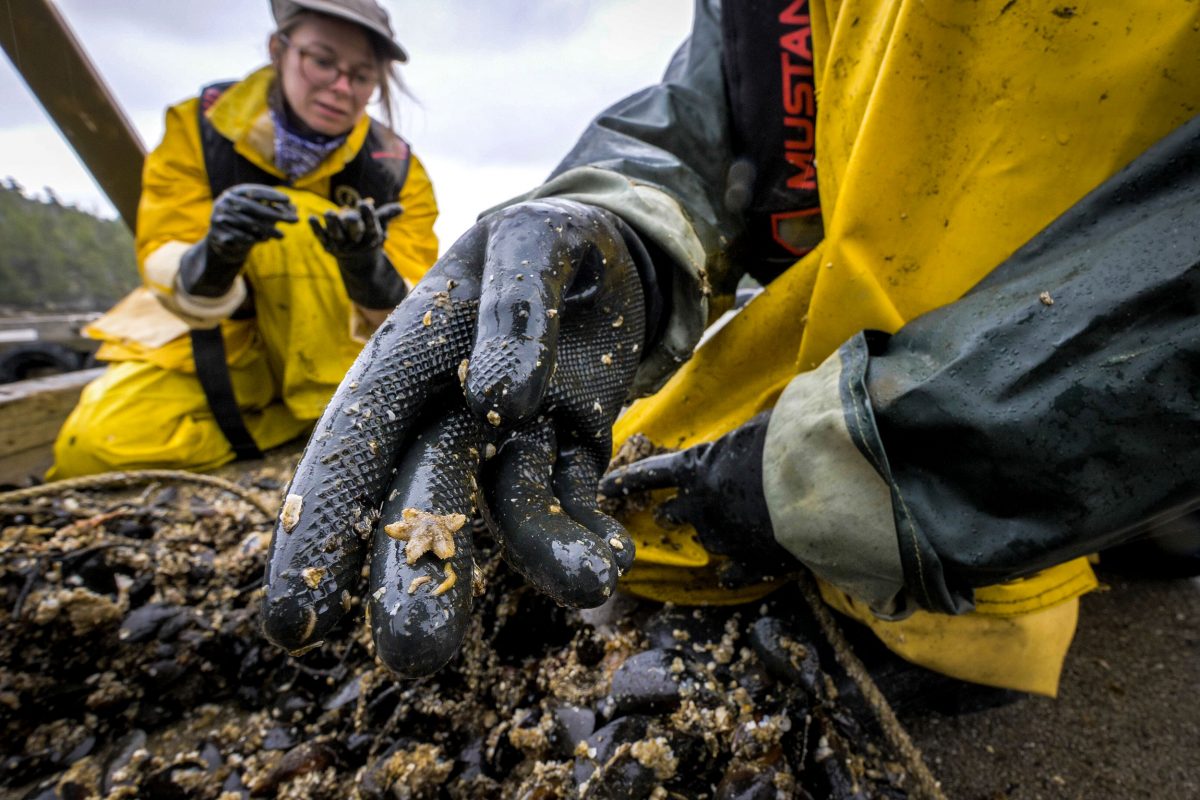 The crew plucked this tiny sea star from the plethora of mussels and barnacles. 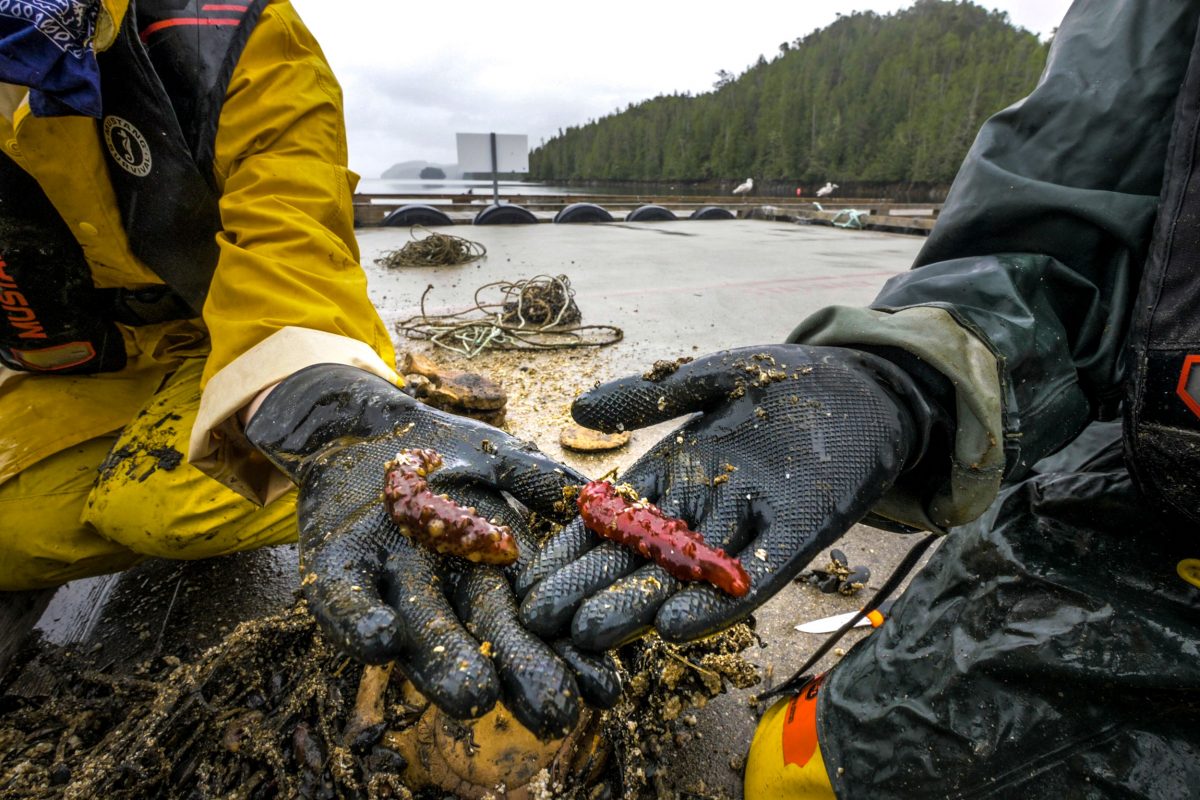 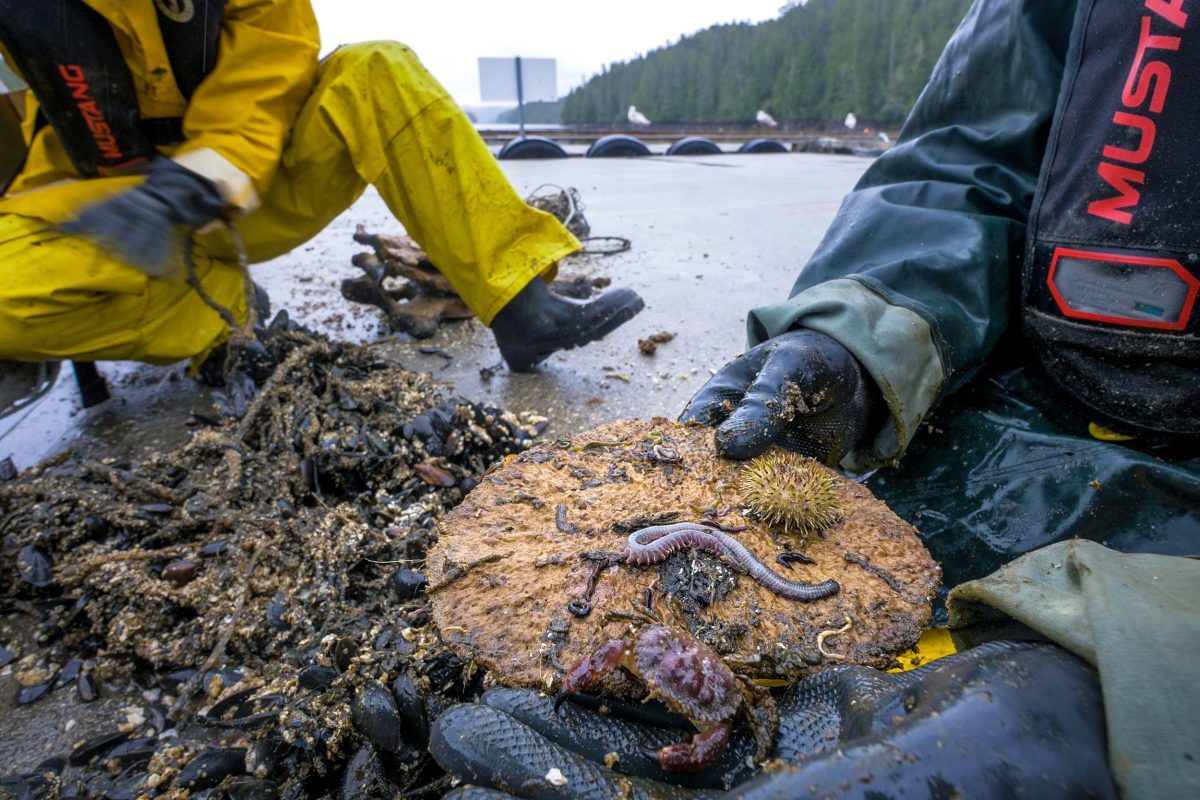 A pygmy rock crab and green urchin joined a plethora of worms on an intervertebral disc plate (yes, that’s the cross section of a humpback whale’s spine). The crab was impatient with the photo shoot. 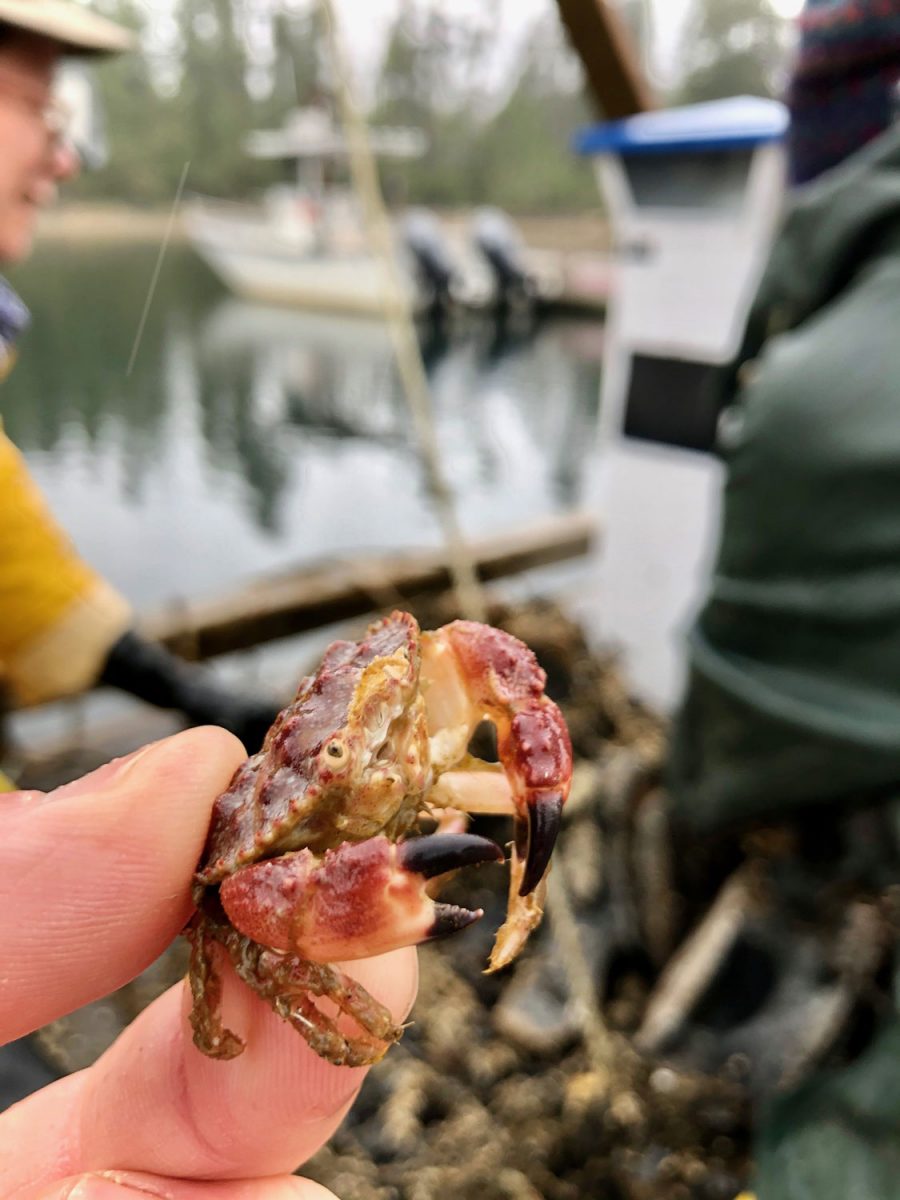 The team caught the pygmy rock crab for a close-up. Its stomach was likely full given the veritable buffet of barnacles, worms, and mussels on the bones. 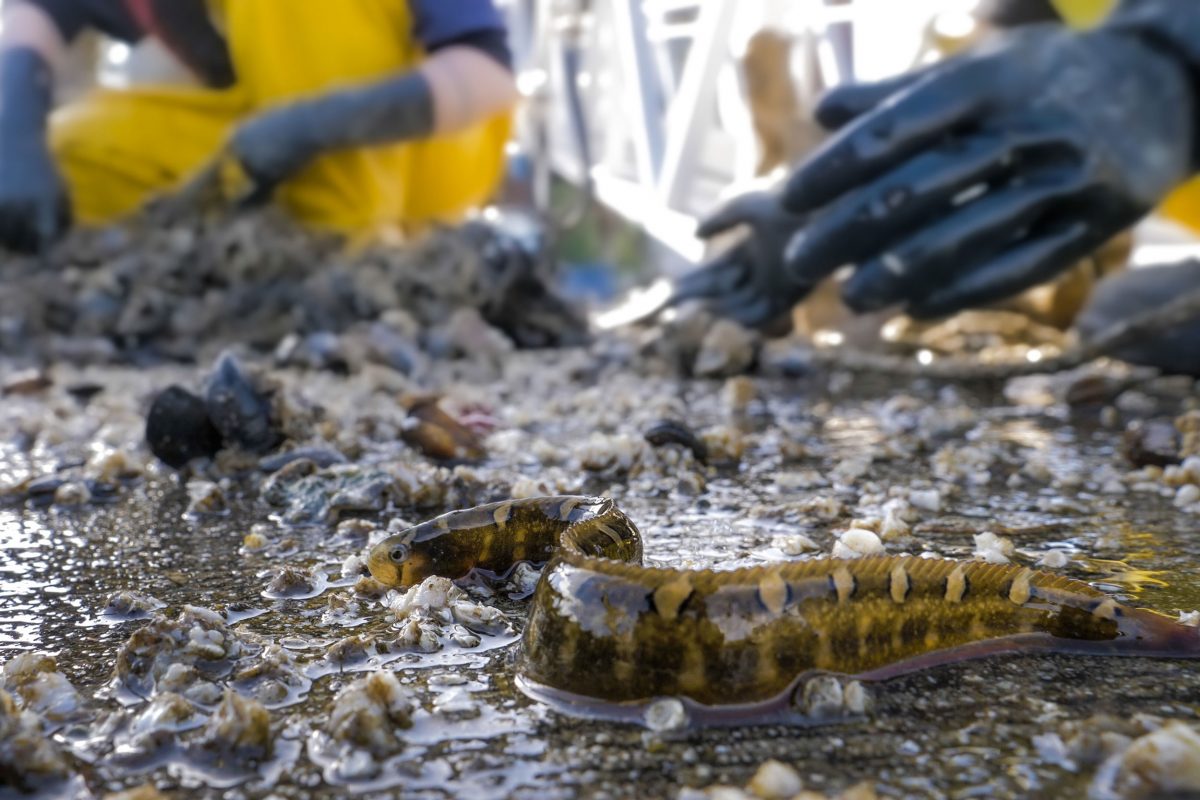 A crescent gunnel also set up shop on the bones. This wriggly resident isn’t bothered by a sudden transition to the terrestrial realm—like others in the gunnel family, it can breathe air when out of water and is often found sheltering under rocks in the intertidal.

And the worms! All shapes, sizes, and colors of worms wriggled out from under and between the collection of bones. 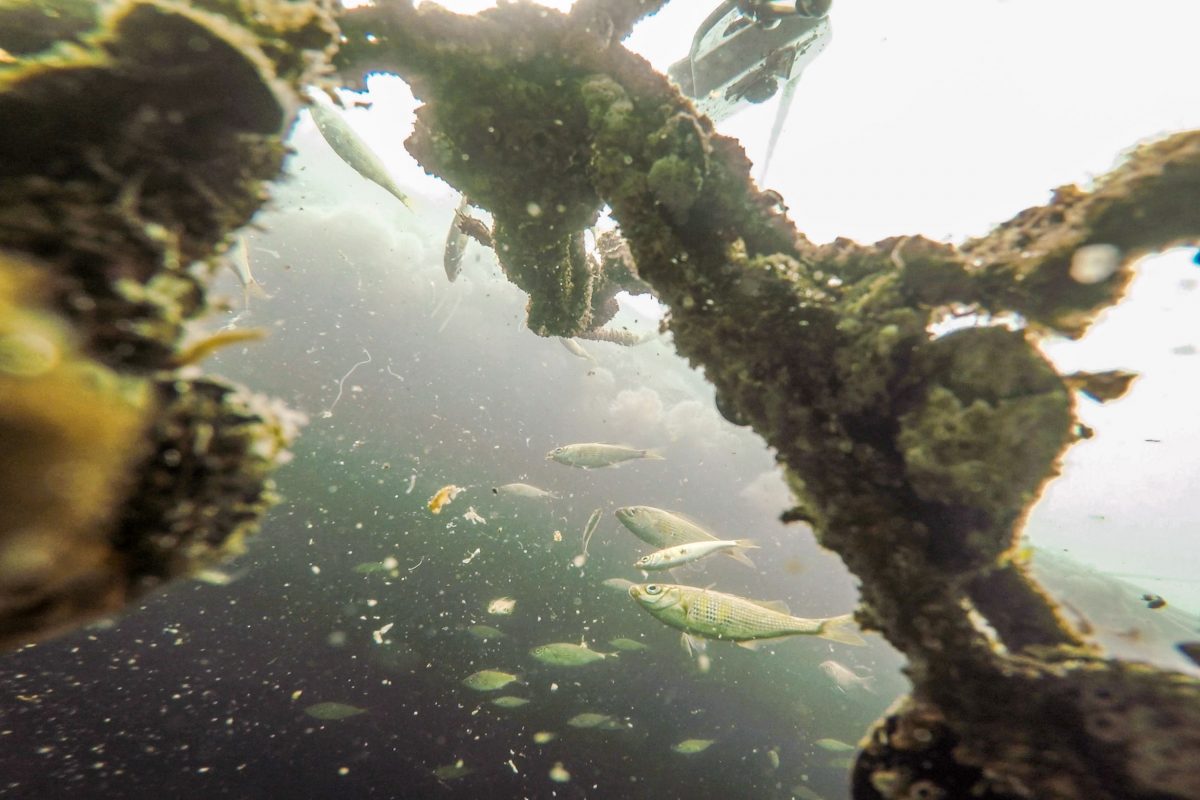 Meanwhile, back in the water, organic debris that fell from the bones as they were lifted from the ocean and cleaned attracted a school of shiner perch, which made quick work of the sudden feast. 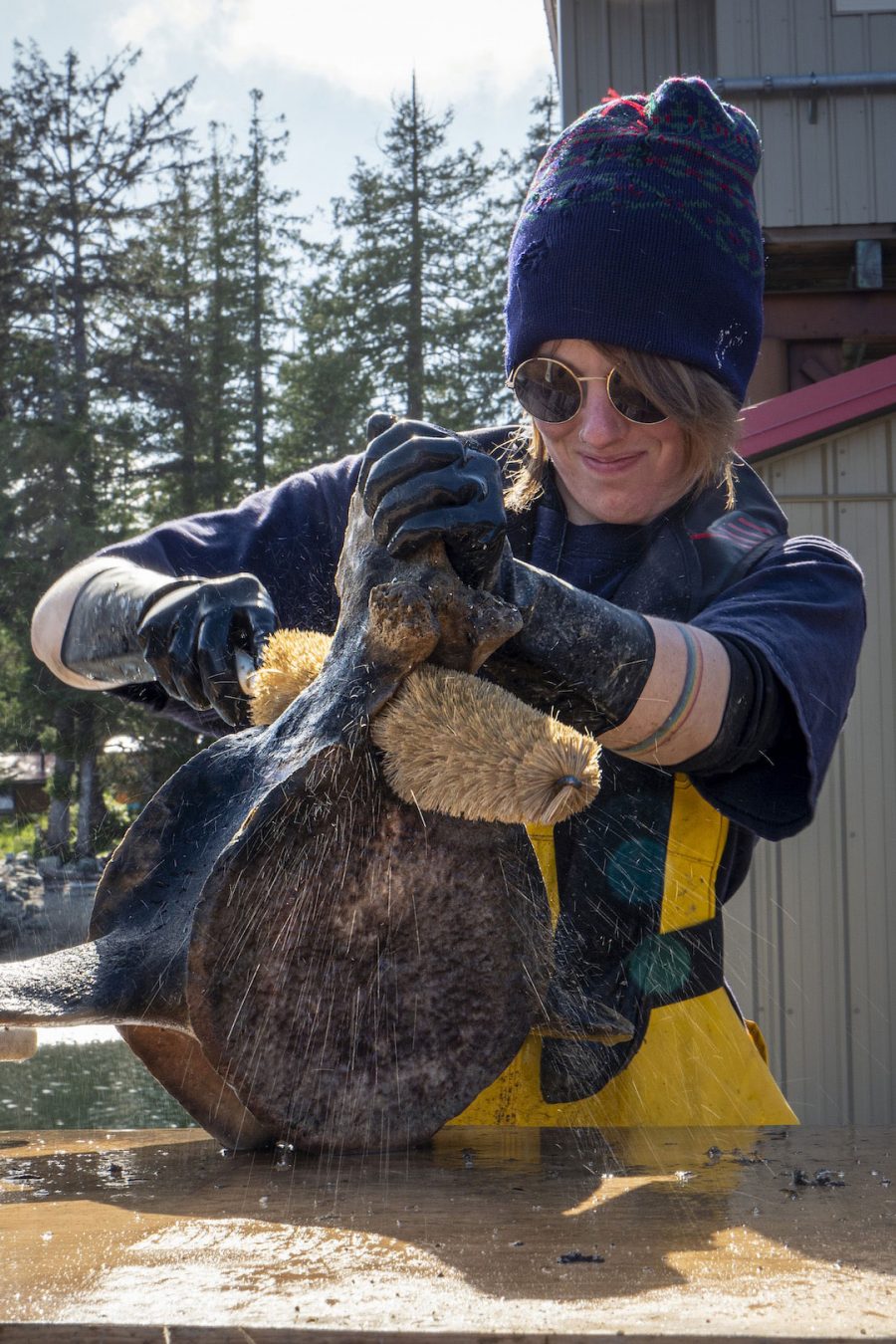 It took a lot of additional elbow grease to remove the remaining squatters. 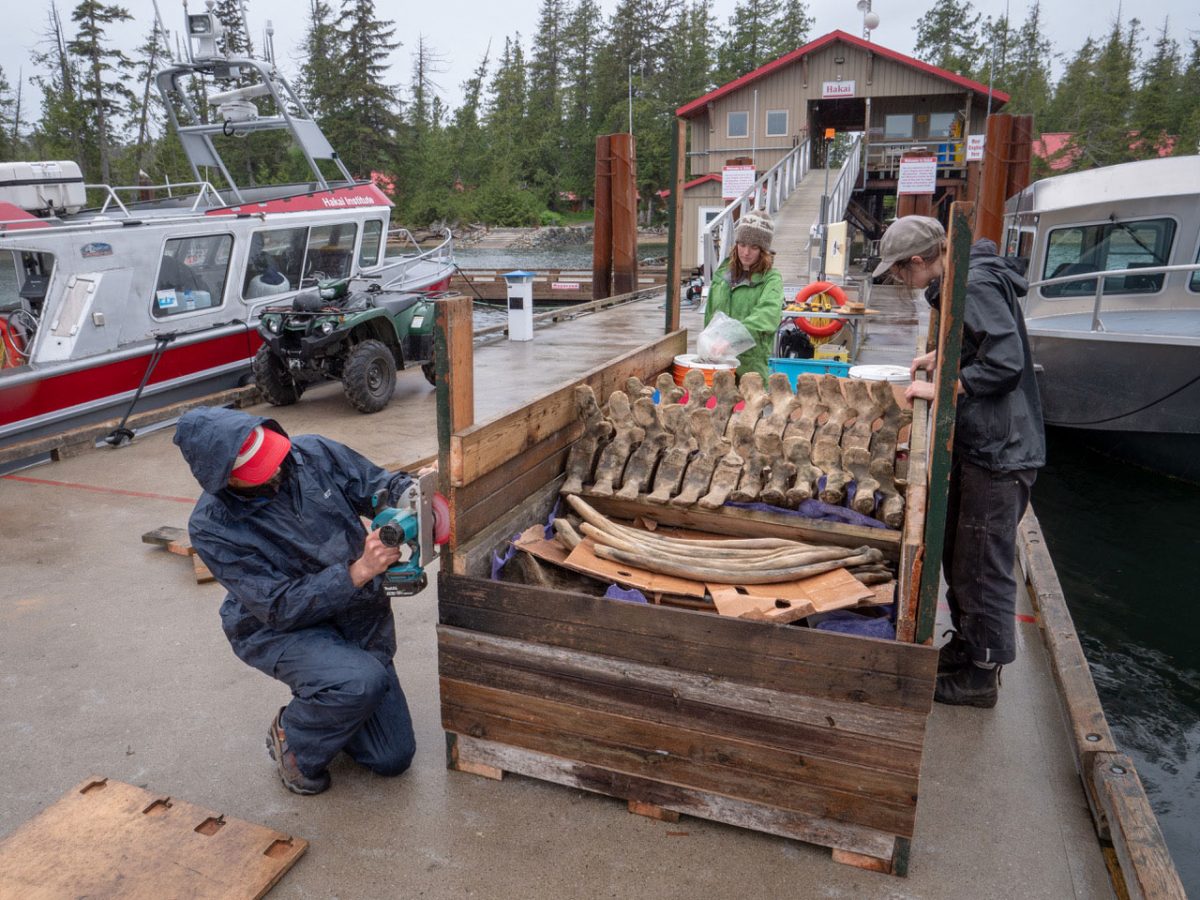 Once the bones were clean, the crew packaged them up and barged them south to deRoos’s Saltspring Island workshop for the next stage in their long cleaning saga—a full degreasing, a series of steps that took more than half a year. 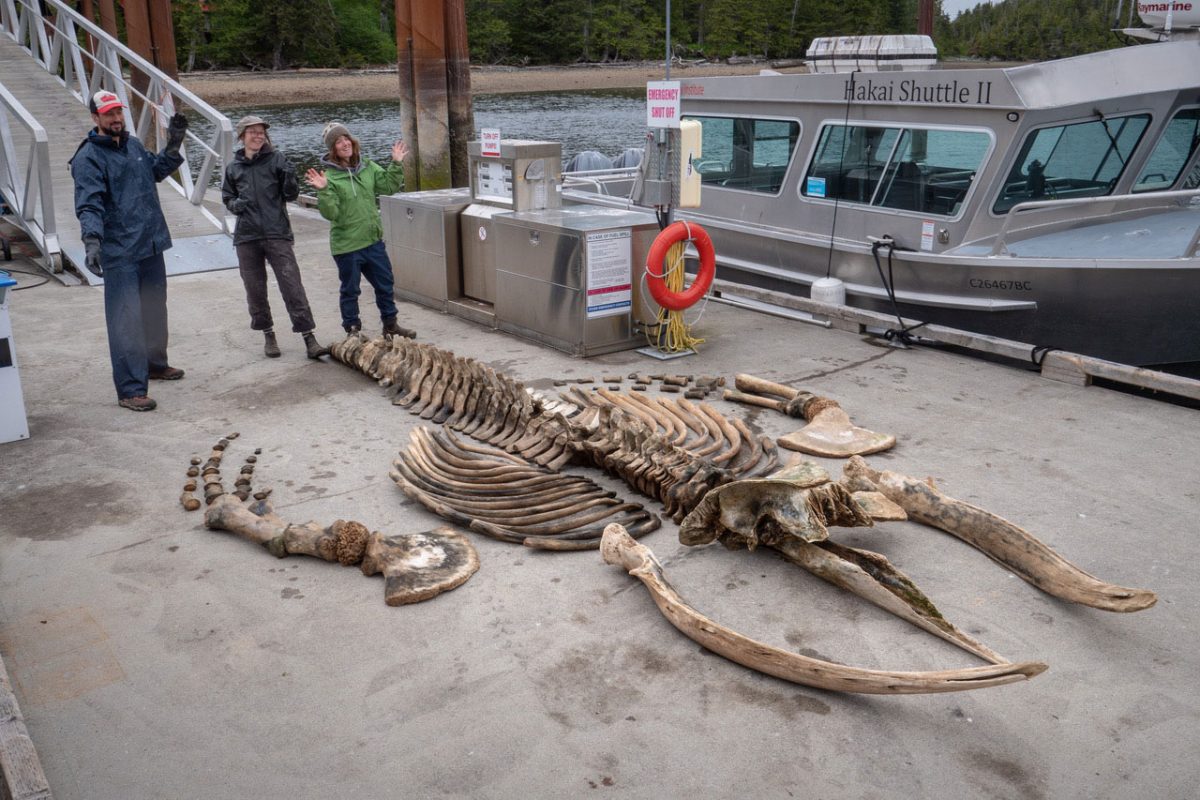 Now that the bones are clean, deRoos and his team will begin another multistep process to reassemble the skeleton, beginning with repairs where the underwater decomposition, prolonged by the pandemic, went a bit too far. The young whale’s bones are soft and were prone to deterioration from marine organisms, such as bone-eating worms, as well as simple mechanical wear and tear from a year underwater. While deRoos views this deterioration as a part of the skeleton’s story, a certain level of repair is still necessary. Once the bones have been repaired and reinforced with an archival resin, deRoos and his team will reassemble them in segments and send them by barge back to Calvert Island, where they’ll fully reconstruct the skeleton in the Hakai Institute’s main hall.

A version of this article first appeared on the Hakai Institute’s website.