An ExxonMobil complex in Everett, Massachusetts—currently at the center of a lawsuit about environmental safeguarding—is one of many industrial sites along the US East Coast perched beside rising seas. Photo by Alex MacLean

The photography in this story was supported by the Pulitzer Center.

When Alex MacLean wants to see how buildings and open spaces in a city relate to each other, he rents a small plane, taxis down a local airport’s runway, and cruises low—at somewhere between 150 and several thousand meters. As the elements line up the way he wants, MacLean swings open the hinged window in his door and trains his camera on the ground. For several seconds, the plane—sometimes while spiraling downward—flies itself, as MacLean methodically frames his shots.

Since long before drones democratized aerial photography, MacLean, who trained as an architect, has taken pictures from the sky, helping urban planners and other architects visualize ideas and document projects; but he also pays keen attention to how his aerial perspective can draw attention to what he sees as the creeping environmental degradation of the Earth. Recently, he took a multi-flight solo tour of the US East Coast from Maine to Florida over the course of a year, seeking perspective on the expected impacts of sea level rise.

He had known, of course, that rising waters pose serious risks to coastal states, but he was unsettled by the scale of vulnerability he discovered everywhere he flew: “There’s going to be a huge economic burden coping with all the problems that come with sea level rise.”

The US Global Change Research Program indicates that global sea level has risen between 16 and 21 centimeters since 1900. It’s virtually certain the seas will keep on rising, and at an accelerating rate. The complexity of predicting how quickly polar ice sheets will shed mass into the oceans makes it hard to forecast with precision how quickly the water will go up. But the latest US National Climate Assessment concluded that, at its extreme, global sea level could rise by as much as 2.4 meters by the end of the century.

Sea level rise varies from place to place due to many factors, including changes in currents, such as an apparent slowdown underway in the Gulf Stream, and vertical movement of the Earth’s crust. North America is still adjusting to the retreat of glaciers 12,000 years ago. Northern New England, for instance, has been rebounding since it was freed from the weight of glaciers after the last ice age, counteracting sea level rise.

In North America, the Atlantic coast is at greatest risk from higher seas. A substantial fraction of the shoreline slopes gently to the ocean with relatively few protective bluffs. And the region has hundreds of kilometers of low-lying sandbar-like barrier islands, some densely developed. Both the US East and Gulf Coasts endure storm surges from perennial hurricanes.

During his flights between Maine and Florida, MacLean noticed something he hadn’t given much thought to before: thousands of industrial sites and vast amounts of critical infrastructure perched perilously close to the water’s edge, not far above the current high water level.

He flew by nuclear power plants, electric power lines, and airports. Many kilometers of track along a popular rail route between Boston, Massachusetts, and Washington, DC, closely hug the shore. A flood could cause a major disruption. He couldn’t see it, but MacLean also flew over kilometers of buried fiber optic cable carrying high-speed internet signals, also at high risk of flooding. A recent study found that in the next 15 years, sea level rise will put more than 6,500 kilometers of communications lines never meant to be underwater for long periods of time at risk of disabling floods.

Wherever he went, he saw sewage treatment plants. They’re important amenities for protecting public and environmental health, and they’re often located right along the coast, where they discharge treated effluent. But wastewater plants can’t work if they’re underwater. A study published last year found that with an increase in sea level of about 90 centimeters—a rise likely to occur well before the end of the century—162 such plants currently serving 10 million people in coastal states will no longer be operable. Michelle Hummel, an engineering professor at the University of Texas at Arlington and the lead author of the paper, says people often fixate on flooding of their homes, but from a national perspective, five times as many people will lose service when sewage plants fail than will experience direct flooding. “We need to be thinking more broadly about who is going to be impacted by sea level rise and how it will affect their communities,” she says.

During his project, MacLean’s winged shadow regularly slipped across oil industry infrastructure, including myriad tank farms and sprawling refineries built for convenient access to tankers. ExxonMobil’s petroleum terminal in Everett, Massachusetts, just a 15-minute flight from his own home in a Boston suburb, is an example. The site has been the subject of a drawn-out lawsuit over the possibility that a storm made more dangerous by higher sea level could wash toxic chemicals into nearby Boston Harbor. The Conservation Law Foundation, the public interest firm behind the suit, argues that ExxonMobil’s plans for preventing a chemical spill must take into account the effects of sea level rise and other environmental conditions. Otherwise, attorney Christopher Kilian asserts, the company is in violation of federal acts, such as the Clean Water Act. ExxonMobil counters that chemical safety rules don’t include any such requirements.

The case is expected to stretch on for at least another year, and could set a far-reaching precedent. If the judge overseeing the case ultimately decides against the company, thousands of industrial plants near the coast could be held responsible for safeguarding their operations against the impacts of climate change.

Whatever the outcome of the court case, much of the public and private infrastructure MacLean surveyed will either have to be armored against flooding or shuttered, cleaned up, and moved in the coming decades. The National Climate Assessment concludes that unless significant progress is made cutting back on planet-warming gases by the end of the century, losses to the US economy could reach hundreds of billions of dollars each year. The monumental task of responding to sea level rise will be just one part of global warming’s incalculable price tag. 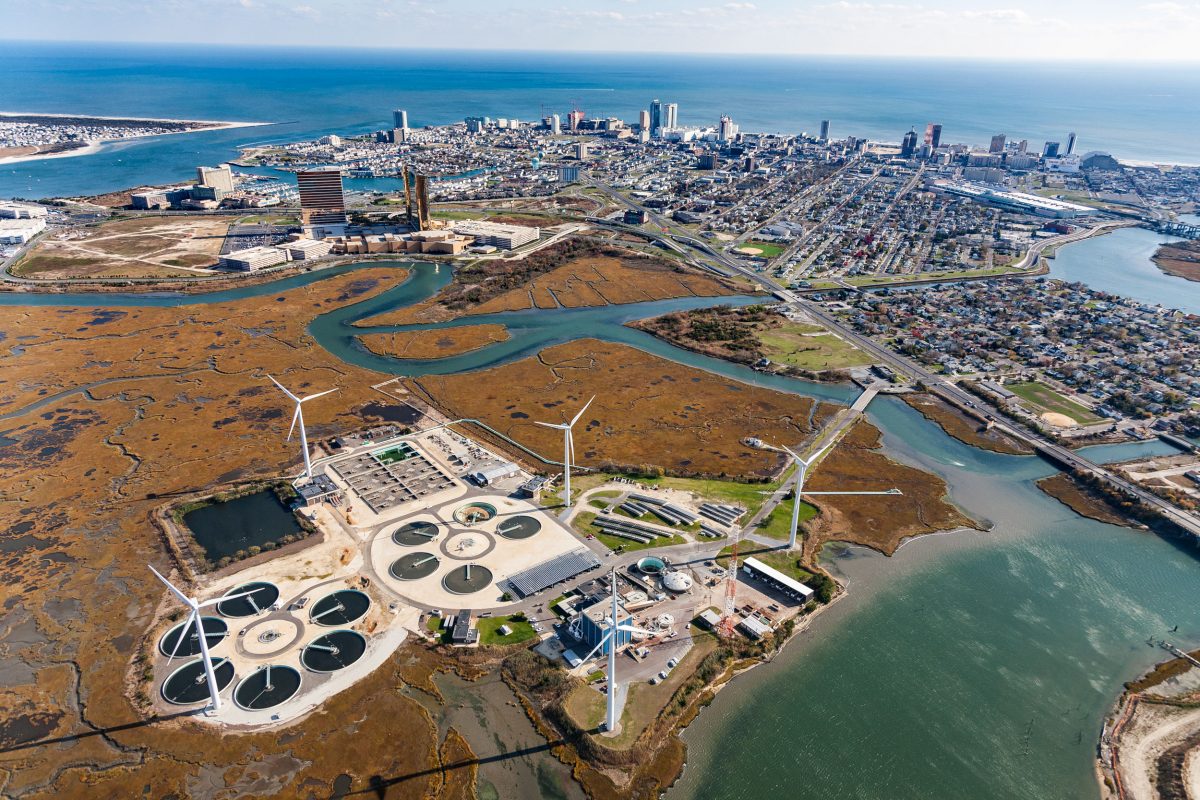 The Atlantic County Utilities Authority wastewater treatment plant in New Jersey can process 151 million liters of sewage from Atlantic City (in the background) and 13 nearby communities every day. Water came within 15 centimeters of flooding the facility during Hurricane Sandy in 2012. The utilities authority is building a US $3.7-million sea wall to protect the plant in the future. 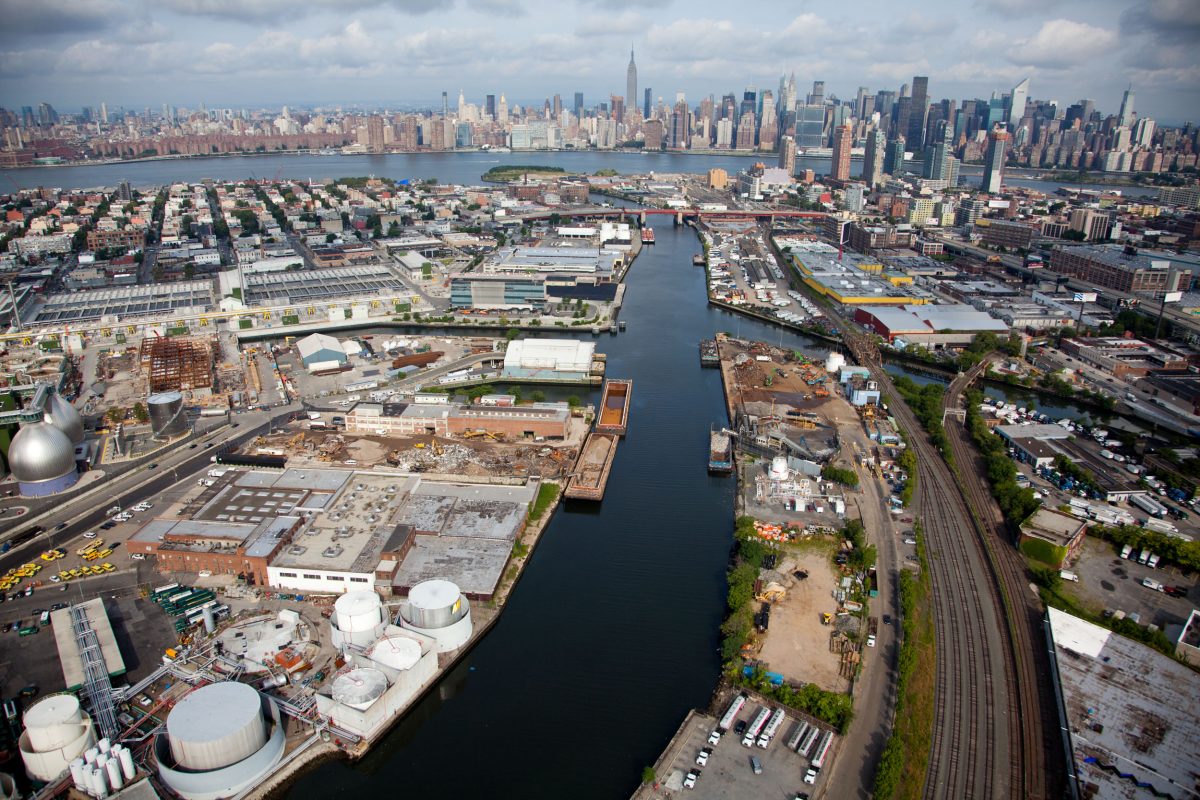 Newtown Creek, a 5.5 kilometer-long tributary of New York’s East River, is one of the most heavily industrialized and polluted sites in the United States. Water overflowed the armored banks of the waterway during Hurricane Sandy, spreading untreated sewage and toxic chemicals into city streets and basements. The Newtown Creek Wastewater Treatment Plant (the silver egg-shaped tanks on the far left), the largest of New York’s 14 sewage processing facilities, was responsible for the sewage—it released 550 million liters after becoming submerged. 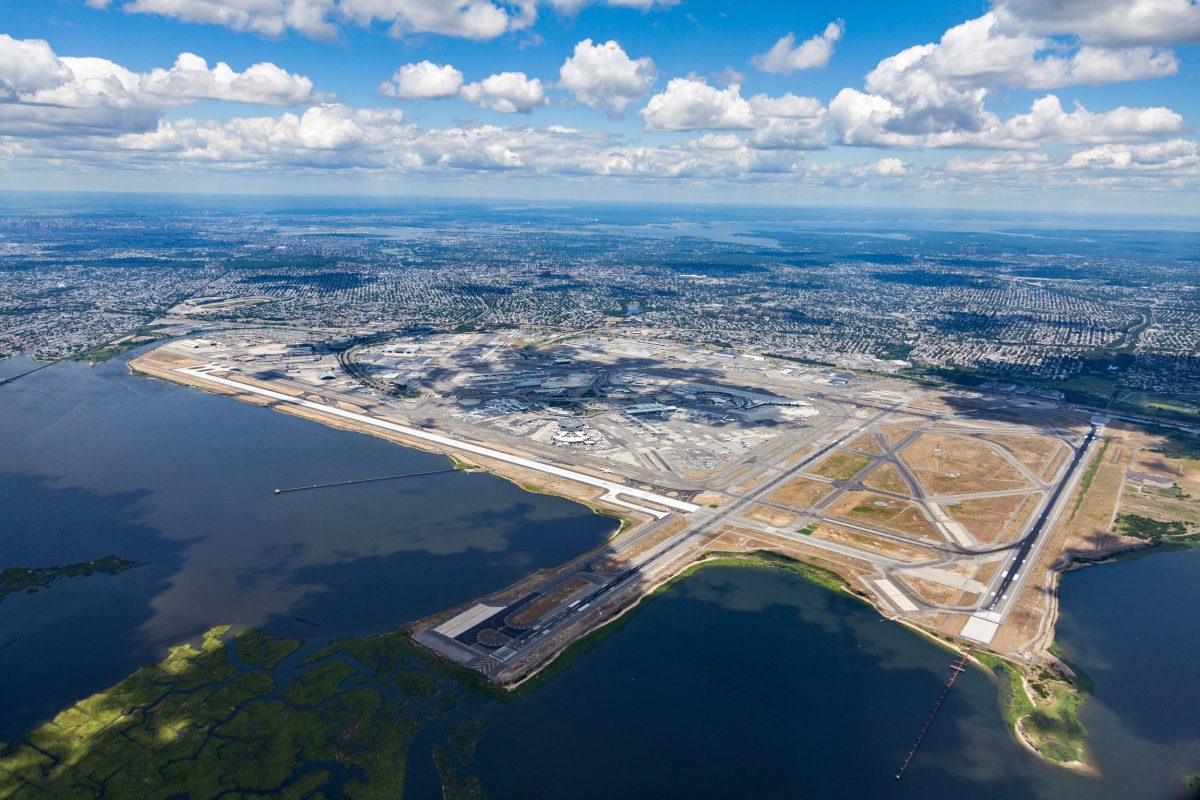 The three main commercial airports serving New York are all built in low-lying coastal regions at great risk of flooding from the combination of storm surges and higher sea level. John F. Kennedy International Airport, shown here, sits high enough to avoid flooding from sea level rise of 1.8 meters. Still, a report by a regional planning association says that the airport’s flood barriers will have to be “hardened for the more severe future storm surges.”

LaGuardia Airport, serving 28 million passengers each year, will flood at some high tides with only a 30-centimeter rise above today’s sea level, an amount that is expected as soon as 2030. With an increase of 60 centimeters, one of its runways and portions of its terminals will be flooded permanently. 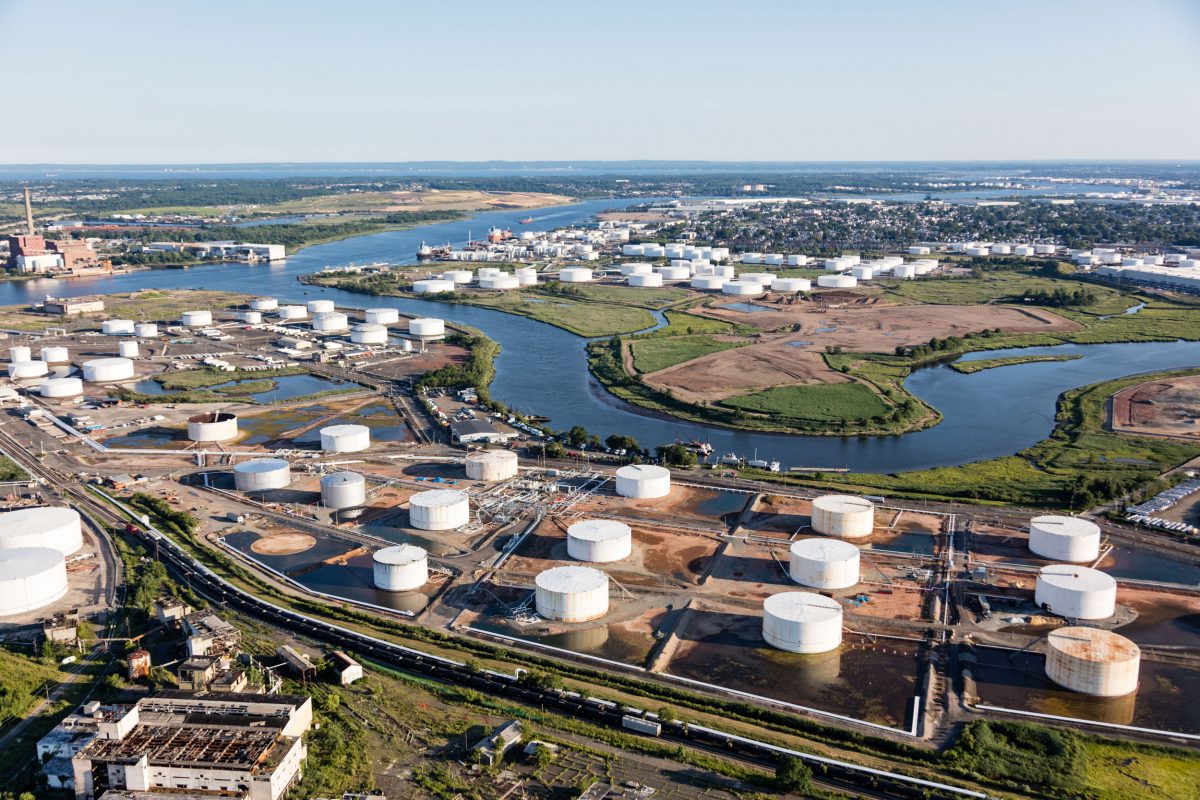 Hundreds of white petrochemical storage tanks sit on concrete pads in the wetlands near Elizabeth, New Jersey. Tanks in the foreground, owned by Kinder Morgan, store up to half a million barrels of ethanol for blending with gasoline. Another Kinder Morgan facility, in the background, was flooded during Hurricane Sandy and spilled nearly 38,000 liters of biodiesel. MacLean wonders whether the site will be thoroughly cleaned of pollutants when sea level rise makes it untenable as a tank farm. 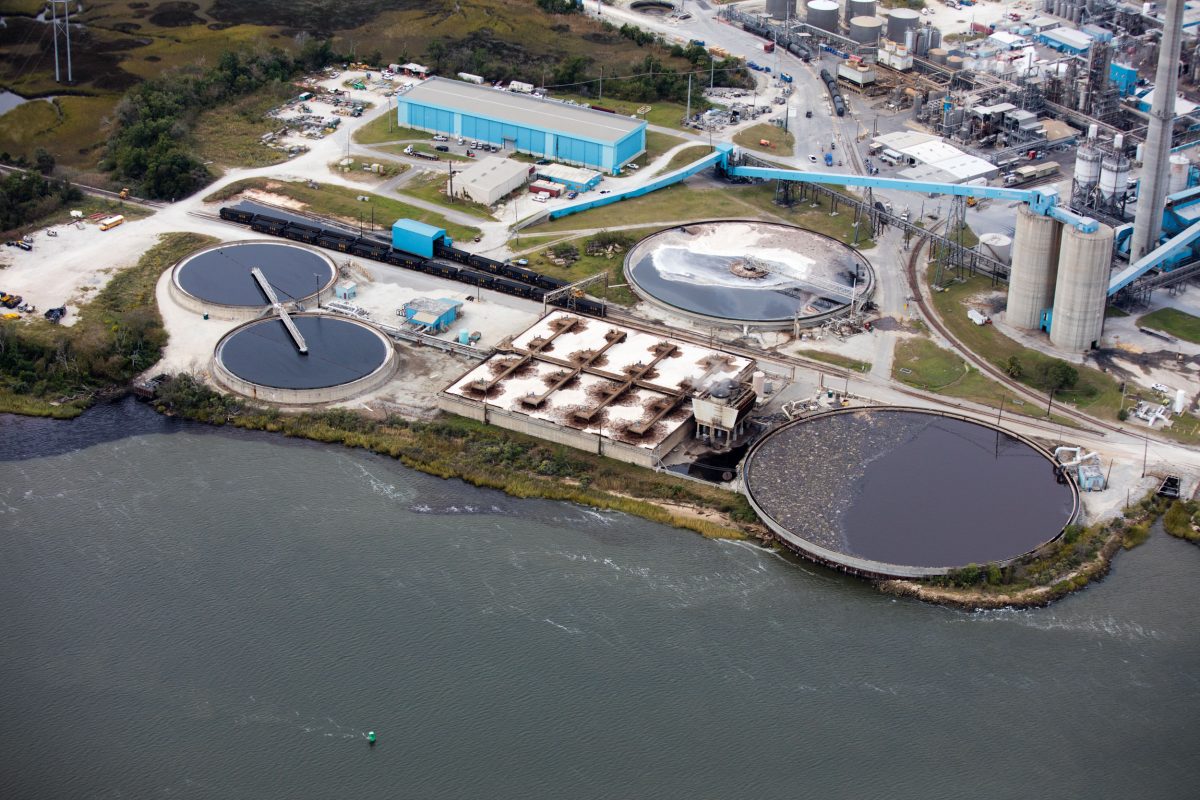 This wastewater treatment plant in North Charleston, South Carolina, is part of a facility owned by WestRock, a manufacturer of corrugated cardboard and other paper products. The cities of North Charleston and Charleston spread across a peninsula that was built on a wetland beginning 350 years ago. The peninsula is bounded by the Ashley and Cooper Rivers, just inland of the Atlantic, and residents have battled chronic flooding since the beginning. Industrial sites replacing wetlands in the region are making the shoreline more impermeable, increasing flooding. Rising water is compounding the problem. 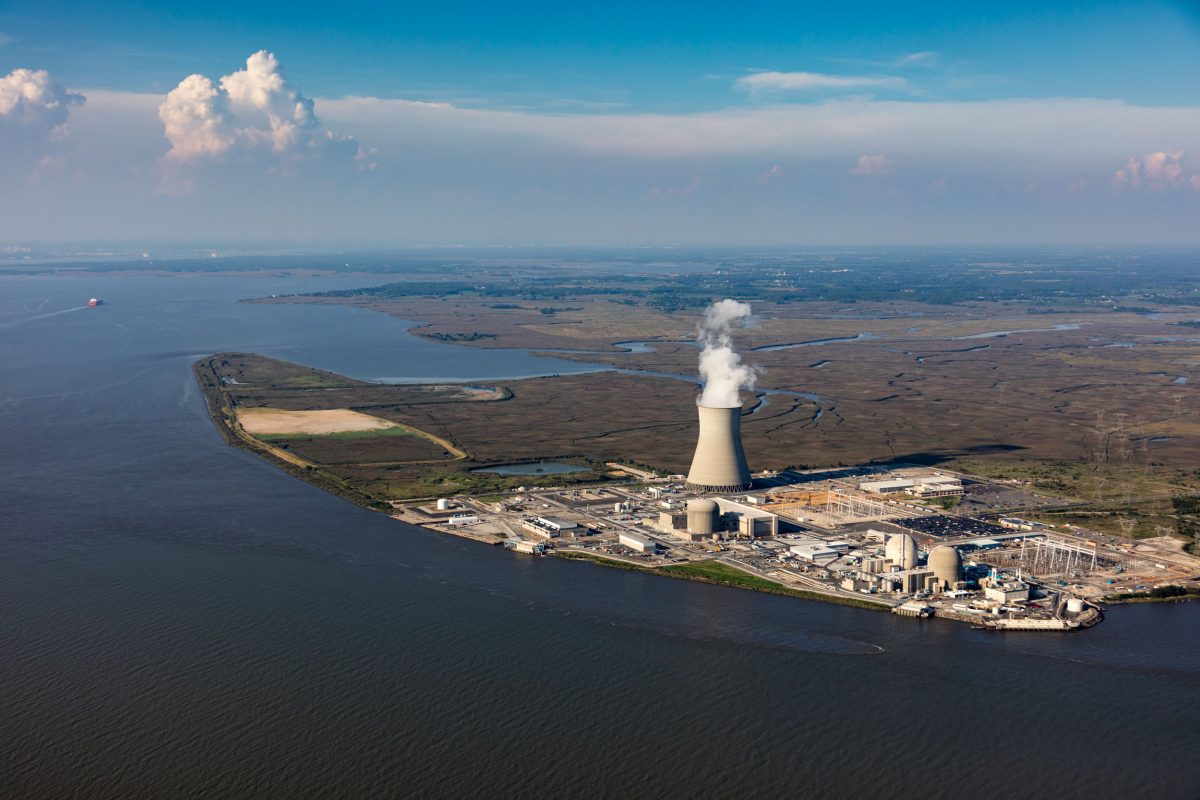 The nuclear disaster in Fukushima, Japan, in which a six-reactor compound was struck by a tsunami, proved the vulnerability of reactors to flooding. Three of the units were destroyed. Nine US nuclear power plants are within about three kilometers of the ocean. Independent experts consider four of them, including two shown here—the Hope Creek Generating Station (the cooling tower billowing a cloud of steam) and Salem Nuclear Generating Station (the double domes on the right) in Lower Alloways Creek Township, New Jersey—especially vulnerable to sea level rise and storm surges. Fortunately, the risk of a tsunami, though not zero, is considered low on the US east coast. 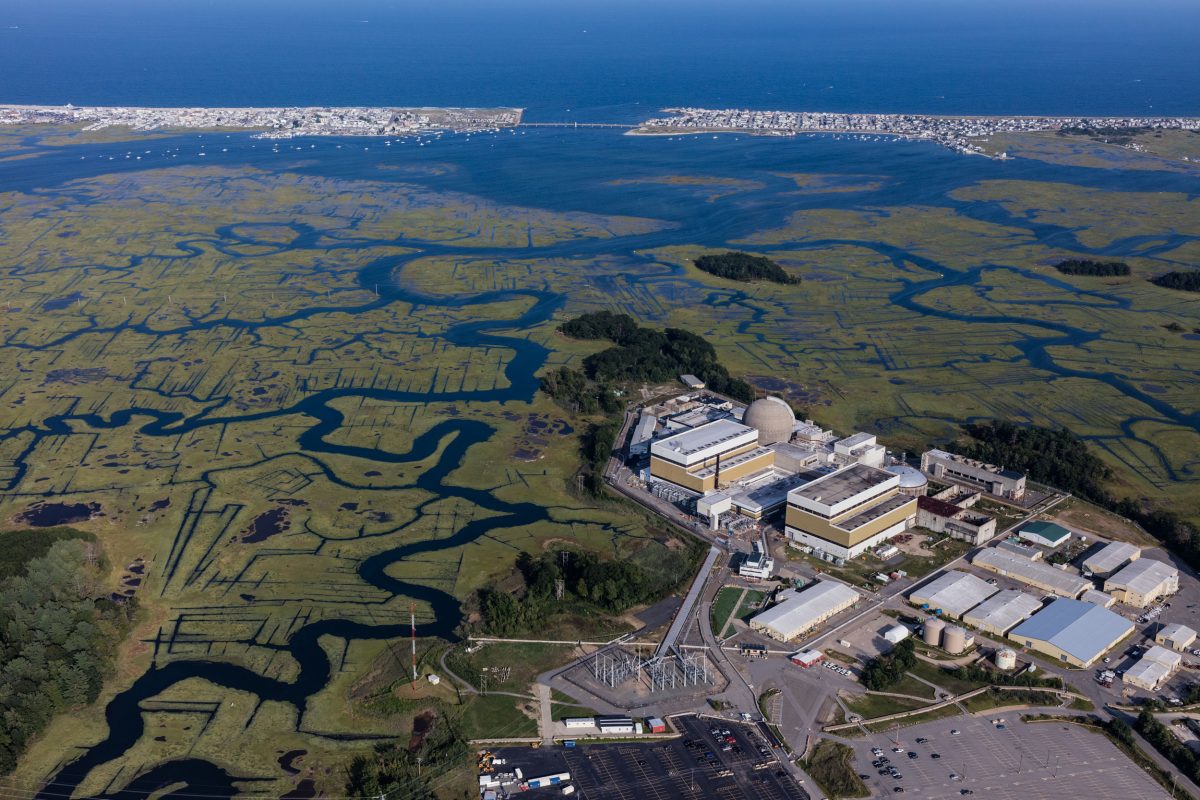 The Seabrook Nuclear Generating Station, built alongside a marsh on the coast of New Hampshire, is considered one of the four reactors most at risk of flooding in the United States. 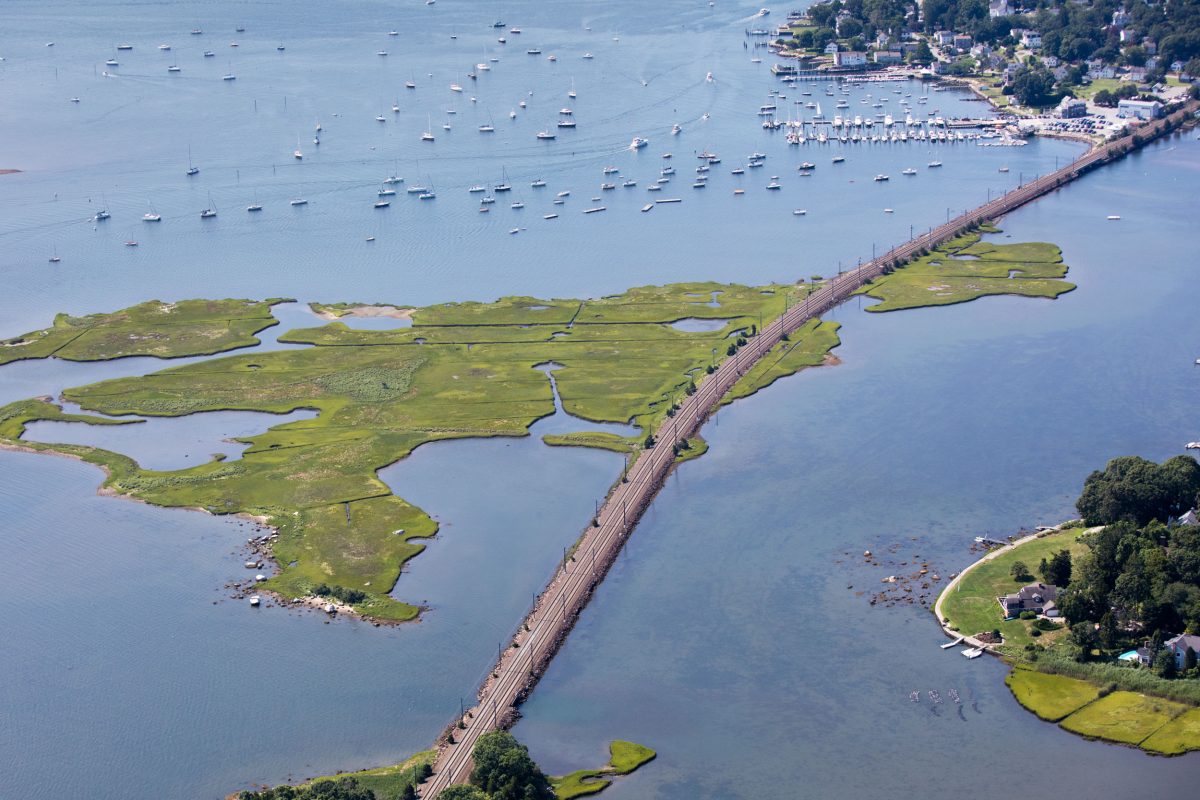 The Northeast Corridor Line, a 735-kilometer stretch of rail line, often follows the shoreline, such as here, near Groton, Connecticut. Soon the route could be beset by episodes of submersion that would erode the trackbed and disable signaling equipment, disrupting travel for the approximately 12 million passengers who rely on it each year. A recent study of a 16-kilometer segment owned by Amtrak near Wilmington, Delaware, proposed a $78-million package of flood barriers that could be erected during storms. 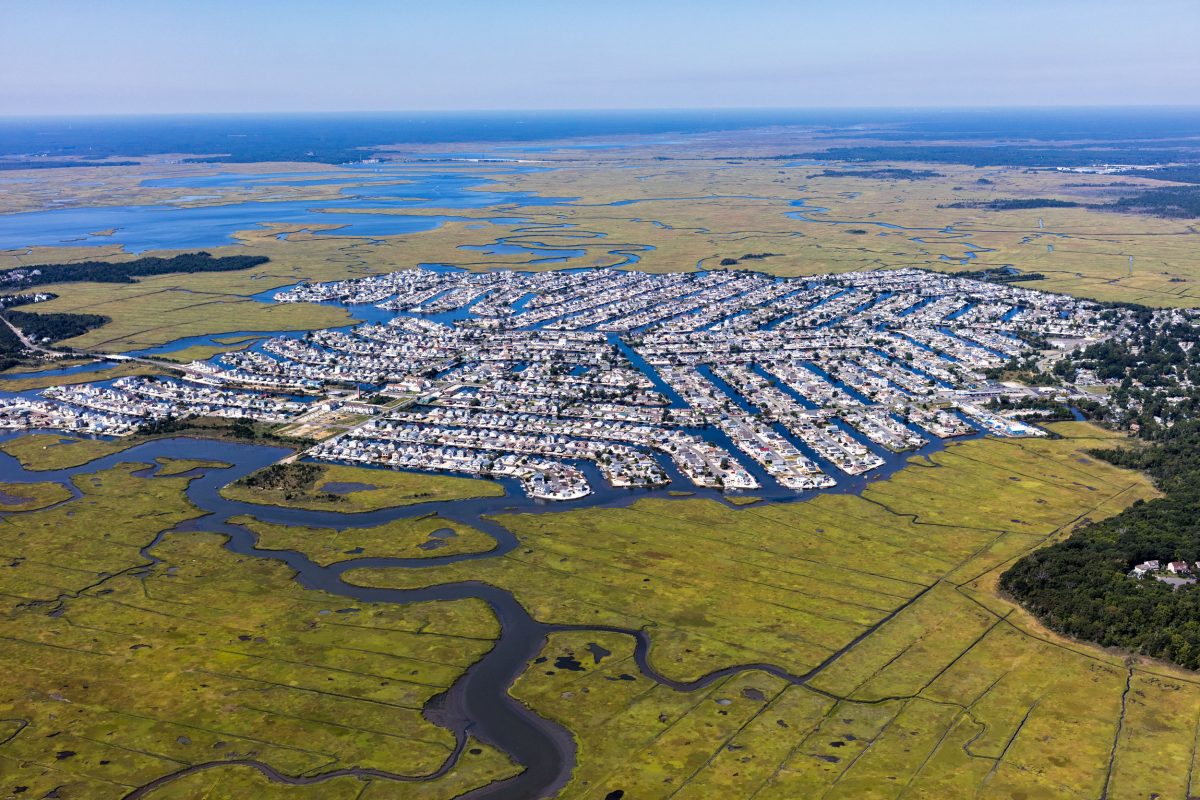 A portion of Egg Harbor Township in New Jersey, carved out of a marsh. Channels cut into the wetland give every homeowner access to the water. A 2015 study predicted that by 2050, 31 percent of Egg Harbor’s land, worth $237.5-million at the time of the report, will be inundated part of every day. 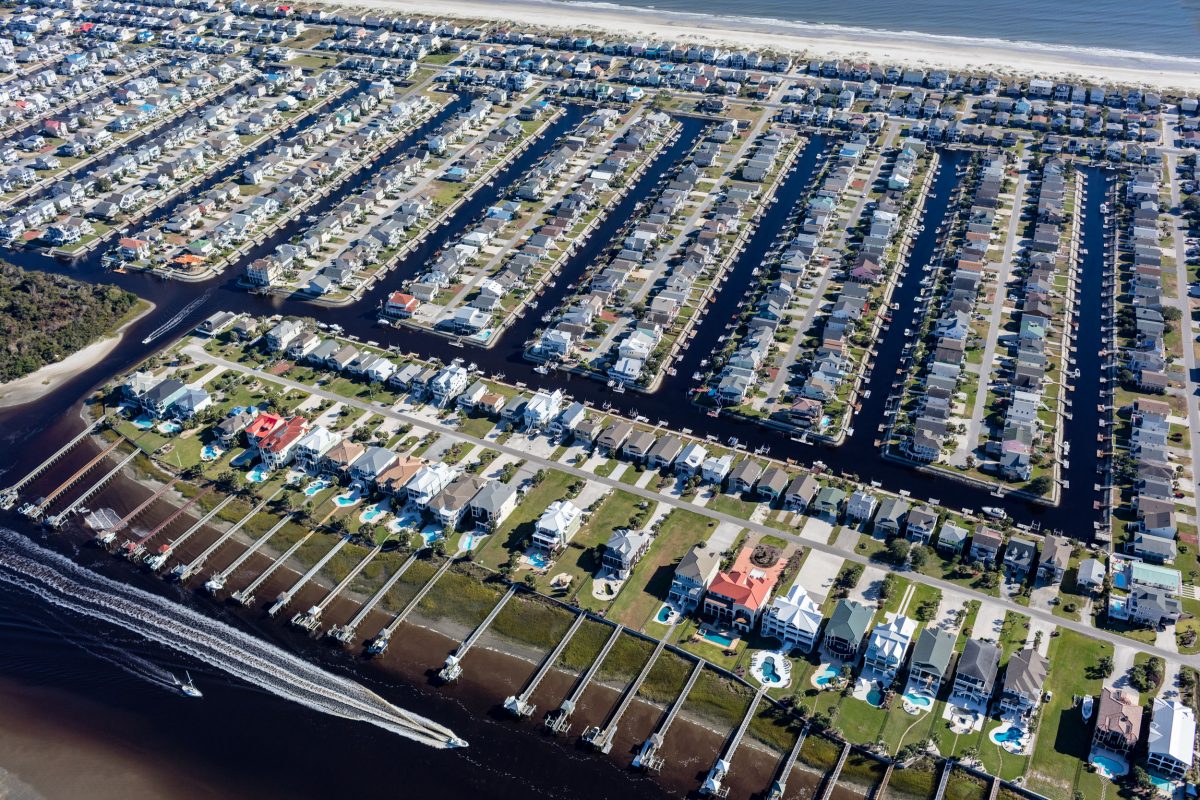 Ocean Isle Beach, a densely packed resort community in North Carolina, sits mostly on a tiny barrier island about as long as six Brooklyn Bridges and less than a kilometer across. Climate Central calculates that, even assuming a moderate scenario for global sea level rise, there’s a 76 percent chance that a storm will swamp the community in over a meter of water before midcentury. Sea level rise makes it likely that most of the island will be permanently underwater by 2100. Living on a barrier island is risky even without the threat of rising seas—the landforms are naturally prone to erode, shift, and wash away. 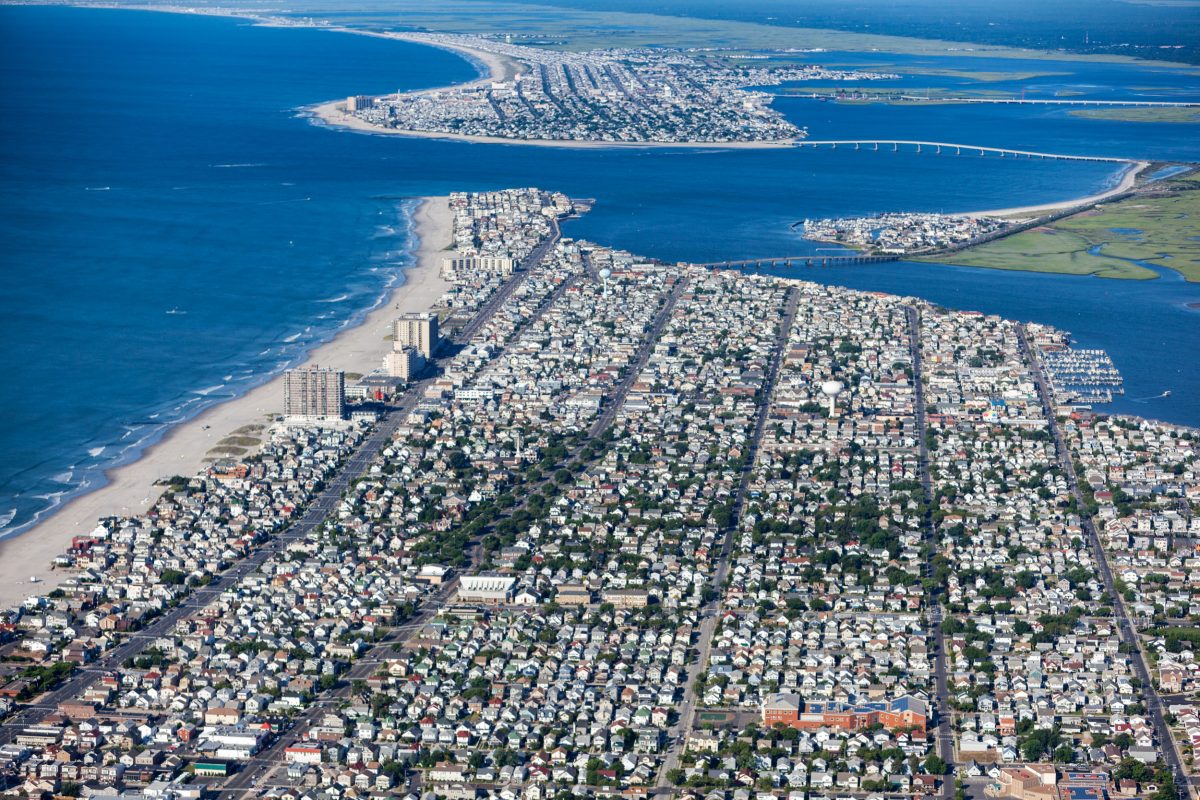 Looking south at Ventnor City on Absecon Island, just south of Atlantic City. “It’s a wonderful place to live,” says MacLean, “until a hurricane strikes or sea level starts to take hold.” The average elevation of the city is less than a meter above sea level, making it unusually vulnerable to sea level rise and storm surges. Minor flooding episodes in Ventnor City are eight times more common today than in the middle of the 20th century. 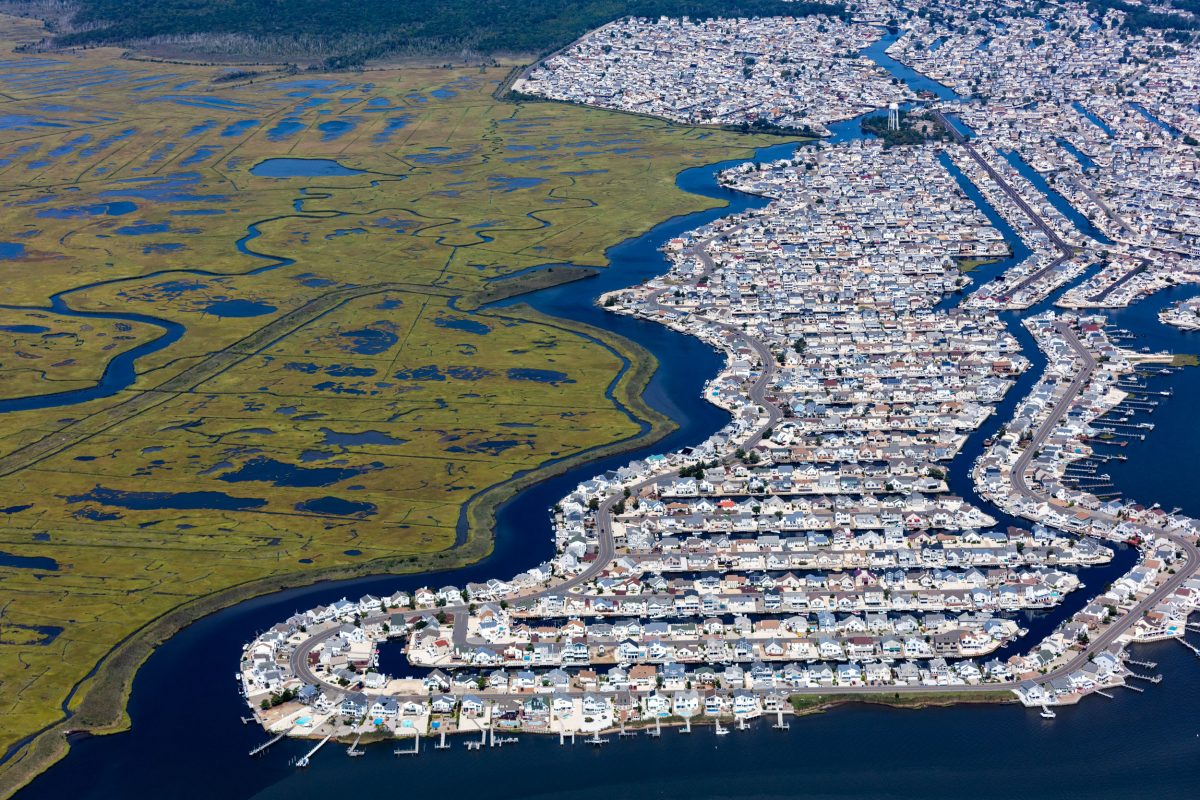 The subdivision Beach Haven West was carved out of a New Jersey salt marsh beginning in 1945. The passage of the state Wetlands Protection Act of 1970 prevented additional loss of wetlands in New Jersey. Scientists with Rutgers University in New Jersey forecast a rise of sea level along the state’s shoreline of as much as 106 centimeters by 2100. That would inundate a large percentage of this community of almost 4,000 people.